Chilly start to weekend, but a nice one; shot of winter temperatures next week 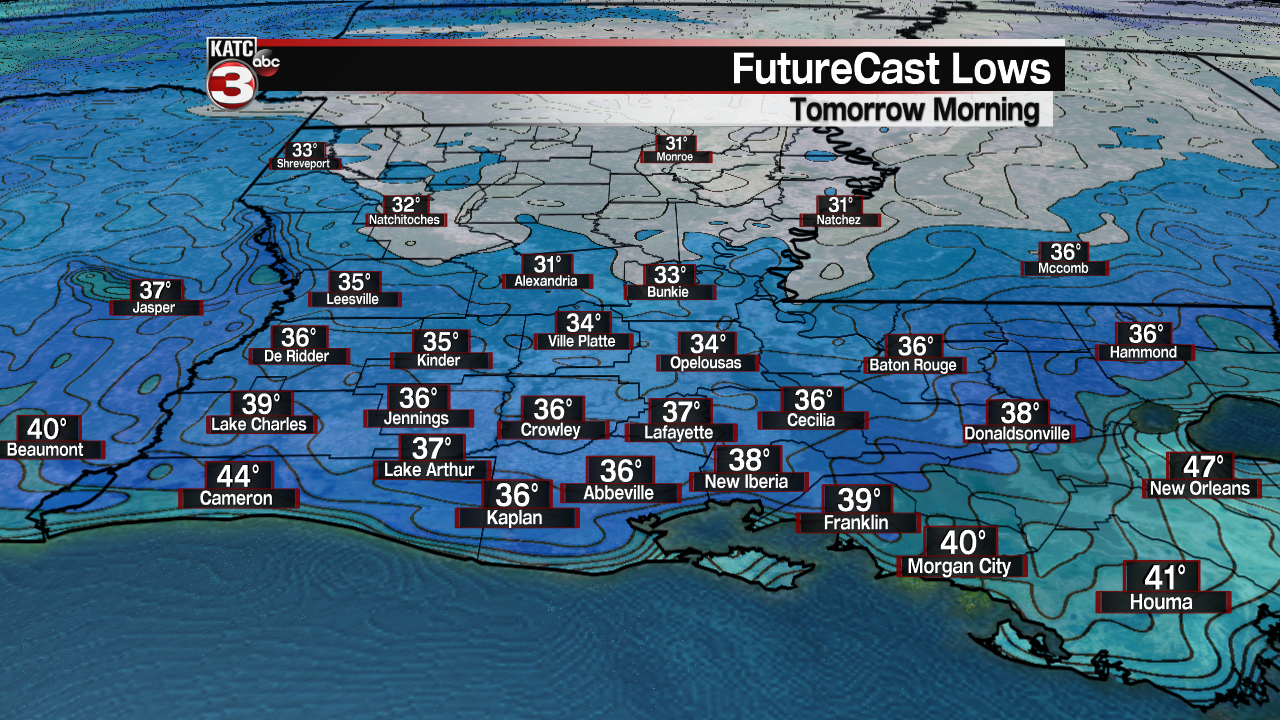 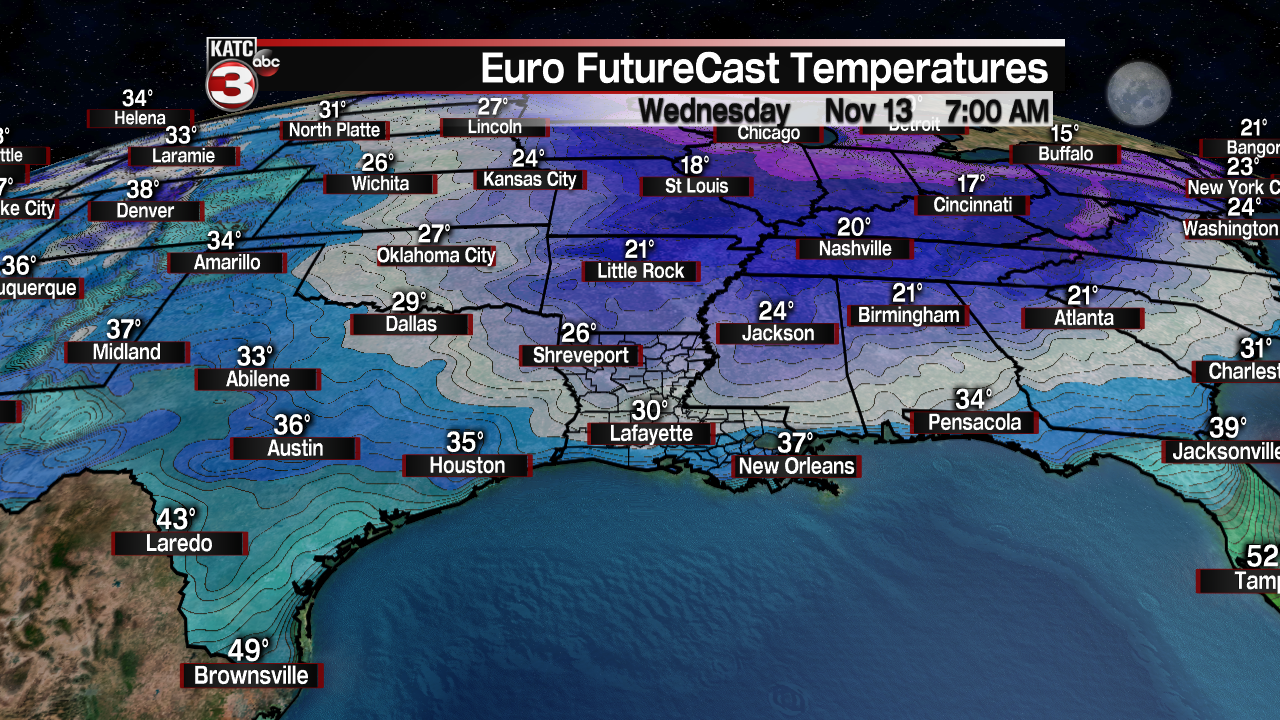 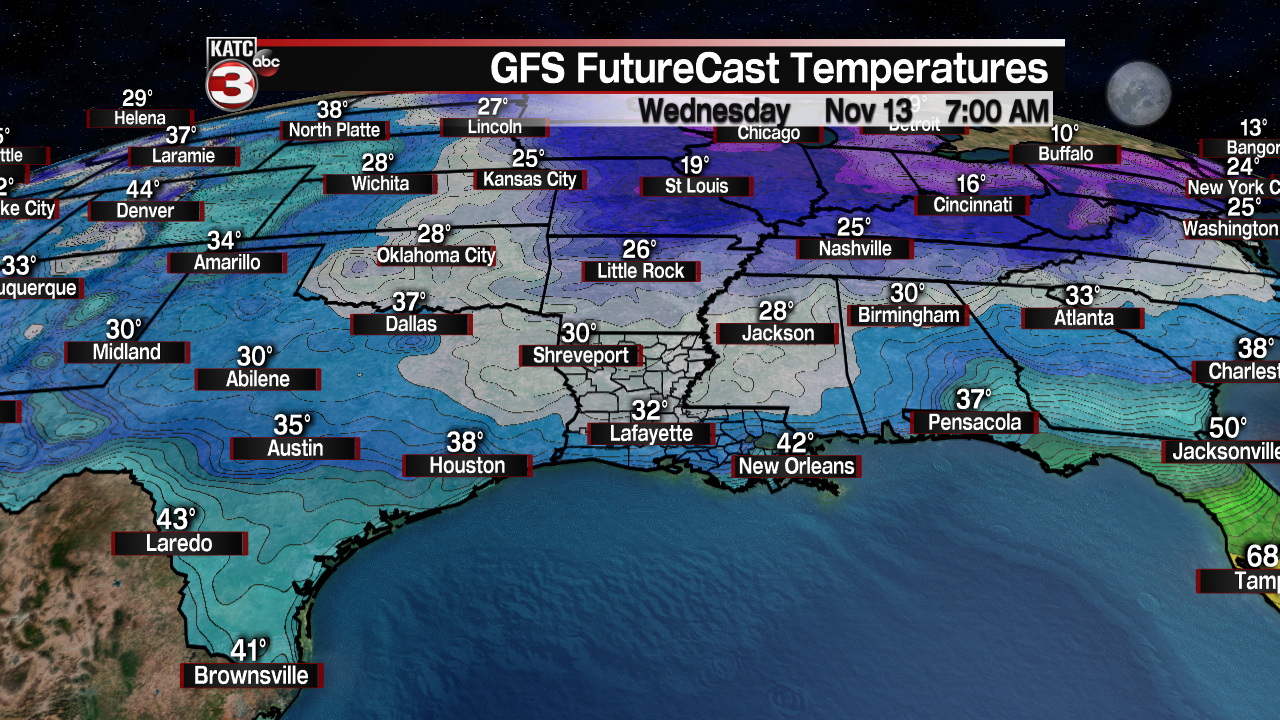 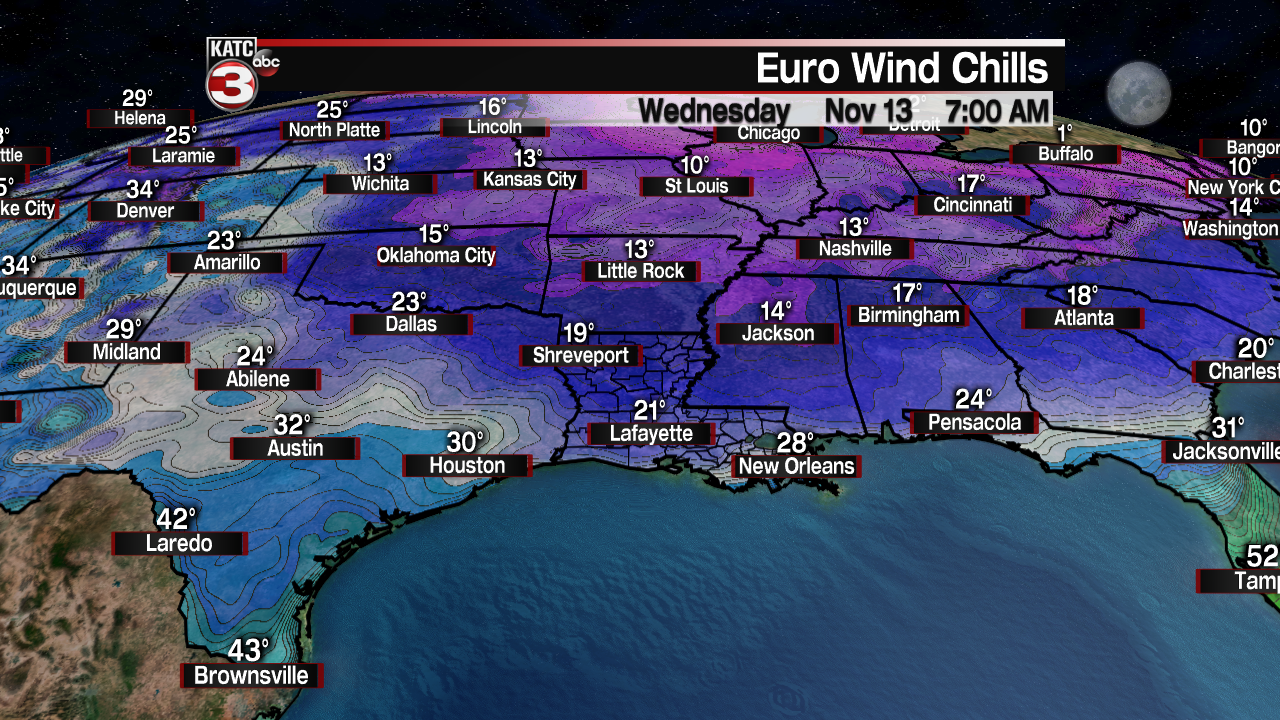 Acadiana's weekend will start off on a chilly note but plenty of sunshine and milder temperatures Saturday into Sunday afternoon will make it a perfect fall weekend.

In the near term, breezy and cold conditions are forecast for Acadiana through Saturday morning as clouds thin and should clear by daybreak.

This will allow temperatures to drop into the mid-30s by morning with readings closer to the low to mid 30s to the north, and mid-upper 30s to near 40, along the coast.

Breezy north winds will make for wind chills in the lower 30s for the entire area overnight. And those winds may keep any frost from forming, but with temperatures close to freezing toward Central Louisiana, some frost will be possible here.

Lots of sunshine Saturday and lighter northerly winds will allow temperatures to warm into the low-mid 60s.

Surface winds will turn more easterly into Saturday night so we likely won't be as cold, but readings in the upper 30s to lower 40s will be possible, along with the risk of some patchy frost...especially in the northern Acadiana parishes.

Look for more sunshine Sunday with temperatures reaching the lower 70s for an afternoon high...which is still a few degrees below the normal of 74F for this time of year.

Normal overnight lows this time of year are in the lower 50s.

And after Monday, it appears that our temperatures may be more representative of colder periods found in January as the southern flank of a ridge of high pressure with arctic origins drops into the area Monday night into Tuesday.

Ahead of the cold front temperatures will rise into the mid-70s Monday along the chance of a few showers developing later in the day.

And like our recent front, periods of rain will be more likely behind the front overnight Monday and tapering early Tuesday.

Temperatures will drop into the upper 30s to lower 40s Tuesday morning and may stay there most of the day as models now are keeping us with cloudy skies for the days that follow.

In concert with the expected cloud cover, temperatures may not drop as low as advertised earlier this week with readings possible closer to the lower 30s vs mid-upper 20s Wednesday morning.

Nonetheless, it will feel very cold Tuesday night into Wednesday morning with wind chills likely flirting with the upper teens to lower 20s!

There won't be any significant moisture for any wintry precipitation during our mid-week cold period, but chilly rains appear to be a good bet into Thursday as low pressure is expected to cranking in the Gulf and then move off to the northeast.

Wintry weather will be possible however, for areas up into Arkansas and points northeastward with that system...but we're still nearly a week away for any forecast accuracy at this point.

Looking ahead to the latter part of the 10 Day forecast it appears that Acadiana will be the beneficiary of another sunny and cool Friday and weekend that follows...but temperatures are expected to stay below "normal" into the first part of the third week of November.

The colder than normal temperatures that Acadiana will see over the next week plus has no bearing an whether it will be a colder than normal winter...but it's not a bad start...especially for those who are wishing for better chances at winter weather "events" down the line!

The last time we had similar temperatures in November was for the winter of 2014/2015 when there a couple of freezes in mid-November, none that December, but a handful of freezes into the following January and February each...which was overall deemed for the most part, a near "normal' winter.

The winters in Acadiana since, in spite of have some limited cold outbreaks, have all been above normal during the periods of December through February.