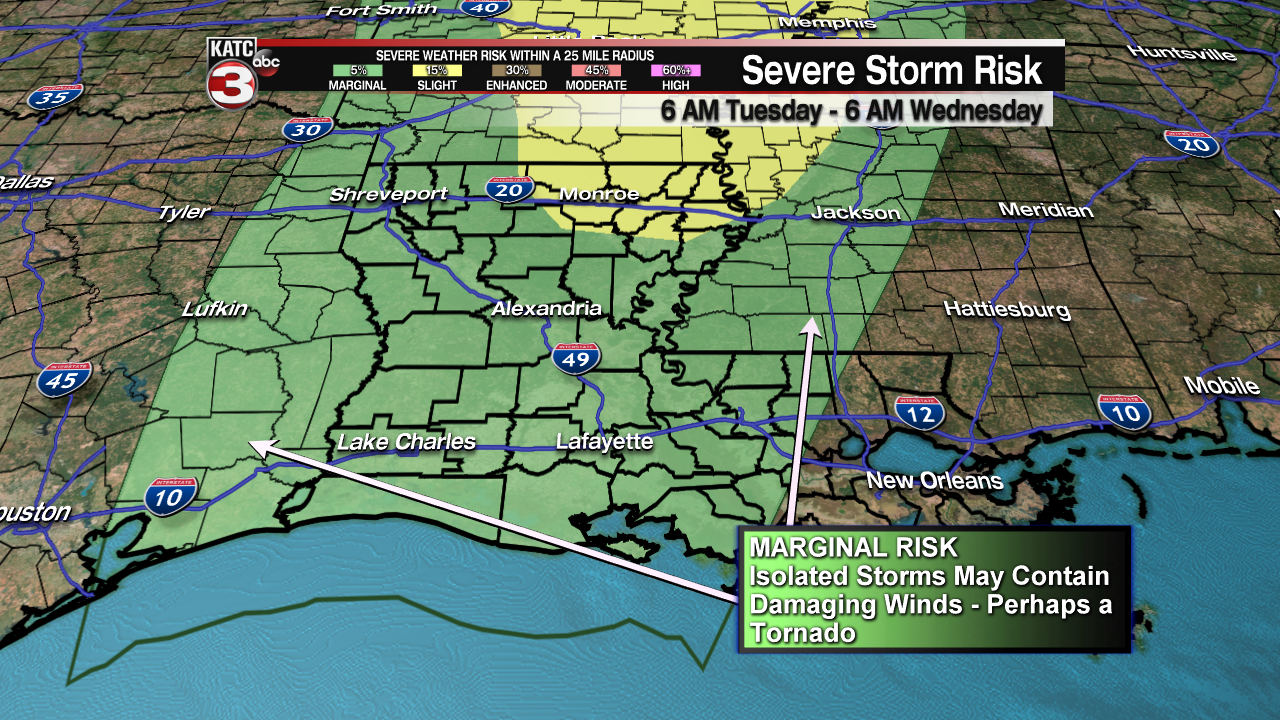 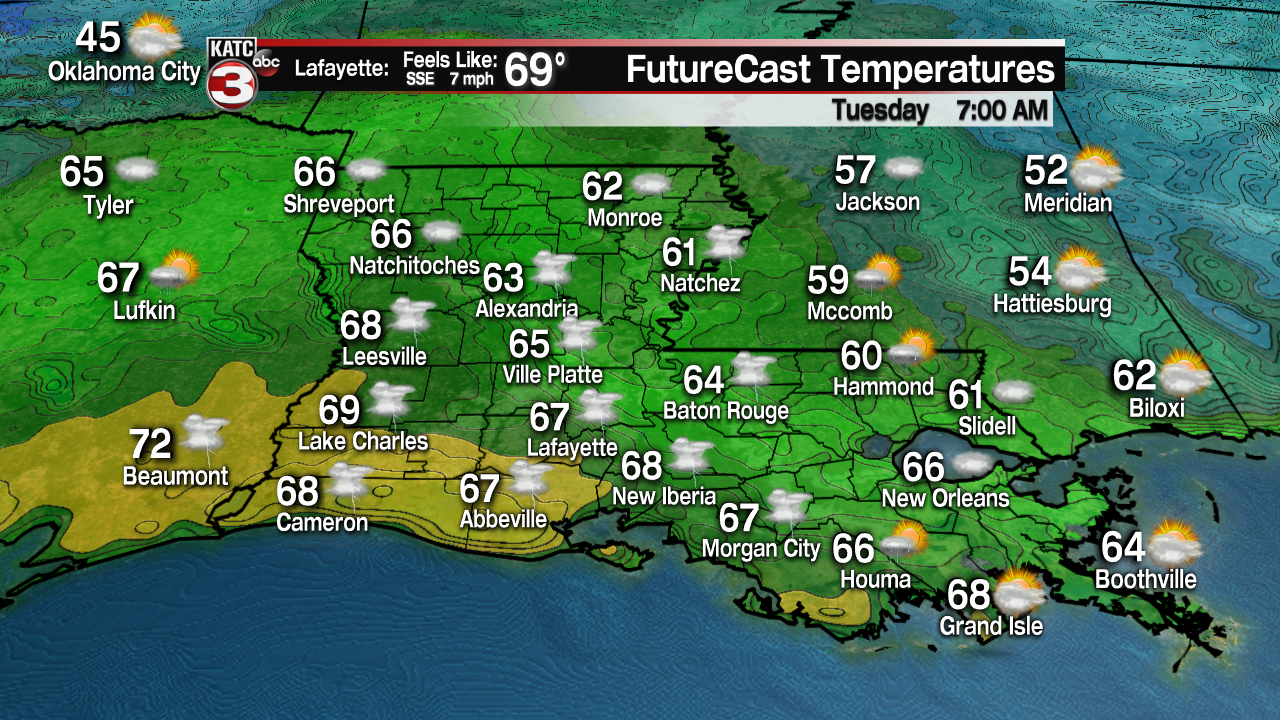 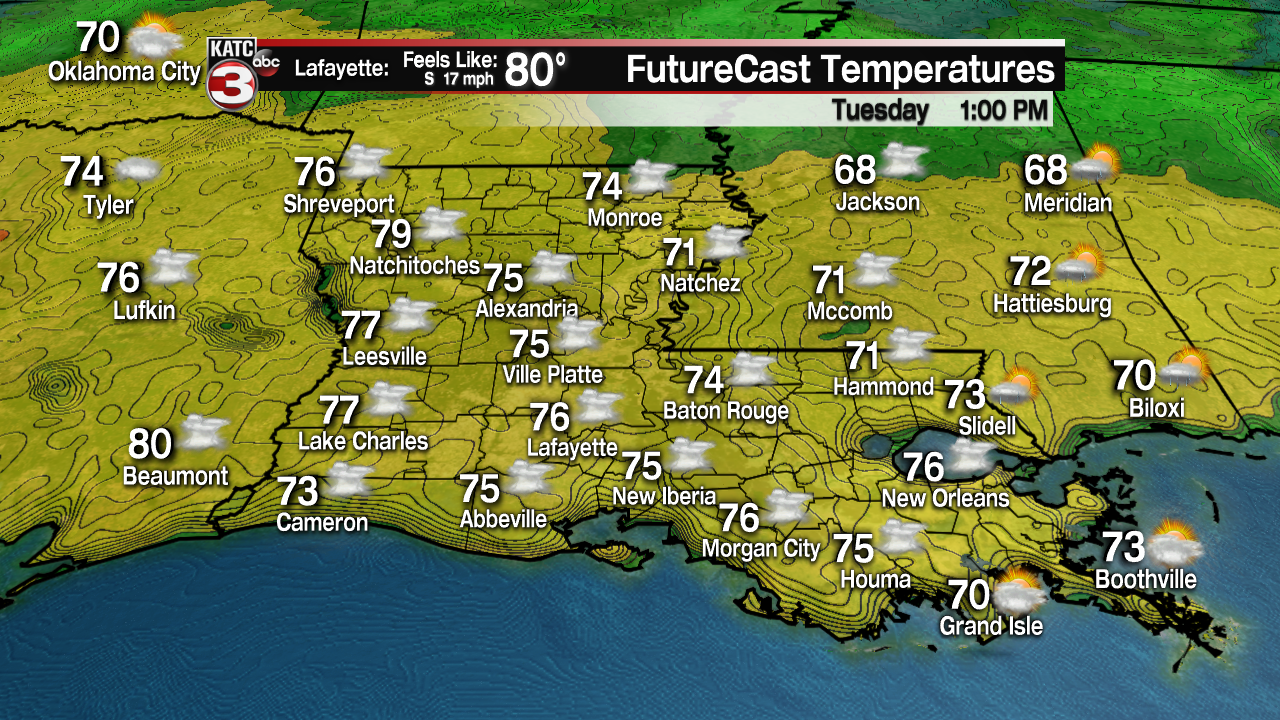 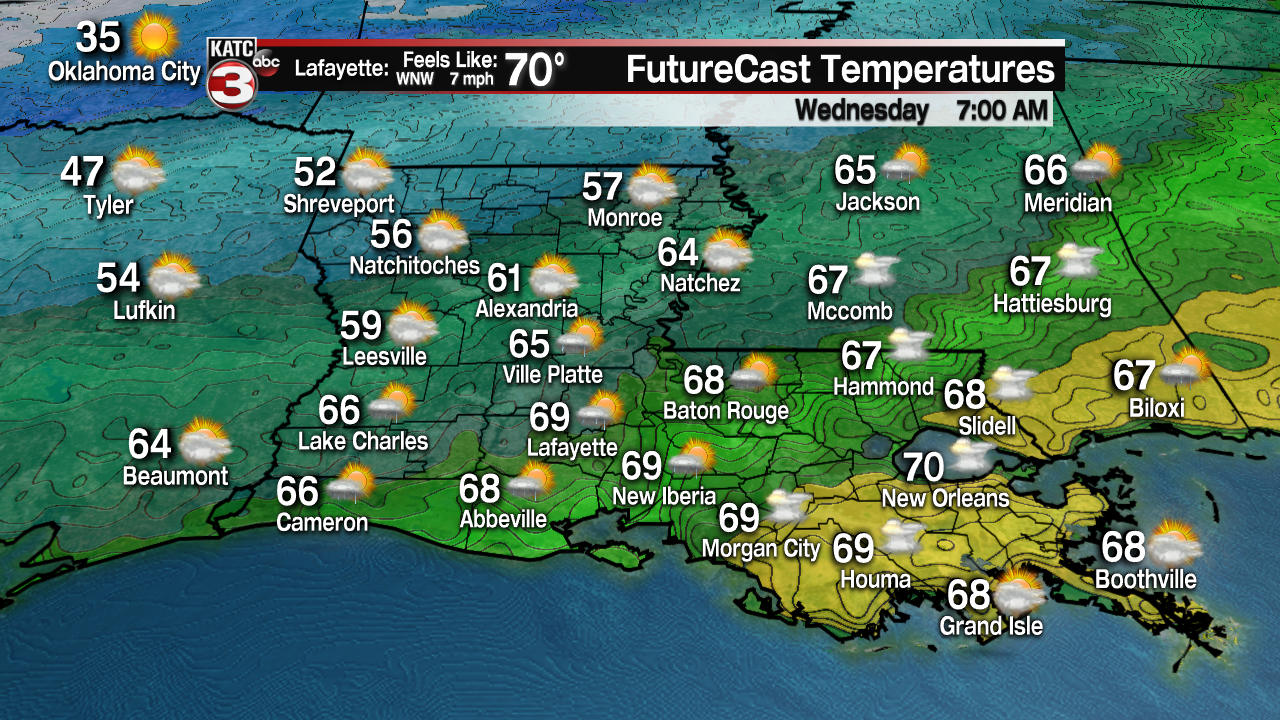 Milder temperatures courtesy of breezy southerly winds ahead of a frontal boundary are in store for Acadiana Through Tuesday, along with the chance of scattered showers and possibly a few thunderstorms.

Highest chances of rain and a few storms will come ahead of a cool front Tuesday night with activity ending by daybreak Wednesday.

While the Storm Prediction Center has all of Acadiana hatched in for a marginal risk of a few severe storms Tuesday into Tuesday night, the greatest risk of severe weather will be farther to the north into Northeast Louisiana, portions of Mississippi and Arkansas and into Missouri.

The main concern for Acadiana would be the marginal risk of one of two isolated severe storms that might be capable of producing wind damage during the afternoon...with the risk of a few severe storms continuing until the pre-frontal line of showers and storms moves through the area into late Tuesday night.

And although the dampening effects of the Gulf of Mexico marine air usually squelches severe weather potentials this time of year, it is less effect against severe storm formation closer toward Western Louisiana where its influences are lessened.

In the near term, look for temperatures to hold in the 60s overnight through Tuesday morning, which will be some 20-25 degrees milder than Monday morning!

Highs Tuesday will top out in the mid-upper 70s.

As mentioned earlier, slightly cooler temperatures will follow the front into Wednesday through Thursday morning, but it won't be too cool.

Thursday and Friday look partly to mostly cloudy and milder with temperatures getting back into the low to mid 70s Thanksgiving Day and the upper 70s for Black Friday.

There will be virtually no chance of rain Thursday and Friday, but better rain chances should develop ahead of a strong cold front that should arrive to the area by late Saturday.

Temperatures before the showers and storms Saturday may top out in the lower 80s but it is expected to turn sharply cooler/colder into early next week.

The weather pattern from Sunday through mid-next week should remain quiet, but as mentioned, rather chilly.

See the KATC 10 Forecast for the latest.

Meanwhile nationally, there the pattern across the U.S. through the Thanksgiving holiday week will be rather stormy on the big Wednesday travel day with rain in the Northeast and big snows moving from the Plains Tuesday into the Midwest & Great lakes Wednesday.

Meanwhile another snow and rain storm system will be impacting the West and the Mountain States Wednesday, with several swaths of rain and snows advancing into the Plains and Midwest early this weekend.

There's certainly good news for skiers for the next 10 days with big snows piling up from the Sierra's eastward into the Rockies and Northern Plains, and portions of the Great Lakes and Northern New England where many areas will see a White Thanksgiving and the promise of more snows to come.