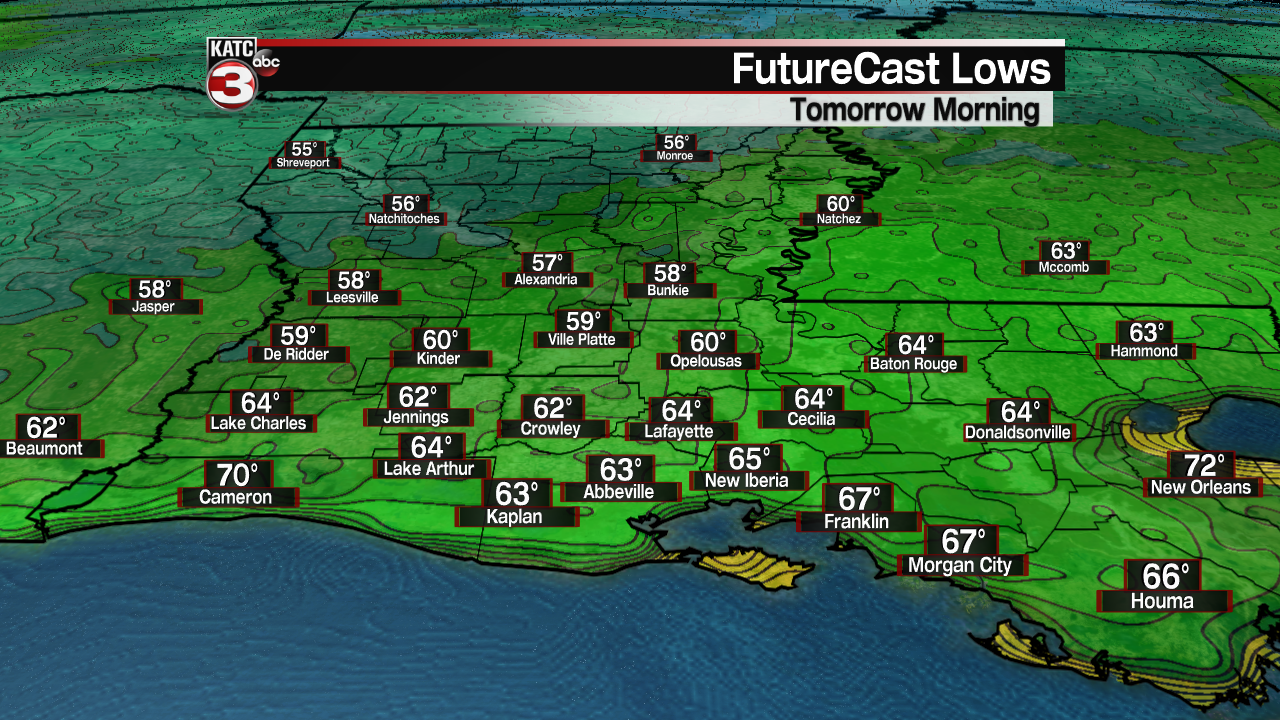 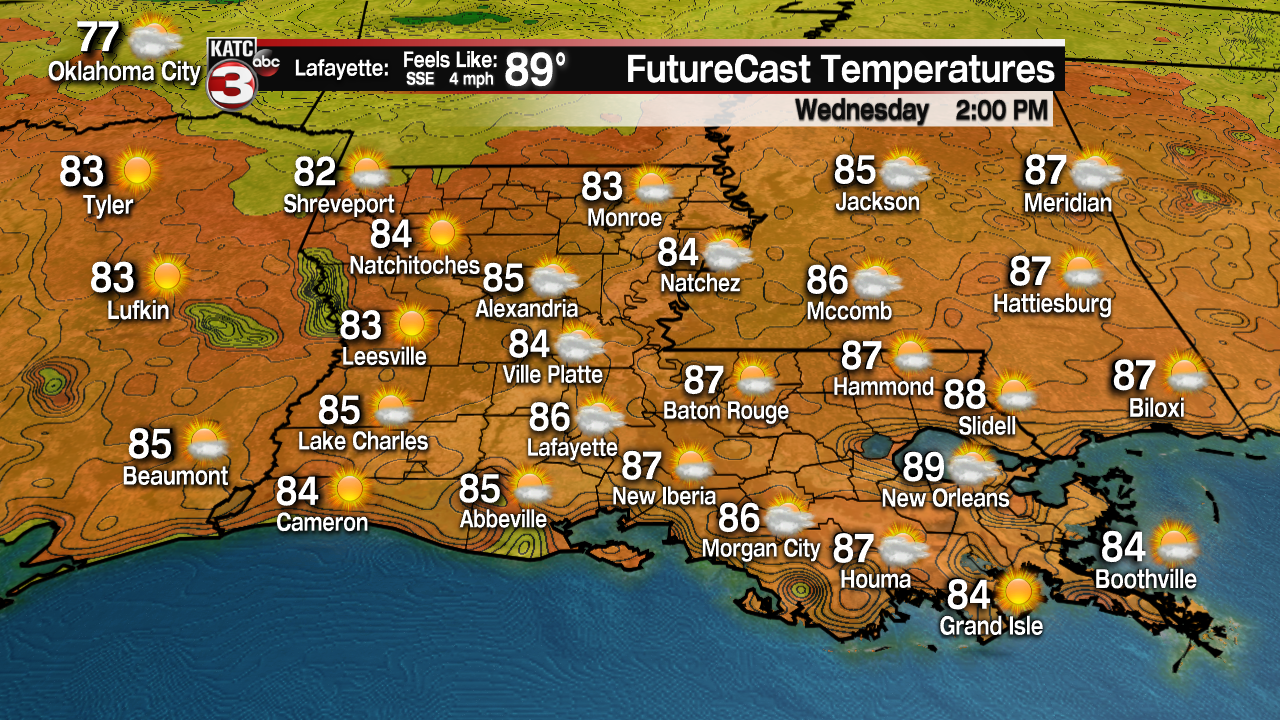 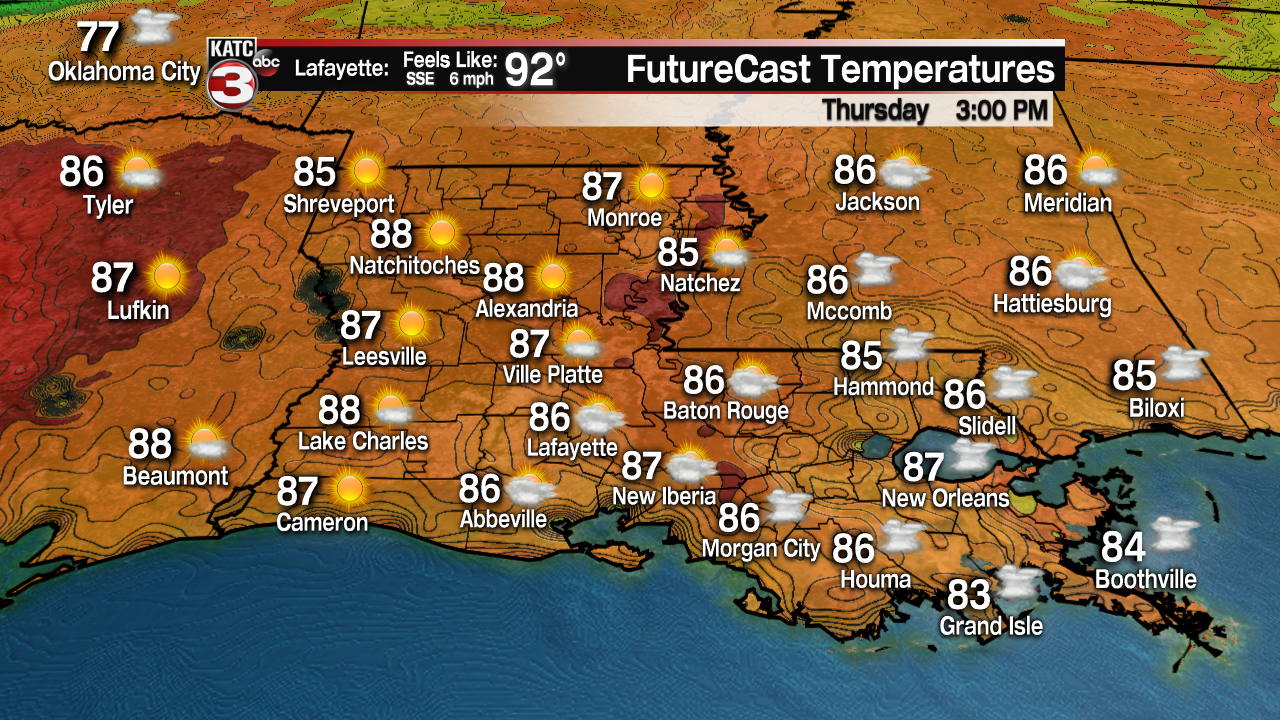 After another pleasant night and morning, Acadiana can expect warmer temperatures for the rest of the week until the next front arrives Friday night.

Temperatures Wednesday will start off in the low-mid 60s across the area but will warm quickly into the mid-upper 80s for the afternoon as southeasterly winds return to the area.

Rain chances should stay low, but not completely at zero for Wednesday, but overall expect a mostly sunny and relatively pleasant, albeit warmer, day.

A few pop-up showers might be possible Thursday afternoon, but there should be a better chance of scattered showers and a few storms by Friday afternoon and especially into Friday evening ahead of our next cool front.

That cool front will push through by Saturday morning leaving some cloudiness in its wake, but intervals of sun should return Saturday afternoon.

The big story will again be the "briefly" cooler temperatures this weekend with highs confined to the fresh lower to possibly mid-70s Saturday after an invigorating start in the upper 50s to lower 60s.

Models are at odds on how quickly it will warm back up Sunday, but for now we're leaning to the mid-50s for a morning start Sunday with a finish in the warmer, but still comfortable, lower 80s for the afternoon.

Overall the weekend looks quite nice! Consult the 10 Day Forecast for the latest.

Warmer and more humid conditions are expected to return early next week with the chance of scattered showers and a few thunderstorms Monday through Wednesday.

Another front will be possible by next Wednesday night/Thursday morning.

Elsewhere in the tropics, while the National Hurricane Center is monitoring three areas in the Atlantic Basin for development, none of these areas are expected to threaten the Gulf of Mexico.

Meanwhile, on the other side of the world, another top shelf, Category 5 storm known as Super Typhoon Hagibis (with 160 mph winds as of late Tuesday) is expected to remain a formidable storm threatening Japan and perhaps Tokyo with hurricane conditions (perhaps up to 100 mph winds) by this weekend.

Finally on a climatological note:

The question I'm getting most of late, outside of when can we expect cooler weather, is that can we say that tropical season is over for Louisiana?

Well we can state with good certainty there should be no Gulf threats through mid-month...

And given the statistic that there have been only 7 named storms (3 of them hurricanes) over the last 100 years that have come within 250 nm of Lafayette between October 14th and 31st, yields only a 7% chance of a threat nearby.

And the odds of a major impact locally (a system closer than 100 nm to Acadiana) would be likely closer to 1-2%...so yes, the statistics are leaning in our favor for sure!

This by no means there won't be any additional storm threat somewhere in the Gulf through the rest of the month...but the odds for Acadiana impacts are dwindling indeed!

Juan in 1985 is was certainly an "outlier" with two loops in Acadiana and three landfalls in late October of 1985!