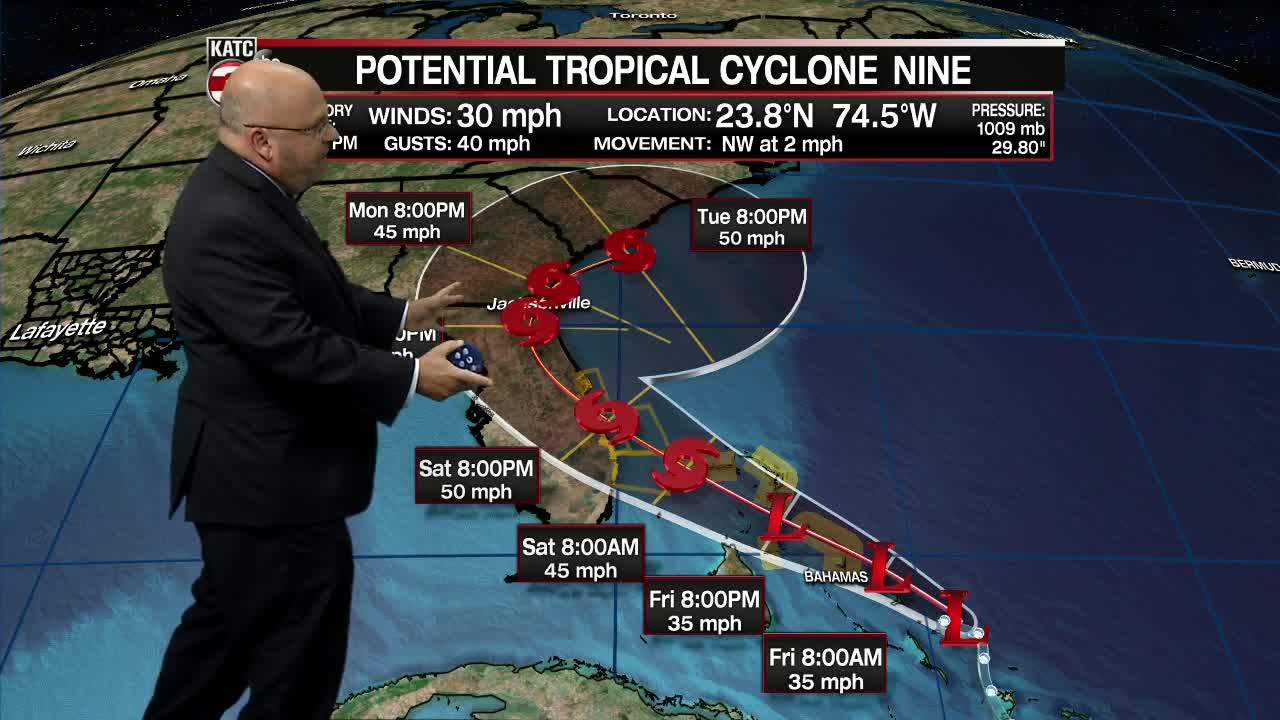 The National Hurricane Center (NHC) began issuing advisories on Potential Tropical Cyclone #9 Thursday afternoon in anticipation of a tropical depression or storm developing in the vicinity of the Bahamas over the next day or two.

Because the system has had a number of upper level conditions prohibiting it's development, location of a closed center has been hard to find, and this has made for some erratic computer model forecasts over the last couple of days.

Per the NHC: "given the model discrepancy, both the track and intensity forecasts are highly uncertain..."

It should be noted that the last two runs of the European Model have this system becoming a hurricane and staying offshore the Southeast U.S. Coast, but for now, the Hurricane Center is forecasting this system to become a tropical storm, with a potential landfall along the Florida and Georgia Coasts...then a move back out to sea.

The latest Euro Model also has this system possibly threatening portions of the Northeast and/or New England in some shape or form by the end of next week...with potentially another system following on it's heels in about a week.

If the disturbance is upgraded to a tropical storm, it will be named "Humberto" (oom-BAIR-toh).

This system should have no impact on the Gulf of Mexico.

Meanwhile, Acadiana's weather is looking hot and mostly dry with minimal rain chances into the weekend.

Look for highs Friday into the weekend to top out in the mid-90s with rain chances near 10% through Saturday.

An upper level low traversing westward across the Gulf of Mexico over the next few days may sling a little tropical moisture toward Acadiana Sunday into Monday, but for now, rain chances won't go much higher than 20-30%.

Little change is anticipated in our weather pattern through much of next week with mostly sunny to partly cloudy skies accompanied by rain chances no higher than 10-20% on any given day.

A cool front, hopefully, will approach the region for next weekend, but the extent of the coolness of that front remains up for debate, but anything will be better than the mid-90s that are forecast for the better part of the next 7-9 days!