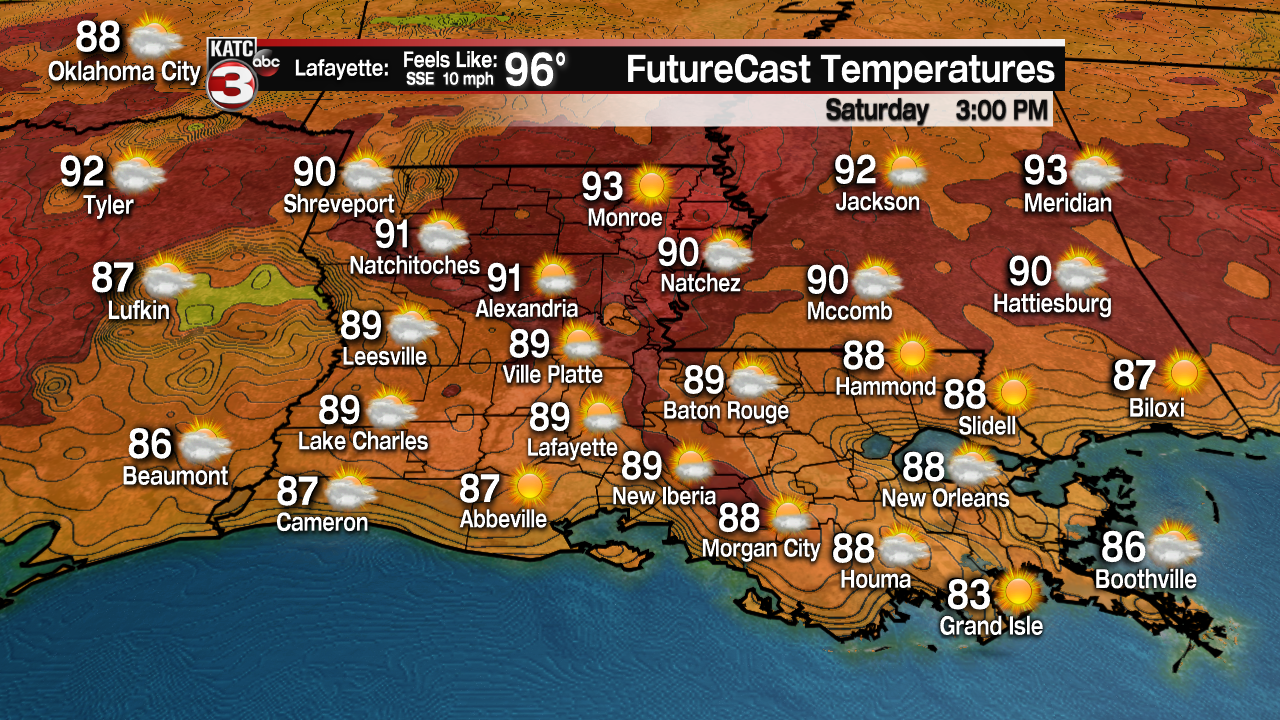 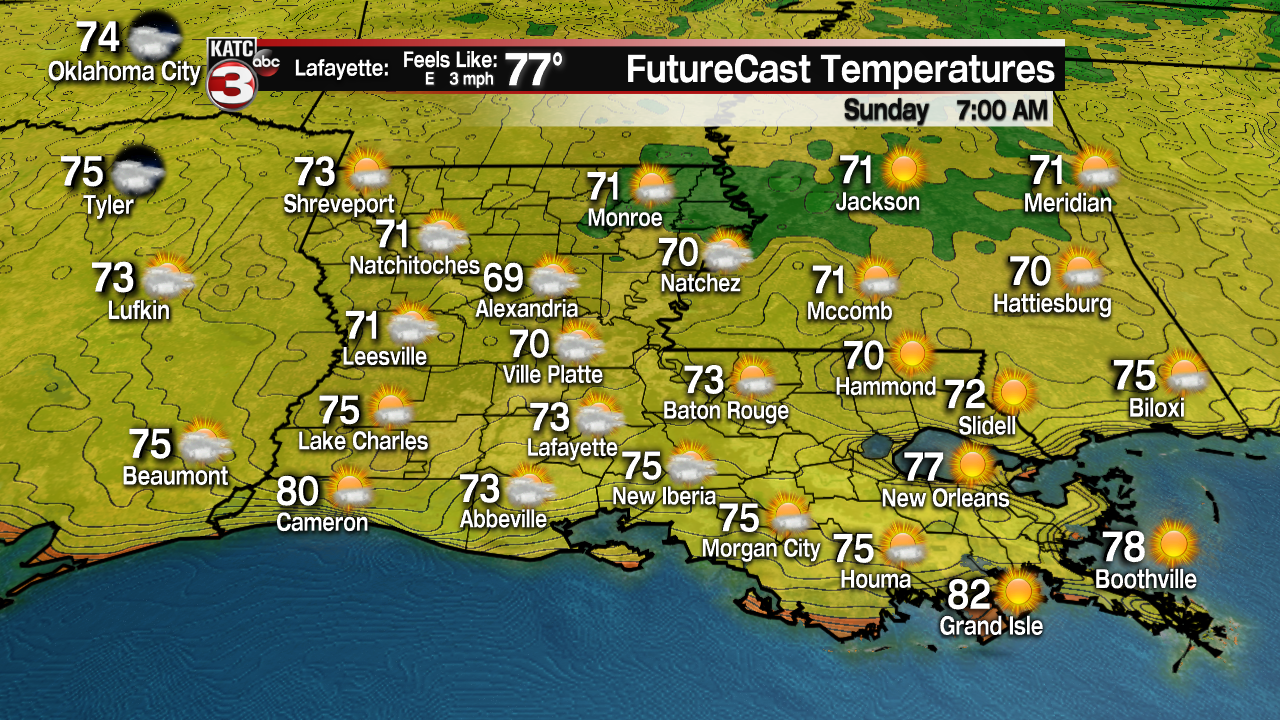 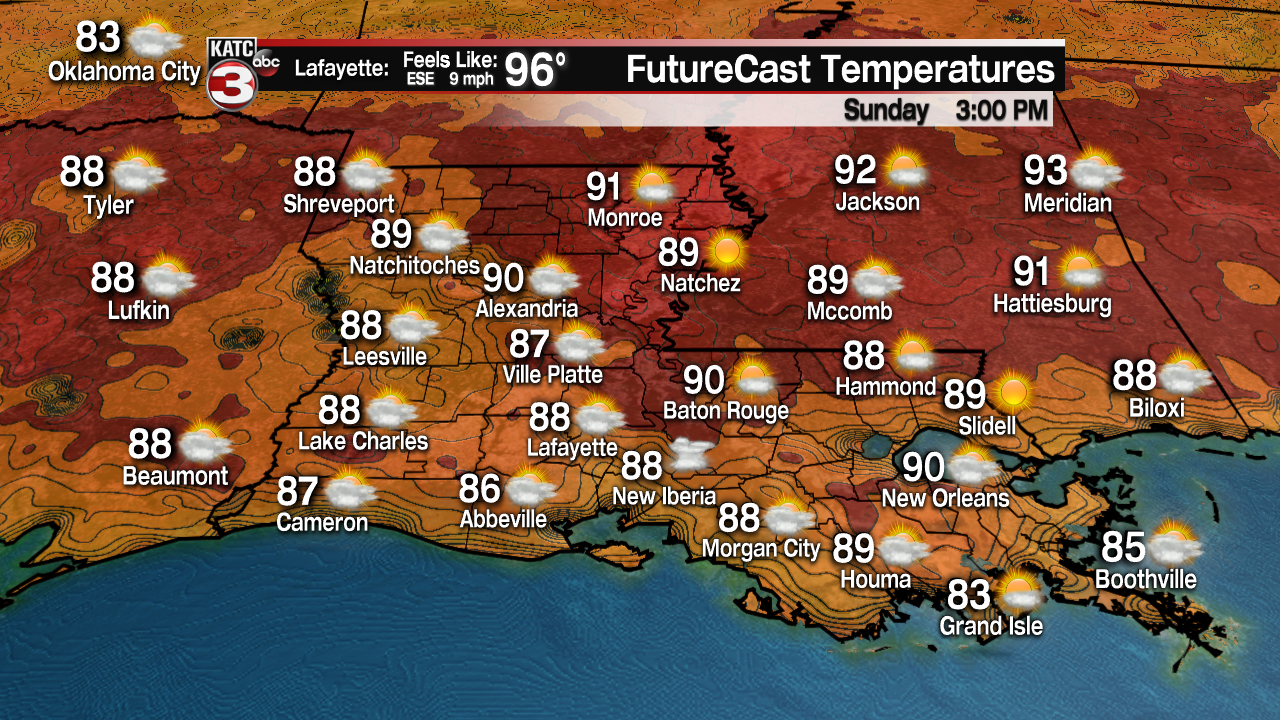 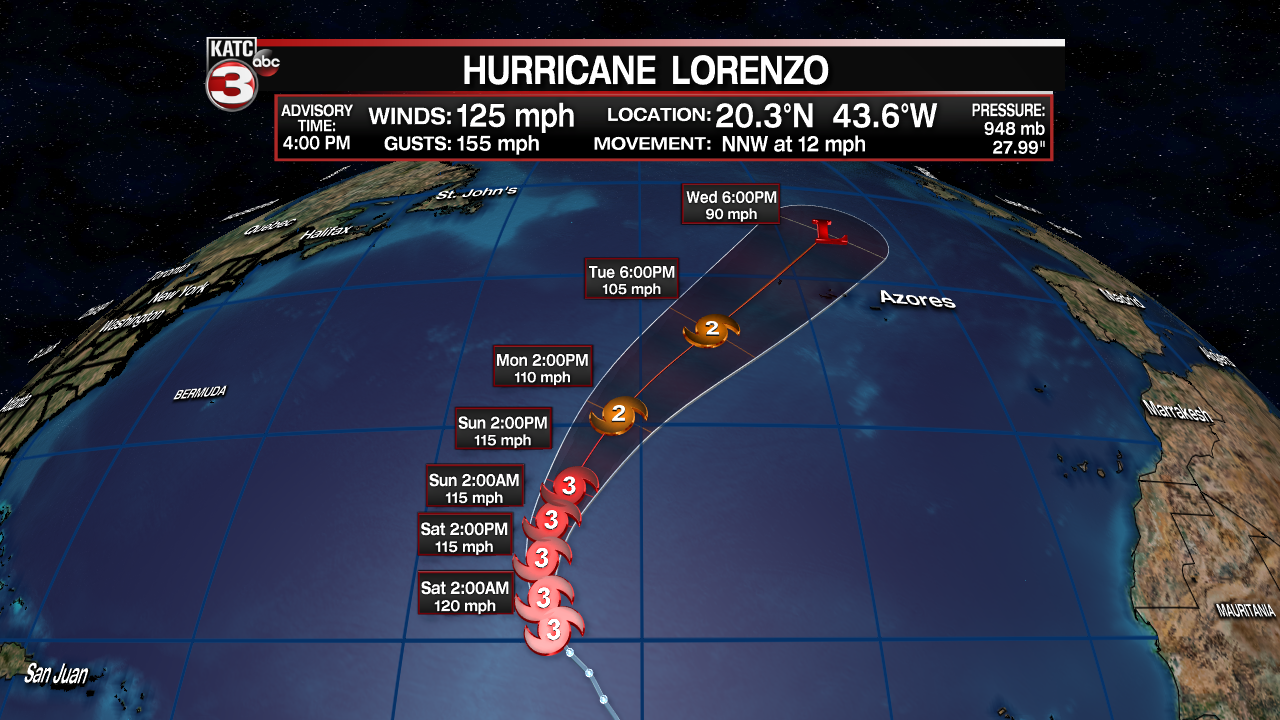 Weather-wise, the first days of October in Acadiana will be very similar to the last days of September as a dominant ridge of high pressure will maintain above normal temperatures and below normal rain chances.

Under a sun and cloud mix, look for highs this weekend reaching near 90 with heat indices inching upward courtesy of southeasterly winds.

Heat index values during Saturday and Sunday afternoons will be in the mid-, to in some spots, upper 90s.

Night time lows will also nudge a little closer to the mid 70s this weekend along with the chance of some patchy morning fog with the additional Gulf moisture in the region.

Rain chances remain scant to none this weekend with perhaps a 5-10% chance of an isolated afternoon shower closer to Southwest Louisiana into Southeast Texas.

High pressure aloft is expected to strengthen into next week, which should nudge our daytime highs from the lower 90s to perhaps into the mid-90s by the end of next week...if so, we will be getting closer to some record temperatures, if not for Acadiana, certainly for portions of Louisiana.

Change is expected toward the latter part of the 10 day forecast, as deeper tropical moisture that should advance into the Gulf of Mexico late next week could become the impetus for some shower or thunderstorm activity at some point next weekend.

Meanwhile, in the increasingly desperate search for any significant cool fronts for Acadiana, both the GFS and Euro models offer little hope through the next 10 days, although the GFS is going for one arriving here on or around October 8th...while the Euro stalls any fronts short of our area over the same period.

Eventually, it appears that "less hot" weather (as we can't call it cooler) may gradually edge into the area from the northeast after next weekend.

At this point we are not expecting anything refreshing, other than what the GFS model is advertising, but we still cannot trust 10-12 day model forecasts.

And incidentally, the Euro Model hints at some broad low pressure in the Gulf developing in the 9-11 day period...which would not be unsurprising given the pattern over the over the last and next couple of weeks.

Speaking of the tropics, the National Hurricane Center (NHC) downgraded Tropical Depression Karen to a remnant low with the system expected to completely dissipate over the next few days, while Major Hurricane Lorenzo appears to have maxed out Thursday, with Friday afternoon sustained winds down to 125 mph in this very large storm Categroy 3 storm in the Eastern Atlantic.

Lorenzo has been so big, it has generated swells that reached portions of Northeast South America Friday, and the Windward Islands Friday night.

Lorenzo could pose some sort of storm threat, perhaps not as a hurricane, but as a storm system still capable of producing 90 mph winds just to the west of the Azores Tuesday into Wednesday of next week.

There are no other suspect areas that the NHC is monitoring, but there will be plenty of deep tropical moisture pooling from the Western Caribbean into portions of the Gulf of Mexico roughly a week or more down the road, and this will be the area to watch...which is also the climatologically favored area for development during the month of October.