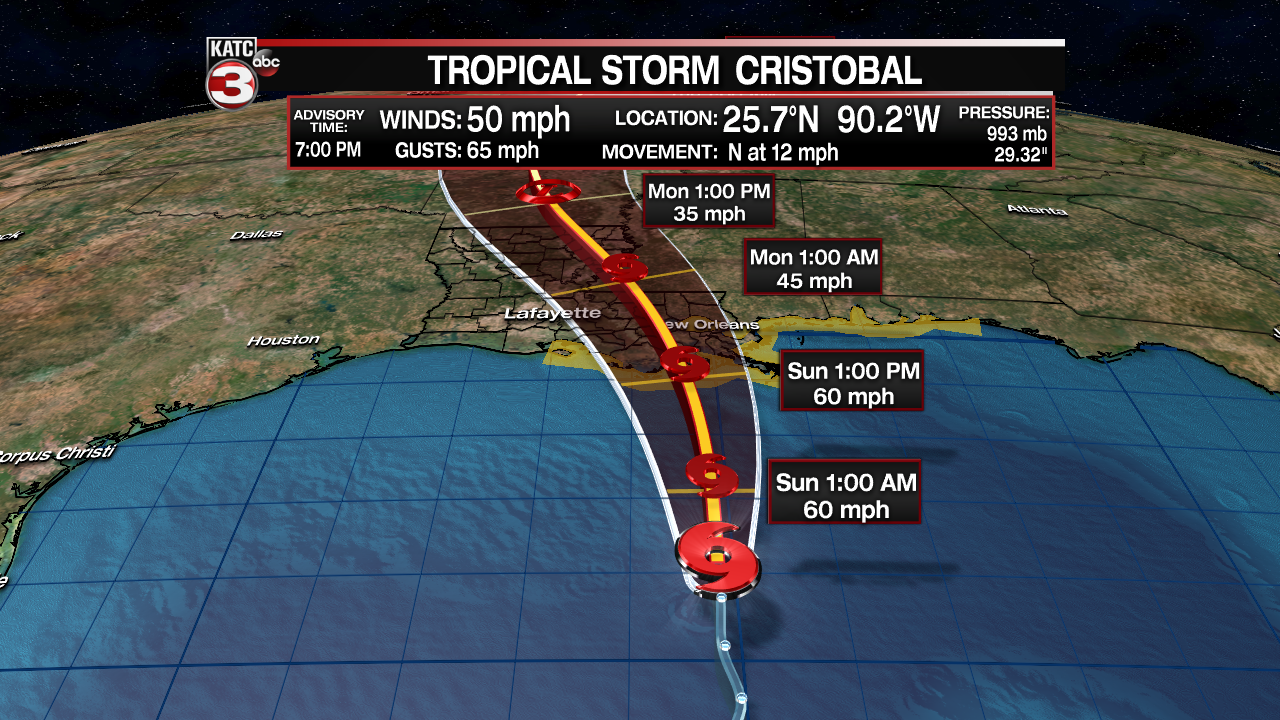 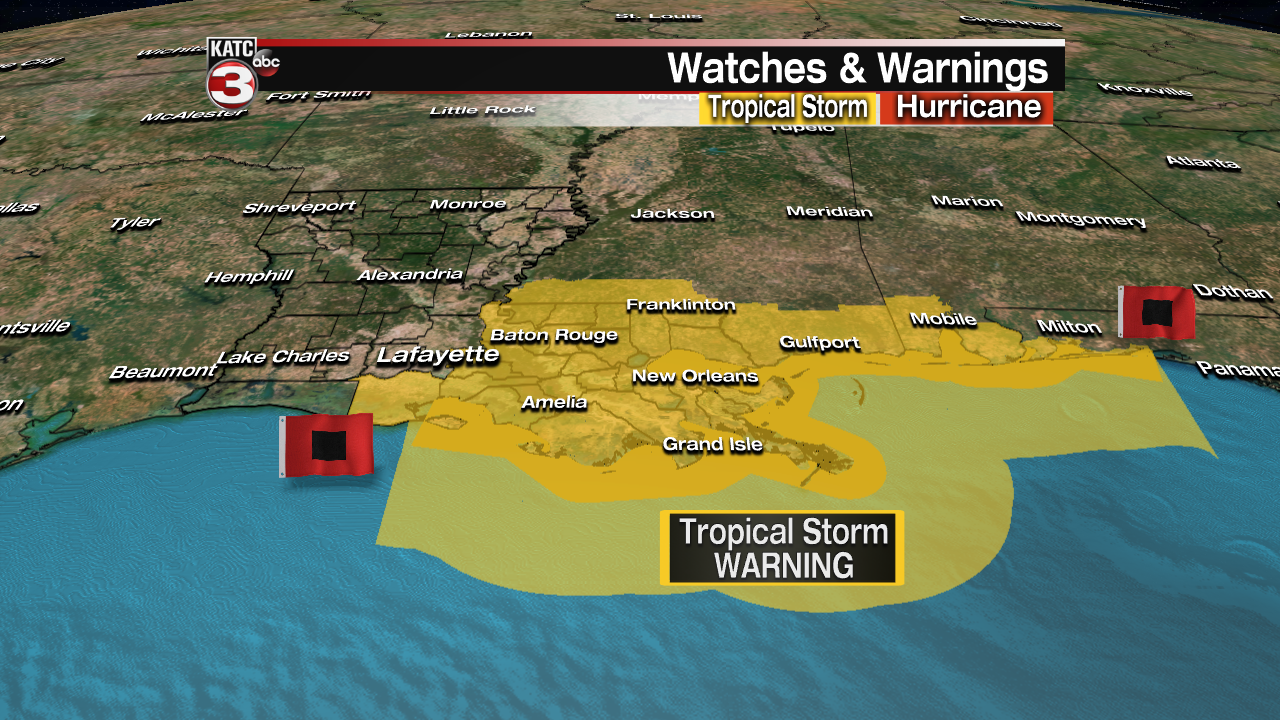 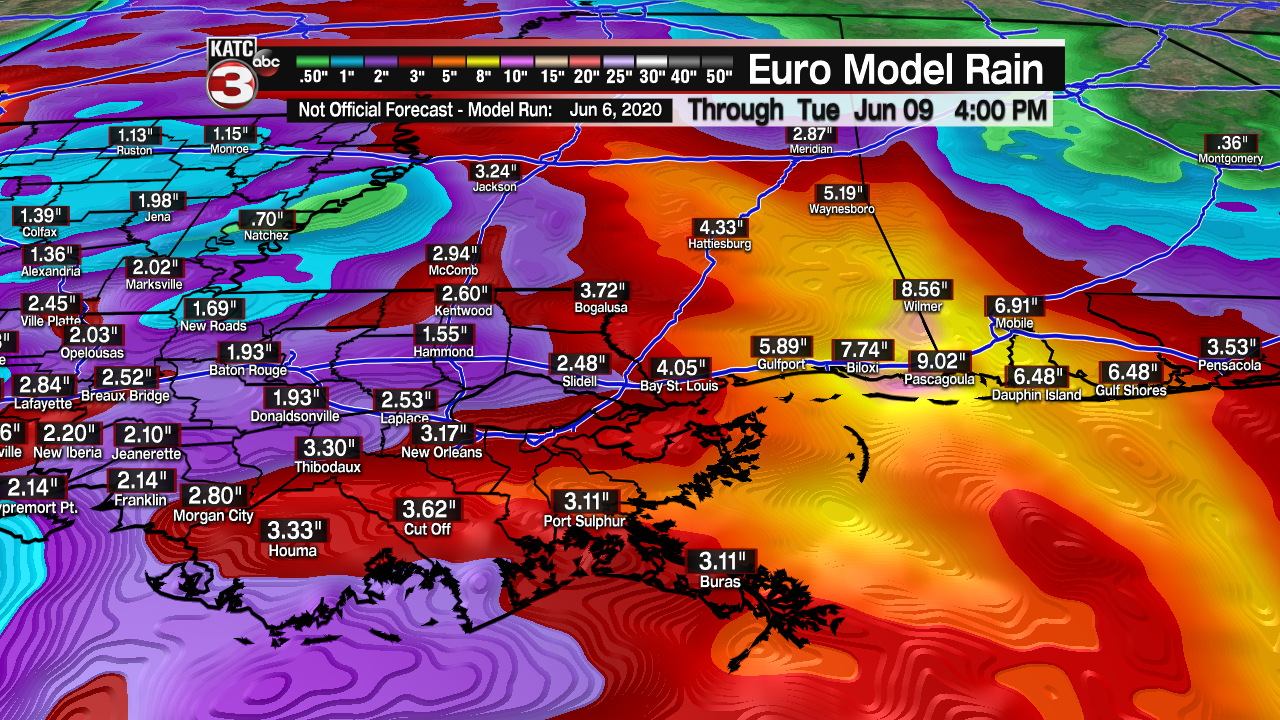 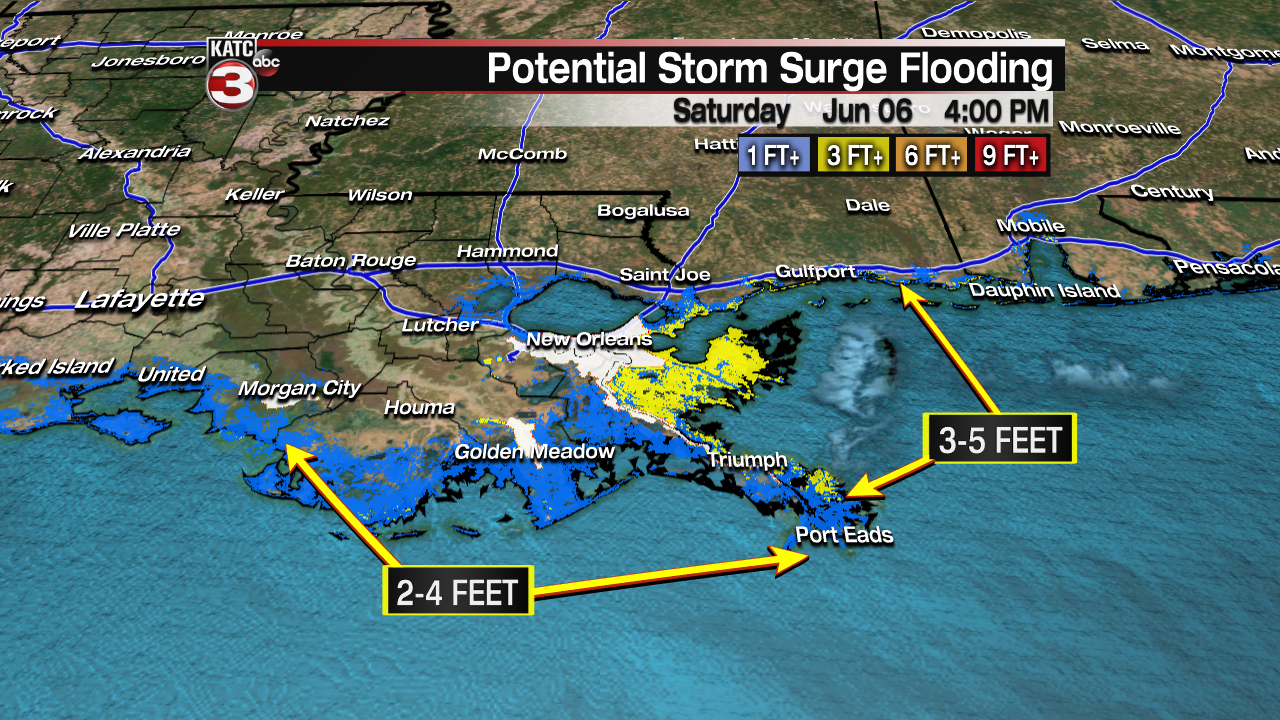 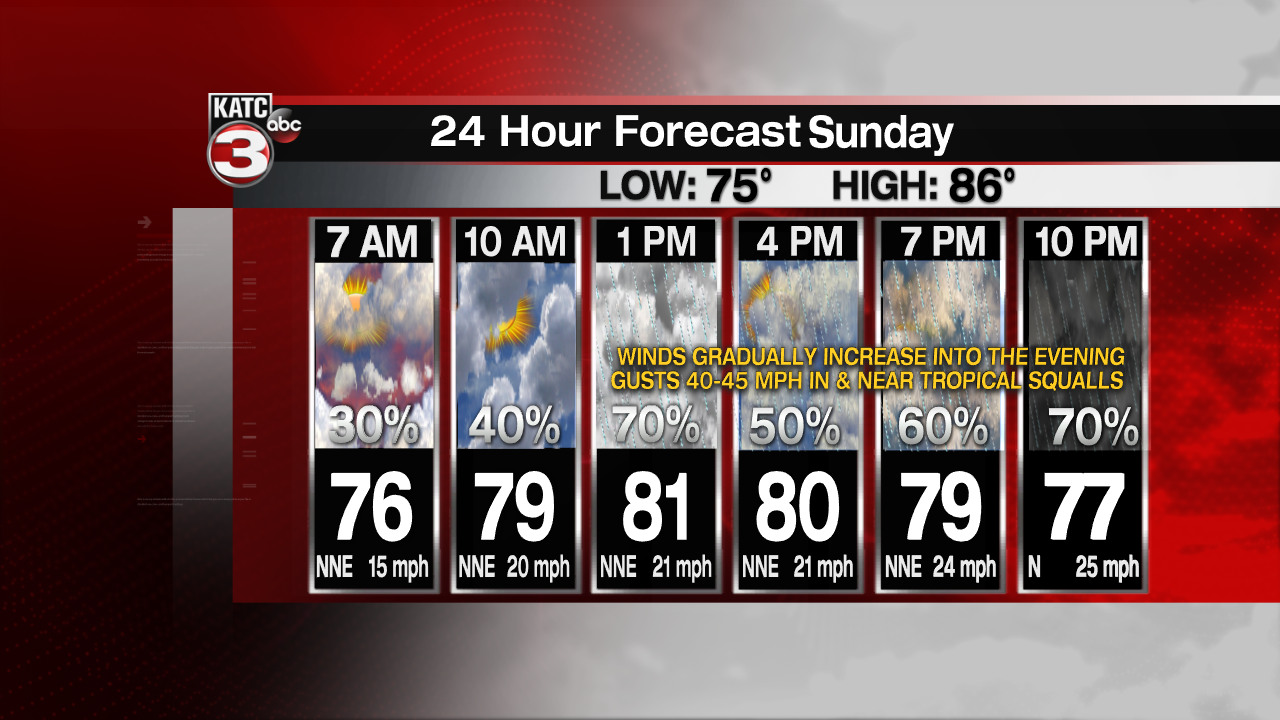 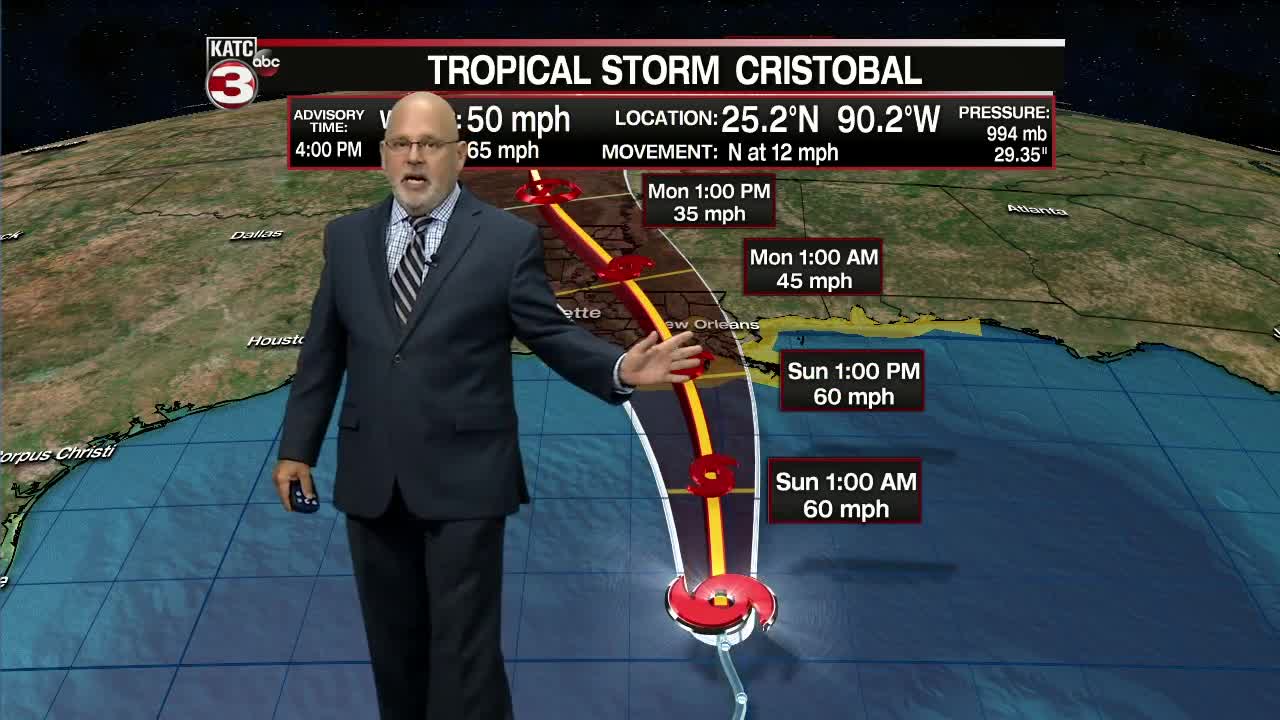 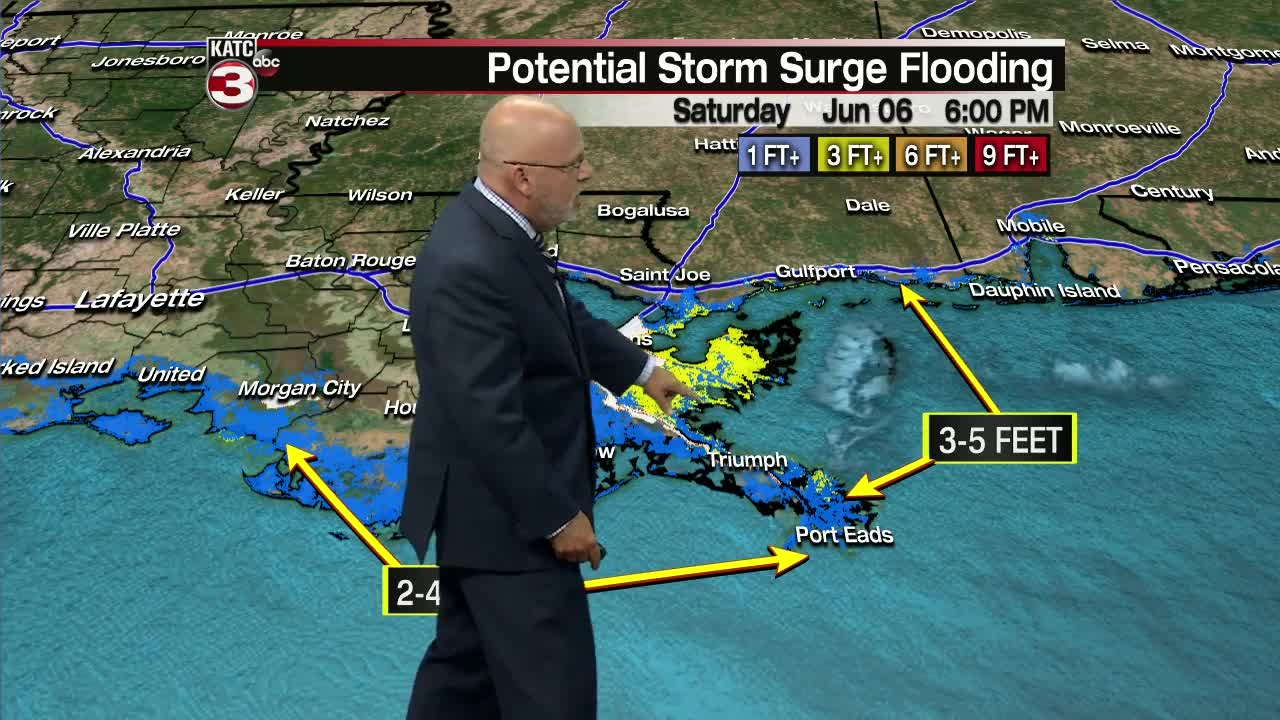 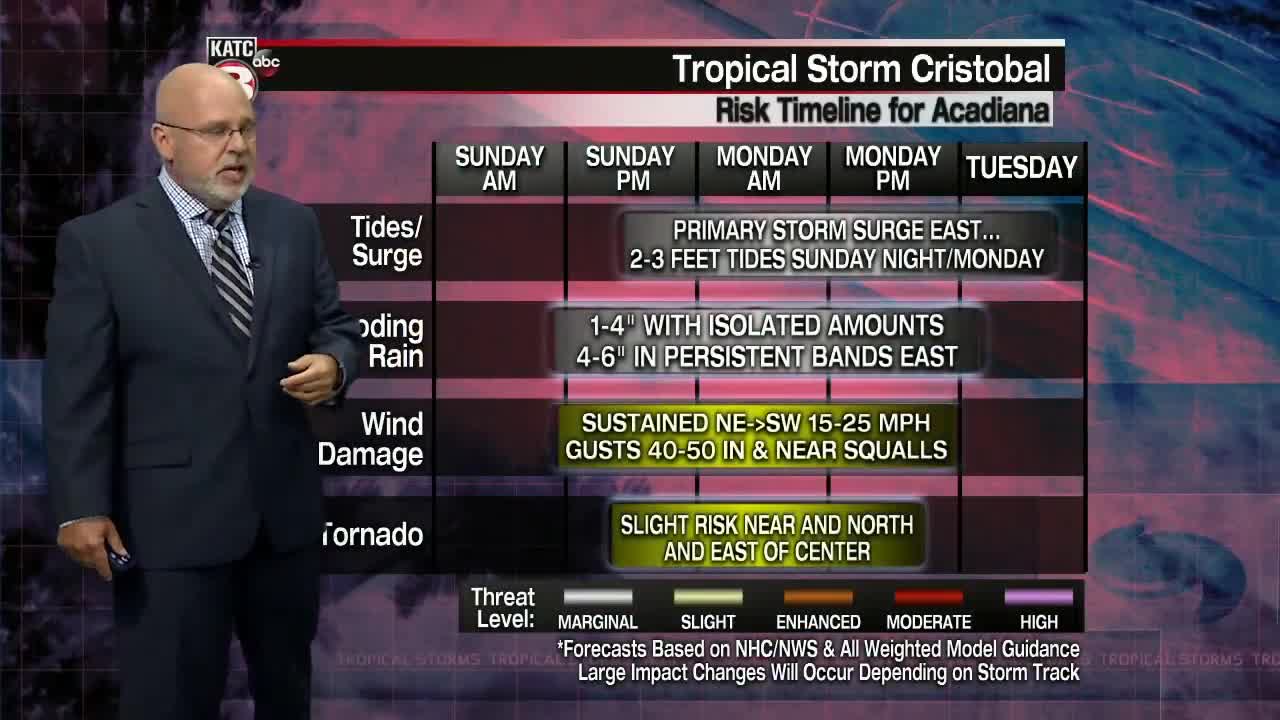 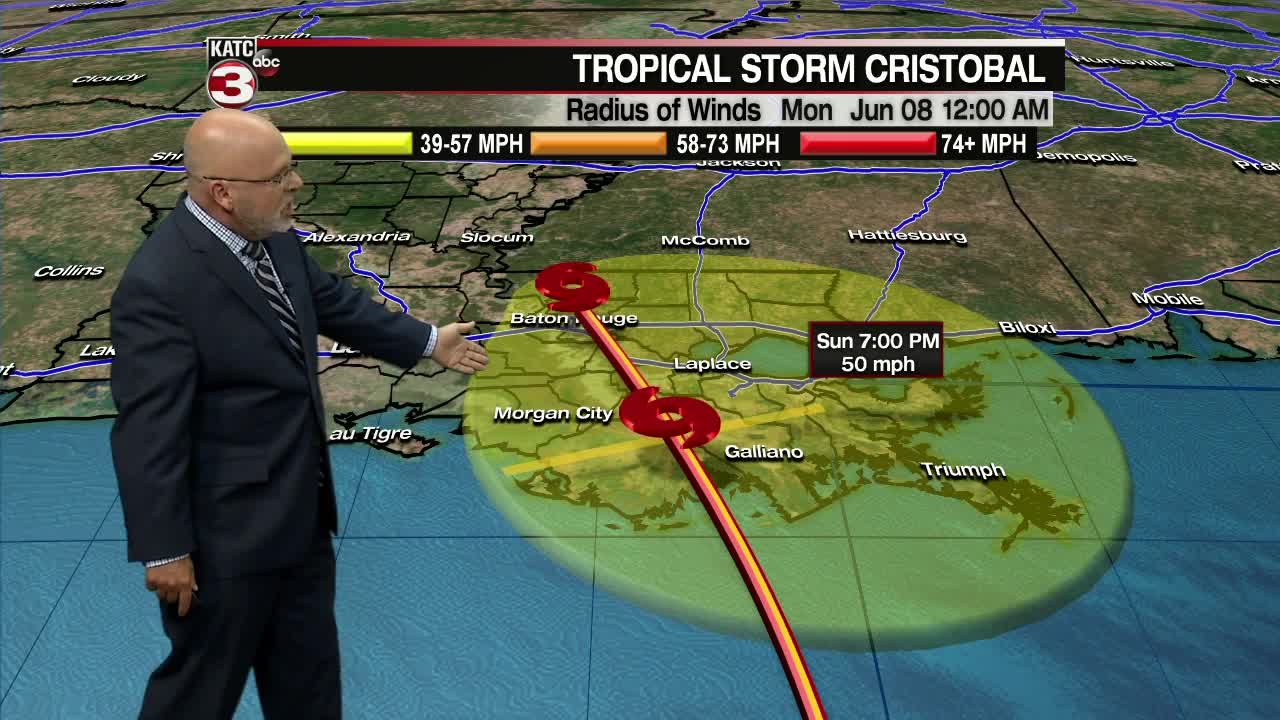 Lopsided Tropical Storm Cristobal continues its trek toward the Louisiana Coast, with main impacts across the state and Acadiana developing as the day wears on Sunday.

As of 10pm Saturday, Cristobal was still sporting 50 mph sustained winds, primarily in its eastern semi-circle, and was moving northward at 12mph.

The storm may gain some intensity, up to 60 mph winds prior to landfall Sunday afternoon/evening near Grand Isle, but fortunately drier air to the west has wrapped into the system and it will be fighting some upper level shear limiting any significant intensification.

The brunt of this tropical storm should primarily be east and eventually north of Acadiana, but nonetheless our area is in store for some dynamic winds and occasional tropical squalls developing into Sunday afternoon.

Acadiana can expect winds to steadily increase as the day wears on Sunday with 15-25 mph winds from the northeast gradually increasing to 20-30 mph or more into Sunday night and at least, into early Monday.

While highest sustained winds and wind gusts will mostly likely be found over Eastern Louisiana (and points east) wind gusts locally in Acadiana could increase to the 40-45 mph range Sunday afternoon/evening, Sunday night into early Monday.

Most of the higher wind gusts will be most likely in and near tropical squalls that will scattered through the area.

The more concentrated rain bands and the risk of flooding should be confined to Eastern Louisiana and into Mississippi and Alabama (perhaps parts of Florida too).

Rain totals in general for Acadiana shouldn't be too bad, generally 2-4" from Sunday through Monday...but isolated spots might see more if any persistent rain bands/squalls set-up. Widespread flooding from rain is not anticipated for Acadiana at this time.

The highest risk of flooding with the possibility of 8-12" or more, will be most likely from Eastern Louisiana eastward into Mississippi and Alabama.

Storm surge with Cristobal will be highest across Eastern Louisiana all the way over to the West Coast of Florida.

Initially gusty north-northeast winds Sunday will drive the water along the Acadiana Coast out into the Gulf, but as the storm passes to our north, winds will turn around out of the south to southwest bring storm tides at least 2-3 feet above normal beginning late Sunday night and continuing through the entire day Monday.

The weather pattern will start to settle down Tuesday into Wednesday with the risk of scattered storms remaining in the forecast.

And eventually drier more pleasant weather (mainly lower humidity) will follow in the wake of Cristobal for the balance of the week and likely into next weekend.

Stay with KATC, katc.com, the KATC news and weather apps, and social media for the latest on Tropical Storm Cristobal.