UPDATE: Florence has become even stronger over the Atlantic Ocean.

Florence had reached Category 3 strength earlier Monday, but data from hurricane hunter aircraft indicate the storm is quickly getting stronger as it moves over warm Atlantic waters.

Forecasters say the hurricane’s strength is expected to fluctuate but it still will be a dangerous storm by the time it reaches the coast of South Carolina or North Carolina on Thursday.

As of noon EDT, Florence was centered about 575 miles (925 kilometers) south-southeast of Bermuda, moving west at 13 mph (20 kph). 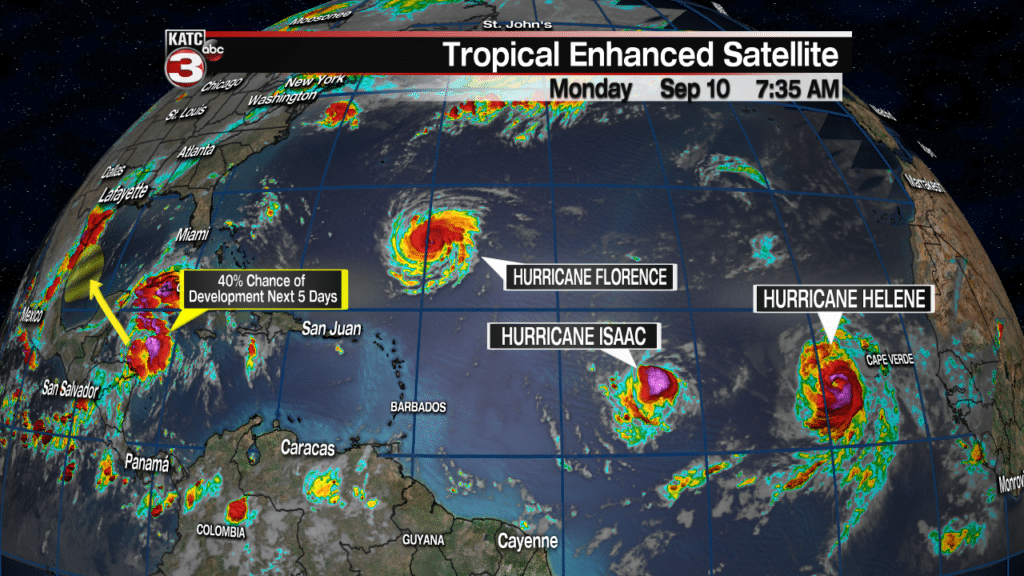 Satellite image of three current hurricanes, and an area of interest.

The second week of September is traditionally the peak of hurricane season, and this season has been no exception with three Atlantic hurricanes and an area of interest. While few of these will make any impact on Acadiana let’s run through the tropics so you can arm yourself against hype and misinformation.

The one that should be watched closest by residents in Acadiana, or the western Gulf Coast, is a tropical wave that currently sits off the coast of Honduras. This wave will drift northwest over the next several days and eventually into an area that would be favorable for some tropical development. Pressures have been running a little lower then average in the western Gulf which would indicate a favorable environment for tropical systems and there’s a little model support for development.

The EURO model, which handled T.S. Gordon well, is indicating that perhaps there is a tropical depression over the weekend. This is more of an issue for coastal Texas, but since we’re so close it’ll be worth watching. It’s safe to say we all know how much rain the Gulf of Mexico can produce and this has the makings of a very wet scenario for someone regardless of tropical development. The GFS for this time period is a lot less bullish on any development so there’s still quite a bit of uncertainty in the forecast. It’s not something to panic over but it will be something to watch over the next several days.

The smallest of the three storms in the Atlantic is currently Hurricane Isaac, a storm that has yet to develop and eye and is the least impressive on radar. While it’s not anticipated to make a run into the Gulf of Mexico it will impact the Lesser Antilles later this week. After the Caribbean it’s expected to fizzle out before it reaches the Gulf.

This is a smaller storm and smaller storms have proven to be particularly fickle with big swings in intensity and forecast. This again should be filed away in the back of your minds as something to keep an eye on but nothing that is of immediate concern.

Hurricane Florence is an absolute monster of a storm, and continues to gain strength as it progresses westward, it is now a Category 3 storm. The National Hurricane Center is anticipating this storm reaching Category 4 and making landfall along the Carolina’s as a major Category 3 hurricane. Landfall is expected later this week while conditions along the Atlantic seaboard will deteriorate as the week moves along. If you have interests in the coastal Carolinas or even along the Georgia or Virginia coast you should absolutely be paying close attention to this storm. I won’t get into a technical forecast discussion on Florence but would urge you to look up any of the great meteorologists working in that area who are much more familiar with this storm.

Hurricane Helene is the least impactful of the three storms, it’s an ocean storm that won’t come anywhere near the coast. The United States won’t be impacted whatsoever by this system.