Showers and severe storms are still expected to move through Acadiana on Thursday, making it important to stay weather aware.

WHERE: All of Acadiana will remain under an Enhanced Risk for some severe weather, but with a little uncertainty in the forecast there’s been no mention of upgrading to an Moderate Risk.

It still looks likely that the worst of the weather will manifest itself along the I-55 corridor which runs between Jackson and McComb in Mississippi. 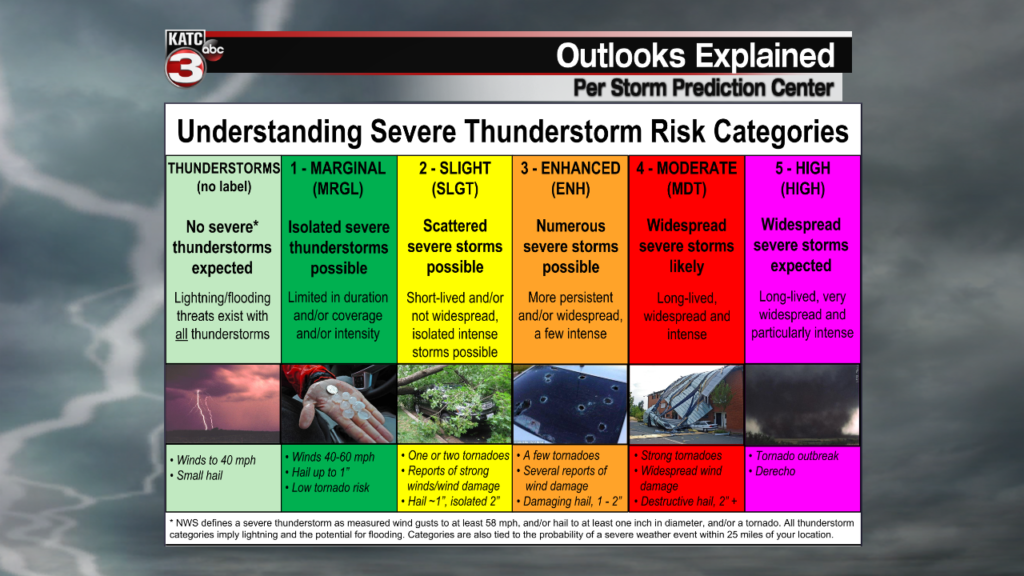 WHEN: Showers are expected to start picking up in the mid-morning and generally get more intense as the afternoon progresses.

The activity will then continue into the early evening before finally clearing the area, with storms moving from west to east.

IMPACTS: The biggest issue Thursday is going to be damaging winds along the squall line as it moves through, this would mean wind gusts at or higher than 60 mph.

Tornadoes will be the other major issue to keep an eye out for, while the threat is greater to our east that doesn’t mean we have a non zero chance.

Isolated tornadoes will be possible and we may even end up with a strong tornado or two Thursday afternoon.

Secondary threats will be hail and minor flooding, neither of which look like they will be a major issue but still something to monitor.

While flooding isn’t expected to be a widespread issue some minor flooding on low lying roadways will certainly be possible.

Make sure that you have a reliable source of weather information, and stay up to date on the latest forecast changes.