After a very stormy Sunday morning, things will be quieting down this week as a ridge of high pressure will build over the Southeastern United States. This ridge will edge westward over the course of the week, shutting down the rain chances in Acadiana into the weekend. This ridge will not only suppress the rainfall, but will also prevent much cloud cover from building, so expect a warming trend with highs consistently in the lower 90s for the second half of the week. 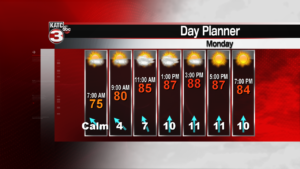 Expect some cloudiness to build later this afternoon. With the residual moisture still lingering, humidity levels will be high and heat index values will climb into the upper 90s to near 100. As the week progresses, the dew points will drop off somewhat, making it feel drier. So tonight’s low should remain in the mid 70s while feeling quite muggy. Later this week overnight temperatures should fall closer to 70 degrees. Highs will stay in the upper 80s today and Tuesday, with low 90s for the rest of the week. The sunny and dry period should linger into the weekend. 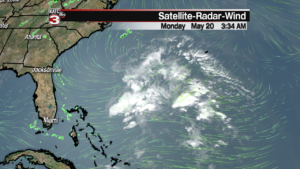 A disturbance in the Atlantic Ocean northeast of the Bahamas is looking better organized this morning. The National Hurricane Center has a 60% chance for development over the next few days. Even though Hurricane Season officially begins June 1st, a pre-season storm develops on average about every other year.