Acadiana remains under the gun for additional locally heavy rains and storms through Saturday night before the threat finally diminishes Sunday morning.

A Flash Flood Watch remains in effect for all of Acadiana through 7pm Saturday for the potential of 2-3″ of rain or more possible through Saturday evening. 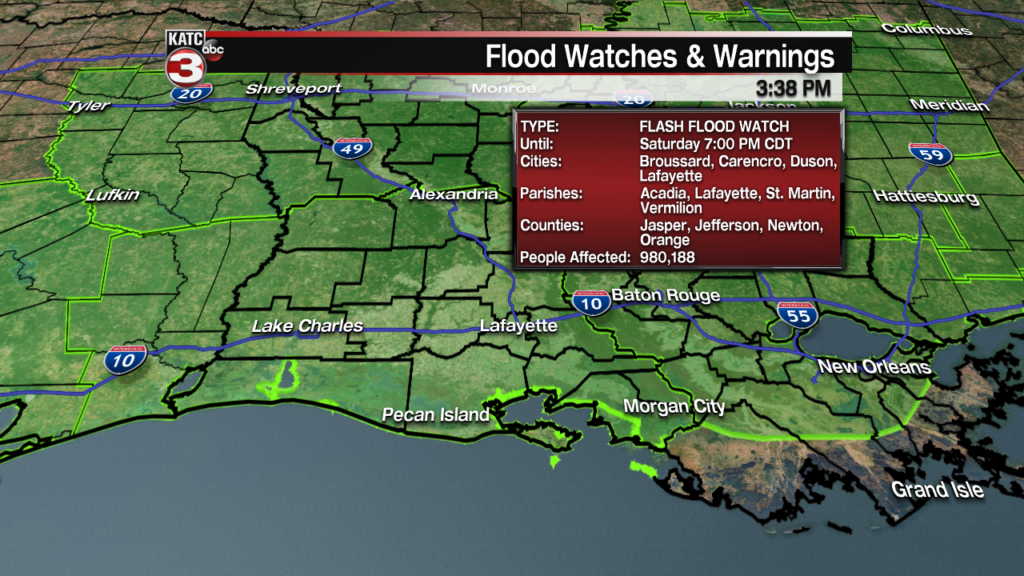 And with the grounds already saturated from 2-8″ across portions of Acadiana, it won’t take much over a short period of time, to produce localized flooding. 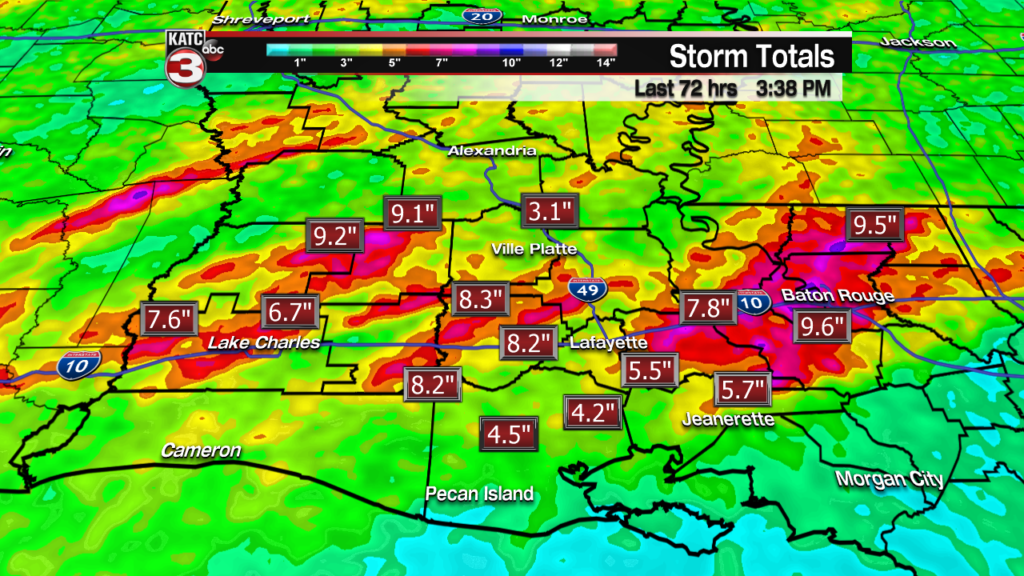 The latest Extended Predicted Radar (HRRR) model keeps the risk of scattered showers and a few heavy thunderstorms in the forecast overnight.

But as of early Friday evening, a storm complex offshore was dominating the storm scene keeping the instability and deep moisture offshore, but it was also weakening, which could allow for scattered storms to build inland across portions of Acadiana into Southeastern Louisiana through the overnight hours. 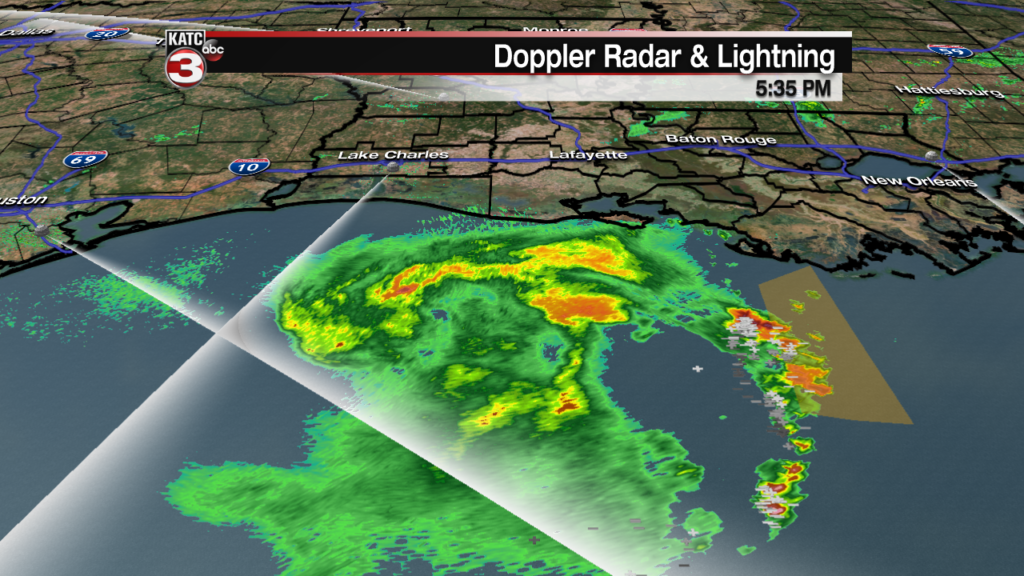 By all model accounts though, rain and heavy storms will become most likely again by midday Saturday and should continue into Saturday evening, with potentially another round of heavy storms Saturday night into the early morning hours Sunday. 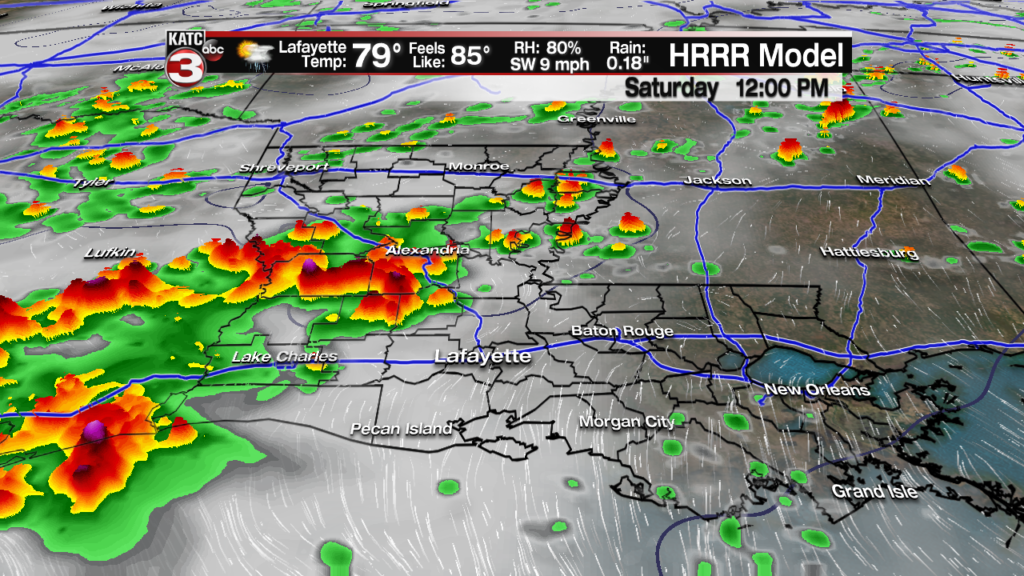 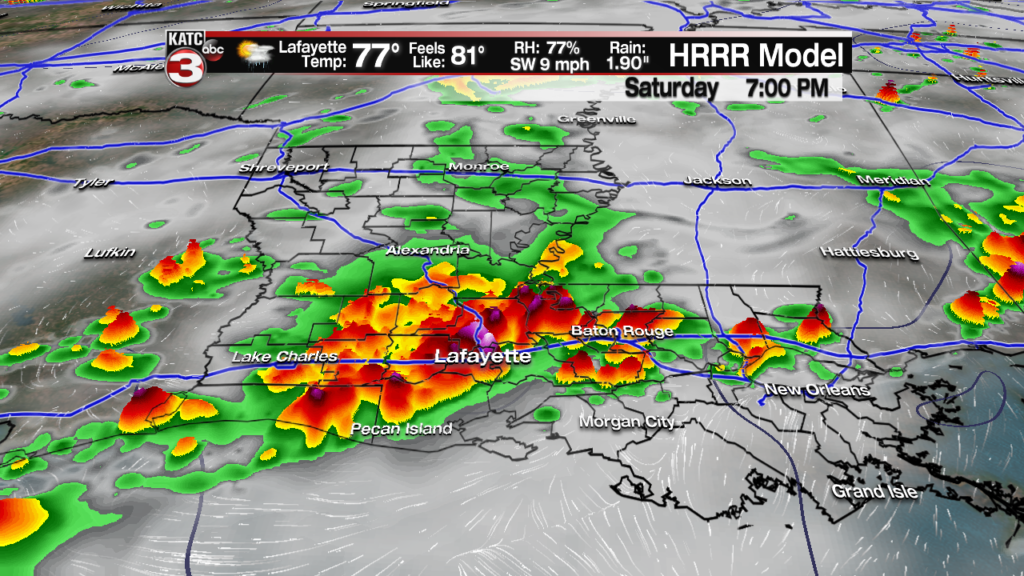 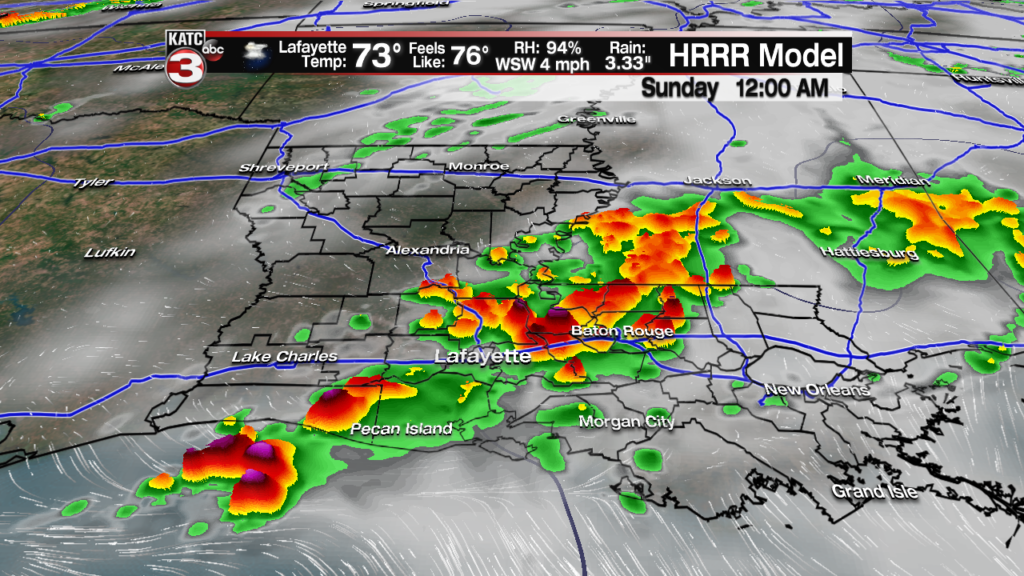 Another 1-4″ of rain will be possible in the storms Saturday into Saturday night, which will likely cause additional flooding in spots, especially when most of that comes within an hour or two. 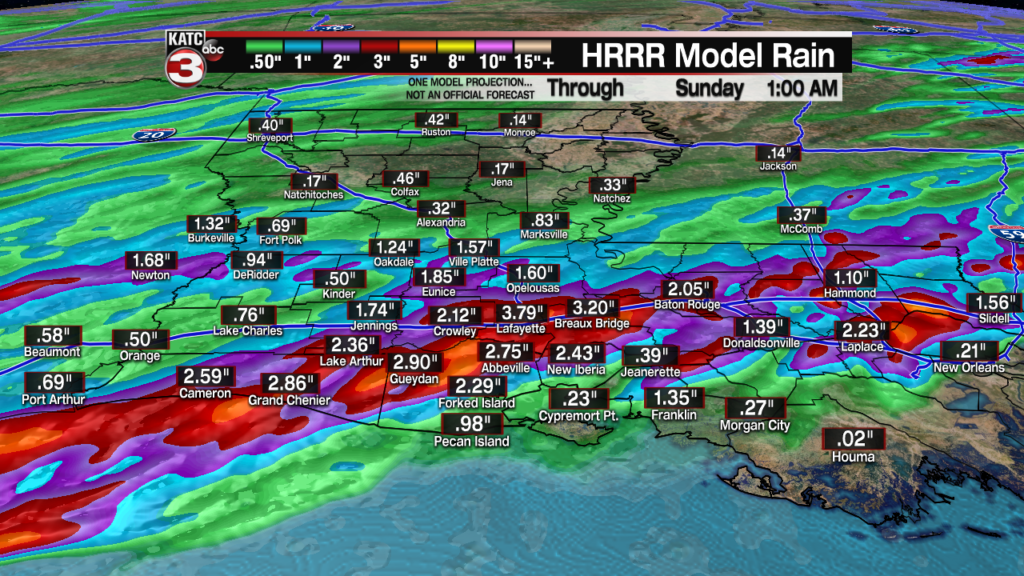 And like the last several rounds of storms, isolated amounts much higher could be possible in a few spots where 5-8″ or more may fall within a 12 hour period which will lead to flooding of homes.

Right now this is impossible to forecast where and when, but once again the RPM model is indicating the chance of a few hot spots that could see serious flooding…and in this run Friday (below), that appears to manifest toward Baton Rouge on eastward, but this hot spot could easily develop elsewhere, including perhaps some spots in Acadiana. 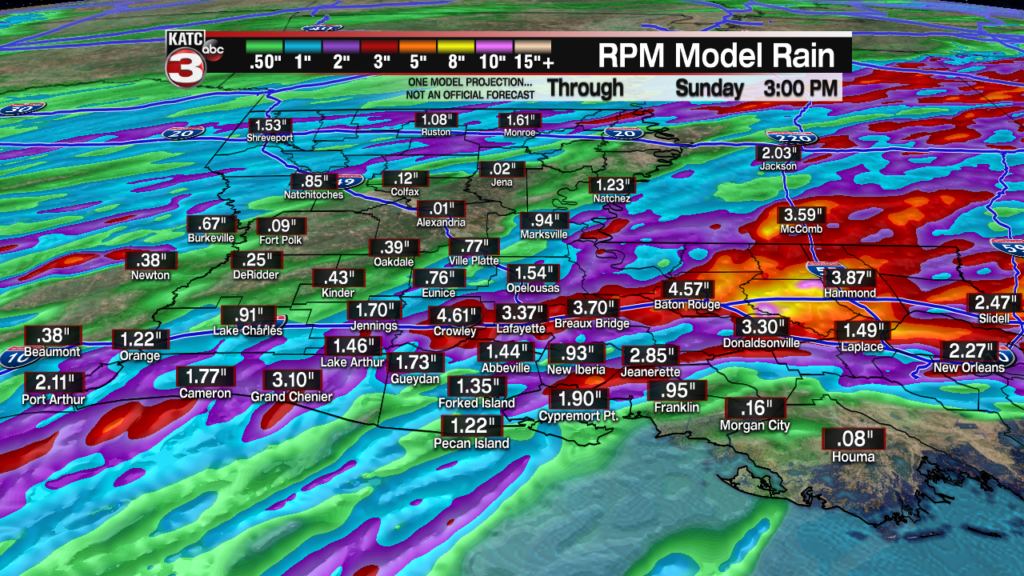 And by the way, the Storm Prediction Center (SPC) keeps Acadiana hatched in for a marginal risk of severe storms Saturday into Saturday evening, with the primary threats being damaging winds and/or some hail. 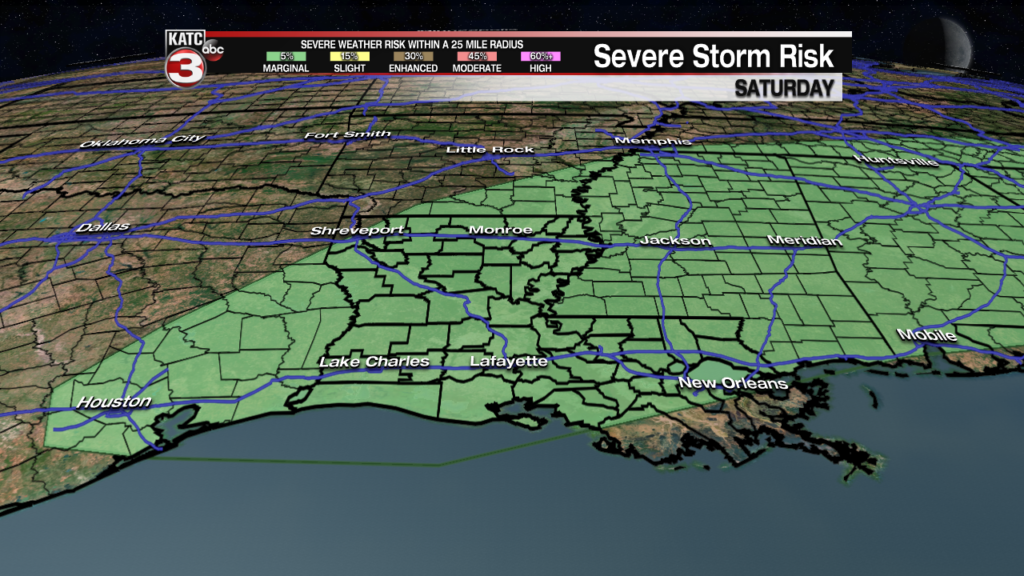 And it won’t take much wind to topple trees in the area due to our antecedent moist grounds…so stay on guard for that too.

Mercifully the heavy rain and storm threat is expected to diminish Sunday morning, with some intervals of afternoon sun expected for our Mother’s Day afternoon.

Moving into next week, after a nice and dry Monday, some showers and storms could return to the area for a couple of days midweek, followed by another couple of nice, and increasingly warm days toward the end of the week and into the following weekend.

The Euro Model does like a bit of a severe weather threat developing perhaps for next Sunday…but that’s a long way away for any clarity.

Note on our local rivers: the Vermilion, Mermentau and Atchafalaya rivers are in flood stage(along with many if not all the bayous in the area), and while the Vermilion was dropping late Friday afternoon, it could easily rise another foot or so with the additional rainfall Saturday. 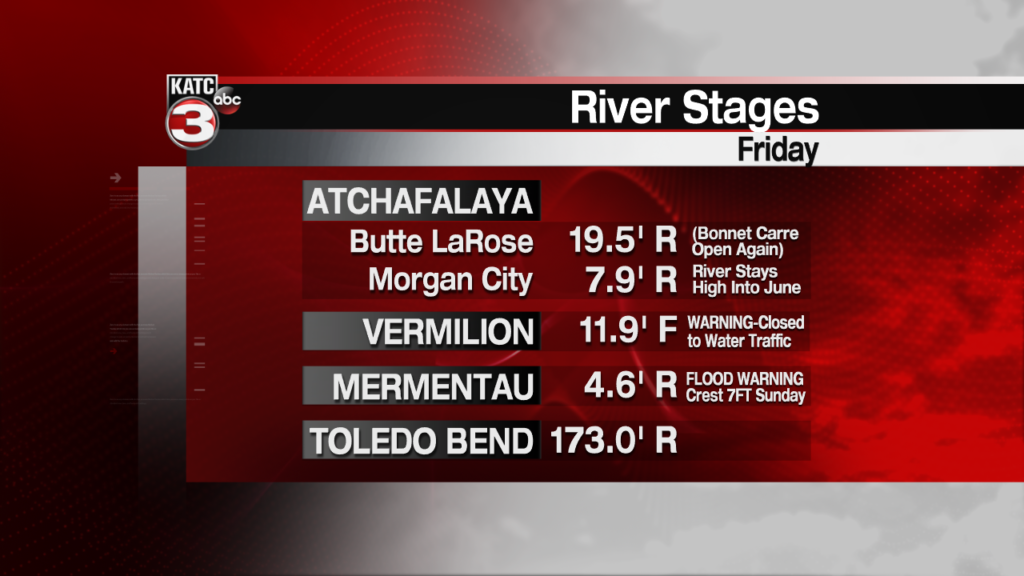 The Mermentau is expected to crest near 7 feet Sunday. Per the National Weather Service, here are the impacts of the rising Mermentau:

And because of the heavy rains upstream on the Mississippi and Red River, the Bonnet Carre Spillway was opened today for the second time this year…a first for the spillway. KATC story here.

Meanwhile, stay with KATC, katc.com and KATC social media for the latest on our continued flood threat.