Acadiana remains on track for a stormy Saturday with the risk of a few severe storms and locally a couple of inches of rain.

A vigorous upper level disturbance will ignite more showers and storms across Texas overnight through Saturday morning with activity migrating across Acadiana during the morning through midday hours. 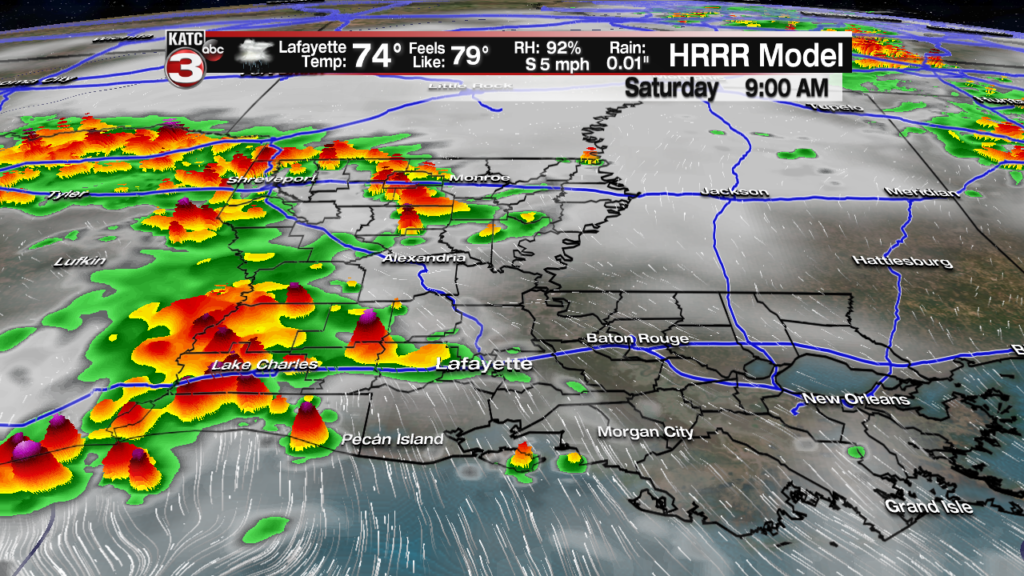 Per the Storm Prediction Center (SPC), much of Acadiana is hatched in for a slight risk (level 2 out of 5) of severe storms with the primary threat likely to be damaging winds in excess of 60 mph and perhaps some hail. 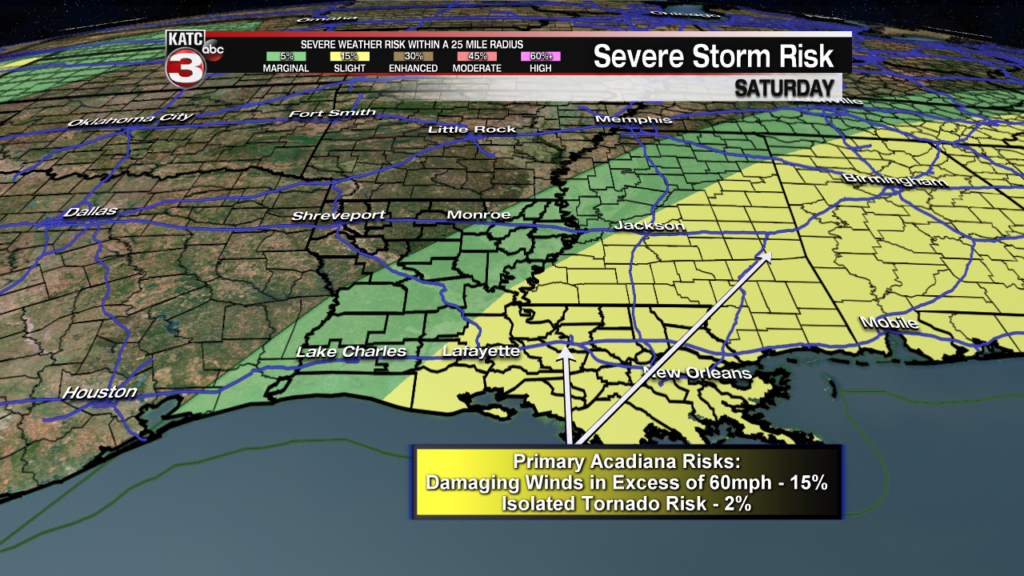 The risk of damaging winds will be near 15% while the chance of a tornado appears relatively low at 2%. 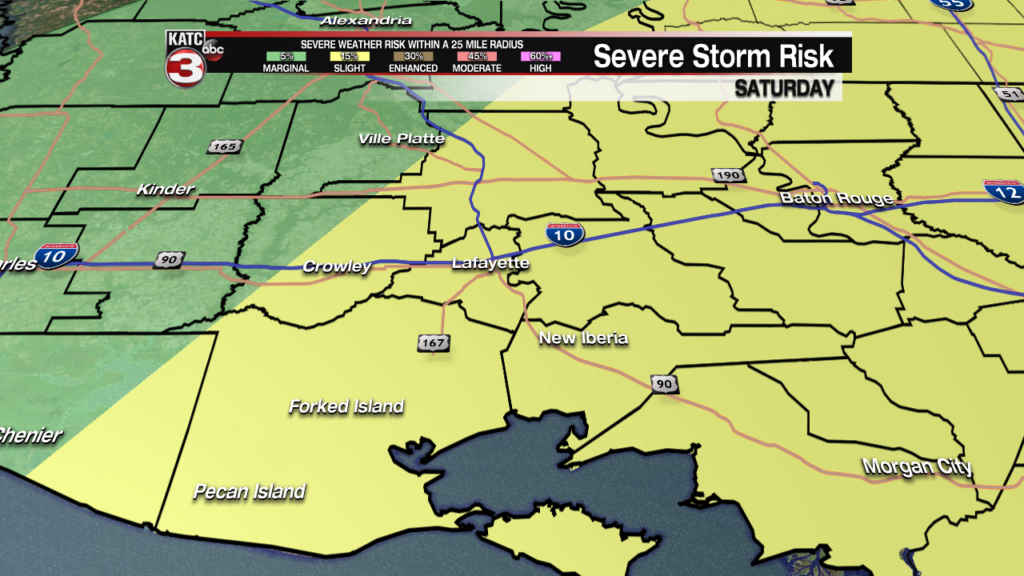 Nonetheless, expect the possibility of some sort of severe weather “watch” for portions of Acadiana early Saturday, with the most likely being a “severe thunderstorm watch”. 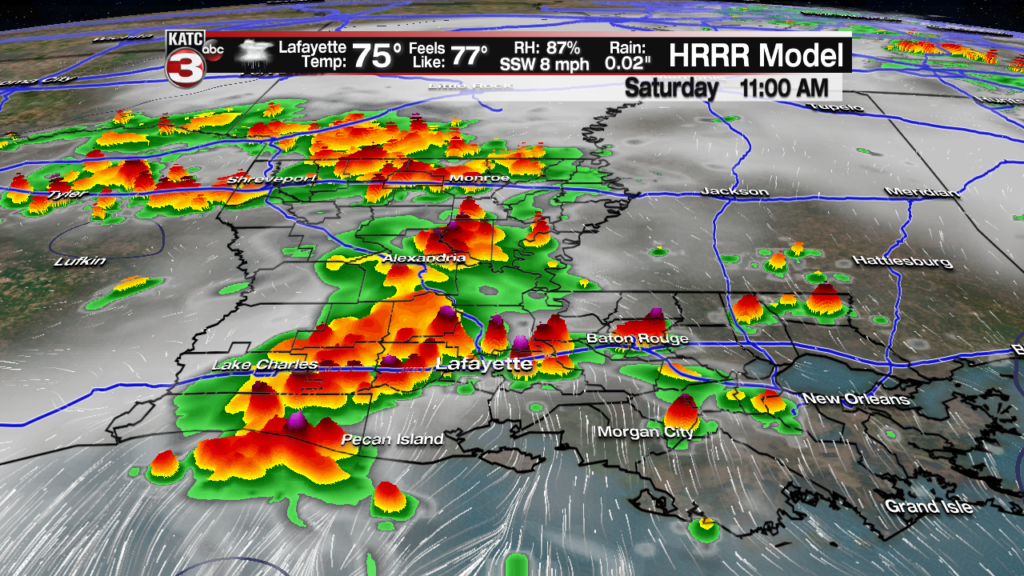 Prime times for storms looks to be in the 7 am to 2 pm time-frame for most of Acadiana, with the bulk of the activity moving off to the east by mid-afternoon. 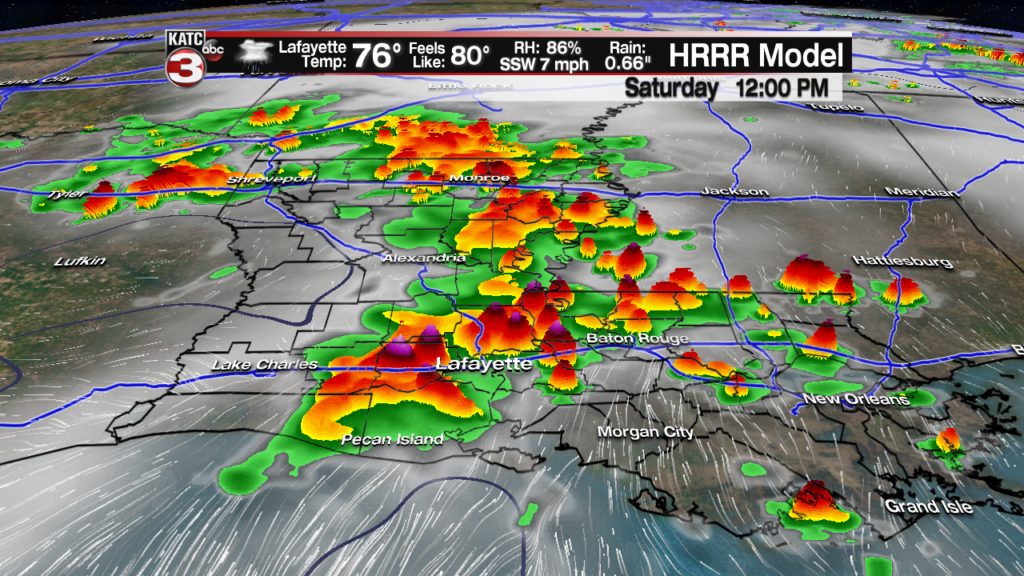 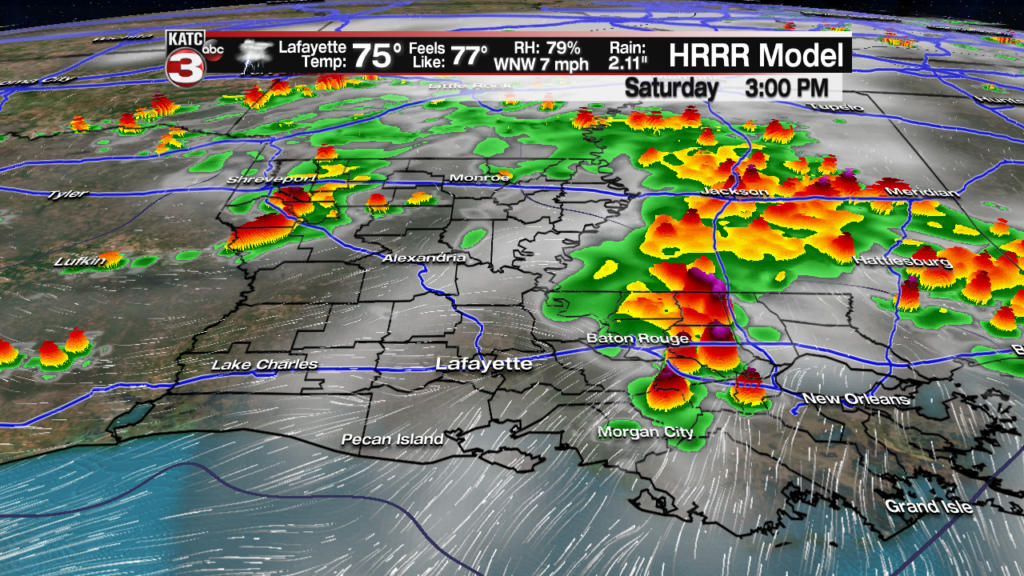 A few lingering showers and/or a storm (likely below severe thresholds but might contain some small, pea-size hail) will be possible later into the afternoon and/or early evening, but skies should at least partially clear later into Saturday night.

Rainfall totals, like the last couple of systems will once again be rather difficult to decipher, but today’s model choice remains the Extended HRRR (High Resolution Rapid Refresh) model which is in good agreement with the Weather Prediction Center’s Outlook. 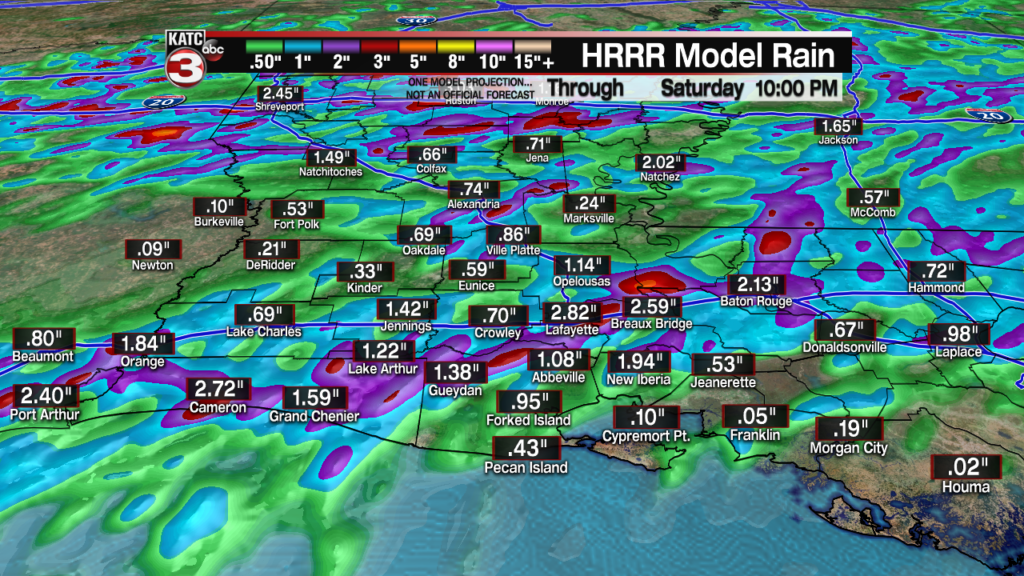 Expect locally 1-2″ of rainfall in many areas across Acadiana with isolated areas receiving less and a few spots possibly receiving up to 3″, which could lead to some minor localized street flooding.

The weather pattern into Sunday is looking quite favorable following the disturbance and a weak frontal boundary, with mostly sunny skies, lower humidity and temperatures topping out in the mid-upper 80s. 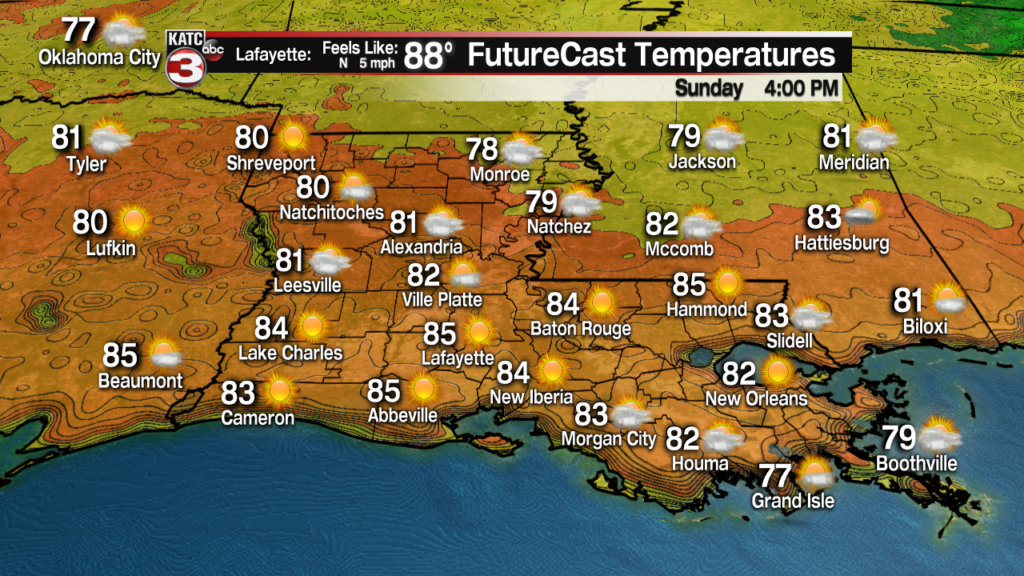 Monday looks fairly nice too with partly cloudy skies accompanied by rather warm temperatures pushing the upper 80s to near 90.

Thereafter, it appears that Acadiana will become under the influence of a southwest-oriented, sub-tropical jet stream with embedded disturbances for several days.

This should yield decent daily chances of scattered showers and thunderstorms Tuesday through the weekend and could ultimately lead to some big rain accumulations somewhere in the state.

Although the 10 day European Precipitation Accumulation Potential product should be taken with a grain of salt, it could also serve as a “heads-up” for the threat of heavy rainfall manifesting somewhere in the Bayou State down the road.

Consult the KATC 10 Day Forecast for the latest on the expected rain chances for Acadiana.

And in addition to following KATC, katc.com and social media, download the latest version of the “KATC WX” app for staying up to the second information while away from home.

In addition to receiving immediate notifications of weather watches and warnings for your, or any location, features new to the app include lightning and storm proximity alerts, so when the storms are close, you will be alerted immediately. 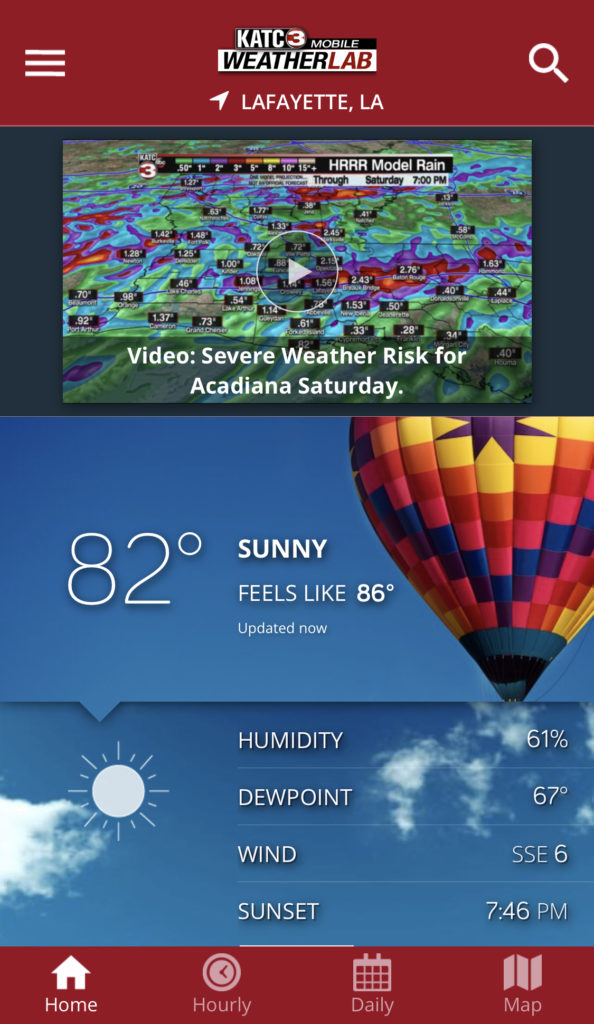 In addition, KATC is now able to deliver video and story updates on the fly straight from the Weather Lab to your device..

All notifications are fully customizable, and the latest version of the app (if not already updated on your phone and/or tablet) is now available for Android and iOS. 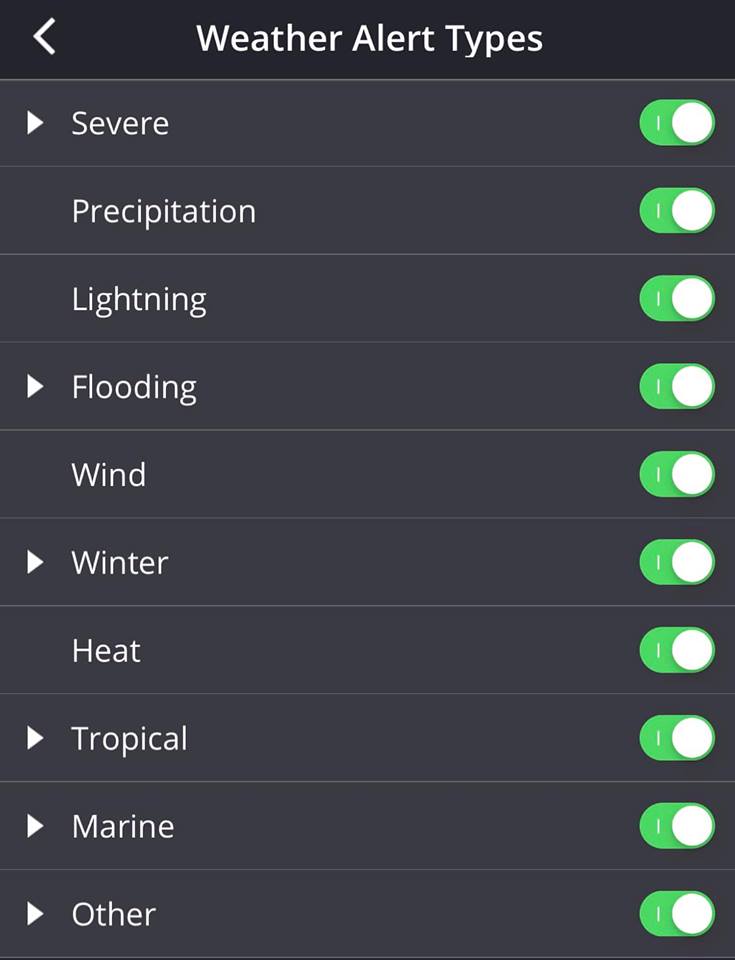