Acadiana can expect another mostly sunny and seasonably warm day for our Tuesday with gradual increase in high clouds, but overall pleasant temperatures & a nice breeze are expected through Wednesday before our next weather/storm-maker arrives Thursday.

In the near term, expect another overnight and morning period that will be easy on the a/c unit with lows dropping into the upper 40s to low to mid 50s for Tuesday morning. 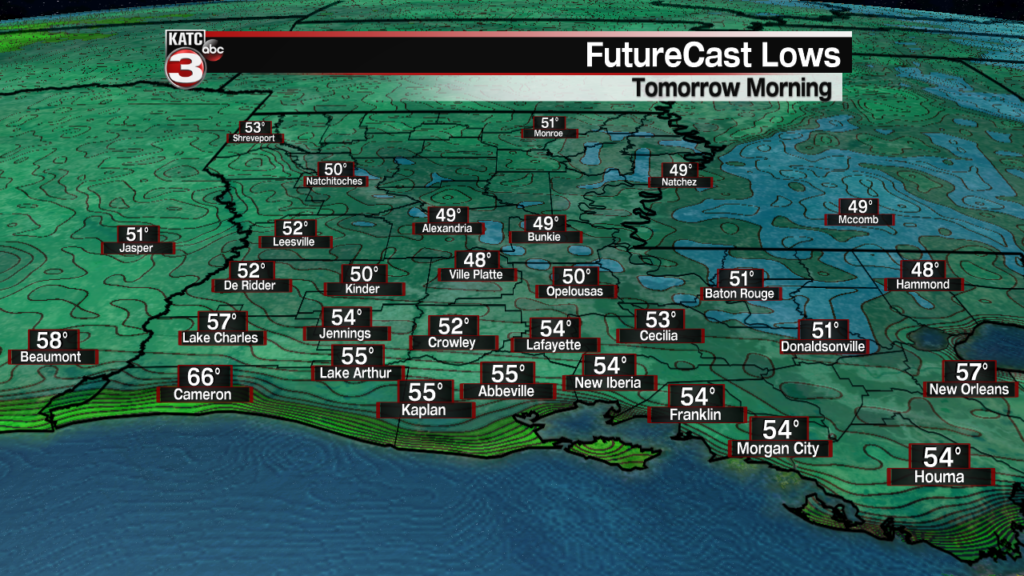 Tuesday will start out mostly sunny and likely finish with a few more high clouds later in the day. 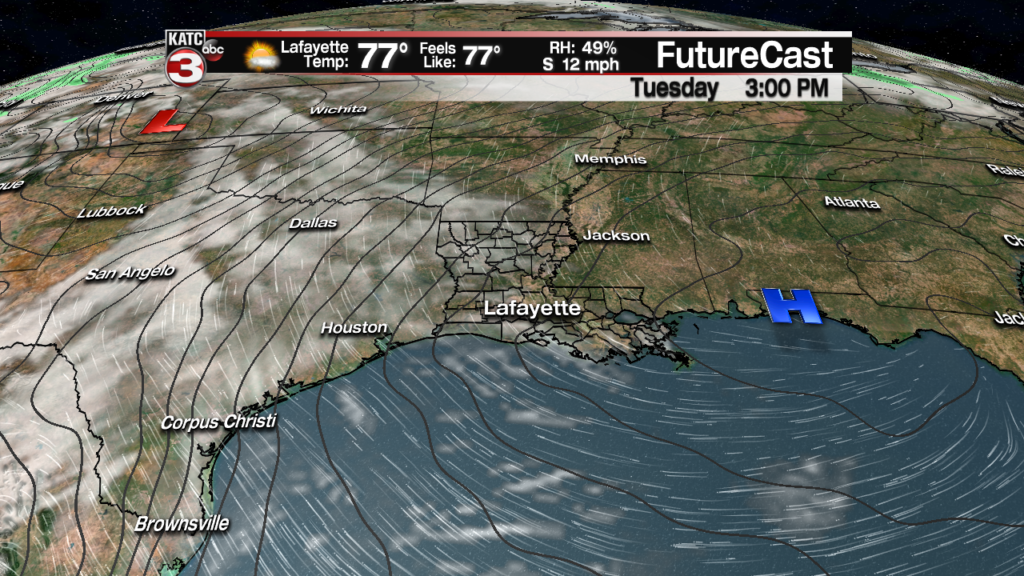 Temperatures will be a few degrees warmer in the afternoon Tuesday with highs topping out near 80. 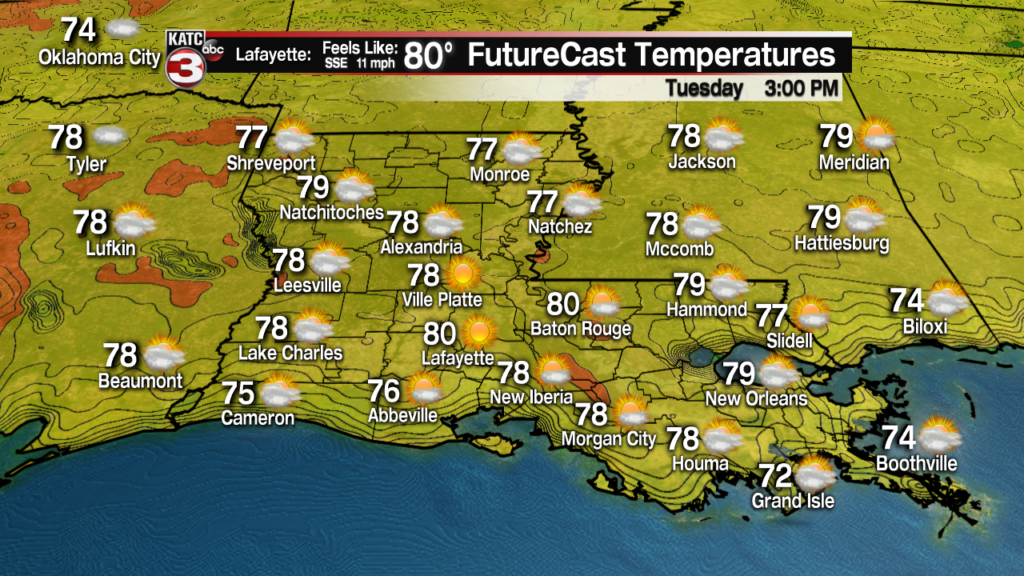 Wednesday will bring a milder start to the day (temps in the low to mid 60s), breezy south-southeast winds and increasing cloud cover ahead of our next weather-maker, that is poised of the Pacific Coast this Monday afternoon. 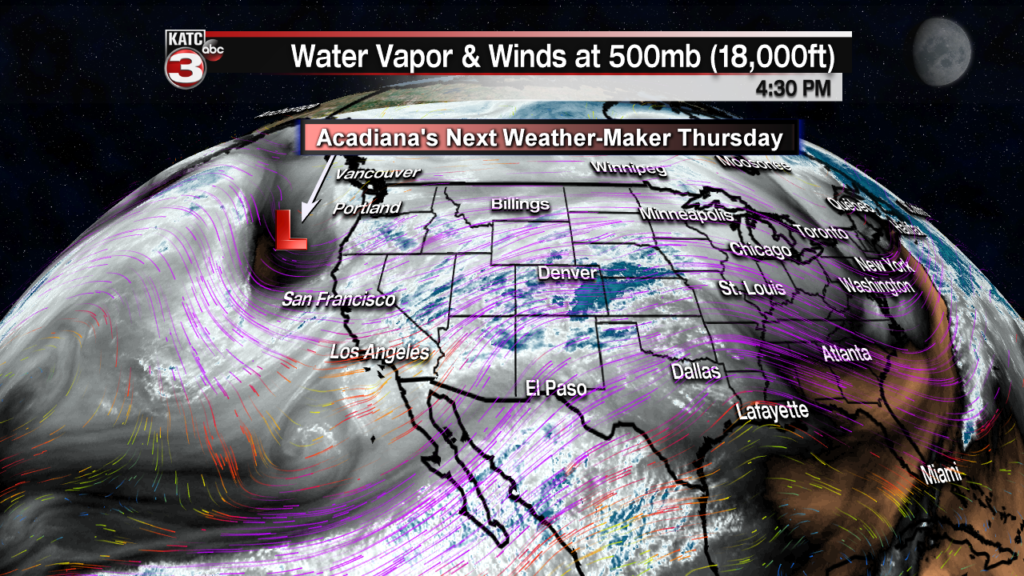 Temperatures will still likely reach the lower 80s in spite of the additional cloud cover Wednesday. 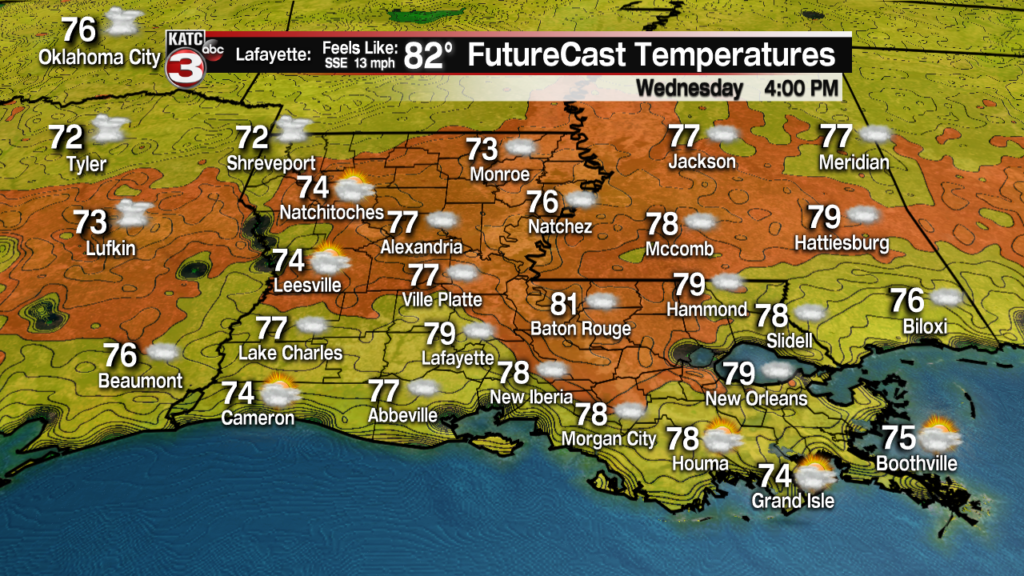 Meanwhile Wednesday, strong to severe storms may be brewing in Texas with the next approaching weather system. 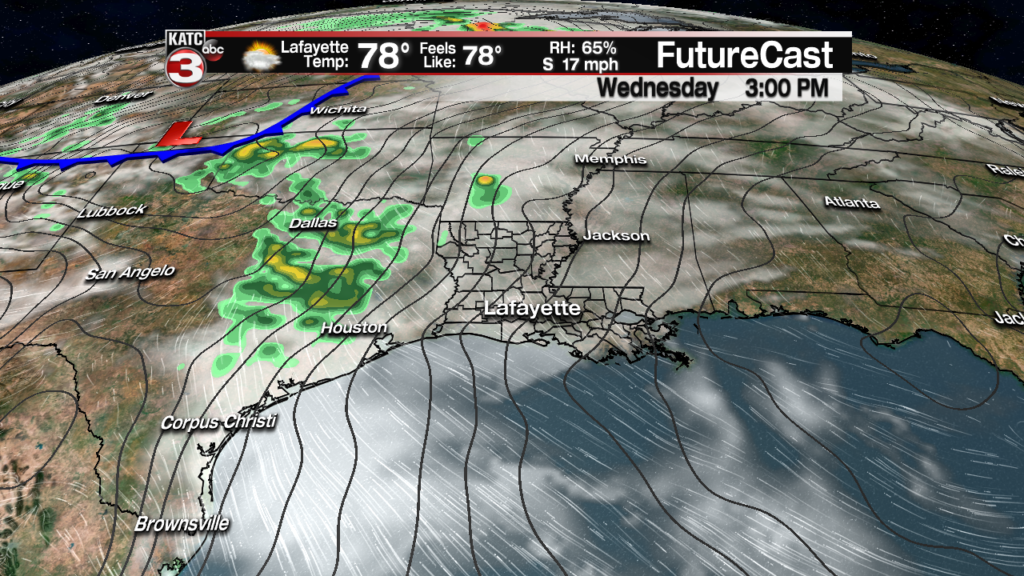 The Storm Prediction Center (SPC) has large chunk of Eastern and Northeastern Texas into Southeast Oklahoma and Western Arkansas hatched in for an “Enhanced” risk (level 3 out of 5) of severe storms there Wednesday with the primary threat likely large hail and perhaps damaging winds and an isolated tornado or two. 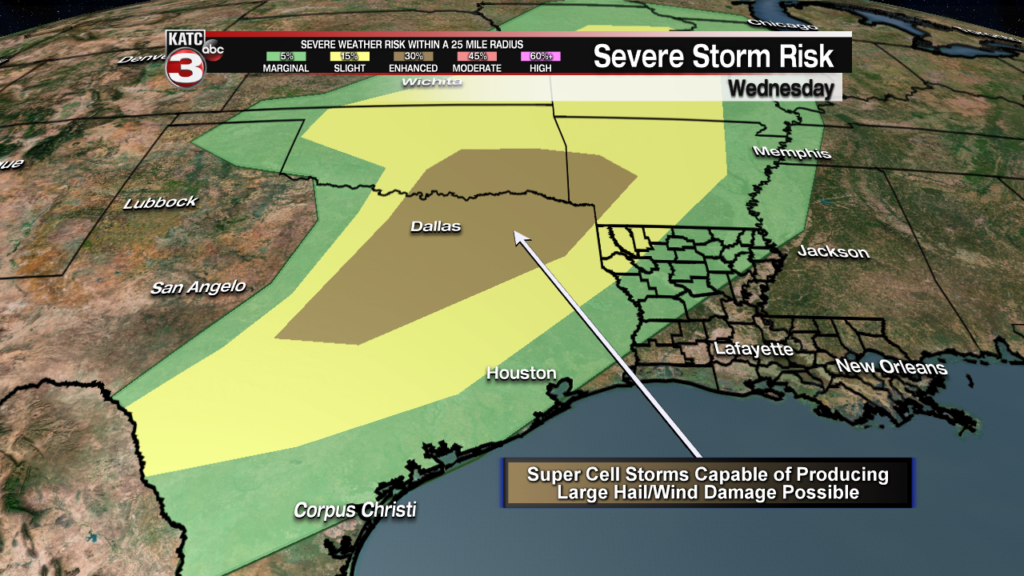 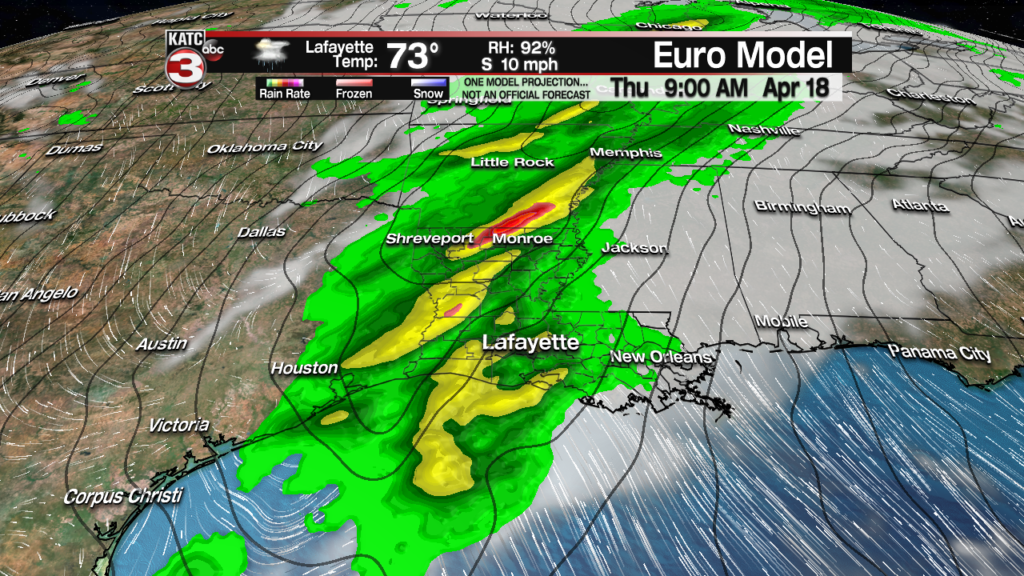 But perhaps like this past Saturday’s weather system, any severe storms (and their associated meteorological dynamics) in Texas may weaken while migrating through Acadiana and could fire-up again east of the Atchafalaya Basin into Eastern Louisiana. 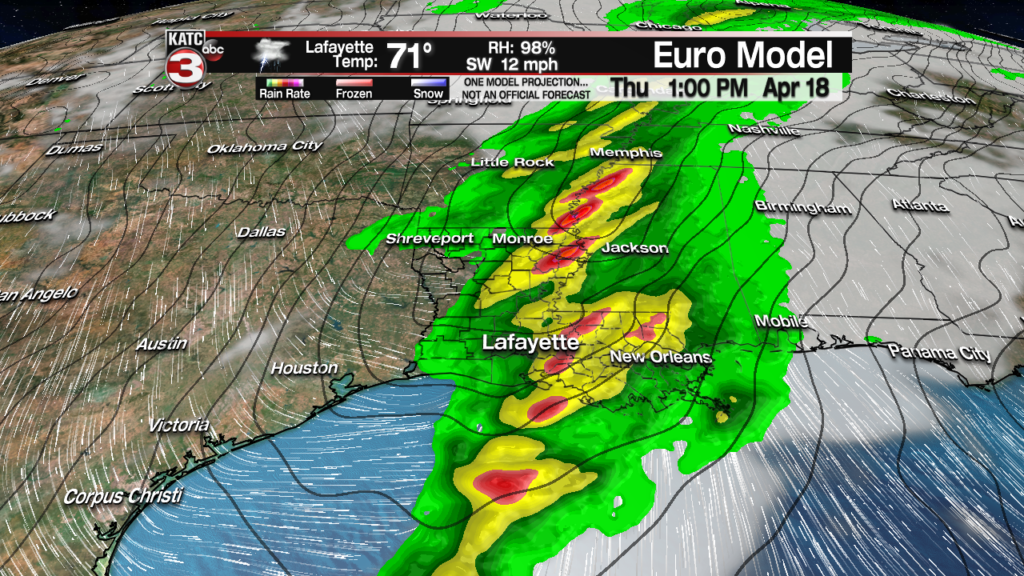 This past weekend’s system seemed to be influenced by a stable, cool Gulf marine layer along the Acadiana Coast while the storms fired up once passing the warmer Basin…this may indeed occur again Thursday.

And as a side note, some Texas dust may have reduced storm intensity across the Acadiana area this past Saturday…so we certainly got lucky considering the dynamic wind fields that were overhead this past weekend.

There were six fatalities with the storms Saturday, 5 in Texas and one in Northern Louisiana with tornadoes/damaging winds. Numerous reports of severe weather followed into the East and Northeastern U.S. Sunday with the same system.

The bottom line was that there was severe weather to the west and east-northeast of us and fatalities were reported form tornadoes in Texas to northern Louisiana last weekend, so vigilance is always a must with frontal systems this time of year.

The SPC day four forecast for Thursday outlook does have much of the Acadiana hatched in for a slight risk of severe storms…hopefully we’ll get better model and forecast details tomorrow and the possibility of making a severe weather call (and more accurate map) locally.

If we were to see severe storms, hail and damaging winds would also be the primary threats, but you can never rule out an isolated tornado.

Rainfall should not be an issue Thursday with the threat of heaviest rains likely north of our area…an inch or so, plus or minus 1/2″ is expected at this point. 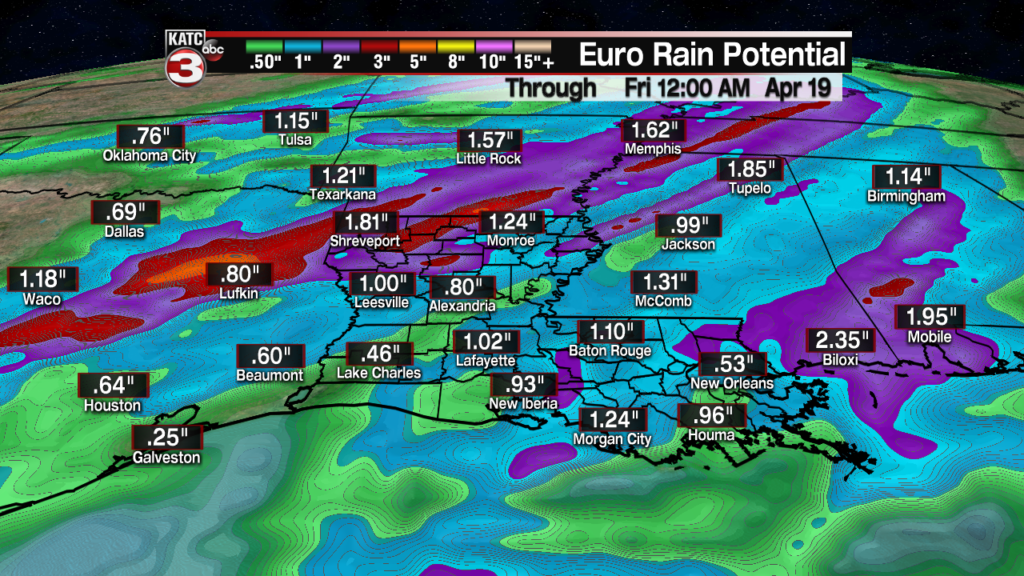 Good news is in the forecast for the rest of the week with a sunny, breezy and seasonably cool Good Friday expected along with a mostly sunny and warmer Easter Weekend.

Consult the latest KATC 10 Day Forecast for the latest.