A quasi-stationary frontal boundary dropped southward across Acadiana Monday reigning in temperatures from the lower 80s back down into the 70s Monday afternoon…and overnight we’ll see readings dropping into the upper 50s to lower 60s by morning. 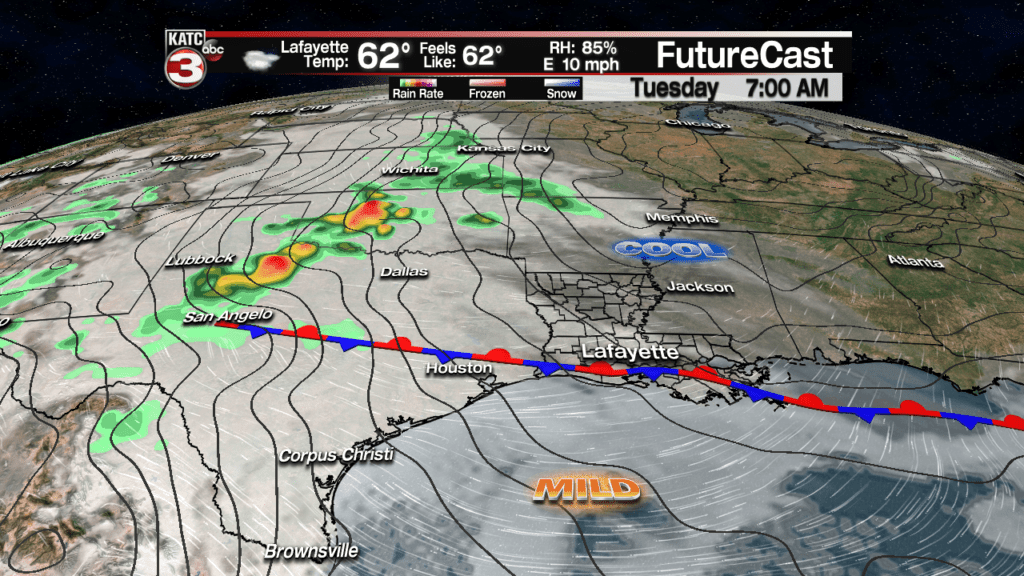 But alas, the front will travel back northward as a warm front Tuesday allowing for temperatures to rise back into the mid-upper 70s for the afternoon. 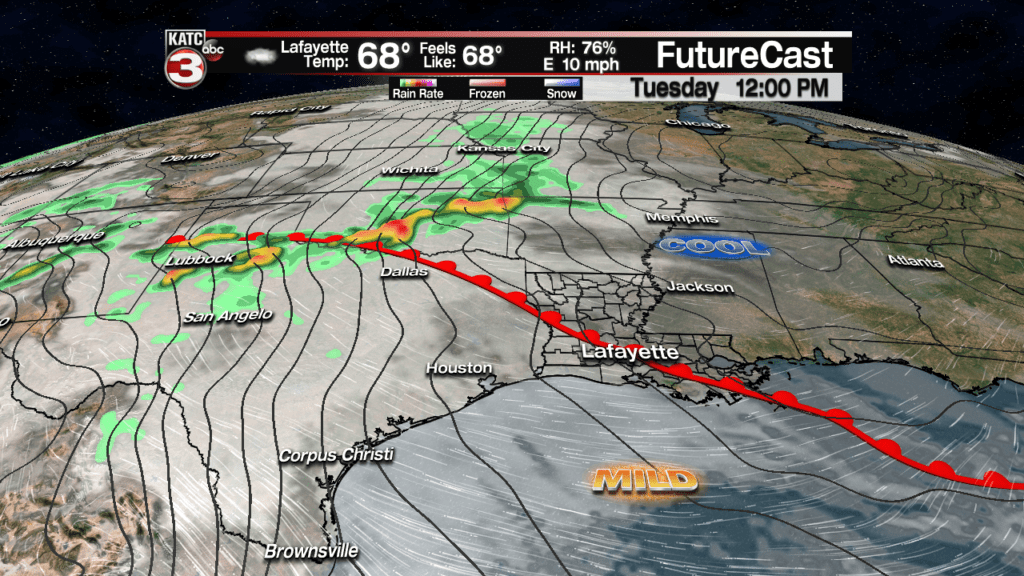 Plenty of clouds will stick around for our Tuesday with a slight chance of a misty, drizzle first thing in the morning.

A few intervals of afternoon sun Tuesday could push readings once again to near 80 for a few locations, especially across the coastal parishes. 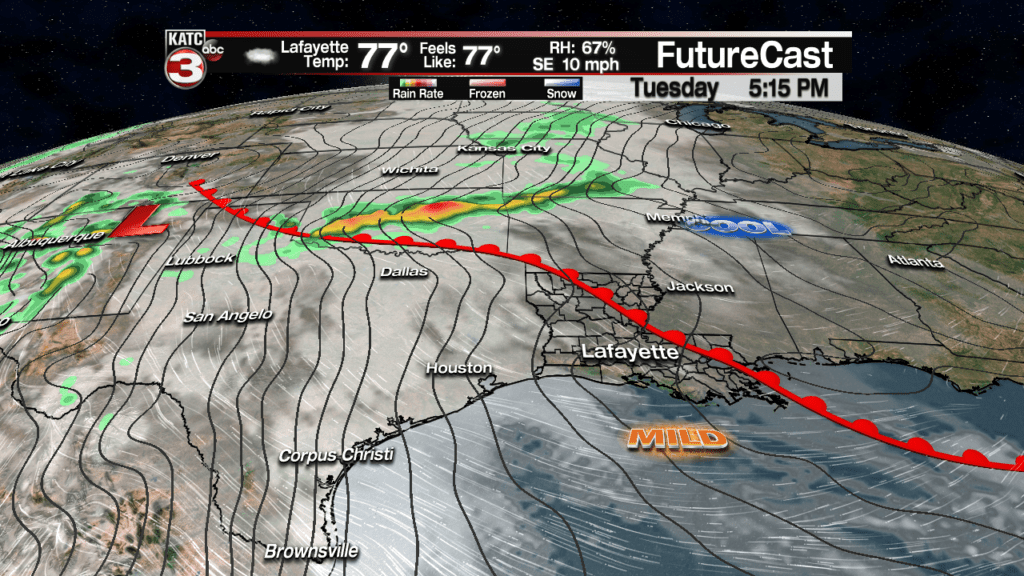 Behind the warm front, breezy southeasterly winds will kick in Tuesday afternoon/evening as a storm system exiting the SW U.S. become the nation’s next weather-maker through mid-week.

As the aforementioned storm system moves into the High Plains by Tuesday night into early Wednesday, the threat of severe weather will increase from Texas, Oklahoma, Arkansas and then perhaps into Western Tennessee/Northern Mississippi, by Thursday. 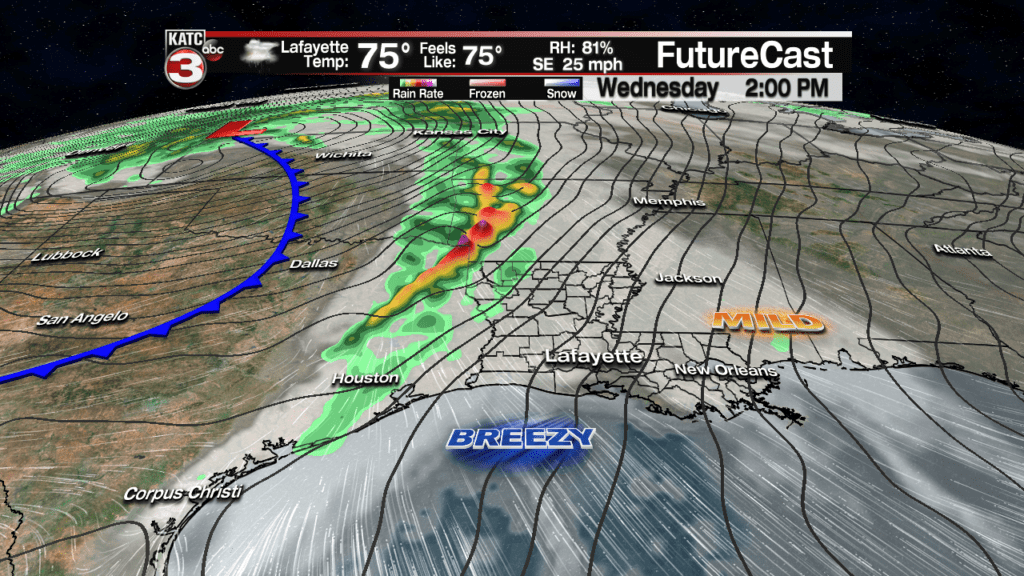 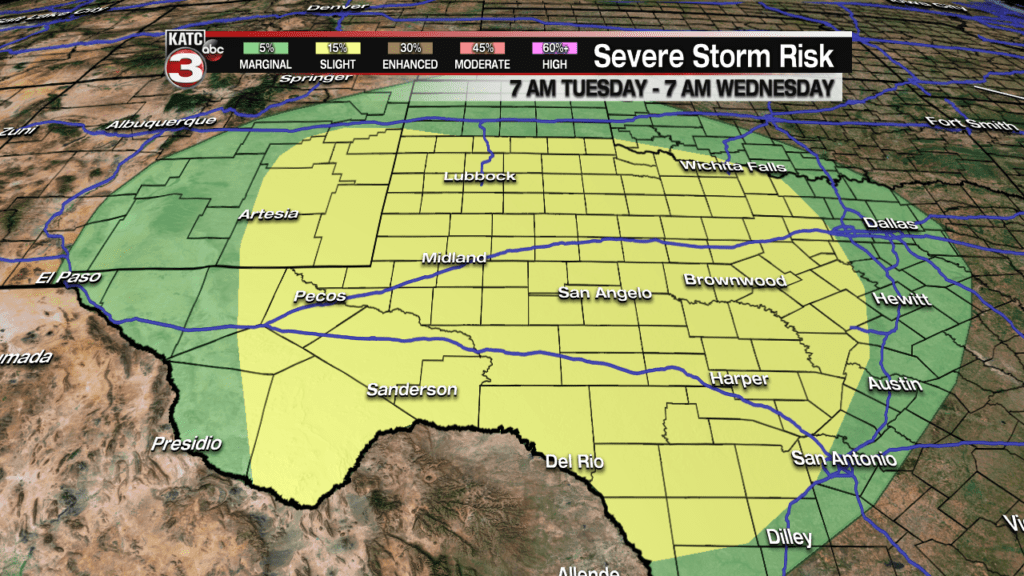 Like many of the storm systems this year, it appears that while rain chances will be increasing locally late Wednesday into Thursday, the threat of severe weather should bypass much of Acadiana to the west and north of the region.

Nonetheless, for now, the Storm Prediction Center (SPC) has Acadiana hatched in for a “marginal” risk of severe storms for Wednesday into Thursday morning. 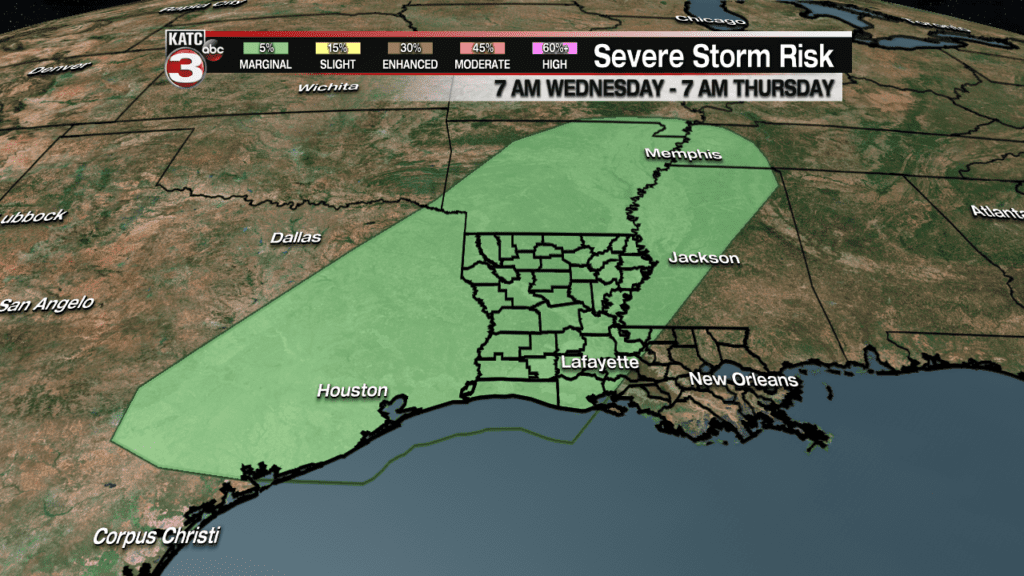 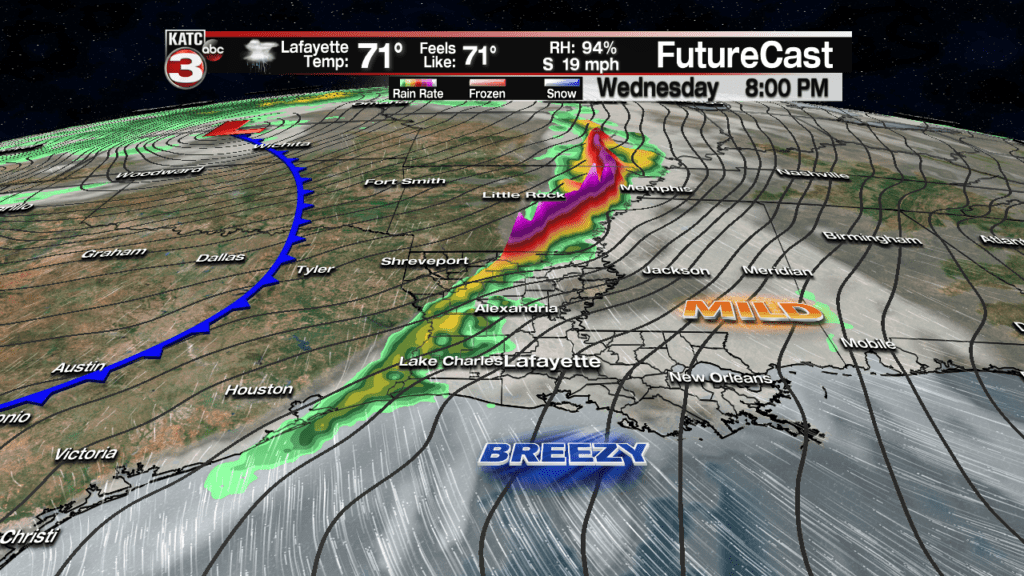 But if anything, I would think that the SPC will raise the severe storm risk for the northern part of the state in the Wednesday outlook while at the same time trim back the marginal threat of severe storms in our part of the world.

For now, we have a 40% chance of storms developing toward Acadiana late Wednesday into Wednesday night (where it could go to 50-60%), with overall, a better chance at least of some scattered showers associated with a trailing cool front Thursday. 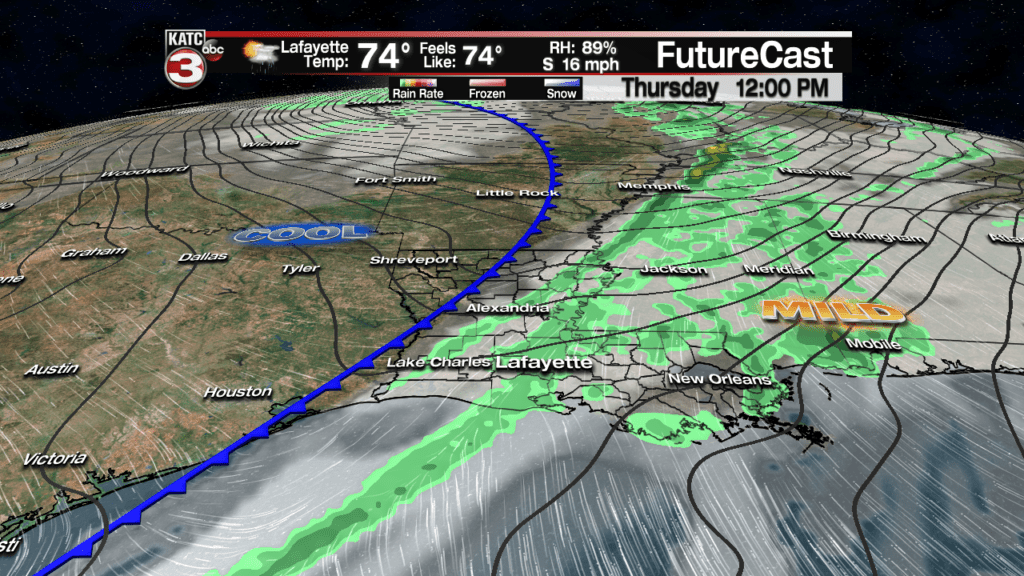 A significant and extended cool-down is then anticipated for the area Friday into the weekend with lingering overrunning clouds and temperatures likely running 10-15 degrees below normal through early next week. 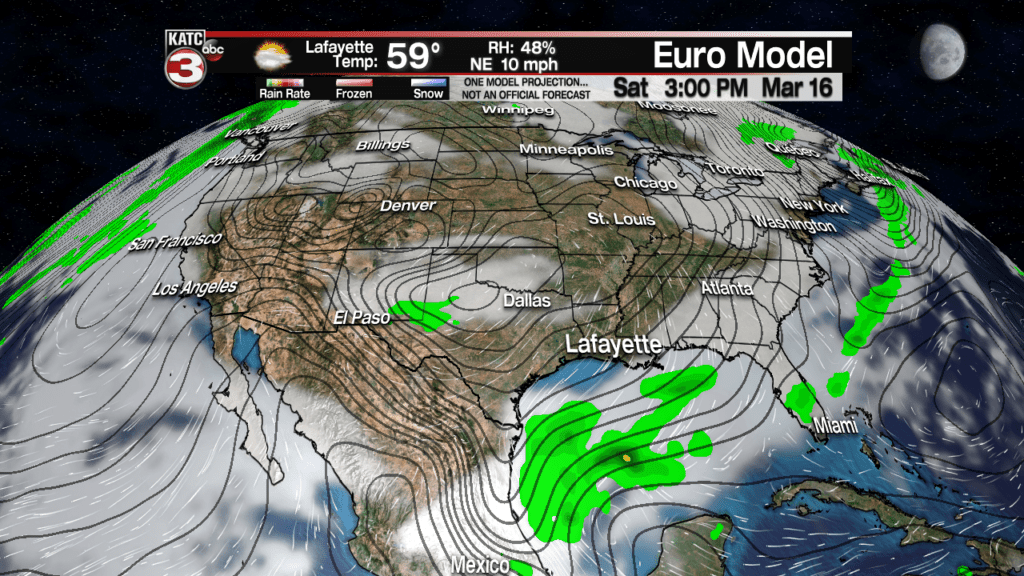 For now the weekend looks mostly dry…but certainly cool with lows at night dropping back down into the low to mid 40s…we should stay well above the “frost” zone this time around.

See the latest 10 Day Forecast for the daily details. 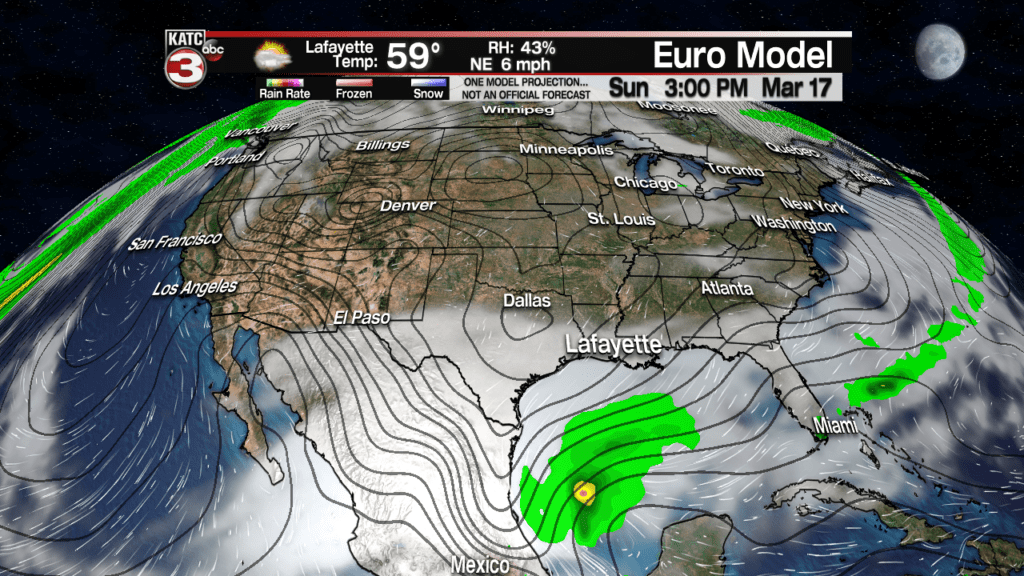