Freeze Warnings are posted for all of Acadiana for Tuesday morning with temperatures dropping into the upper 20s to lower 30s across most areas by morning. 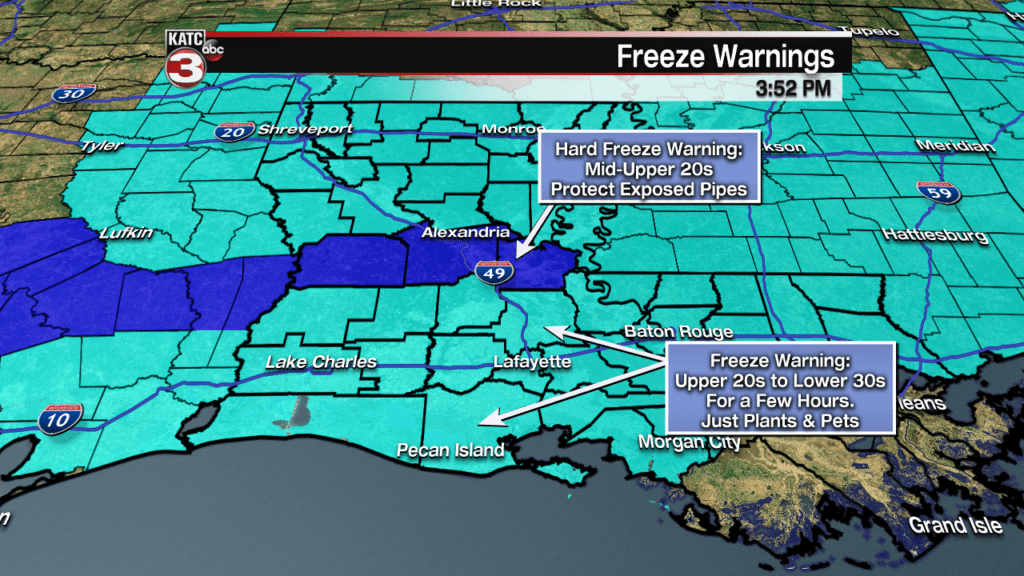 In the near term, some shower activity, associated with an upper level on the radar late this afternoon, was moving through Acadiana during late Monday afternoon and should depart the area by 9pm.

Some of the shower activity may have some sleet pellets mixed in but there will be no accumulation.

Some of these showers may impact portions of the Queen’s Parade in Lafayette Monday evening, but rain chances will be in the 30%-40 range, primarily early in the parade, and activity will generally be light.

More importantly it will be cold for the Queens’ Parade in Lafayette tonight and for all of the festivities for our Mardi Gras. 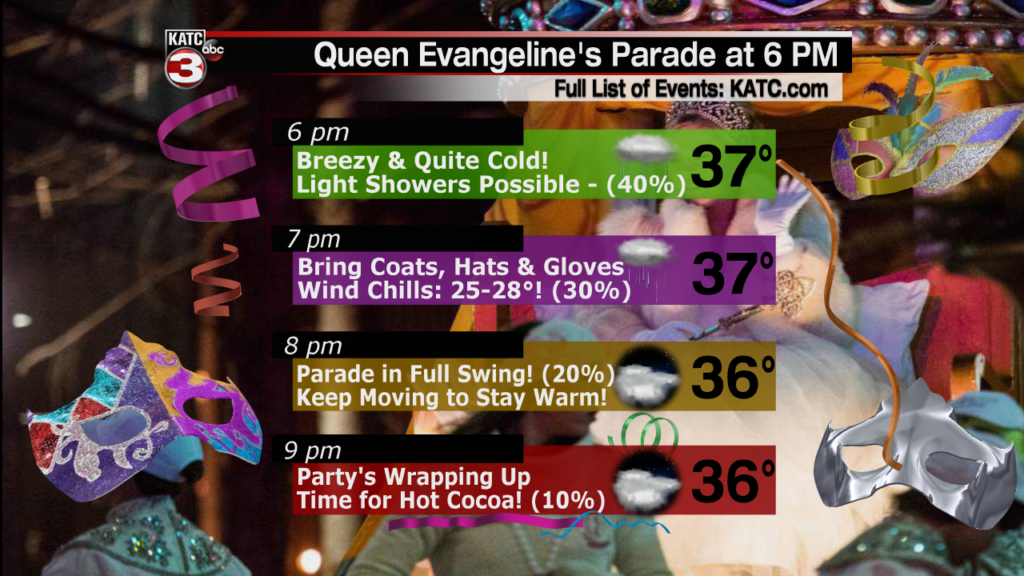 Lows by Tuesday morning will be highly dependent on lingering cloud cover…if we clear out we’ll see the readings pictured below…but if clouds linger, temperatures will be several degrees milder.

Look for most readings to be in the upper 20s to lower 30s Tuesday morning. 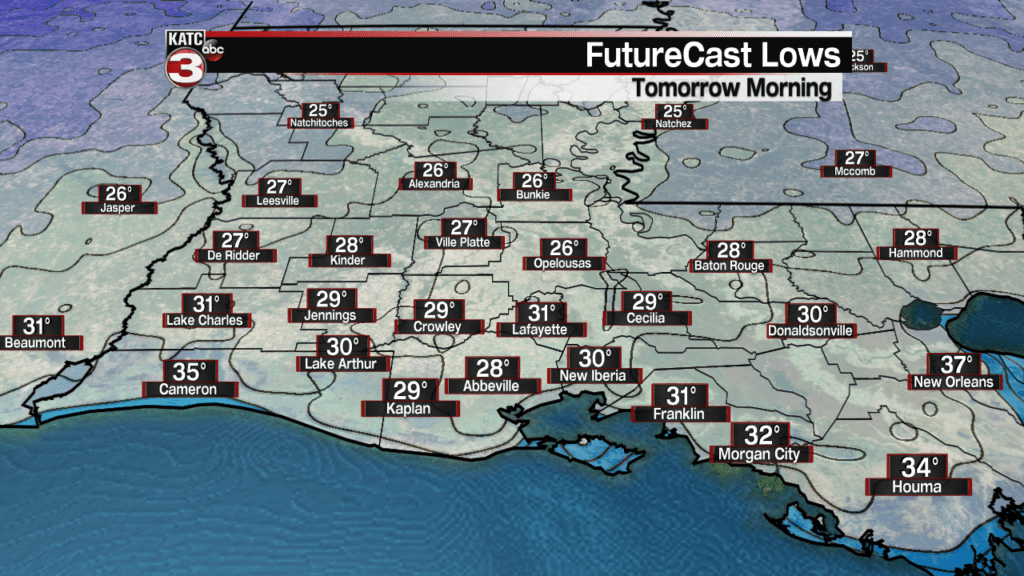 Nonetheless, protect the plants and pets (over the next two nights), and with a hard freeze warning for Central Louisiana, it may be a good idea to protect the exposed pipes in the northern most portions of Acadiana, just in case.

I’m betting that the clouds and the “mixing” from breezy winds, will probably lead us to temperatures a few degrees warmer than indicated.

And it just won’t be the temperatures, breezy north winds will bring wind chills down to the low to mid 20s for the start of our Mardi Gras, so dress warmly and in layers to protect yourself from the cold. 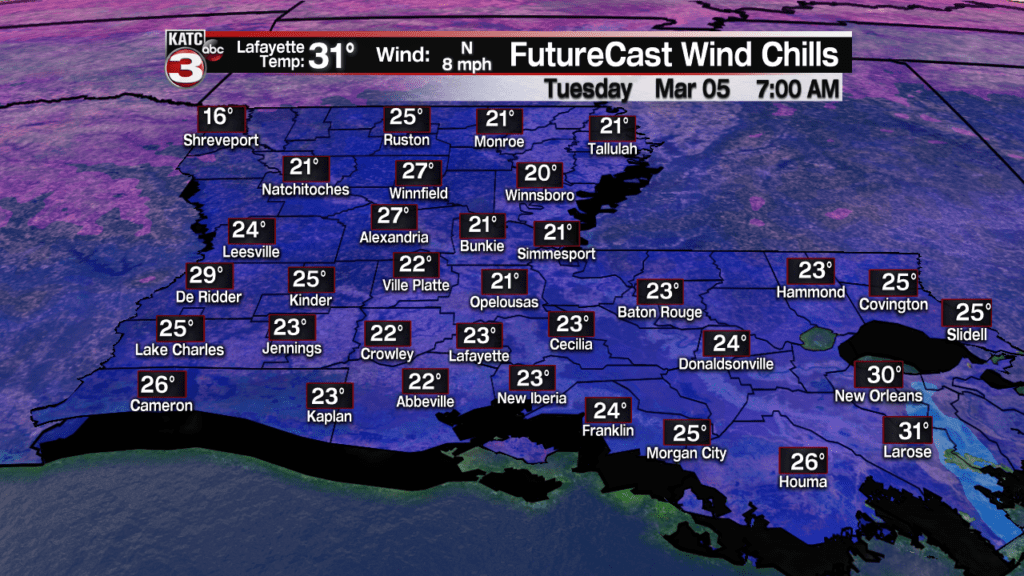 We should see the clouds lift during the day Tuesday, which may lead to some intervals of sun which should make it feel better. 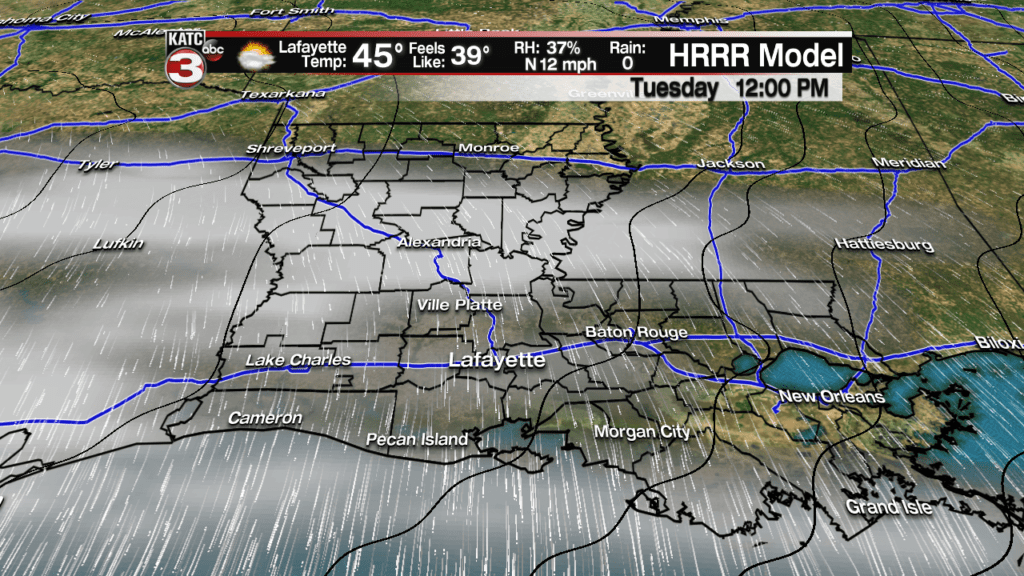 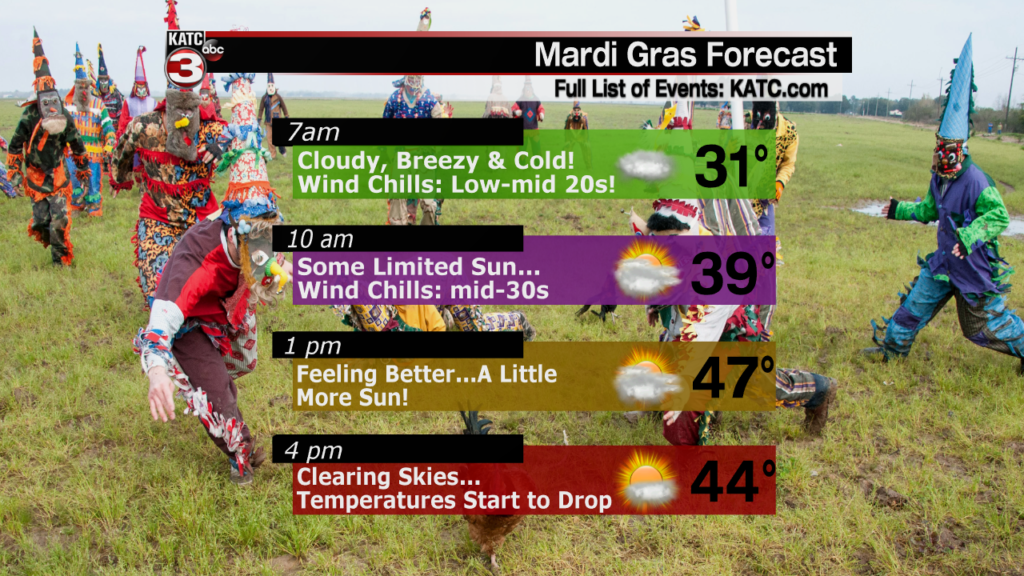 Skies will clear Tuesday night with temperatures heading for the freezing mark or slightly below. And with lighter winds, it will likely be quite frosty, and perhaps picturesque!

Wednesday will be a mostly sunny and cool day, with temperatures warming into the mid-50s.

And after just 3 sunny days in Acadiana in February, the sun Wednesday will be very welcomed…but unfortunately, it will be a short visit.

Clouds will return Thursday into Friday with milder temperatures (in the lower 60s Thursday and lower 70s Friday) with our next frontal system likely to bring a good chance of showers and storms Saturday. 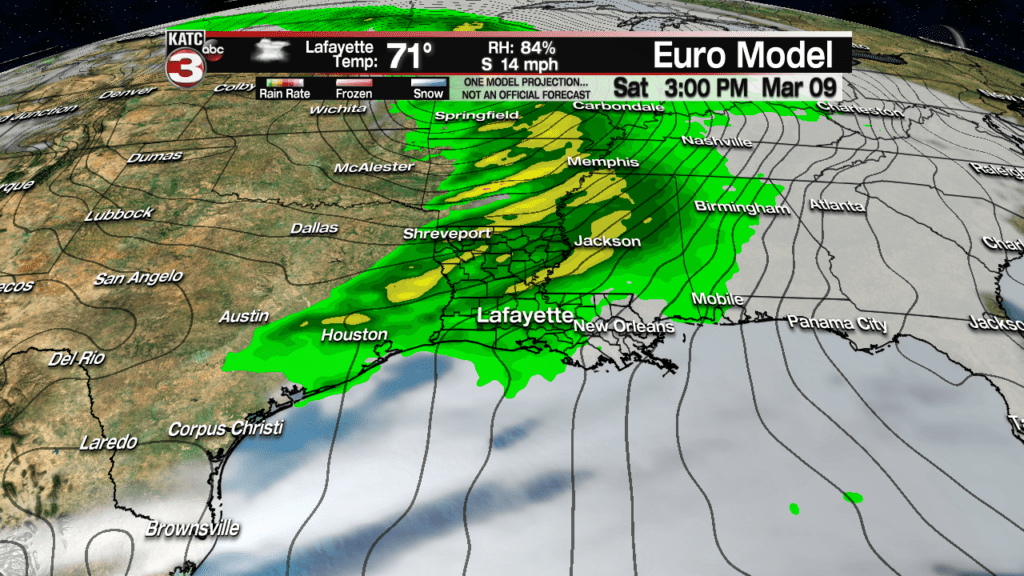 There could be a severe weather element to our next weather-maker Saturday but whether it will be here in Acadiana, or northeast of the area remains to be determined.

Sunday should be drier, but clouds will likely linger ahead of more expected clouds and rain shower activity at least through mid-week.