Acadiana will experience a breezy, warm and humid overnight period into Saturday morning before showers and storms arrive in the afternoon out ahead of a Pacific cool front. And some storms Saturday could be severe.

Look for periods of mist, drizzle and a few light showers overnight, with rain chances no higher than 30%.

The Krewe De Canailles Parade should be fine…but it won’t be a good “hair” evening for most, with the high humidity, breezy south to southeast winds and the aforementioned sprinkles. 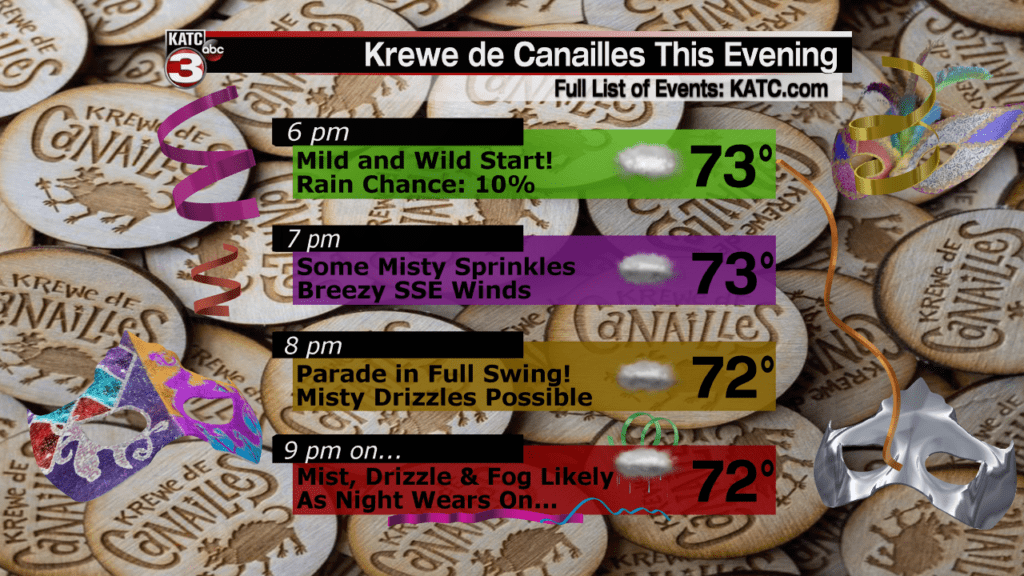 Temperatures will hold in the 70s through Saturday morning.

Some fog will also be in the mix for the area overnight, but the fog will be predicated on whether the winds are not too gusty from the south.

Tomorrow will be a more dynamic day with gusty southerly winds near 15-22 mph ahead of a cool front that will have some severe weather elements with the system. 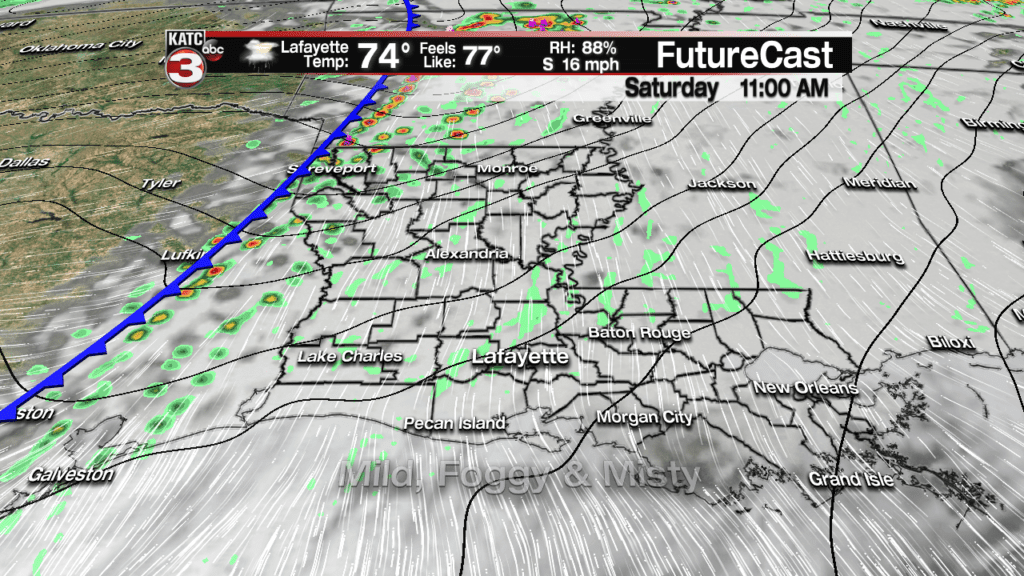 Model data indicates that best chance of storms will arrive by early afternoon with showers and storms rapidly traversing eastward, and possibly ending by late afternoon or early evening. 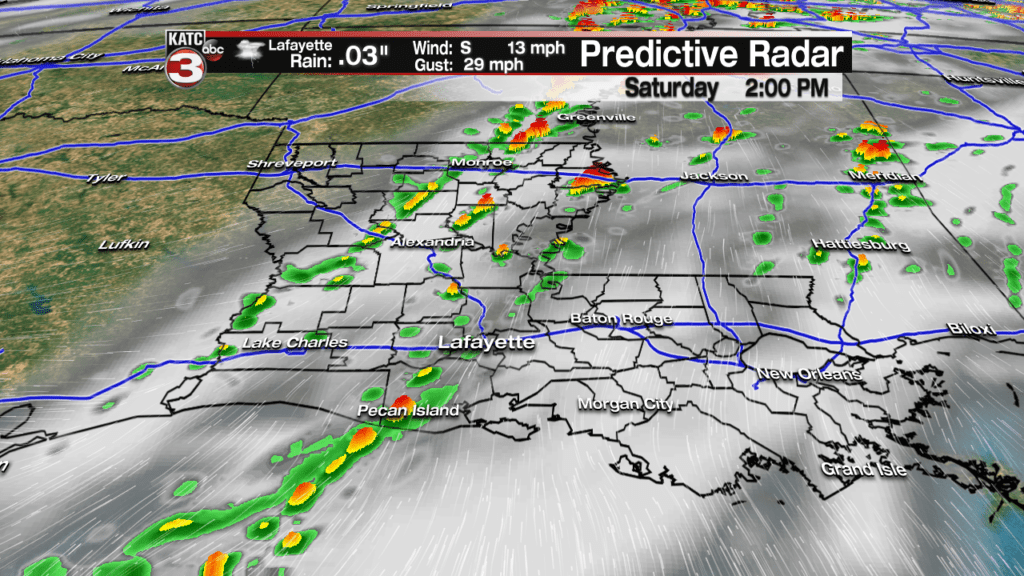 Highest rain chances closer to Lafayette should be from mid to late afternoon, and hopefully ending, or winding down just in time, for the Rio Parade starting at 6pm. 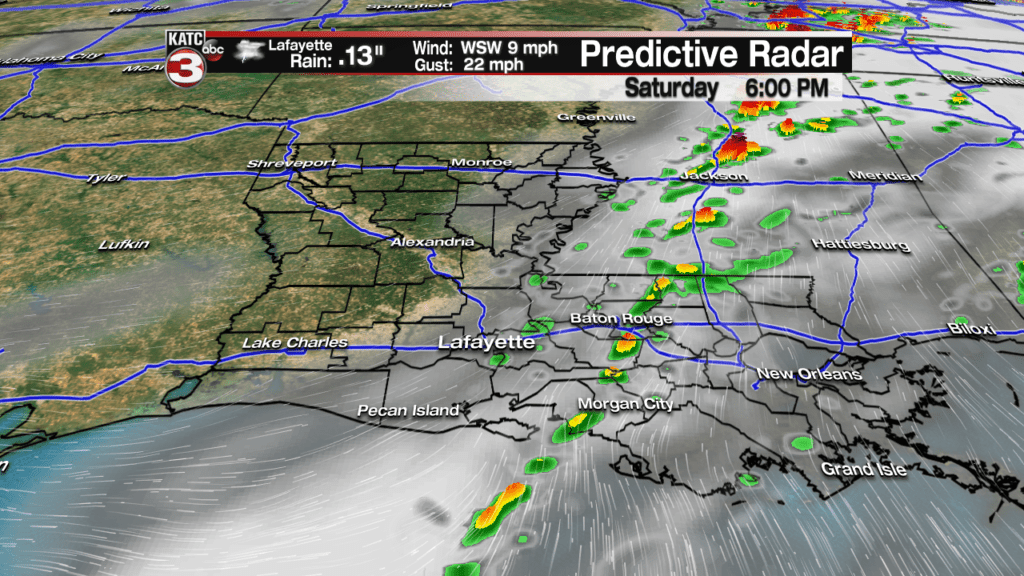 Per the Storm Prediction Center (SPC), there may be a marginal to slight risk of severe storms (levels 1 to 2 on the scale of 5) for Acadiana, with the greatest risk in northern portions of Acadiana. 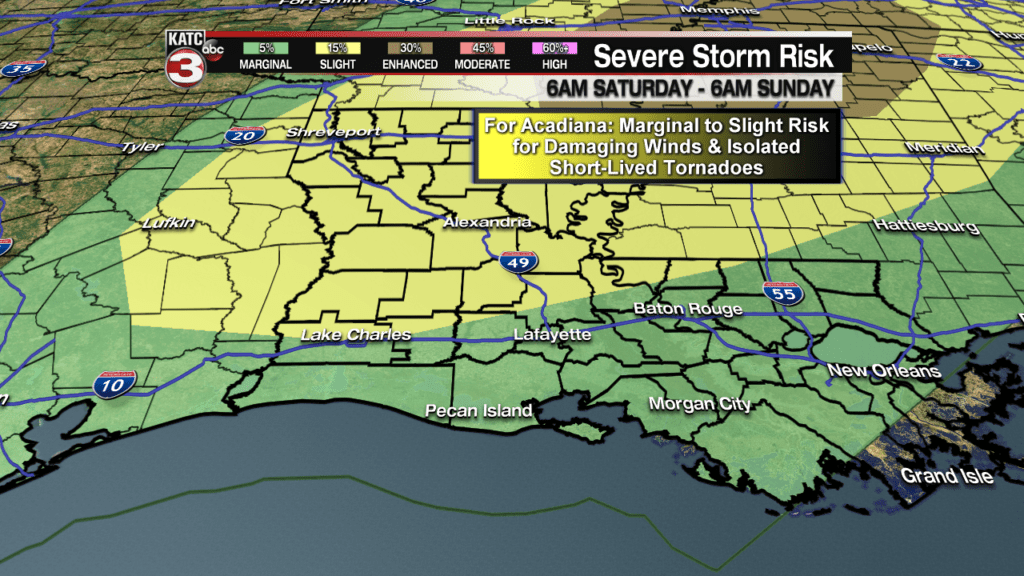 The main threat would be for the possibility of a couple of storms becoming intense enough to produce damaging winds and/or an isolated short-lived tornado.

Follow the storms via the latest KATC Doppler Radars and Satellite Imagery:

While the models do look underdone with respect to their storm forecast (and coverage) for the area Saturday, it still appears that a much greater risk of severe storms will develop across portions of Eastern Arkansas, Northern Mississippi into Tennessee and perhaps Northwestern Alabama tomorrow afternoon into the evening hours.

Super cell storms may develop in the “enhanced area” and could produce low-level mesocyclones more capable of producing damaging winds and perhaps some strong tornadoes, of EF2 intensity or greater. 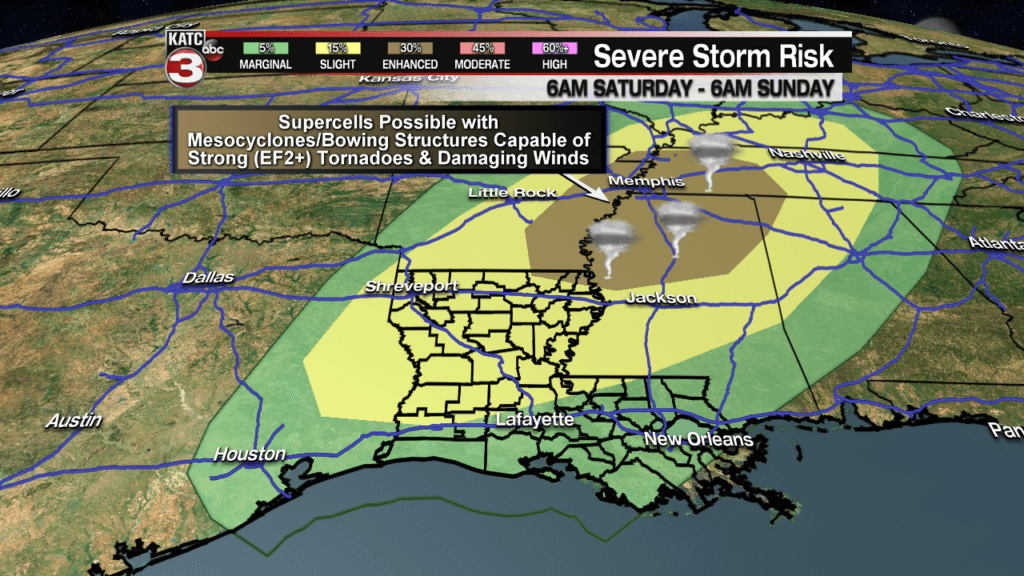 The highest risk of severe storms will be in areas that have received more than 6-8″ of rain in spots in recent days, with more falling Friday night, so the threshold for winds to uproot trees will be much lower in this region.

Meanwhile for Acadiana, light rain totals can be expected once again, with most of us seeing 1/4″ of rain or less Saturday, but a few isolated spots could receive up to an inch. 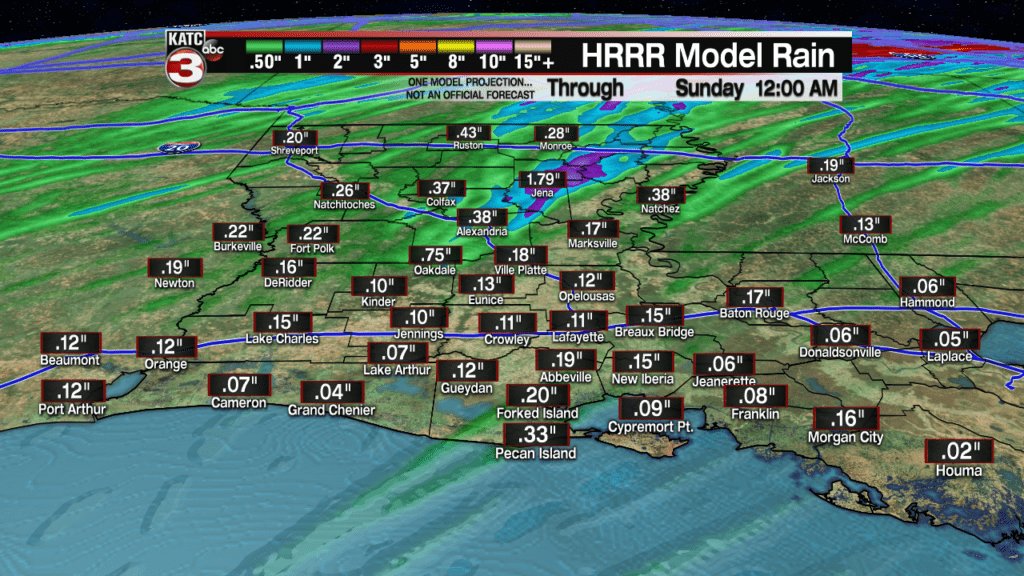 Temperatures Saturday will likely top out in the mid-upper 70s before cooling into the 60s during the evening. 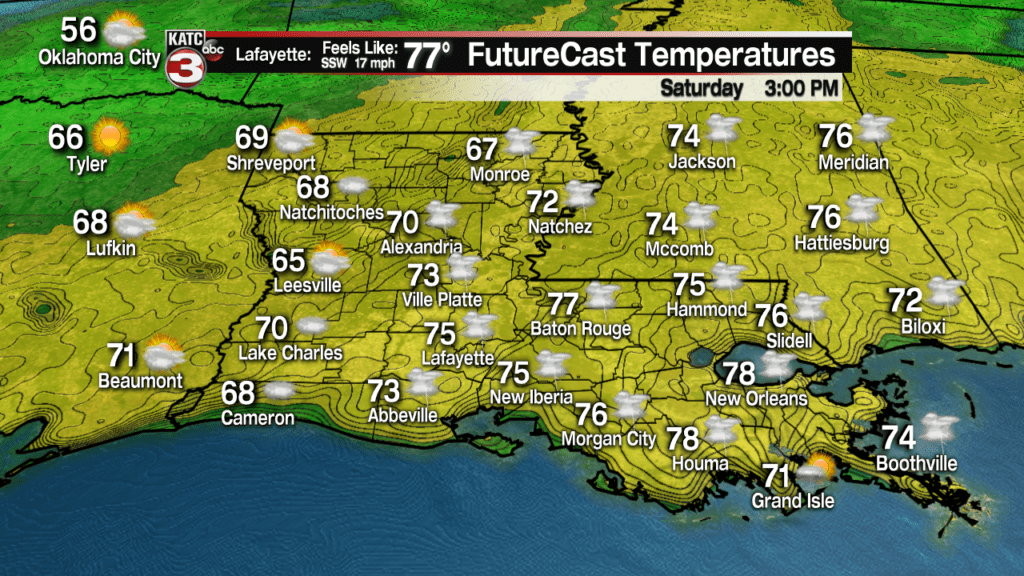 Skies will gradually clear Saturday night with temperatures cooling into the upper 40s to lower 50s. 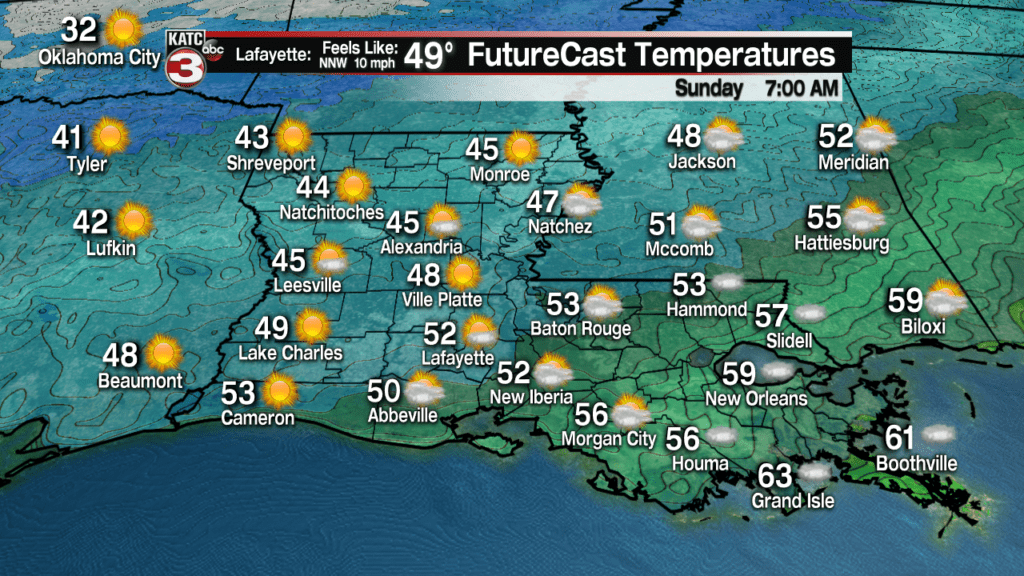 Finally, a mostly sunny and seasonably pleasant day is on tap for Sunday…with mostly fair to partly cloudy weather likely to continue into Monday.

Highs Sunday and Monday will be in the mid-60s. 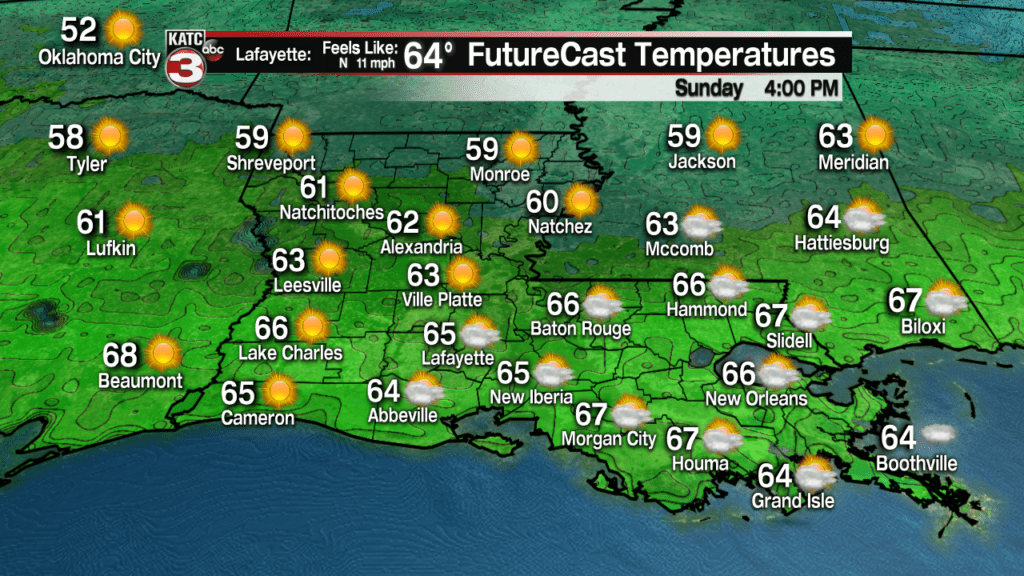 Moving into next week, the Euro model is not nearly as wet and cloudy as the GFS model, so Friday’s 10 Day Forecast is heavily “Euro-based” for now.

Do expect the possibility of some showers mid-week, then cooler temperatures later in the week into the beginning of the Mardi Gras weekend.

While way to early to tell with any kind of accuracy, there may be milder conditions Sunday and a few showers developing by Monday (Lundi Gras)…which could lead to cooler and not necessarily drier conditions into Fat Tuesday…we are a long way away from getting a true beat for our Mardi Gras weather, so stay tuned and enjoy this weekend!