Acadiana can expect scattered showers and a few thunderstorms to develop overnight toward daybreak ahead of a cool front that will cross the area early Tuesday.

Scattered showers are expected to begin to develop after midnight in the mild air mass ahead of the cool front with best rain chances coming just before the front arrives, between 3-7 am, per the latest Predictive Radar model. 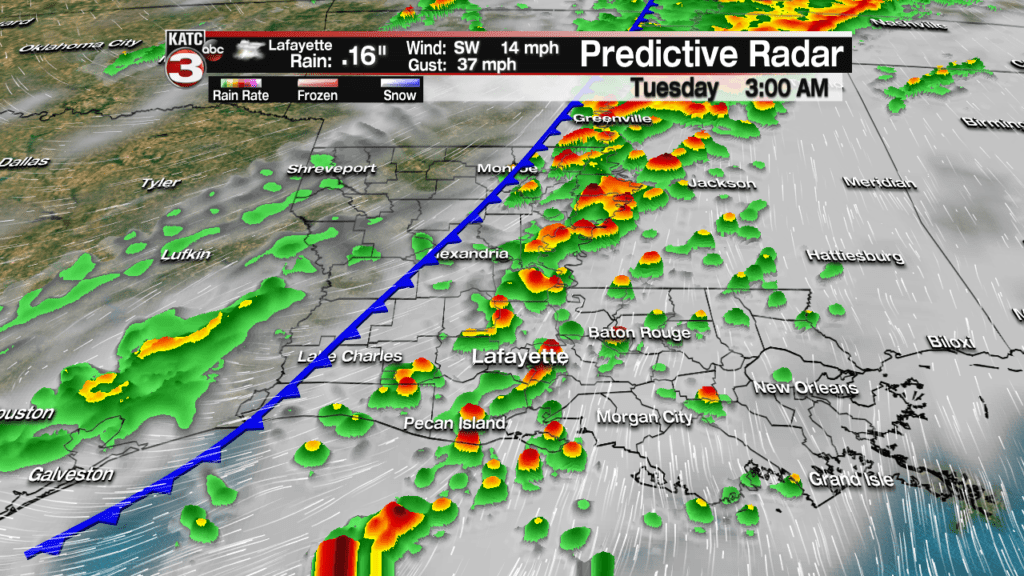 There will continue to be some showers behind the front through mid-morning Tuesday, but by the afternoon drier conditions will move into the area with even the chance of some limited sunshine, especially across western sections of Acadiana by late afternoon. 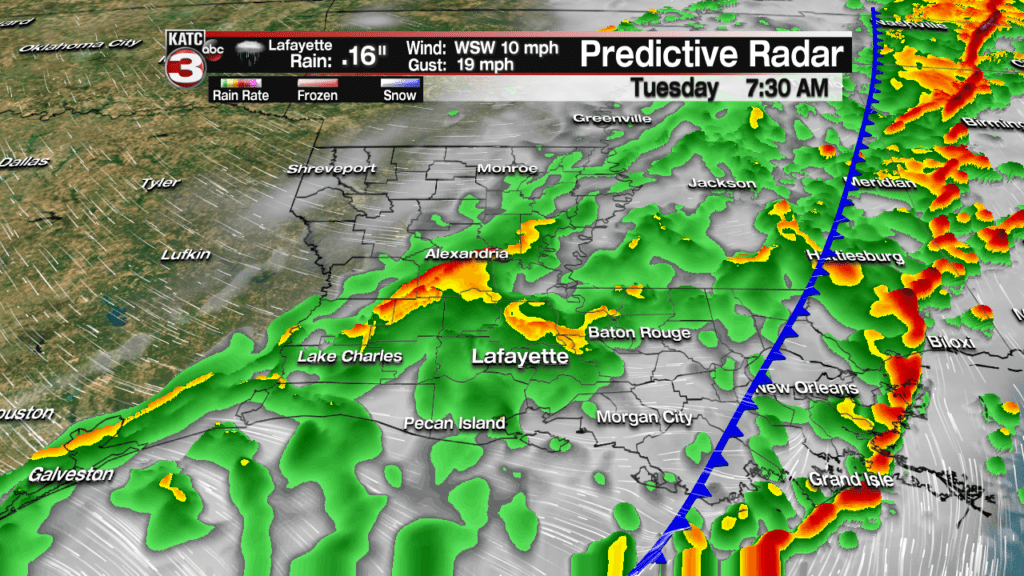 With a relatively dry last three weeks of January into the first week plus of February, Acadiana really could use a good soaking, but showers will be likely moving quickly and other than a few isolated spots, expect rainfall of less than 1/4″ for most areas.

The best chances at a more substantial rainfall in spots will likely be in St Martin, Iberia and St Mary Parishes, where rainfall could approach the 1/2-1″ range. 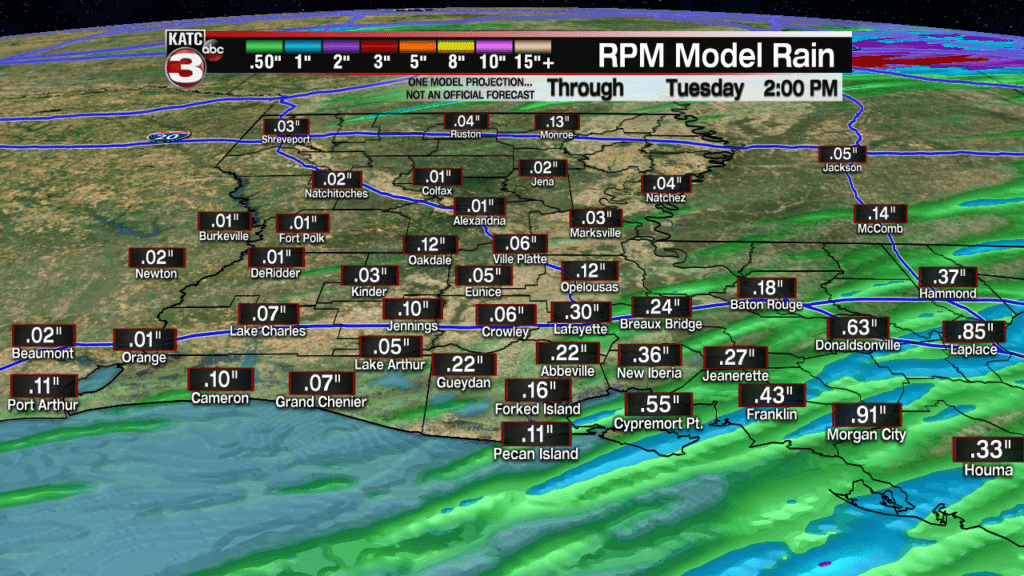 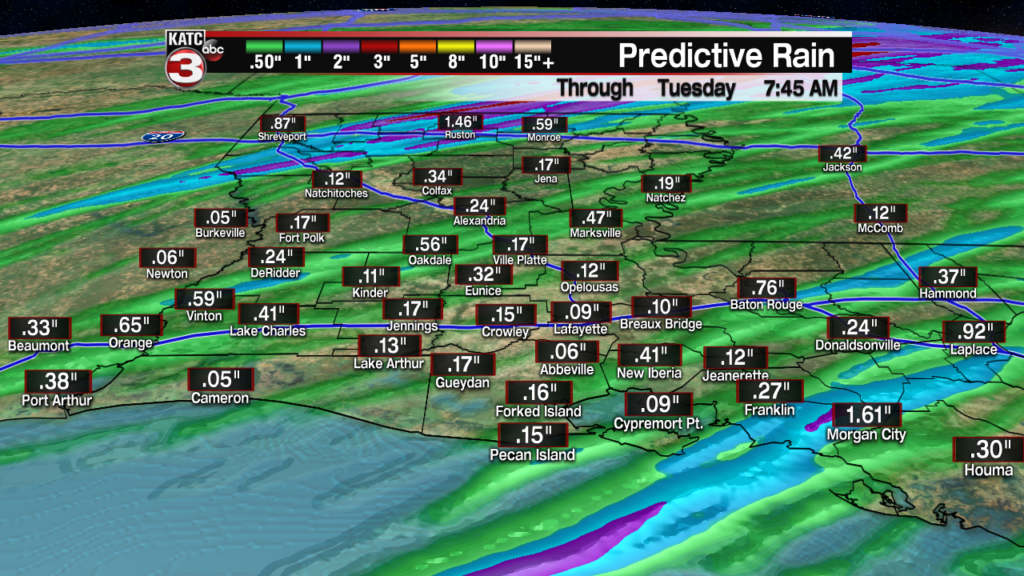 Breezy conditions will follow the front into Tuesday afternoon, with the cooler temperatures likely to lag behind until evening when temperatures drop more sharply to more winter-like numbers. 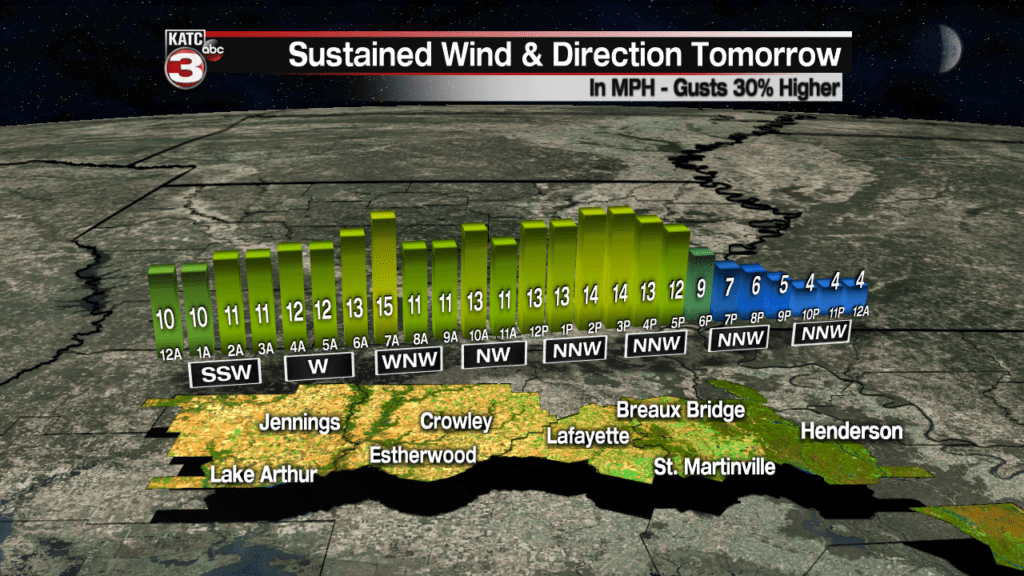 Temperatures will likely stay in the 60s most of the day Tuesday but will begin to drop smartly into the evening.

Low temperatures by Wednesday morning will be back in the winter-like upper 30s to lower 40s, but fortunately winds will die down by daybreak, so wind chill won’t be as much of an issue. 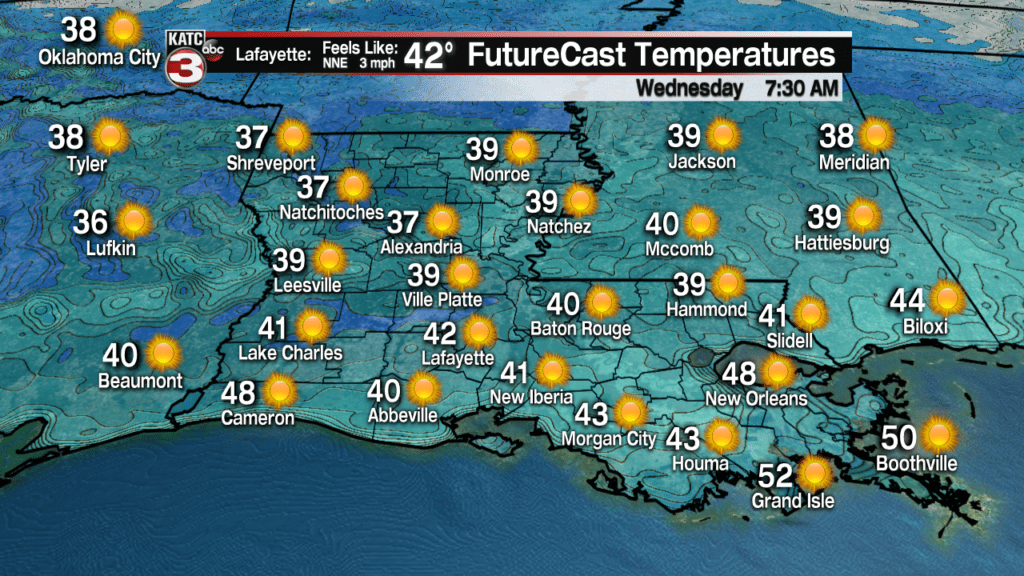 And for the first time in weeks, Acadiana can expect a sunny and pleasant day Wednesday with seasonable highs right near “normal” for the time of the year, which is in the mid-60s.

The sunshine won’t last but a day as clouds and milder temperatures return for the latter part of the week.

Once again, forecasting beyond 4-5 days in the expected pattern continues to yield wild difference among the primary models, with the Euro favoring mild weekend weather (currently reflected in the 10 Day Forecast), while the GFS is some 15 degrees colder.

The differences are in deference to an active sub-tropical jet stream that will stay primarily north of the area, so if any chilly air slips into the region, it would be rather short-lived.

Interestingly enough, the models are converging on cooler than normal conditions developing mid-next week but the GFS is more extreme, suggesting sub-freezing temperatures and the possibility wintry precipitation nearby, while the Euro remains much milder and thus no winter weather.

To date over the last few weeks, the Euro has been a full cycle ahead of the GFS Model, and thus the reasoning for the current forecast beyond 5 days leaning more heavily toward the European Model.