The coldest readings of the fall season have arrived across Acadiana, and it looks like a done deal that we will see our first freeze of the season Wednesday night into Thursday morning.

It won’t be a pipe busting cold, but it will be a killing freeze for uncovered tender vegetation (and make sure the pets have a warm place stay).

But it will be the coldest readings for Acadiana (mainly by Thursday morning) since the January 2018’s deep freeze…but fortunately it will not be that frigid.

In the near term, thanks to clouds staying locked in across the area, temperatures will range from the lower to mid 30s across the Acadiana area. 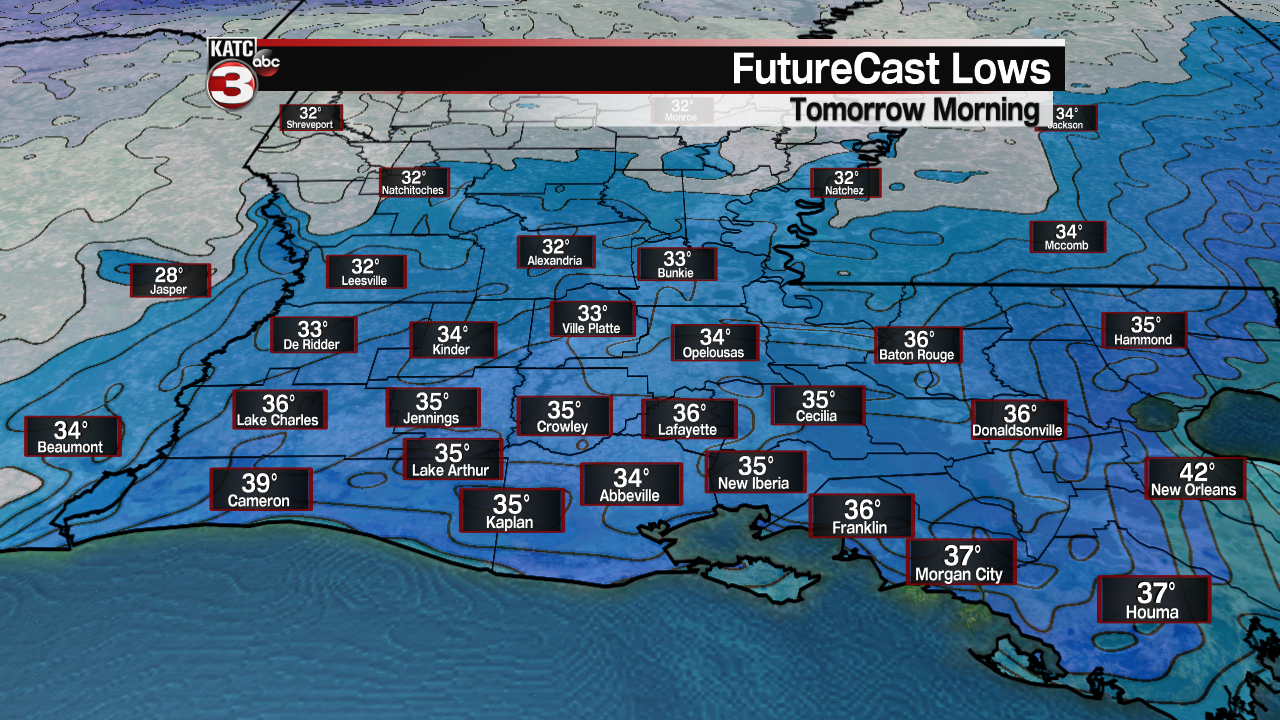 And because temperatures will be close to the freezing mark in northwestern sections of Acadiana, the National Weather Service has issued a freeze warning for these areas. 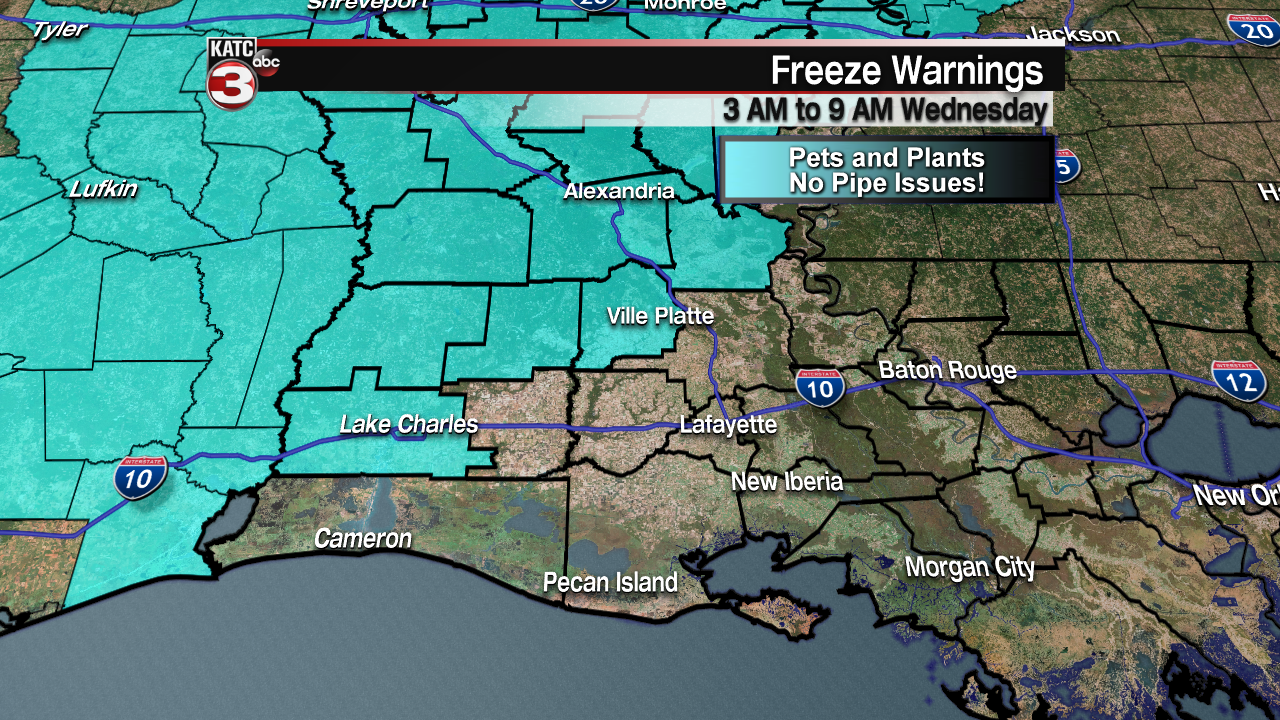 By morning, wind chills will be hovering in the upper 20s to lower 30s, so bundle up! 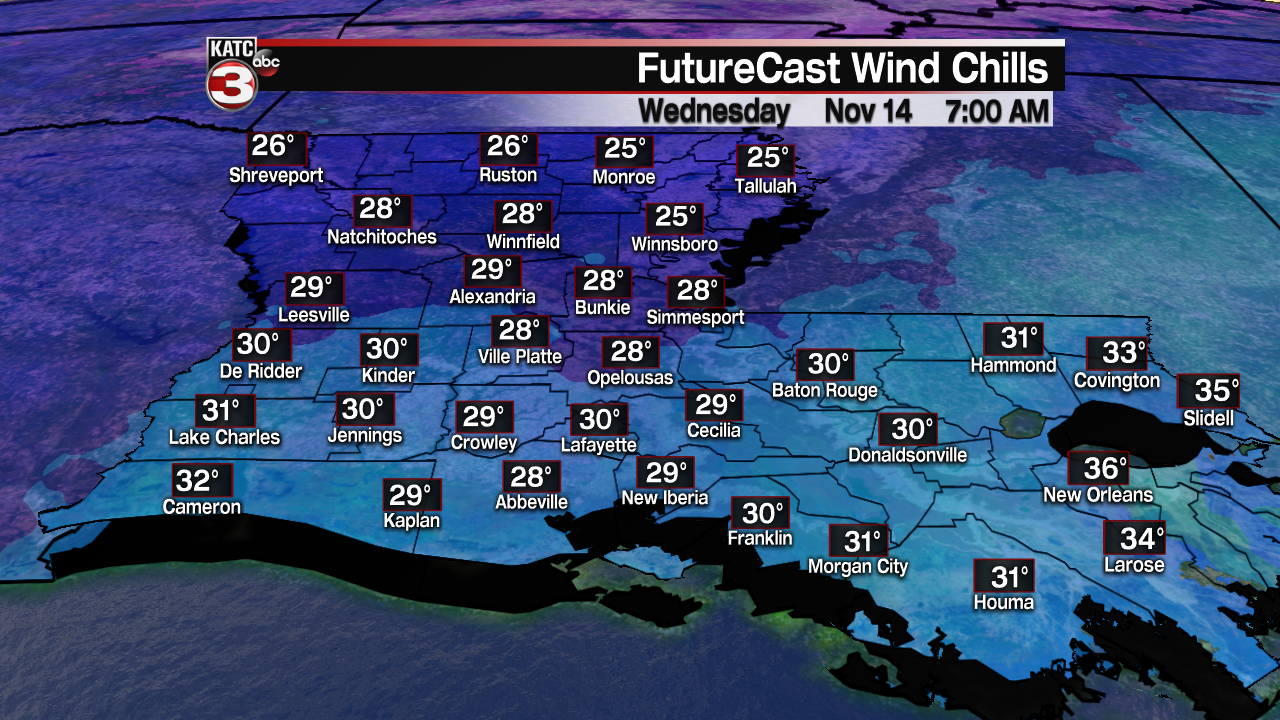 Clouds will stay locked in for most of the Acadiana area Wednesday, but they should begin to thin from west to east across western sections of Acadiana during the afternoon, and the rest of the area into Wednesday evening. 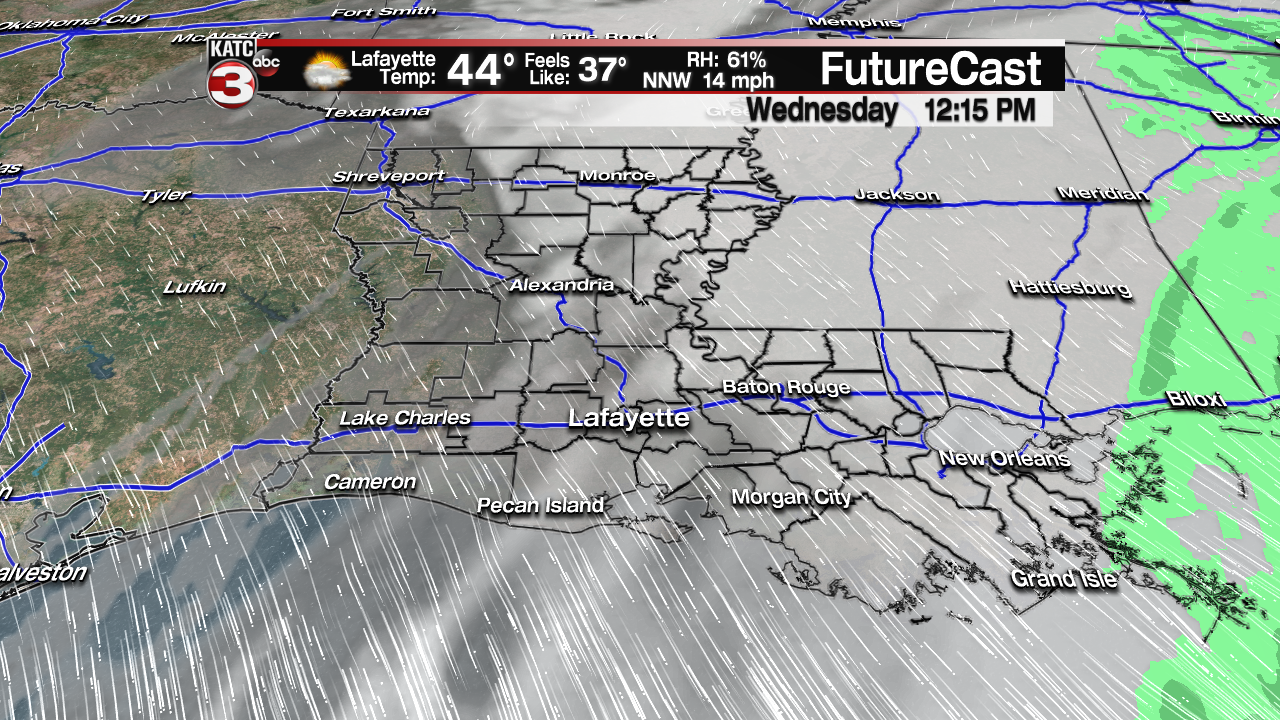 As a result of the lingering cloud cover, high temperatures Wednesday will continue mostly in the mid-40s accompanied by wind chills in the 30s, although N/NW winds Wednesday will not be as stout as they have been over the last 24 hours. 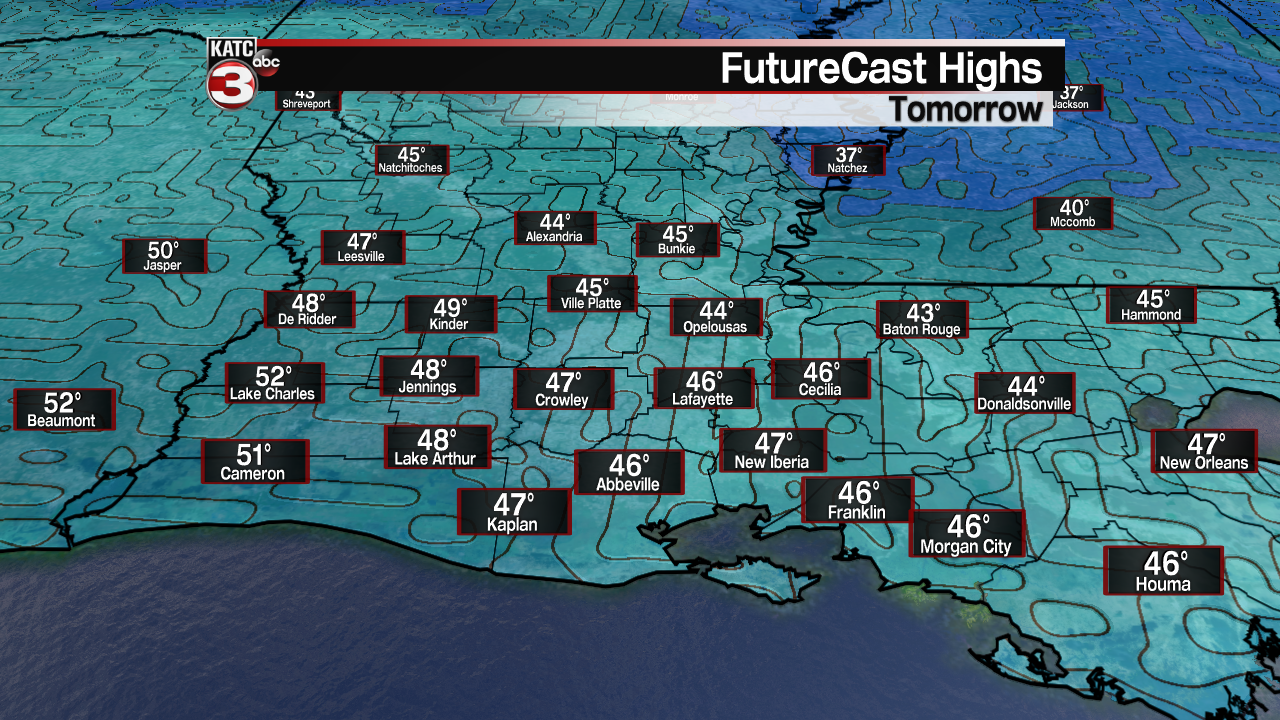 With clearing skies Wednesday night, the stage for temperatures to drop into the upper 20s to near 30 Thursday morning…so expect a freeze warning for the entire area then. 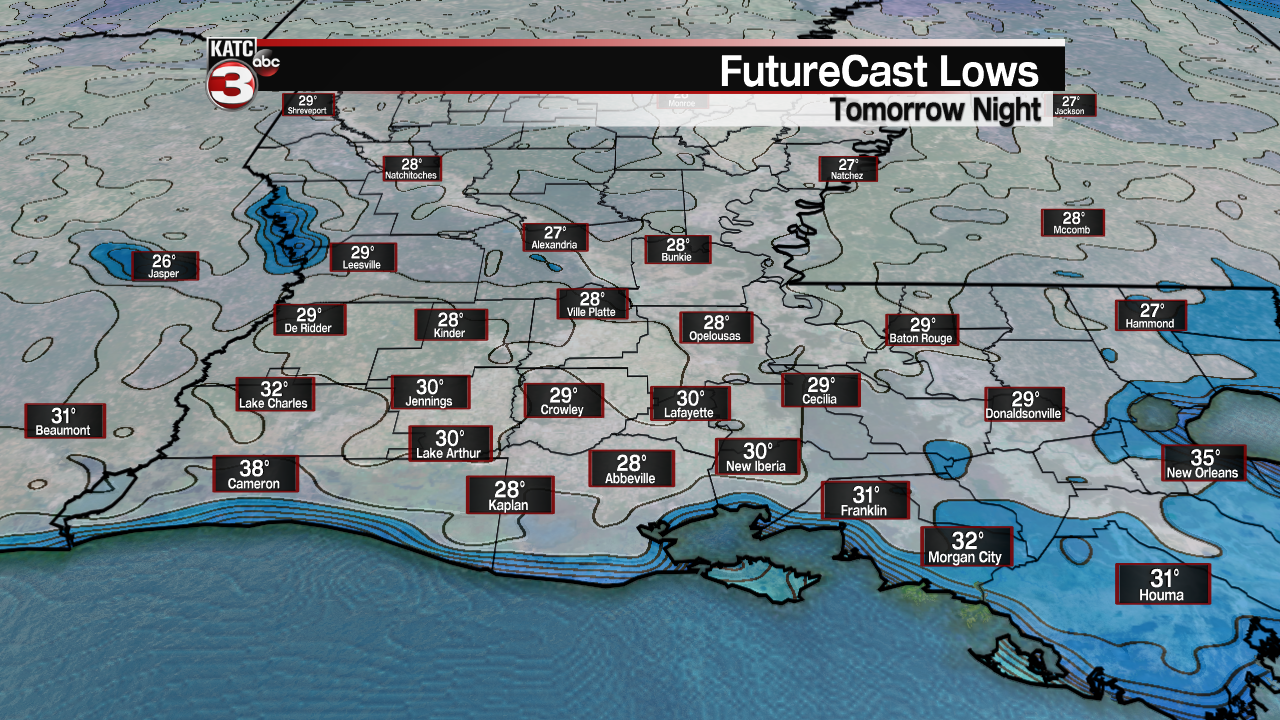 These cold temperatures should NOT threaten our pipes.

It would probably be a good idea however, to cover your plants this Tuesday night just in case, and have them certainly covered Wednesday and Thursday nights, with a freeze very likely Thursday morning, and frost a good bet Friday morning.

Full (and welcomed) sunshine will return to the area Thursday with temperatures reaching the mid-50s for the afternoon. 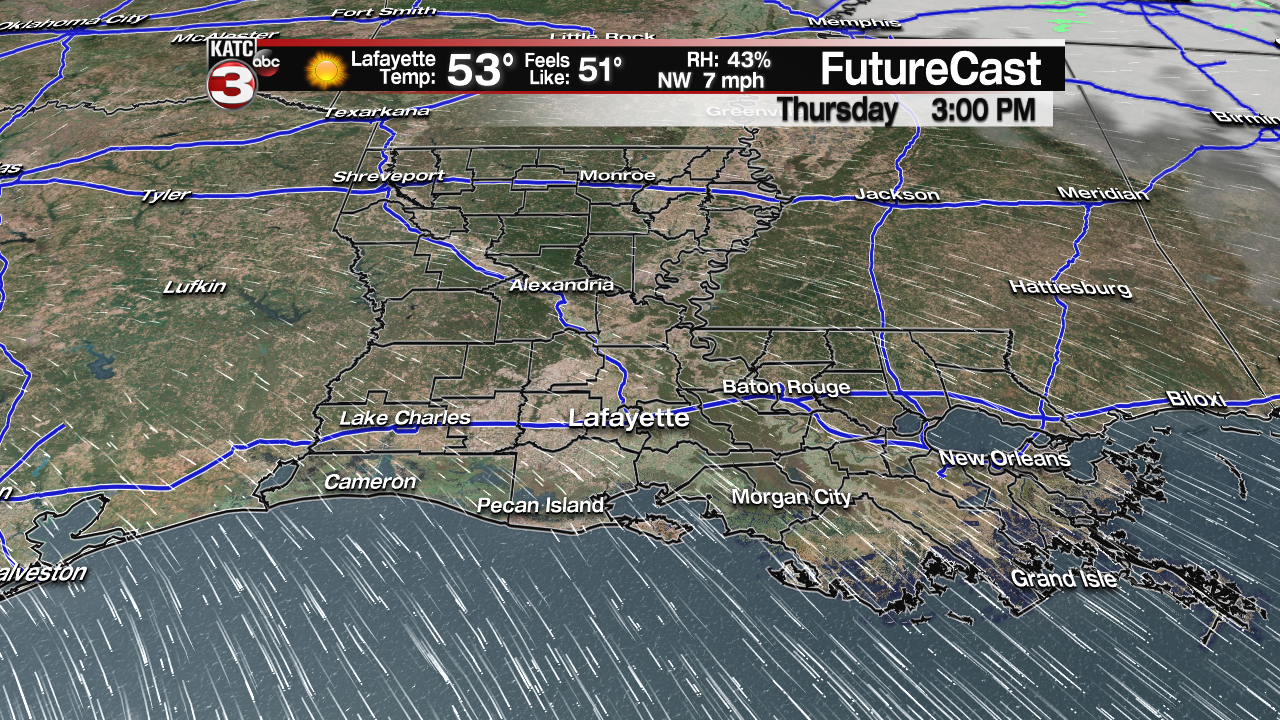 Milder daytime readings in the lower 60s Friday and mid-upper 60s Saturday, and near 70 Sunday are expected under fair to partly cloudy skies.

After a couple of partly to mostly cloudy and mild days early next week, Acadiana’s next weather-maker will bring a good chance of rain and storms for the following Wednesday and/or Thursday.