After a very hot weekend with highs in the 90s, we may see a light at the end of the tunnel with cooler weather later this week. Unfortunately this will be at Florida’s expense. Tropical Storm Michael is expected to become hurricane Michael as it churns over the Gulf of Mexico, eventually aiming toward the Florida Panhandle. A deep trough over the west will progress eastward, eventually bringing a front into the area later in the week. 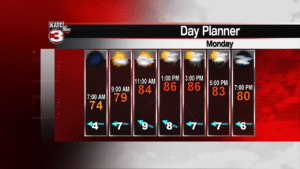 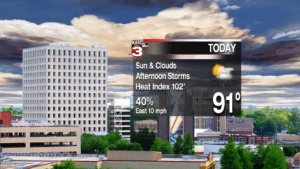 Expect more of the same type of weather we’ve seen this month. So far each day in October has reached or exceeded the 90 degree mark. Expect a high of 91 degrees today under partly cloudy skies. Heat index values will reach 100-103 degrees as dew points remain in the low to mid 90s. There should be enough instability to spark off a few afternoon showers and thunderstorms. These could produce brief heavy downpours, but no widespread problems are expected. Winds will remain out of the east at 10-15 mph. Perhaps a slightly better chance for rain on Tuesday as Hurricane Michael moves into the eastern Gulf. Because of the pressure gradient between Hurricane Michael and the front to our west, expect breezy conditions with winds up to 20mph. Small Craft Advisories will likely be raised over the nearshore waters Tuesday. 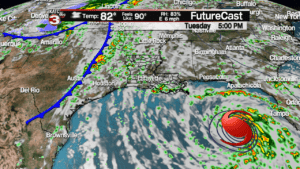 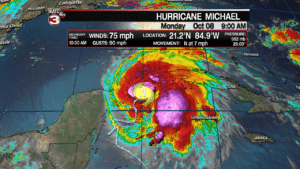 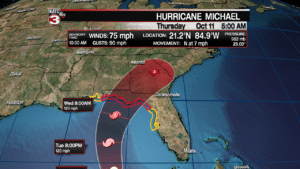 The front will slide into the area Wednesday. Showers and storms will be likely with breezy conditions continuing. Showers and storms will gradually end on Wednesday, but cooler air will lag behind the front, so no immediate relief from the heat just yet. We’ll start the cool down Wednesday night into early Thursday morning as lows will drop into the 60s for the first time since May. Michael is now a hurricane and will eventually reach land well east of the area late Wednesday afternoon into the early evening hours. Hurricane Michael is expected to be  Major Hurricane at landfall sometime late Wednesday. Acadiana will feel more of the effects from the front, and will have minimal impacts when it comes to Michael which should be a hurricane.

Thursday into the Weekend: 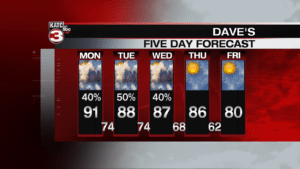 Pleasant fall like conditions are expected for the weekend. Although we’ll still reach the low to mid 80s for highs, overnight temperatures should drop closer to 60 degrees. Dry weather is expected into the early part of the weekend, so upcoming festivals around the region should be fine. Another front will approach the area late into the weekend, so a few more clouds are expected by Sunday afternoon.

We may start the week a bit unsettled with a front moving in, but we may see some overnight temperatures in the 50s early next week with highs in the upper 70s. A few showers are possible Monday, but Tuesday and Wednesday of next week look fantastic!