Tropical Storm Michael is getting stronger in the Caribbean

7PM Update: Tropical Storm Michael keeps getting stronger as winds are now up 60 mph and is slowly picking up speed to the north at 5 mph.

Sunday afternoon hurricane hunters flew through Tropical Storm Michael and have found that winds are now up to 50 mph and the storm is slowly marching to the NNE at 3 mph.

Tropical storm warnings have been issued for the western side of Cuba and for areas along the the Yucatan Peninsula as heavy rains and gusty winds will hammer those areas on Sunday.

For the latest look at Tropical Storm Michael here is the current Tropical satellites.

Monday afternoon/evening Tropical Storm Michael will emerge into the southern Gulf of Mexico where it is expected to encounter favorable conditions with light shear and very warm waters allowing the storm to strengthen into a strong tropical storm and eventually become a hurricane by Tuesday.

Michael is now project to continue strengthening Tuesday and Wednesday as it moves north over the warm waters of the Gulf as the intensity forecast now shows Michael making landfall as a category 2 storm with winds of 100+ mph Wednesday afternoon near Panama City Beach, Florida. 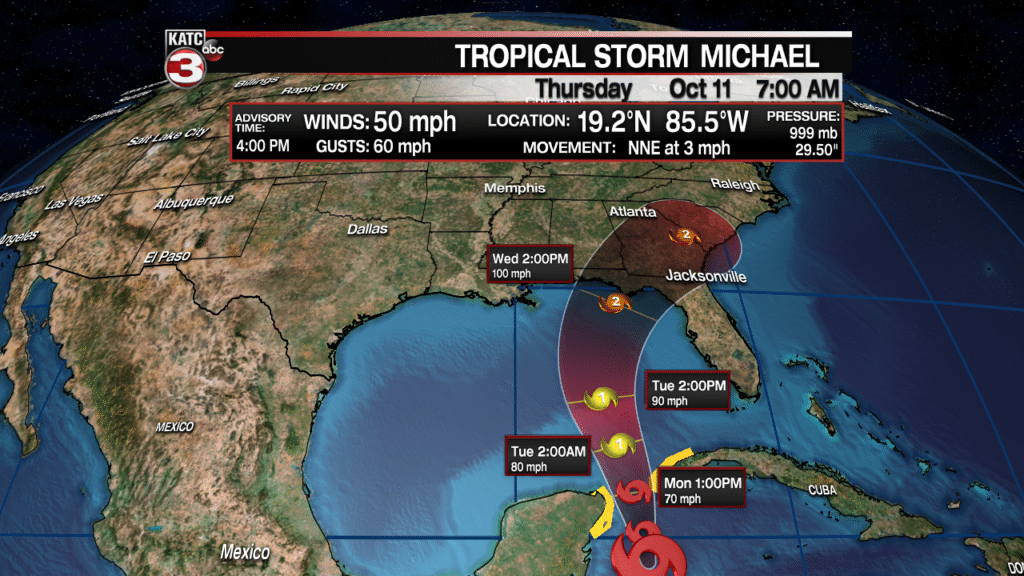 Some models are even indicating that Michael could undergo rapid intensification meaning it might become a major hurricane.

This is something we will have to watch closely as intensity forecasting is still the hardest thing to estimate with tropical systems.

After landfall the system will weaken and move up through Georgia and the Carolinas where it will produce heavy rains up to 3-6 inches in some locations.

The good news for Acadiana is an approaching cold front and trough dropping down into the lower Mississippi Valley Tuesday evening into Wednesday should help to steer Michael away from Louisiana and towards the Florida panhandle.

Thus we should be on the dry side of the storm and we will only see a few scattered showers and storms Tuesday and Wednesday afternoon.

But for those offshore this week it is going to get windy with gusts up to 40-50 mph on the oil rigs Tuesday and Wednesday will swells as high as 8-10 feet.