After another summer-like, relatively dry Friday, the chances of showers and storms will be on the increase for Acadiana this weekend.

And during the course of the weekend, a tropical disturbance in the Western Caribbean will be monitored closely as it slowly edges northwestward toward the Gulf of Mexico.

Locally, look for another partly sunny, hot and humid day Friday, with temperatures topping out in the lower 90s along with heat indices reaching up to 102-103. 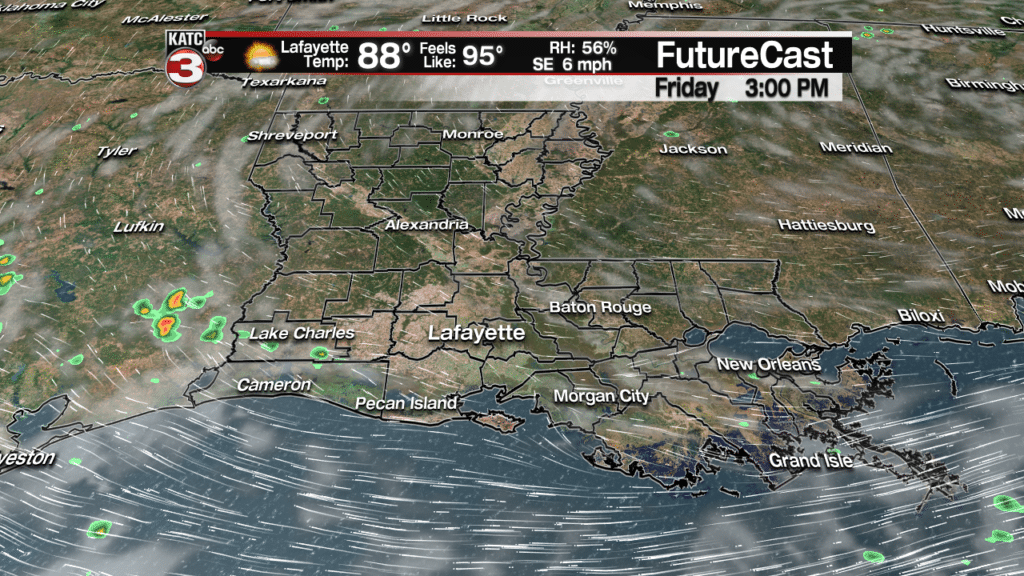 Rain chances look to stay quite slight, near 10% for our Friday, but should be increasing this weekend.

An upper ridge of high pressure that has been the dominant feature in our forecast over the last couple of days will slide eastward this weekend, opening up the door for increased tropical moisture to advance into the region, and allowing for a more unstable atmosphere. 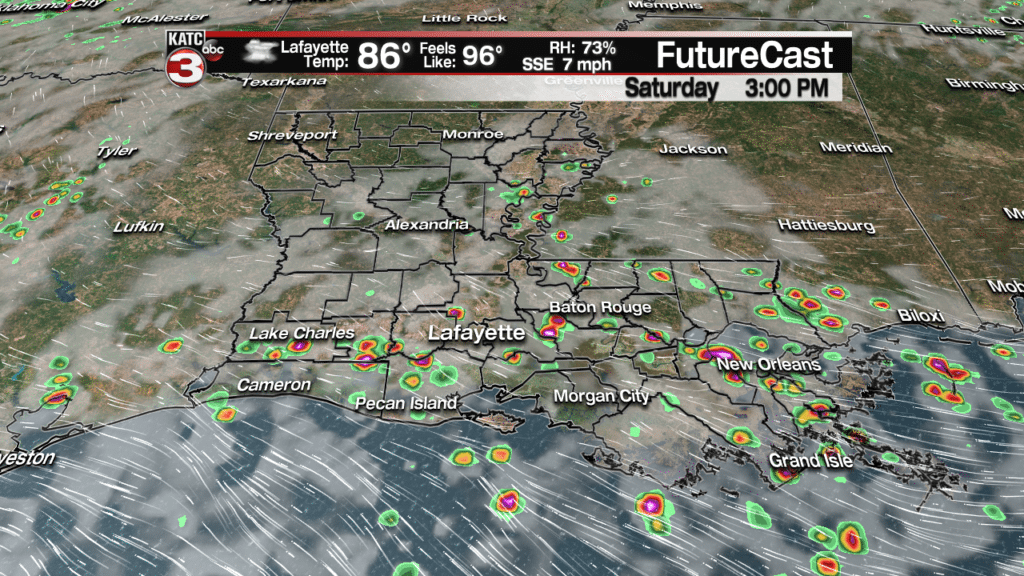 This all spells an increased chance, near 40-50%, for primarily daytime, scattered showers and thunderstorms for both Saturday and Sunday.

Highs this weekend will be closer to the upper 80s thanks to the additional clouds and showers in the forecast.

Moving into next week, it should get rather interesting with regard to the tropics and the Gulf of Mexico.

A disturbance in the extreme Western/Southwestern Caribbean, just east of Central America, is expected to slowly drift northwestward through the weekend. 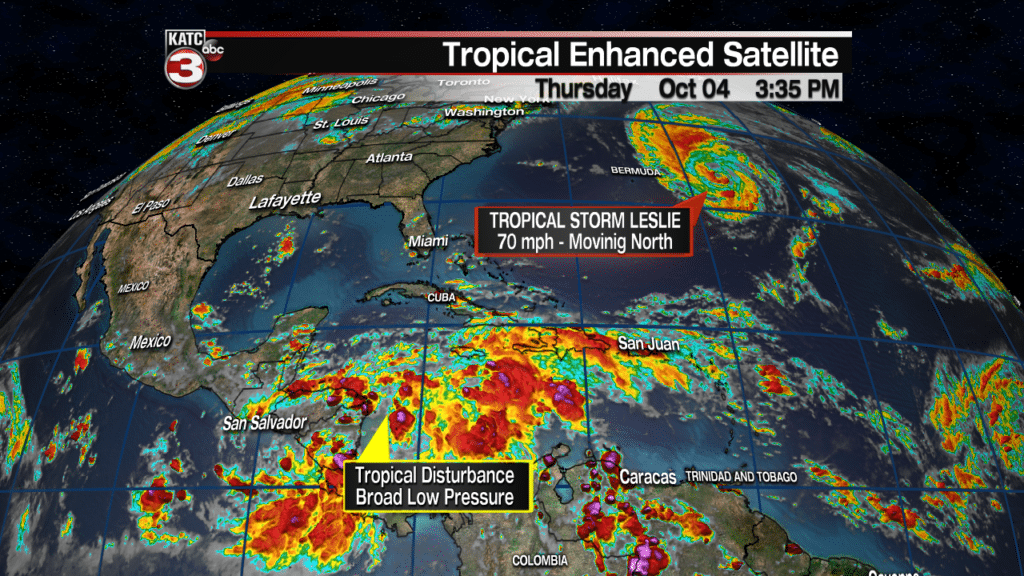 Currently upper level winds (and shear) remain quite hostile for any development…and the system could actually dissipate over land before reaching the Gulf.

But at this time, a broad and weak area of low pressure is expected to advance toward the Yucatan Peninsula by Sunday, and then into the Southern Gulf of Mexico Monday.

At the same time, upper level winds will begin to relax over the disturbance potentially allowing for development into a tropical depression and/or tropical storm by Tuesday…perhaps somewhere in the Central Gulf of Mexico.

As of Thursday afternoon the National Hurricane Center (NHC) gives this system a medium/moderate chance of development, at 40%, in the 3 to 5 day period. 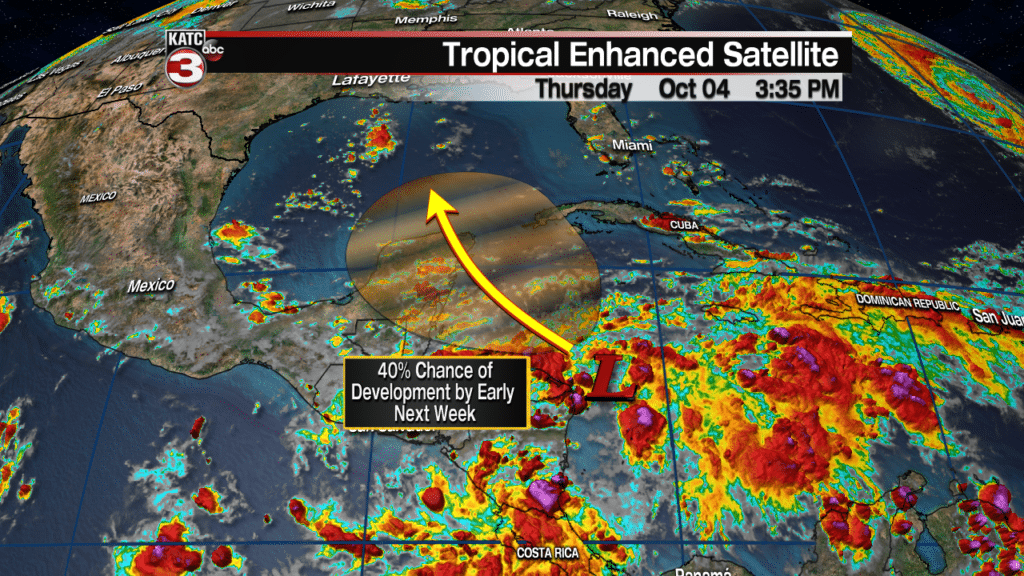 It is way too early to call on whether there will be an organized storm in the Gulf next week or not, and or where the system may ultimately go.

But for now, areas from Southeastern Louisiana to the Florida Panhandle should be watching for this potential system, and more than likely some rain impacts by Wednesday/Thursday of next week.

It does appear that deep tropical moisture, per the European Model, will be advancing through the Gulf early next week reaching the Northern Gulf Coast by Wednesday and/or Thursday. 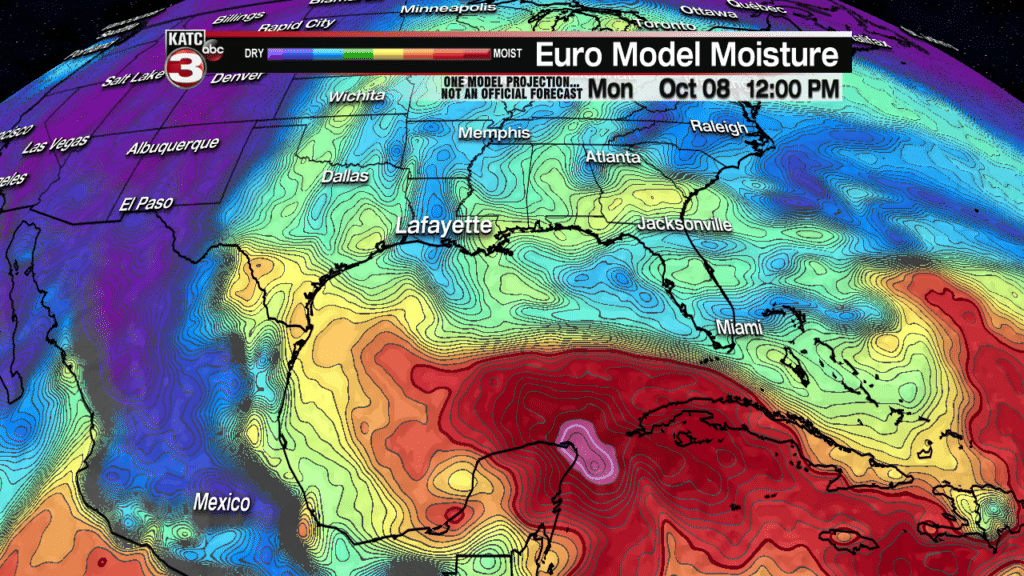 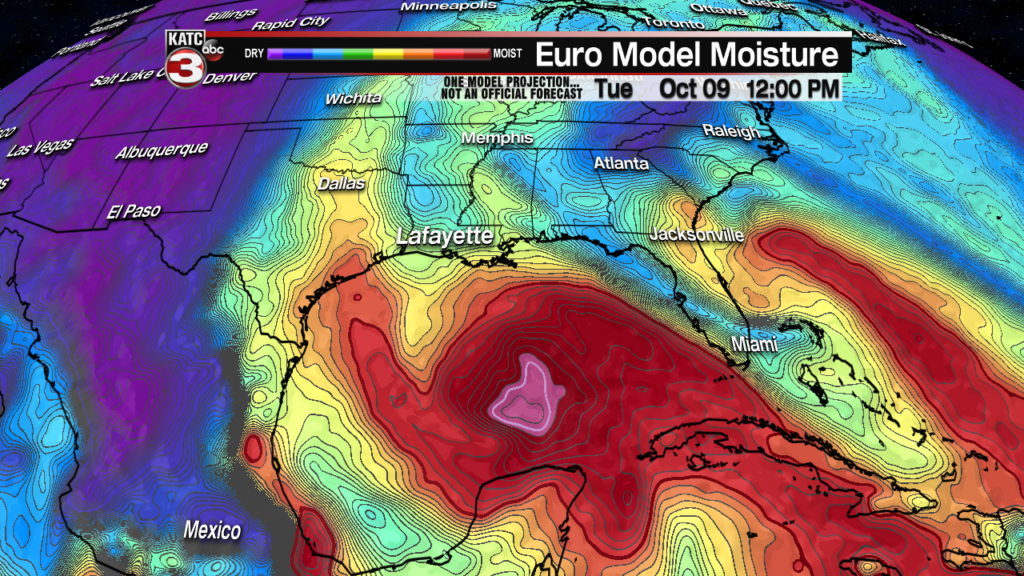 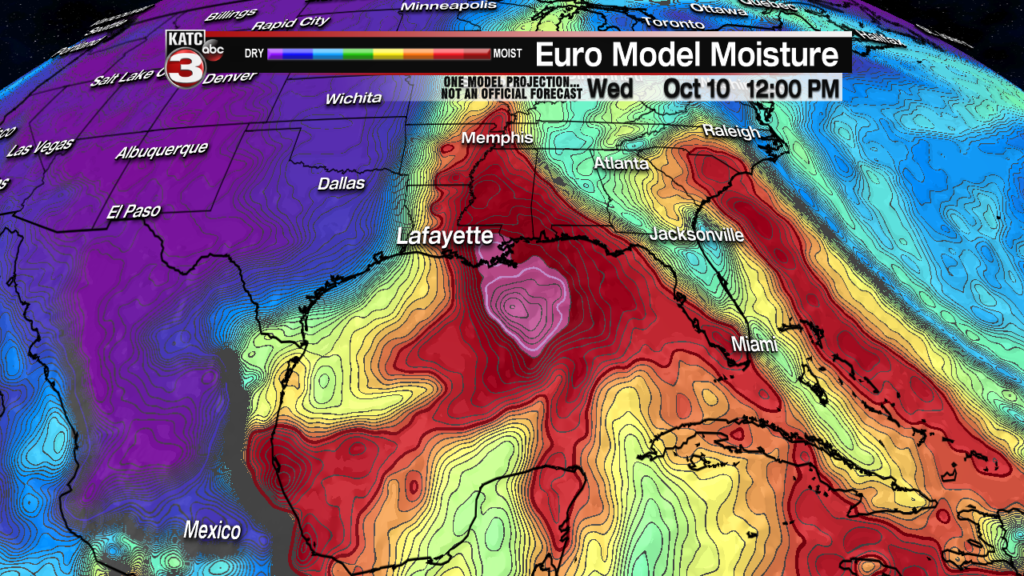 In case your interested, risk of hurricane development, per the European Model Thursday, was 10% or less.

The pattern across the U.S. next week will be changing with a fairly large trough in the west beginning to advance a little more eastward, which could open the door for any potential system to advance northward and then more northeastward…this is a preliminary scenario.

If the aforementioned were to be the case, there could be some rain impacts in the Acadiana area, but the deepest tropical moisture might go just east of the area…if that were to play out, the system could help to bring drier and slightly cooler conditions to Acadiana late in the week and into the following weekend…fingers crossed.

But if a ridge of high pressure over the Eastern U.S. is stronger than the models indicate, we could be involved with more tropical conditions, and be less optimistic about drier/cooler weather down the road.

The bottom line, stay tuned for updates on this system, as the way it will ultimately play out, is likely to change.

The next named system in the Atlantic Basin will be “Michael”.