While Acadiana will continue to experience a late summer weather pattern into the weekend, it is appearing that the tropics may come to life again in the Caribbean into next week.

In the near term, look for partly cloudy, hot and humid conditions along with a near 20% chance of a few widely scattered afternoon showers and/or thunderstorms.

Temperatures will top out near 90 with heat indices near 98-101.

Rain chances are anticipated to be a little higher Thursday (up to 30-40%), especially for the latter part of the afternoon as more moisture and instability make a brief come back.

Rain chances should drop back to near 20% Friday.

Additional moisture from the Gulf will move into the region for the weekend, allowing for more clouds and a few more showers and storms, especially western sections of Acadiana.

High temperatures through the weekend will likely stay in the upper 80s to near 90.

Meanwhile in the Atlantic Tropics, Tropical Storm Leslie continues to spin on the middle of the ocean with 65 mph winds as of late Tuesday afternoon.

Leslie is expected to briefly become a hurricane but is not anticipated to directly impact land other than producing swells and rip currents for portions of the East Coast, Bahamas and the Caribbean over the next several days. 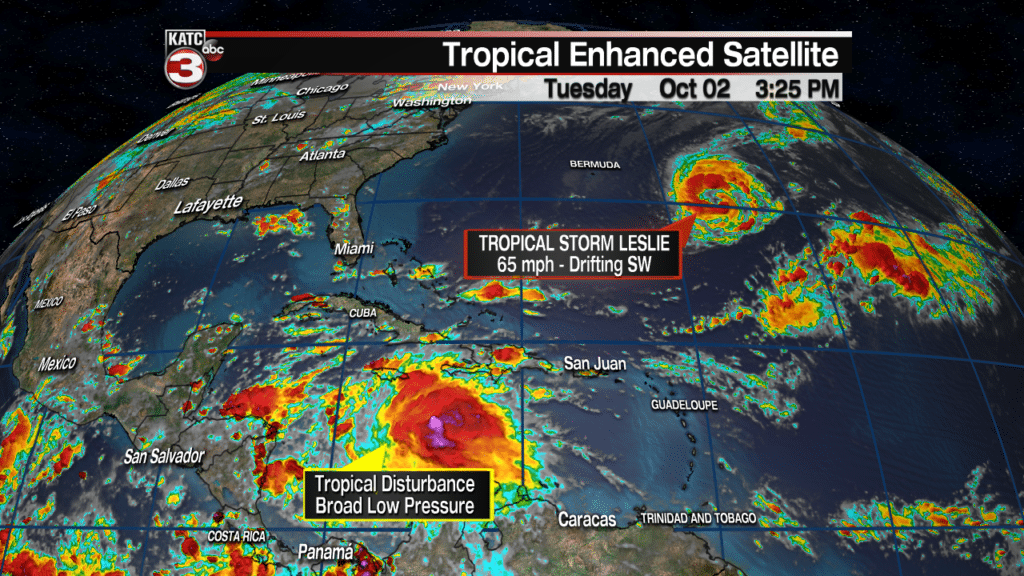 Farther south in the Caribbean Sea, it appears to be getting more “interesting” with a disturbance (parts of the former storm named Kirk) continue to fester.

The National Hurricane Center (NHC) is identifying that this system could become better organized with time toward the West or Northwestern Caribbean, with a 20% chance of development over the next 5 days. 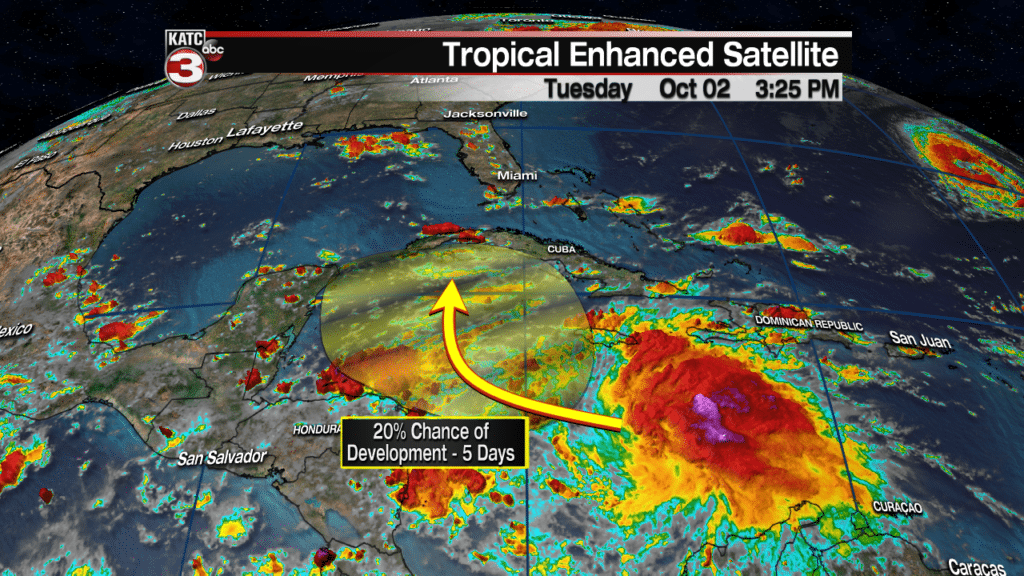 The GFS and European Models continue to hint at the possibility of a system (or two) developing in the vicinity of the Northwest Caribbean and toward the Yucatan late this weekend into next week. 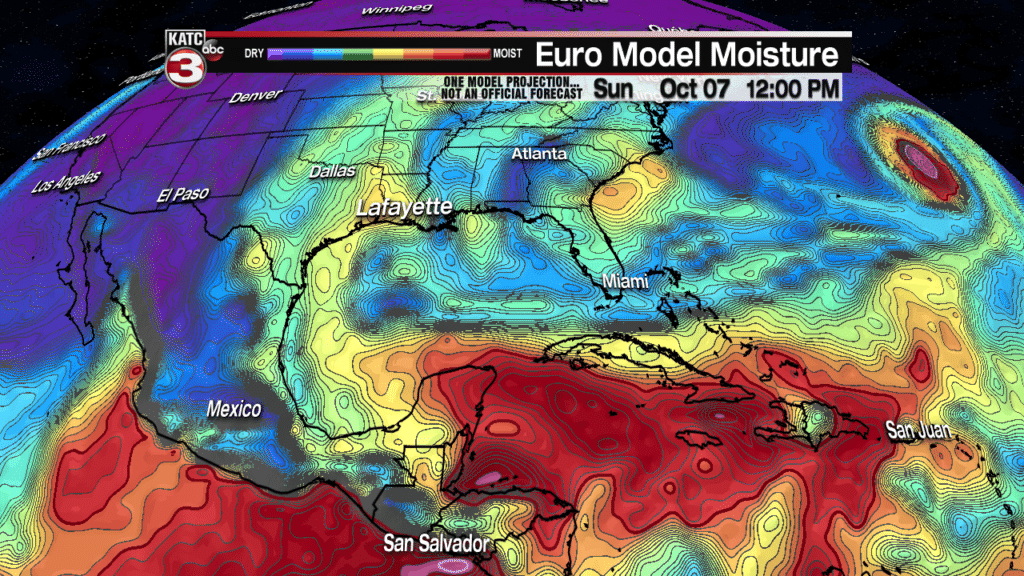 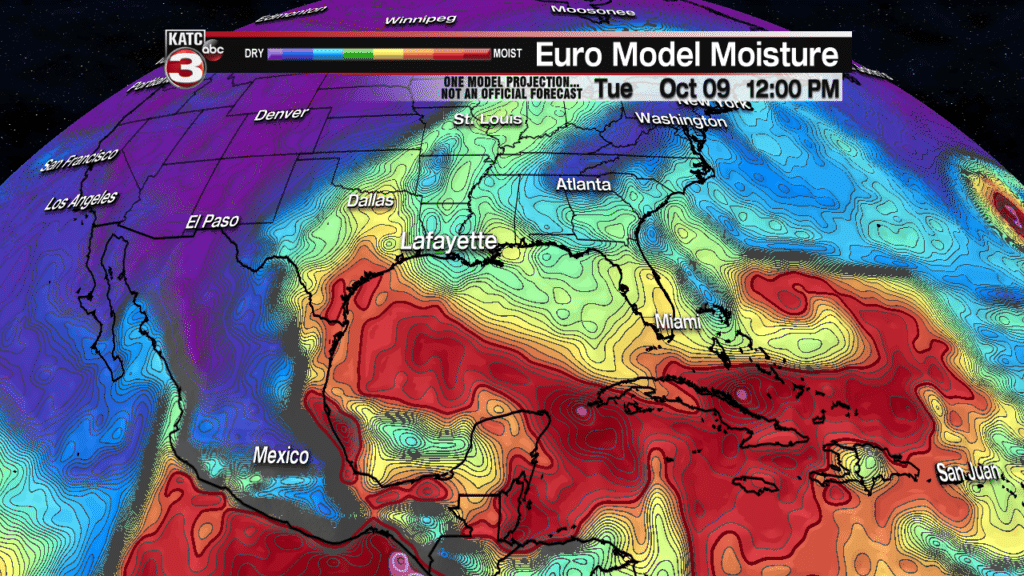 Both models show the deep tropical moisture with this area possibly splitting in two beyond this weekend, with one area moving northward toward Cuba/Florida and the Bahamas, and the other moisture blob heading for the Southern and perhaps, Western Gulf of Mexico. 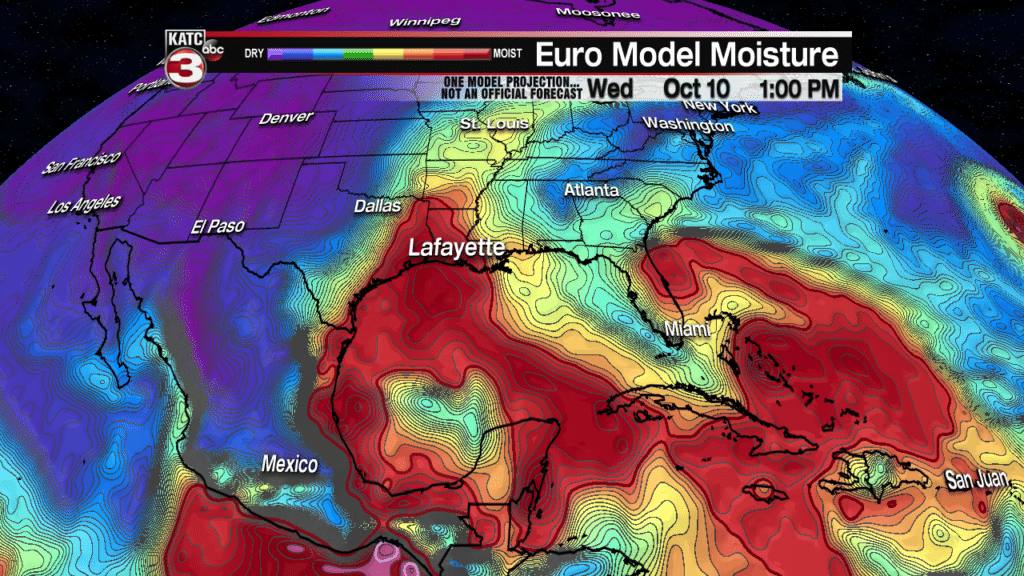 The GFS favors possible development in the Gulf, while the Euro is more keen on something developing farther to the east, but does point to deeper tropical moisture heading toward the Western Gulf, and our neighborhood toward the end of next week, which could result in higher rain chances at the very least.

So we may be tracking one or two systems well into next week, but forecast confidence in the 7-10 period is, as always, below normal…stay tuned..

For now, higher rain chances are reflected in our local 10 day Forecast due to the possibility of increased moisture in the Gulf, and for now, we’ll keep a more watchful eye on the tropics as the smaller, secondary peak of hurricane season is upon us. 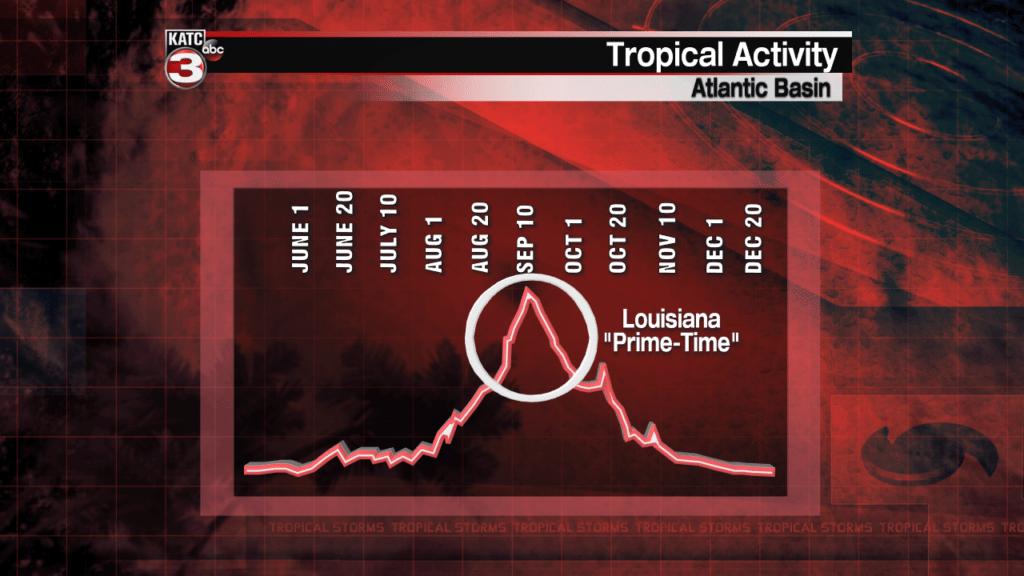 The secondary hurricane season peak usually coincides with increased activity in and near the Caribbean, so any activity in the aforementioned area would be par for the course.