Isaac has remained a weak category 1 hurricane today with sustained winds of 75 mph as it encounters some upper level wind shear. 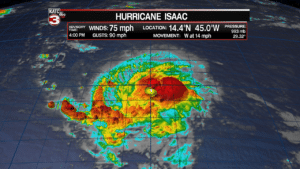 The latest track from the National Hurricane Center keeps Isaac on a westerly track across the Atlantic towards the Lesser Antilles.

Over the next couple days the hurricane center is projecting that Isaac will strengthen slightly but remain just a category 1 hurricane with winds topping out near 85 mph Wednesday afternoon. 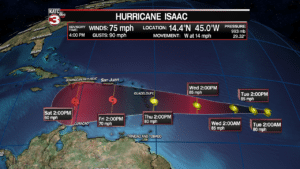 Thursday afternoon Isaac could make landfall somewhere near the island of Dominica as a weak hurricane and then weaken to a tropical storm as it moves into the Caribbean Sea this weekend.

That said there is still a lot of uncertainty as far as the potential track and intensity of Isaac in the coming days.

Looking at the spaghetti plots reveals that some models have it trying to turn to the North away from the Lesser Antilles. 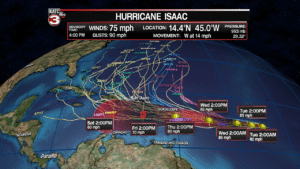 Other models have it getting closer to the islands before making the turn to the northwest while others have it staying on the westerly track into the Caribbean, which is the forecast the hurricane center is staying with right now.

For Acadiana we will have to monitor Isaac closely because if it gets into the Caribbean and holds together it could eventually make its way into the Gulf of Mexico.

Stay with KATC for the latest on this storm and the other hurricanes in the Atlantic.