Chances up to 50% for possible development in Gulf

With the 1pm update the National Hurricane Center is now giving the tropical wave in the Caribbean Sea a 50% chance of become a tropical depression in the western Gulf later this week. 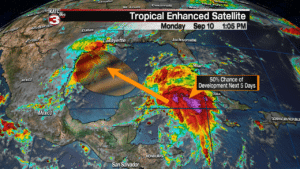 Currently a board area of showers and thunderstorms has formed along a surface trough and is moving through the western Caribbean sending heavy rains across Cuba.

The main area of possible circulation with this system would be on the southern side of the rain near the Yucatan Peninsula.

Right now the the showers and storms are fighting some upper level wind shear on the western side near the Gulf limiting development in the short term as it only has a 30% chance of becoming something in the next 48 hours.

If the wave is able to survive the shear and make it into the southern Gulf that is when further development might be possible as it will move over warm waters and the upper level winds are forecast to lessen.

The good news is the European model keeps this system to our south has has it tracking more towards the lower Texas Coast around Friday where it could possibility become a tropical depression.

We will be monitoring this wave closely and will give further updates as needed so stay tuned to KATC for the latest.