Slow moving cool front continues to inch its way across Acadiana this afternoon producing hit or miss showers and storms.

On and off rain will linger this evening as the front drifts over the region but activity should fade later tonight as the rain loses it’s daytime heating.

Monday the front will change over to a stationary boundary across central Louisiana creating another day with scattered showers and storms during the afternoon. 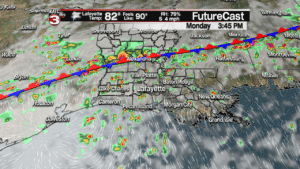 By Tuesday that front will dissipate but a new low pressure and associated cool front will move out of SE Texas and slide near Acadiana bringing with it more rounds of showers and storms throughout the day. 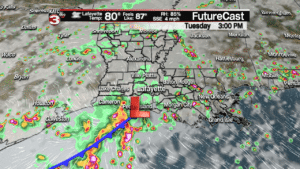 With all this rain I am not expecting any major flooding issues but many locations will receive another 1-2 inches of rain the next couple days, while areas along the coast could pick up higher amounts, leading to some ponding on roadways and minor flooding in the typical low lying spots. 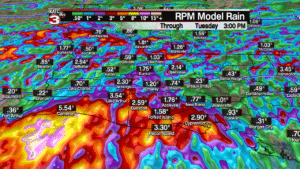 Wednesday we could still have some hit or miss showers and storms during the afternoon as there will be plenty of moisture in the atmosphere from all the rain we will get to start the week.

For the end of the work week rain chances will go down to about 30-40% for a few isolated pop-up showers and storms during the afternoon but we should have more sunshine heating highs back to near 90.

The summer-like pattern looks to continue for next weekend with hot temperatures in the lower 90s and a 30% for a few showers to fire up each afternoon but for the most part we will dodge the rain with partly sunny skies.

In the tropics the National Hurricane Center is now watching a board tropical wave in the Caribbean Sea. 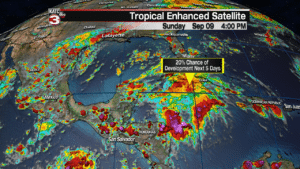 The center is only giving this wave a 20% chance of development as it moves into the Gulf of Mexico and most models don’t show this wave becoming anything but it could send more tropical moisture towards Acadiana to fuel the showers and storms for the first half of the work week.

Out in the Atlantic Florence and Helene have both strengthened to become hurricanes while Isaac is right on the verge of becoming a hurricane as well.

This afternoon Hurricane Hunters flew into Florence and found that the pressure is falling and the system is starting to begin its possible rapid intensification. 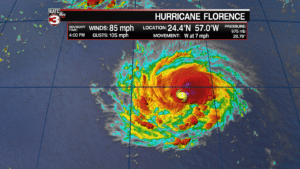 The latest track has Florence topping out as a category 4 hurricane with 140 mph winds Tuesday and Wednesday afternoon as it quickly races for the Carolina coast. 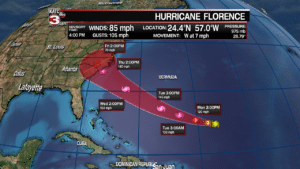 Models are coming into agreement that landfall looks likely somewhere along the Carolina coast as a major hurricane something Thursday afternoon/evening.

Those that live longer the coast should monitor Florence closely as hurricane watches could be issued as early as Tuesday.

After making landfall there are some questions as to what Florence will do next.

The European model has it moving further inland up into North Carolina and Virginia bringing heavy flooding inland while the GFS model as it riding up along the East Coast pushing the heavy rain threat for those more near the Outer Banks and Virginia Beach.

Also, this afternoon Helene has now become a hurricane, the 4th storm this season to reach hurricane status. 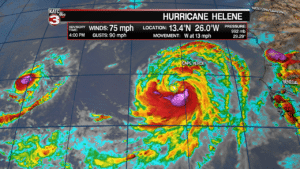 The northern portion of Helene is slamming the southern Cabo Verde Islands with gusty 50-60 mph winds and heavy rains but Helene should move away from the islands later tonight into Monday.

After clearing the islands Helene should then take a turn to the north and head for the open Atlantic. 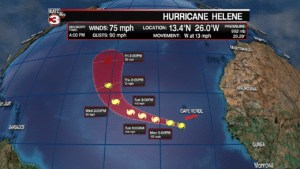 Finally, Tropical Storm Isaac is a tiny storm but its also getting better organized and could strengthen to a hurricane later tonight or Monday. 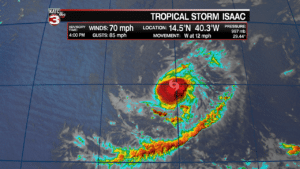 Isaac is forecast to track due west for the Lesser Antilles Islands and could make landfall near Dominica as a category 1 hurricane on Thursday. 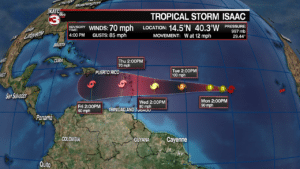 Once it crosses over into the Caribbean Sea Isaac is projected to weaken down to a tropical storm.

Most long range models have Isaac staying to the south and moving into Central America but we will have to watch this closely and make sure it does not make a turn to the north into the Gulf of Mexico.