Today will be very similar to Thursday with times of morning sunshine before clouds and scattered showers and thunderstorms develop throughout Acadiana this afternoon. 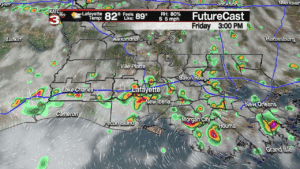 This moisture is still the tail end of what’s left from Tropical Depression Gordon moving through Arkansas which means there is lots of tropical moisture in the atmosphere so like yesterday some of these showers could produce rounds of heavy rain leading to ponding on roadways and in low lying areas but no major flooding issues are expected..

The good news is most of the showers should begin fading this evening just in time for the start of high school football but with the rain gone it is still going to be very warm and muggy. 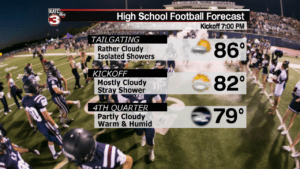 This weekend a frontal boundary will begin to slowly drop down towards Acadiana creating more instability to fire up more afternoon showers and storms Saturday and Sunday afternoons. 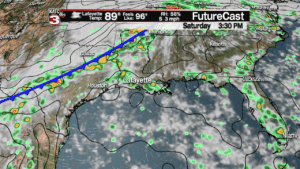 The front will be a little closer on Sunday meaning rain chances will be slightly higher on Sunday compared to Sunday and we should have more clouds around on Sunday holding temperatures a few degrees cooler in the mid 80s but it is still going to be very sticky and uncomfortable. 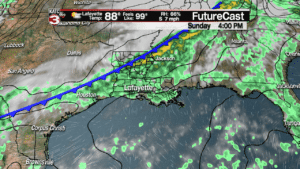 Then going into the new work week the front will try to slide over top Louisiana keeping rain chances on the high side near 60% on Monday and Tuesday so you are just going to want to keep the rain gear handy the next several days.

Rain chances could go down slightly for the second half of next week but models keep us in a very humid summer like pattern which means there will continue to be a decent opportunity for afternoon showers and storms to fire up throughout Acadiana.

In the Atlantic Florence has continued to weaken down to a tropical storm with sustained winds of 65 mph as it is encountering lots of wind shear. 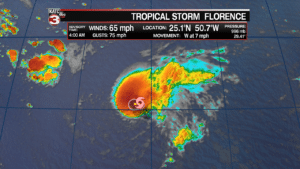 However, this weekend the shear is expected to lessen allowing Florence to restrengthen back to a hurricane by Saturday afternoon.

The latest track from the National Hurricane Center has Florence strengthening back to a category 3 major hurricane early next week as is slides to the South of Bermuda. 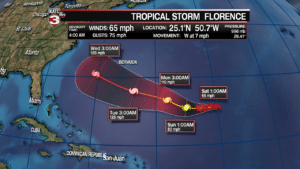 Beyond 5 days the models really spread out so there are a lot of uncertainties as to whether Florence will head for the east coast or turn to the north and stay out to sea.

Areas from the Carolina coast up to New England will have to watch this storm closely in the coming days to see where Florence eventually ends up going. 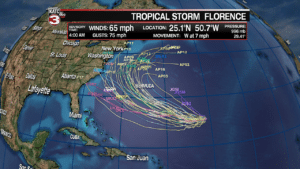 Also, in the tropics the center is monitoring 2 tropical waves off the west coast of Africa.

Both of these waves now have a 90% chance of development in the next 48 hours so it is a race to see which storm will form first and get the name Helene while the other will then get the name Issac. 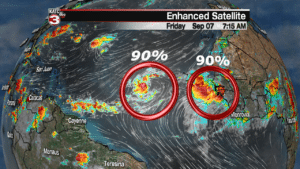