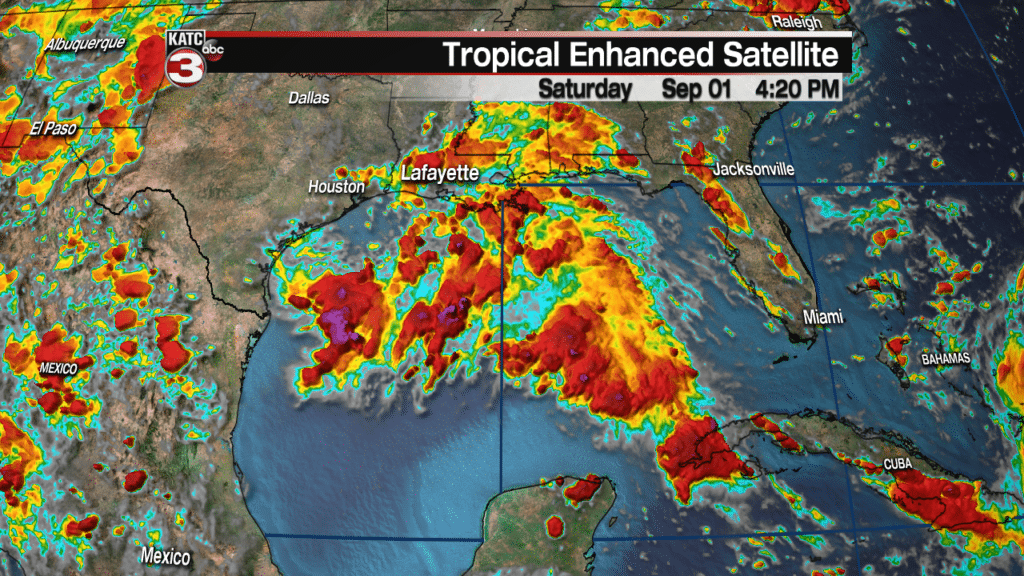 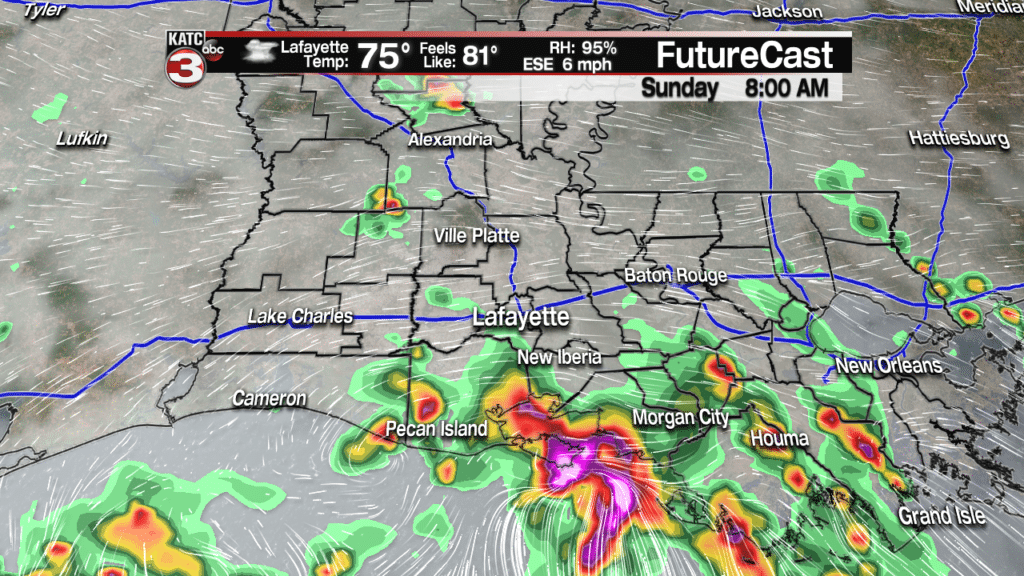 These showers and storms will wrap around the trough Sunday afternoon sending rounds of rain across Acadiana moving from east to west. 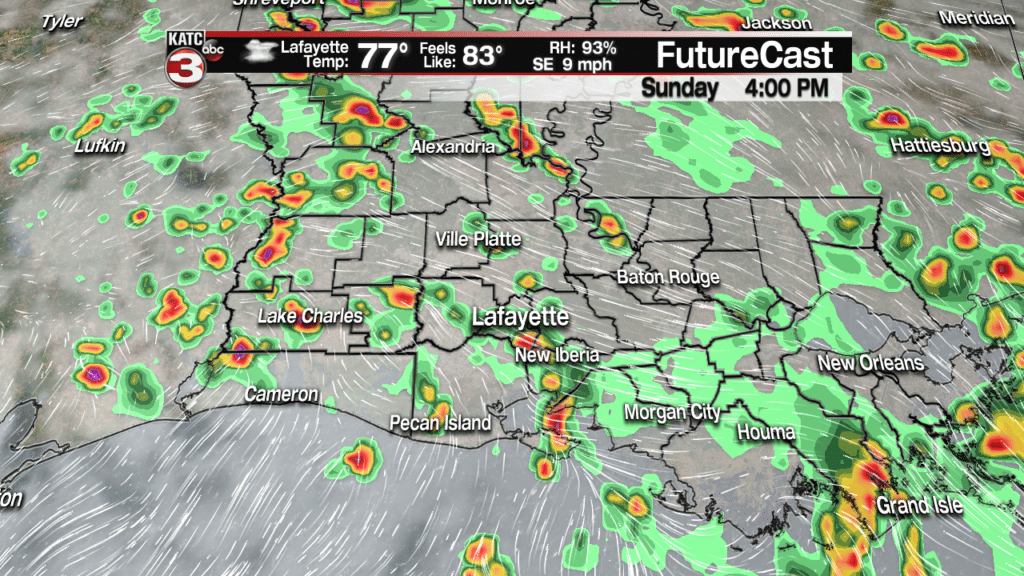 This trough in the Gulf will not move much over the next 36-48 hours so scattered showers and storms will be with us on Labor Day as well. 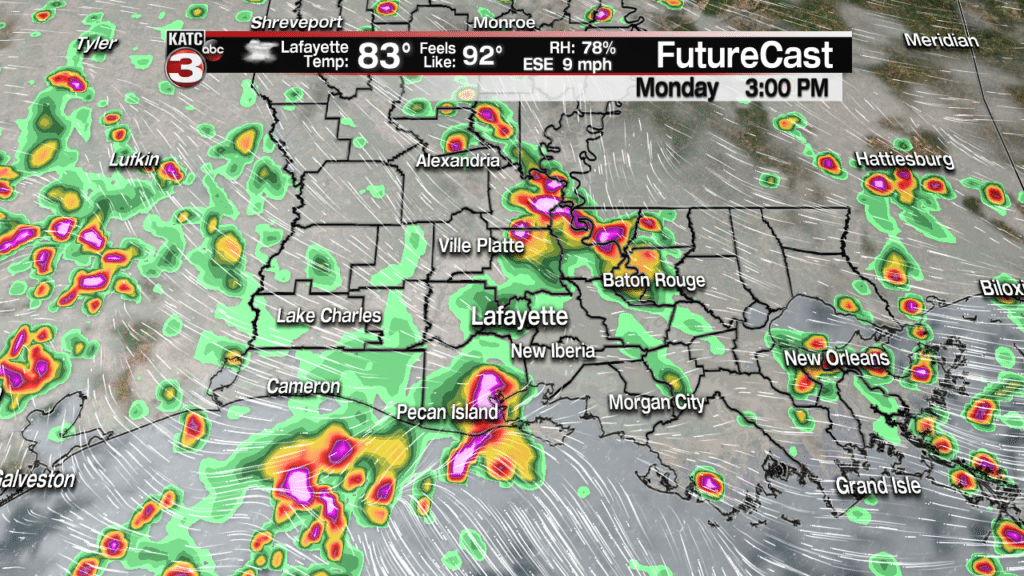 I am not expecting any severe weather but some of these showers/storms could produce periods of heavy rains, lots of lightning and gusty winds up to 30-40 mph.

As for rainfall the next couple days most of us we pick up between 1-2 inches of rain but areas along the coast could see higher amounts in the 2-5 inch range. 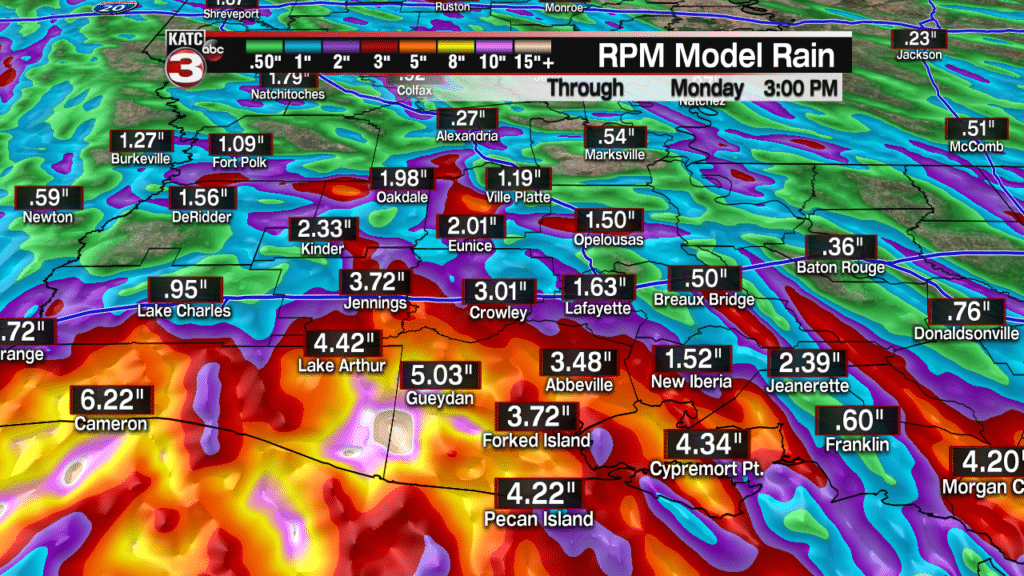 Widespread flooding does not look to be an issue but areas that get these heavier showers/storms could see minor flooding in the typical spots and ponding on roadways.

Tuesday we might get a break in the rain to help Acadiana dry out some but I will not rule out a couple pop-up showers and storms during the afternoon.

Then as we move into Wednesday and Thursday widespread showers and storms will return with as we will have a potential tropical system developing in the Gulf.

Speaking of that possible tropical system here is what we know now.

The tropical wave is located near southeastern Cuba and is beginning to show a bit more activity today in terms of deep convective showers and thunderstorms but it is still encountering unfavorable conditions. 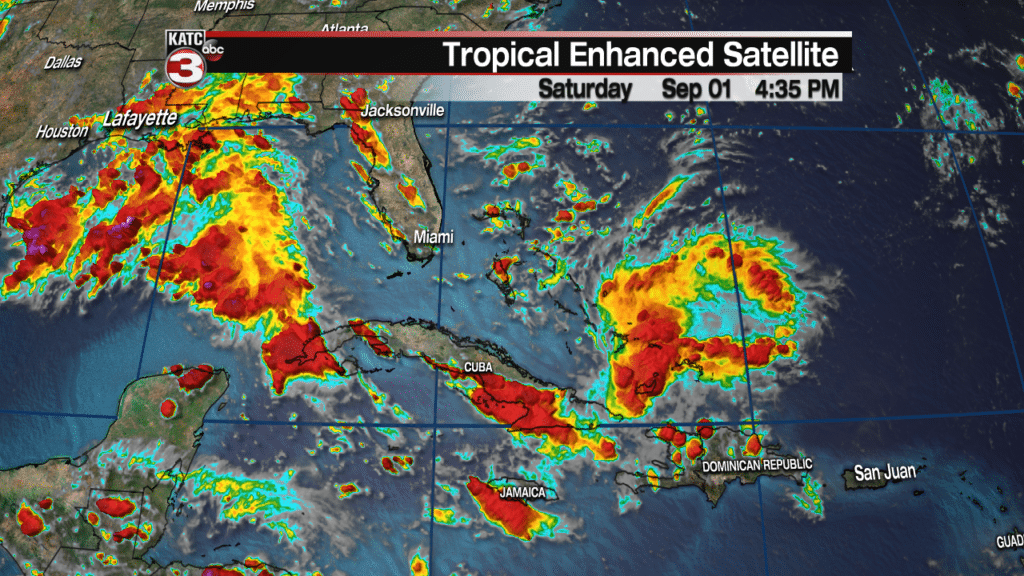 In the coming days, the wave will gradually track WNW between the Bahamas and Cuba as it heads for South Florida by Monday afternoon producing rounds of heavy showers and storms for the Miami area.

Once the wave moves out into the eastern Gulf of Mexico it could begin to start getting organized as it will be in a more favorable environment.

Models are still inconsistent on what happens once it moves into the Gulf but the National Hurricane Center has increased the waves chances of development up to 50% in the next 5 days. 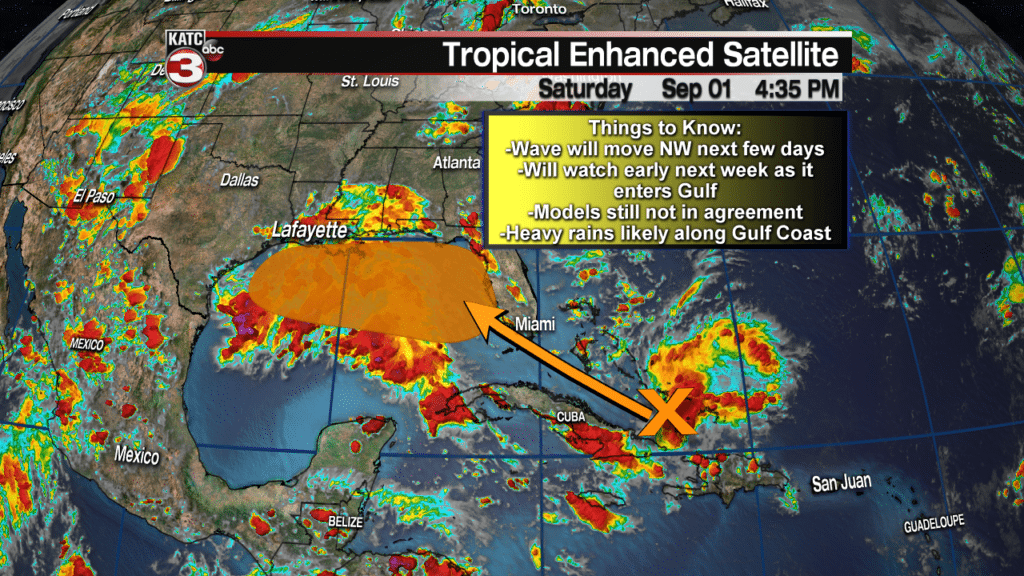 The European model continues to be the most aggressive with the wave potentially strengthening to a tropical storm and making landfall near the mouth of the Mississippi River something early Wednesday morning. 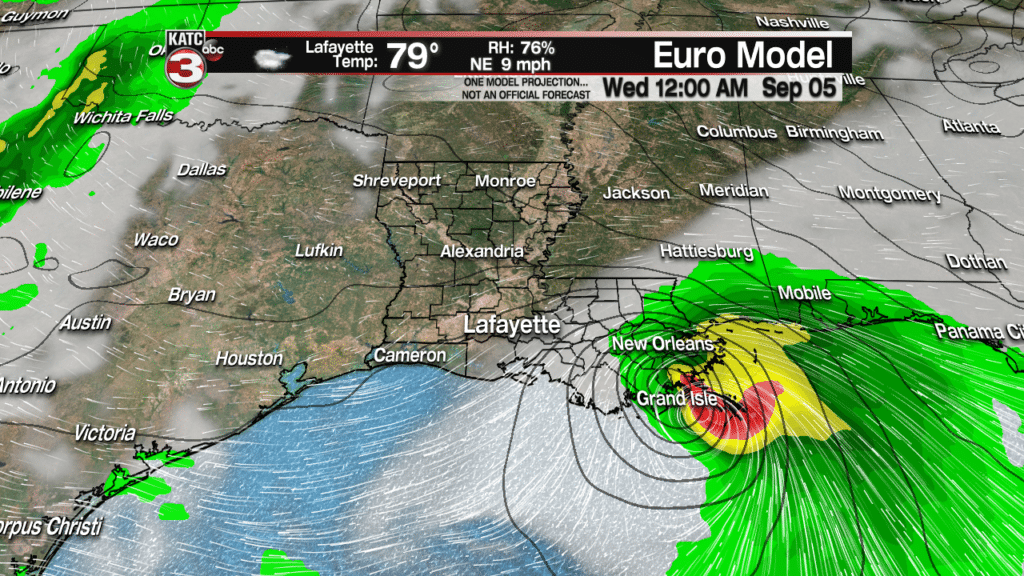 After making landfall the system will then track west across Acadiana bringing us widespread showers and storms Wednesday and Thursday. 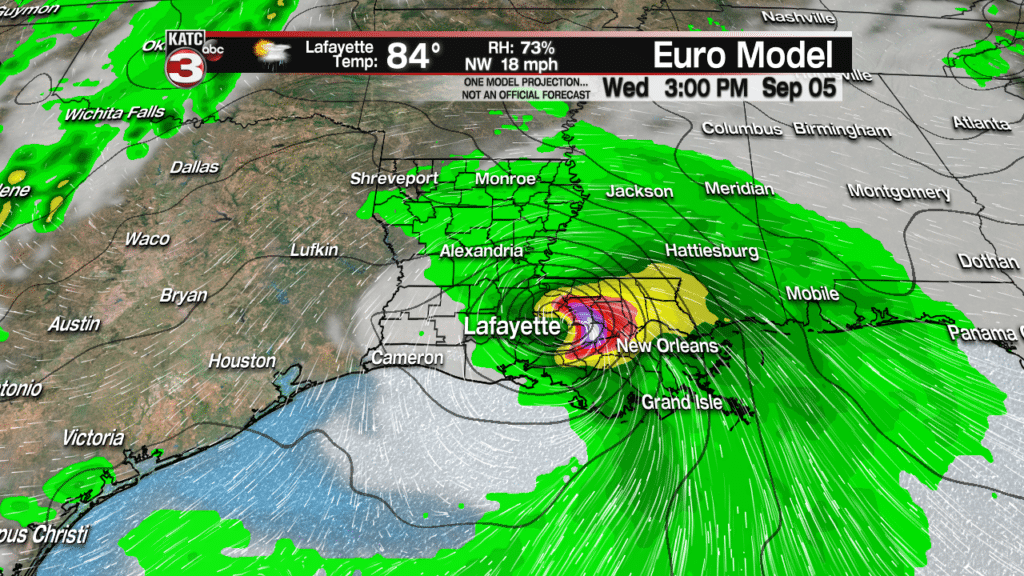 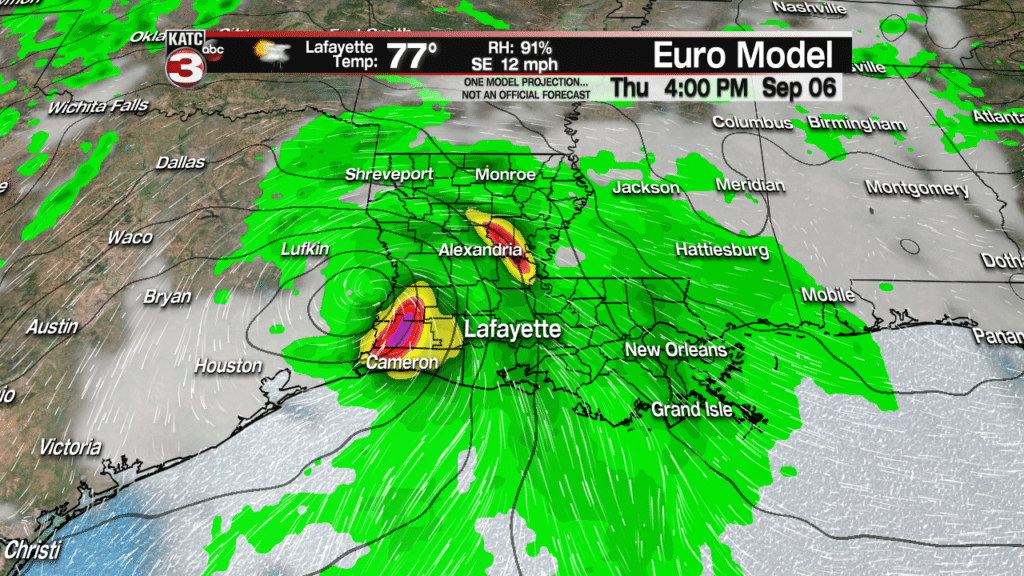 Now the RPM model only goes out to Tuesday afternoon but it shows more of a weak low or tropical depression developing just to the south of the Mississippi Coast. 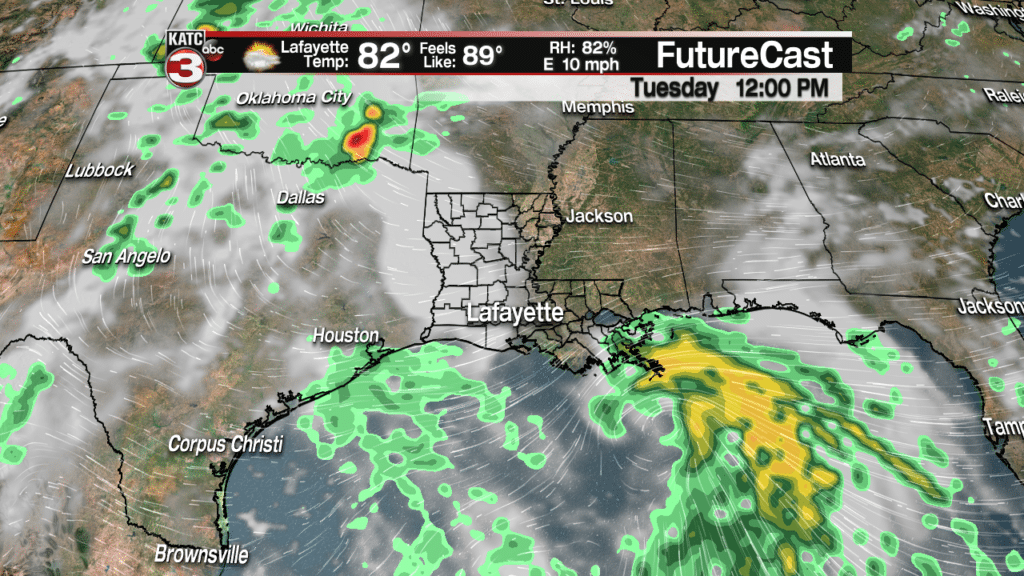 Finally, the GFS continues to be the less impressive with this system staying just a tropical wave and only bringing hit or miss showers and storms to Acadiana on Wednesday and Thursday. 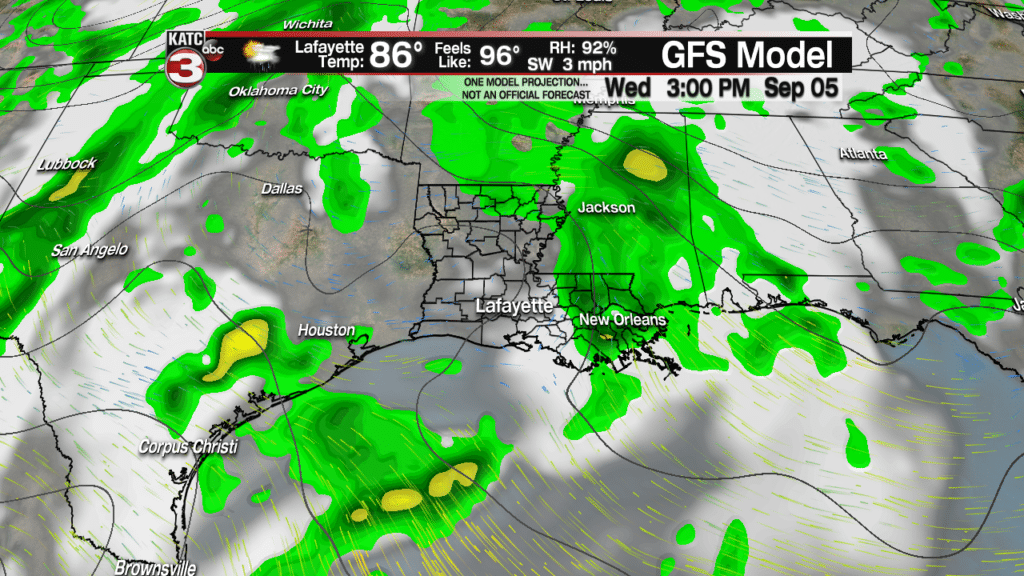 Thus, I believe we will see something in the middle which means maybe a tropical depression or weak tropical storm but either way we will probably have more rain heading our way for Wednesday and Thursday.

Also, in the Atlantic Tropical Storm Florence is becoming better organized with winds of 45 mph and gusts up to 60mph. 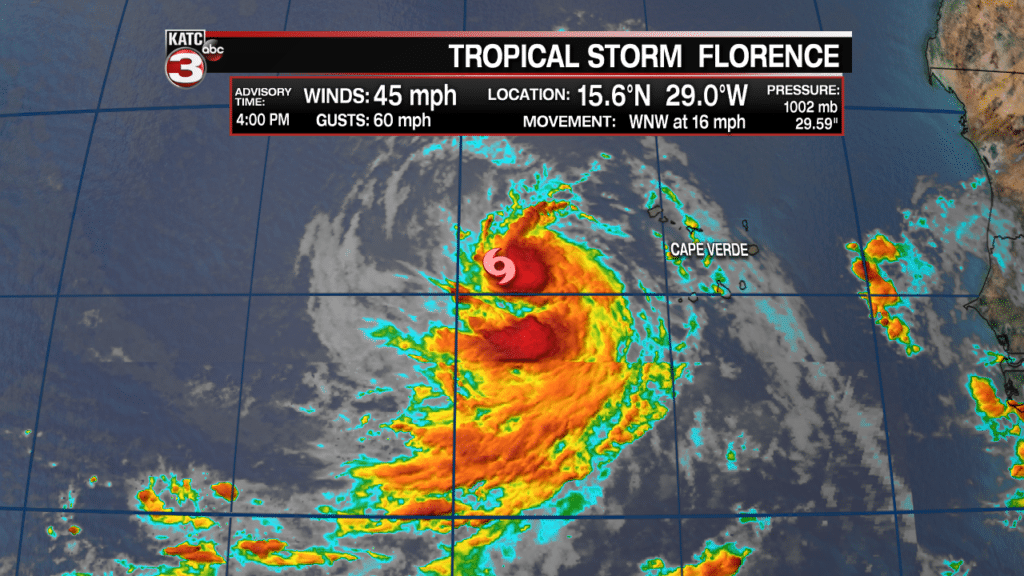 The good news is Florence will stay out over the central Atlantic Ocean away from land and remain just a tropical storm. 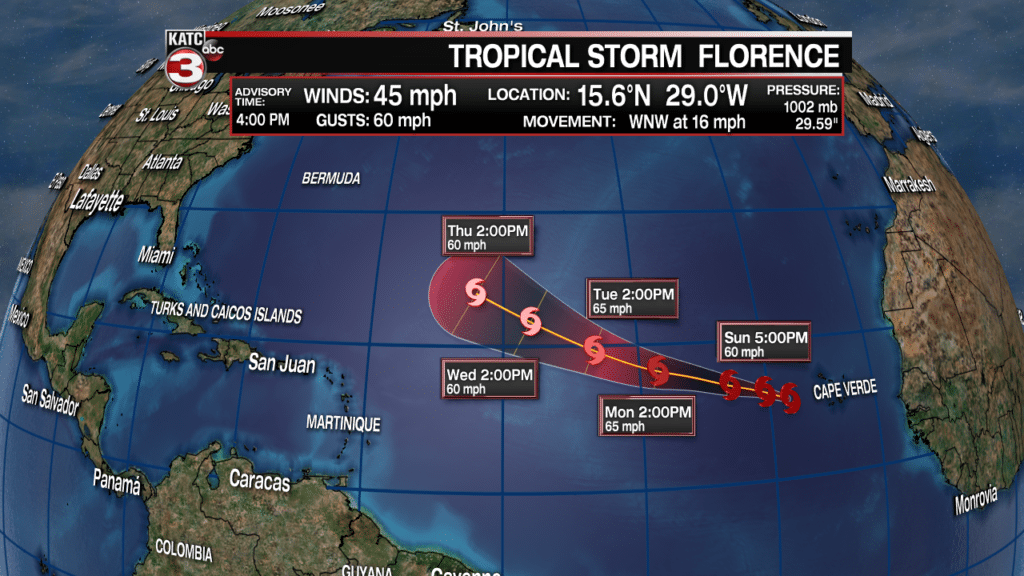