Hot & humid with pop-up showers & a look at the tropics

Following Wednesday evening’s showers we had plenty of moisture in the lower levels this morning to produce patchy to dense fog here in Lafayette to get our Thursday started.

This fog has burnt off leading to a hot and humid day with highs in the lower 90s and feel like temperatures pushing the triple digits under a mix of sun and clouds.

This heat and humidity will eventually lead to pop-up showers and storms this afternoon before fading this evening as we lose the heating of the day. 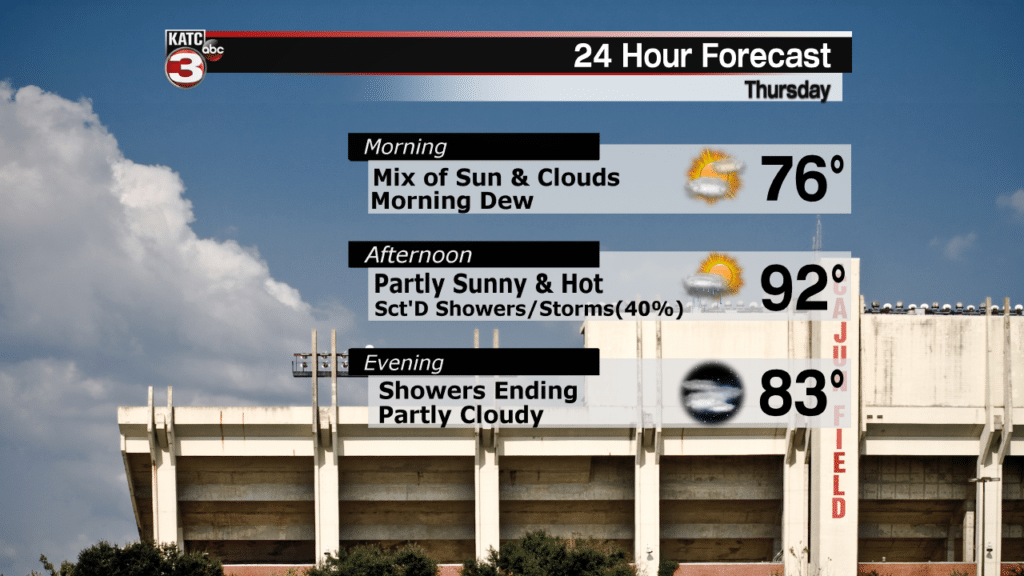 Friday looks to be very similar to today with hot and steamy conditions giving way to a 40% chance for hit or miss showers and storms during the afternoon.

A few showers and storms could linger into the evening potentially interrupting opening night for some high school football games throughout Acadiana.

For the holiday weekend the southeastern flow off the Gulf will pick up again increasing rain chances to 50-60% each afternoon, so outdoor parties or events could get a brief shower or storm for a little bit but no day will be a wash out.

As for the UL home opener against Grambling at 6PM on Saturday we will have a decent chance for a passing shower or storm for the tailgate and one or two showers could linger for the start of the game but hopefully if it is raining it should end during the first half of the game.

Unless you have lived under a rock for the past couple days you have probably heard that the tropics are finally starting to get active so here is my latest thinking on what is going on and what we can expect.

The first area of concern is a wave of tropical showers and thunderstorms near Puerto Rico. 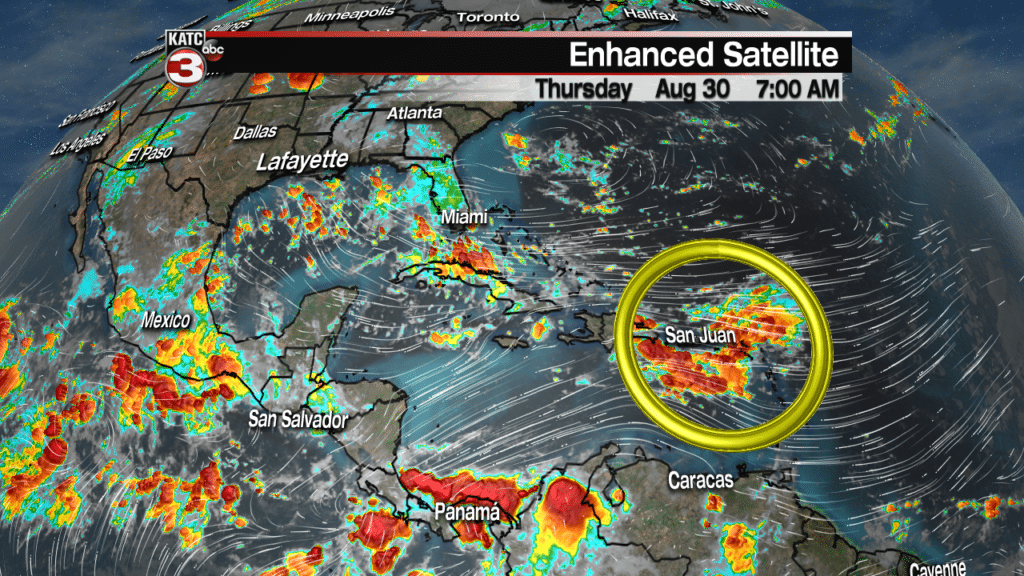 In the short term this wave will continue to be just that, a wave of showers and thunderstorms, as it is encountering a fair amount of wind shear preventing any further development.

Now this wave will slowly track off to the west north of the Dominican Republic, Haiti and Cuba as it heads for South Florida this weekend bring them widespread showers and storms for Labor Day.

On Tuesday the wave is projected to move out into the Gulf but that is where the models begin to diverge and disagree on what this system will do next.

The last several runs of the Euro model has been tracking the system towards the Alabama coast while showing signs that the system could become slightly better organized, possibility strengthening to a tropical depression or weak tropical storm as it moves over the warm Gulf of Mexico waters.

However, the GFS model has the wave tracking straight across the Gulf towards the Texas coast with very little strengthening.

Thus, there are still more questions than answers with this system and a lot can change in the coming days so no definitive things can be said about this system or what we could potentially see here in South Louisiana.

Myself and the rest of the KATC weather team will be keeping an eye on this disturbance in the coming days so check back often for the latest information and thinking on this system. 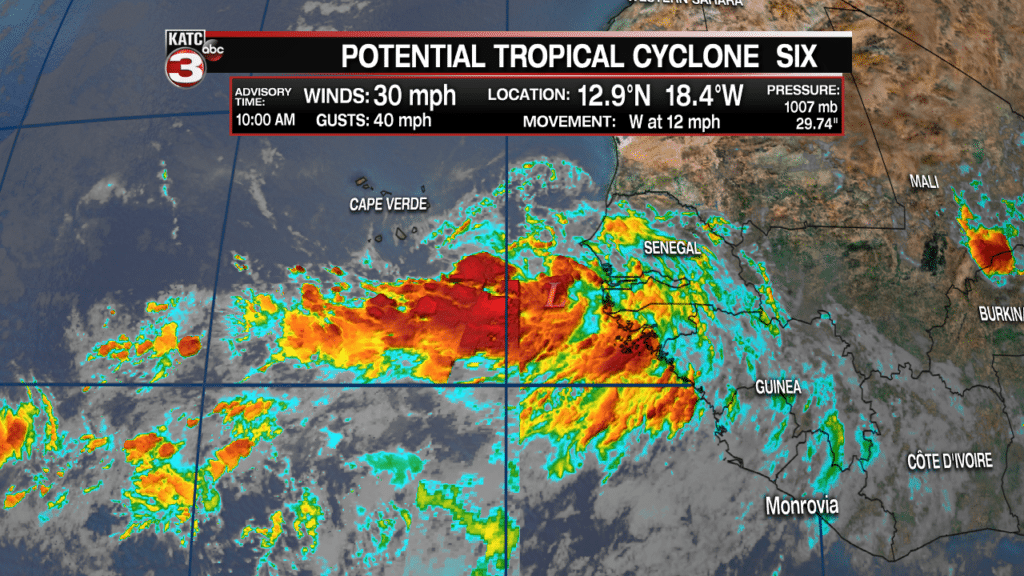 The system is a cluster of showers and thunderstorms near an area of low pressure but it does not have a well defined center or area of circulation.

As the system continues to encounter favorable conditions it is expected to strengthen and develop tropical characteristics later today or early Friday morning.

Although it is not tropical just yet Tropical Storm Warnings have been issued for the southern most Cabo Verde Islands of Santiago, Fogo, and Brava as this system will produce tropical storm like conditions on the Islands.

Once this system strengthens to a tropical storm it will become Florence.

Thankfully, this storm should turn to the north and stay out over the middle of the Atlantic and away from the United States. 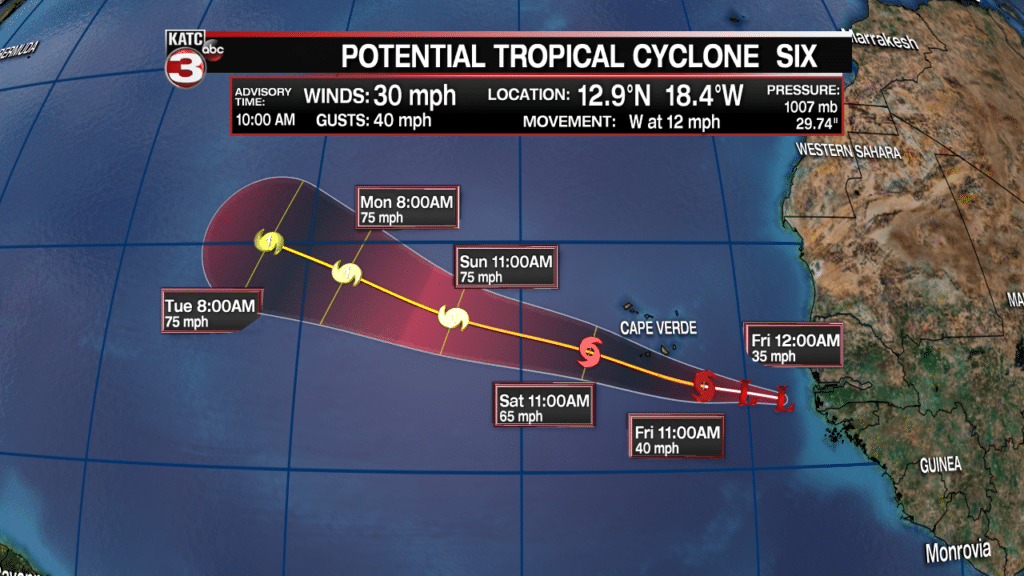