​We’re starting our work week with an unstable atmosphere that is rich with moisture. At the same time a weak cold front will be drifting into Louisiana late today and eventually sliding southward toward Acadiana Tuesday. This should set the stage for scattered showers and thunderstorms again this afternoon and evening. We’ll start the day with partly to mostly sunny skies. Some showers and storms will hold along the coast and into the offshore waters. Gradually the coastal storms will diminish, and with daytime heating, scattered storms will start developing over land. This may occur during the late morning hours, then gradually move inland as the day wears on. A few storms could produce locally heavy rain, with plenty of thunder and lightning accompanying them. 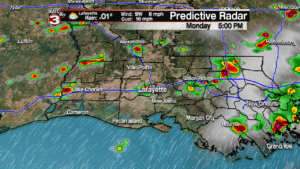 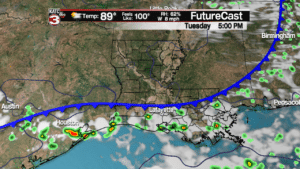 The cold front will enter northern Louisiana later this evening. As it extends toward Acadiana overnight into Tuesday, scattered storms may redevelop during the overnight period into Tuesday morning. Scattered storms will move along with the front during the day and the cold front should reach the coast by Tuesday evening. Although the front will be through, we can’t expect too much in the way of cooler weather this time of year. With that said, lower humidity could at least make it feel more comfortable during the middle part of the week. And with the drier air, less rain is expected Wednesday, and Thursday. By the weekend, the front will have washed out, and Gulf moisture will be returning. Therefore, expect hot and humid weather Friday through Sunday with afternoon storms returning.

A few tropical waves are noted over the Caribbean as well as the Atlantic Ocean, but no tropical weather is expected to develop over the next few days. Models aren’t really indicating anything active over the next week or so. The peak of the hurricane season is just three weeks away, so let’s hope things remain calm!