One more hot and humid day before rain arrives

July is starting off just like June with very hot and humid conditions and that will continue on Monday with highs in the low to mid 90s and feel like temperatures topping out between 101-104°. 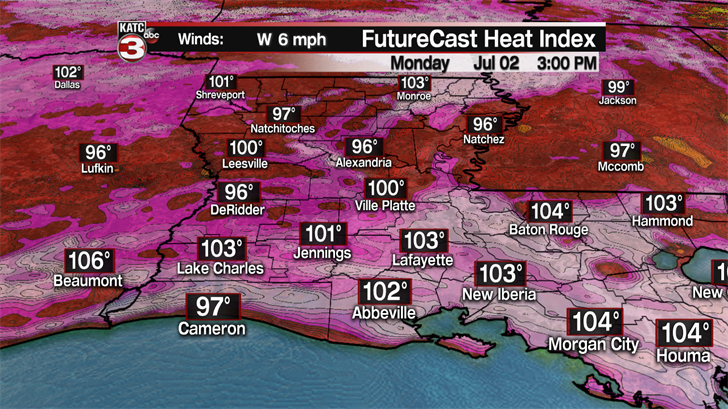 By Monday afternoon clouds will begin to thicken up across Acadiana as the tropical low by the Florida panhandle slowly starts sliding to the west towards South Louisiana leading to a few isolated showers and storms swinging into the eastern half of Acadiana Monday evening. 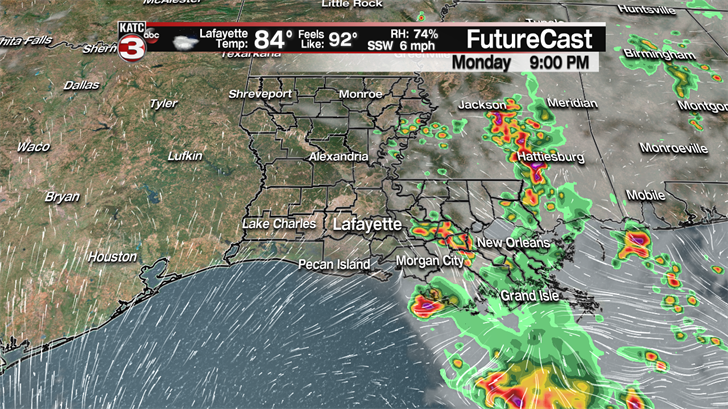 The tropical low will move right over top Acadiana on Tuesday producing widespread showers and storms, some of which could be on the heavy side with lots of lightning and gusty winds up to about 30-40 mph. 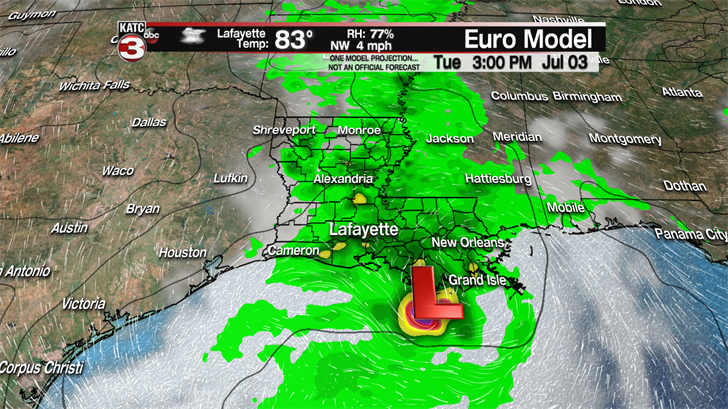 These showers and storms could interfere with some of the fireworks displays Tuesday evening but we could maybe luck out and the rain will die out in time and push off to the west that they will still be able to go off as scheduled.

Moving into the 4th of July the low will push off into east Texas taking the majority of the rain with it but during the afternoon with the heating of the day we will still have a 50% chance for scattered showers and storms to fire up across Acadiana. 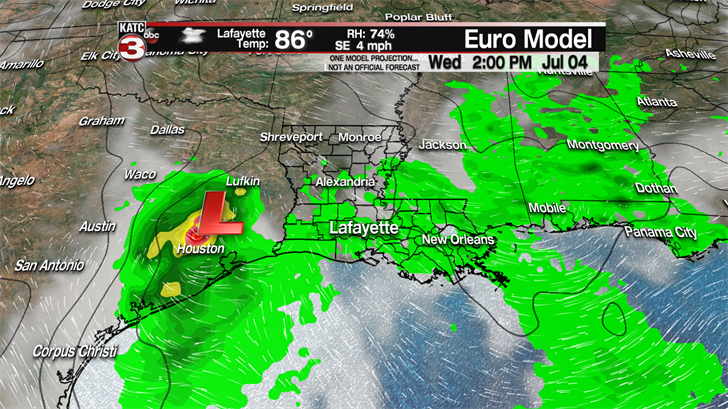 So, I am not expecting a wash out for any of your parties or holiday activities but you will just want to stay weather aware and if a shower or storms pops up near you make sure to have a place to seek shelter to get out of the rain for the 30-45 minutes that the shower or storm will last.

The good news is all these showers should fade out around sunset allowing all the fireworks on Wednesday night to have no issues.

Now, if you are heading out to watch the fireworks you will want to bring something to sit on besides the ground as it will be pretty wet as rainfall totals for Tuesday and Wednesday look to be between 1-3 inches, with a few isolated spots getting as much as 2-4 inches of rain. 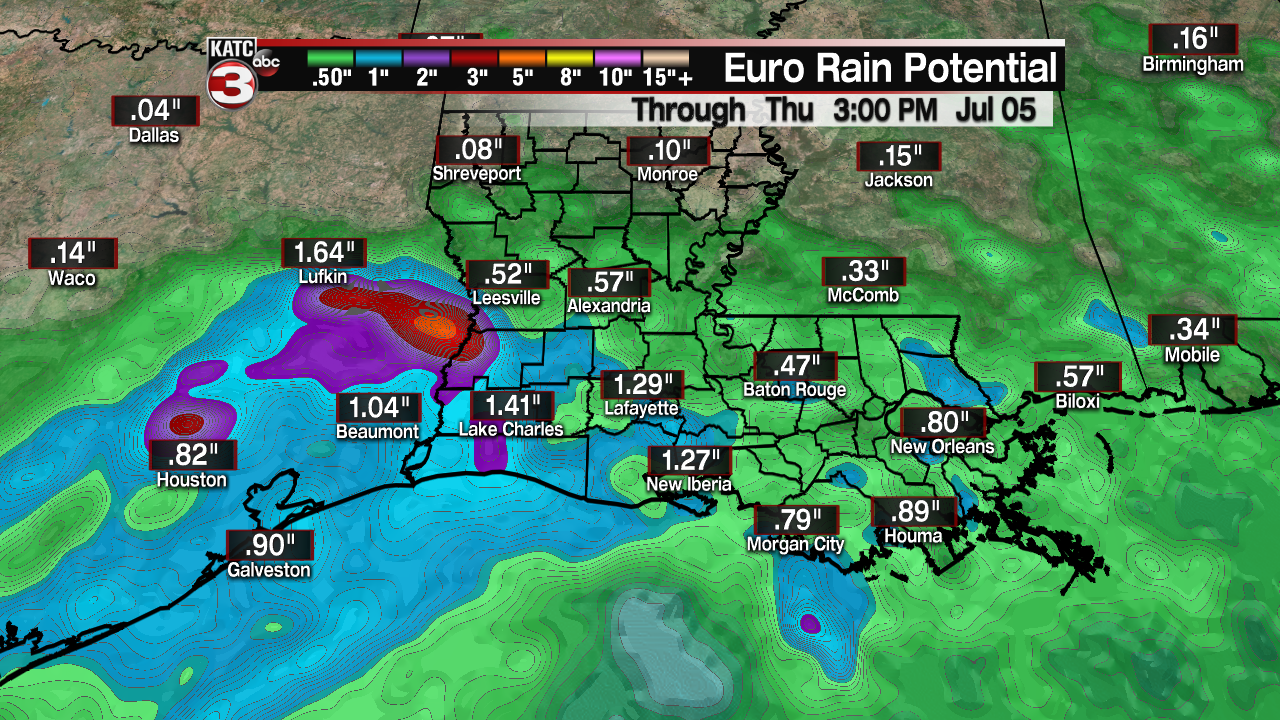 As you head back to work on Thursday the weather pattern looks to remain unsettled with an upper level shortwave heading our way keeping rain chances up near 50% during the afternoon.

And the wet pattern could continue with a 40-50% chance for scattered showers and storms during the afternoon on Friday and into the weekend.

With all the rain chances this week and the extra clouds that will help to keep temperatures a few degrees cooler with highs in the mid to upper 80s most days.

Checking in on the tropics it was a very quiet month of June in the Atlantic as there were 0 named storms, the first time since 2014 that has happened.

However, in the Eastern Pacific we now have Tropical Storm Fabio with sustained winds of 65 mph and gusts up to 75 mph.

Fabio is rapidly strengthening and should become a hurricane later tonight and winds could top 100 mph by Monday afternoon.

As Fabio moves over warmer waters and pushes into a favorable environment on Tuesday it is projected to become a major hurricane with winds topping out around 130 mph. 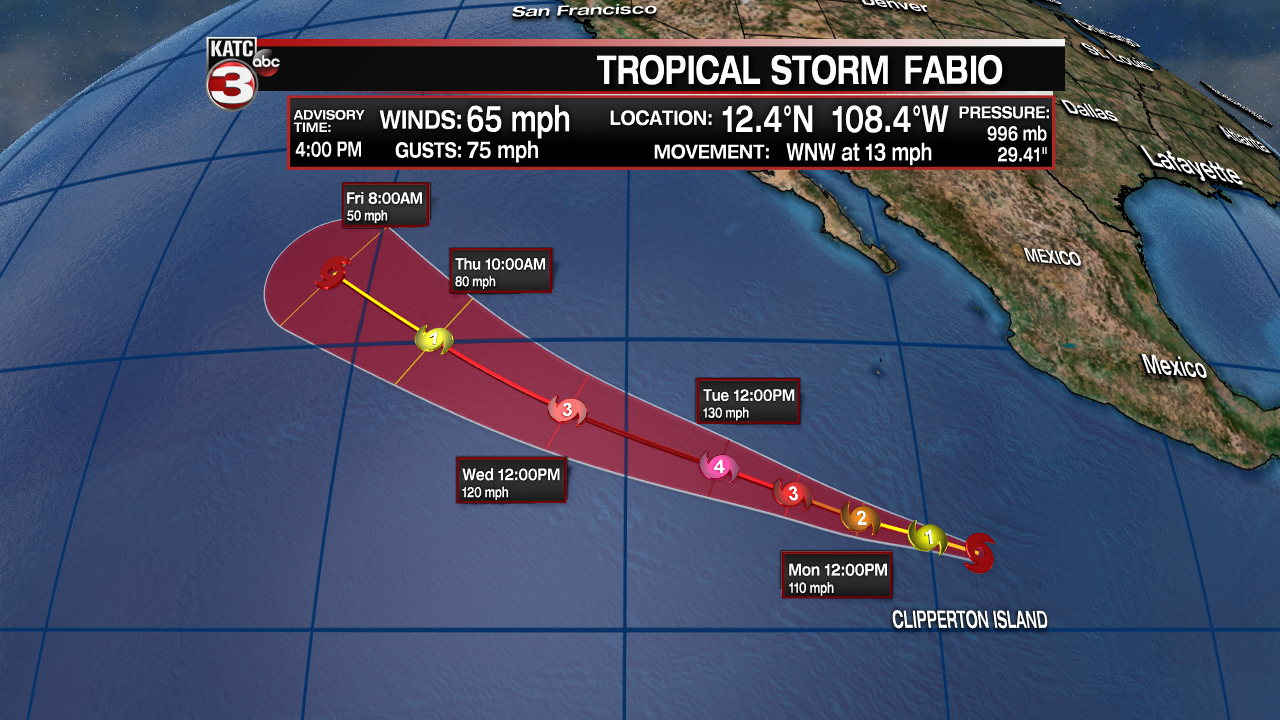 But as fast as it intensifies and will weaken just as quickly as it moves farther off to the WNW into deeper and cooler waters.