Have the rain gear handy Sunday as we will have about a 40-50% chance for scattered showers and storms beginning as early as 9-11am along the coast and working there way up to the I-10 corridor by lunchtime before pushing farther inland during the afternoon. 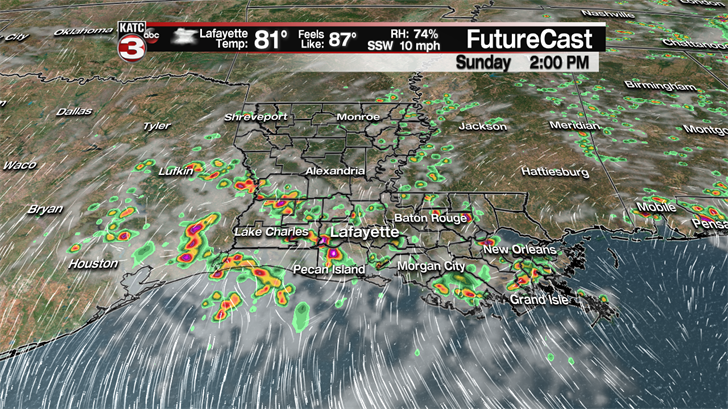 Rainfall amounts for most will be relatively light between a quarter to maybe a half inch as the showers shouldn’t last long but a few communities could see some heavy downpours which could add up to about 1-2 inches of rain but flooding should not be an issue. 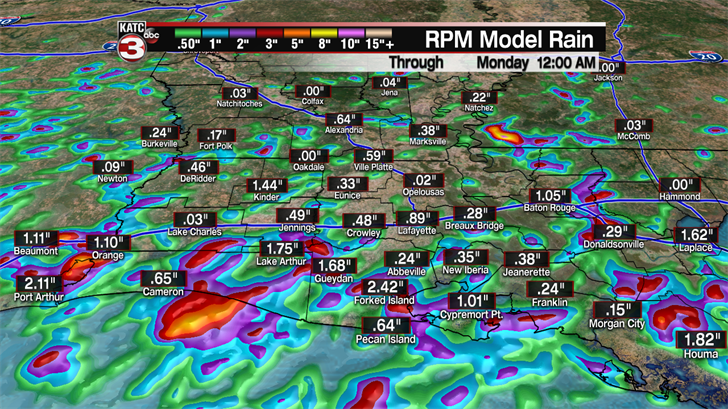 These showers are the result of a decent sea breeze off the Gulf mixed with the daytime heating to fire up these midday showers, similar to what we saw on Saturday.

Thanks to the clouds and chance for rain temperatures will be a few degrees cooler during the afternoon holding in the upper 80s, after topping out briefing in the lower 90s before the rain arrives.

For much of the upcoming work week we will be in a typical summertime pattern as our weather will be dominated by an upper level high in the eastern Gulf.

This high will create a persistent flow off the Gulf pushing daily moisture over Acadiana which will combine with the heating of the day to spark off hit or miss showers and storms each afternoon.

The chance that you will get one of these pop-up showers or storms on any given afternoon is about 20-40%.

Hopefully, your house/neighborhood can get a couple of these decent showers/storms as many areas need the rain as the short term drought situation is now up to moderate levels for portions of Acadiana. 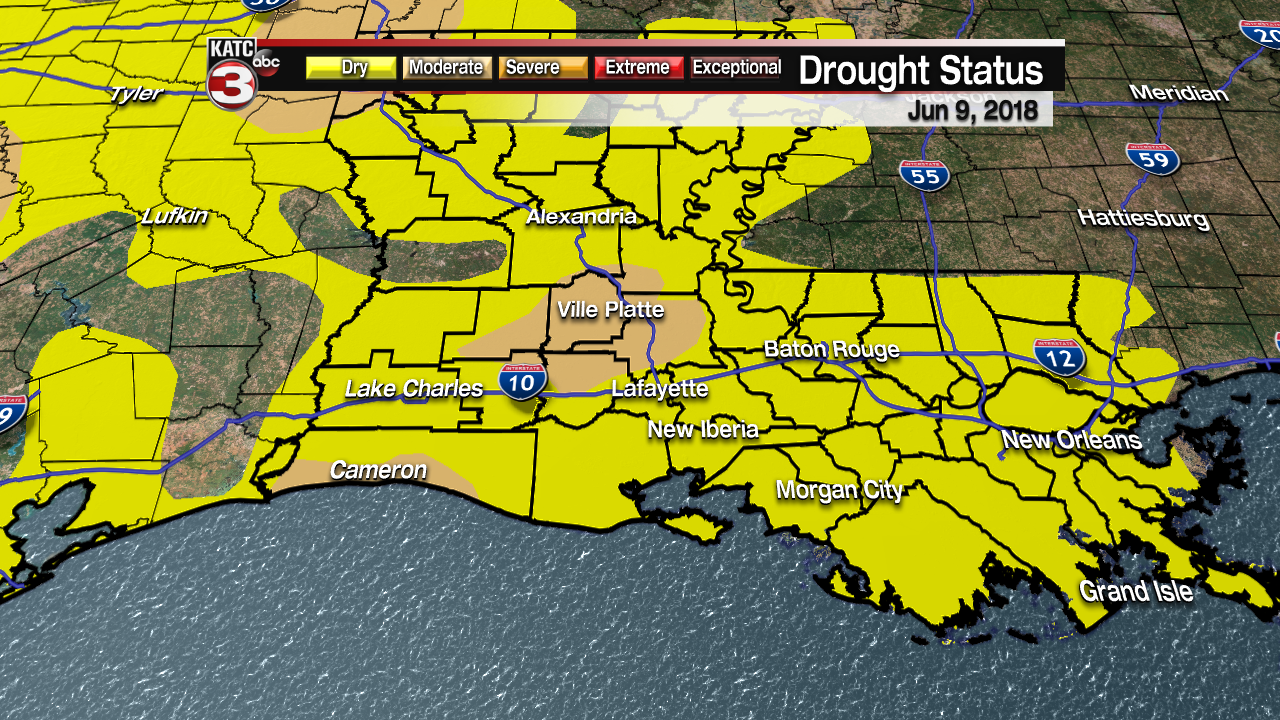 If you do get one of these pop-up afternoon showers the rain and clouds will also help to cool things off for a couple hours.

Otherwise, if you don’t get the rain and see more sunshine highs will warm into the lower 90s with heat indices pushing the upper 90s.

Looking ahead to Friday and next weekend that is when things get interesting.

The GFS model shows the possibility of a tropical systems maybe developing in the Gulf of Mexico as an area of moisture gets pushed along the outside of the upper high in the eastern Gulf.

The GFS shows this system possibility strengthening in the Gulf to maybe a tropical storm as it heads for the mouth of the Mississippi River Friday afternoon. 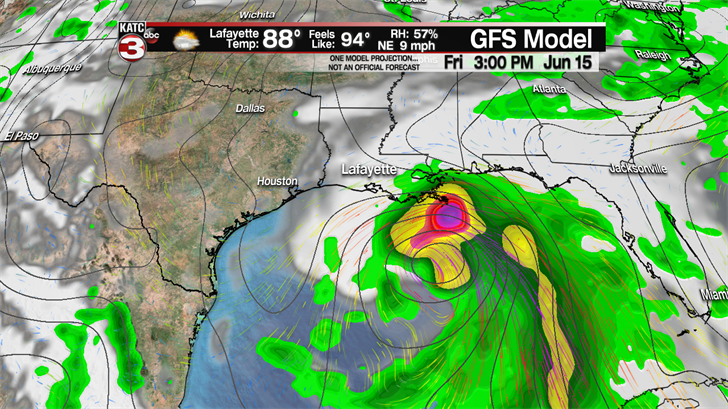 The latest GFS then shows the system riding along the Gulf Coast of Louisiana on Saturday as it works its way towards Houston where it comes onshore Sunday afternoon. 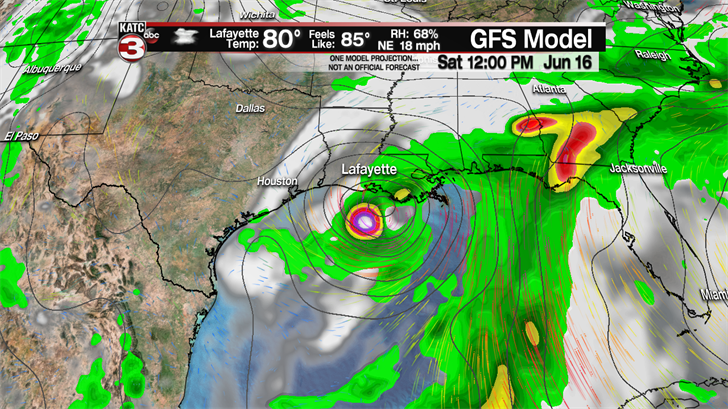 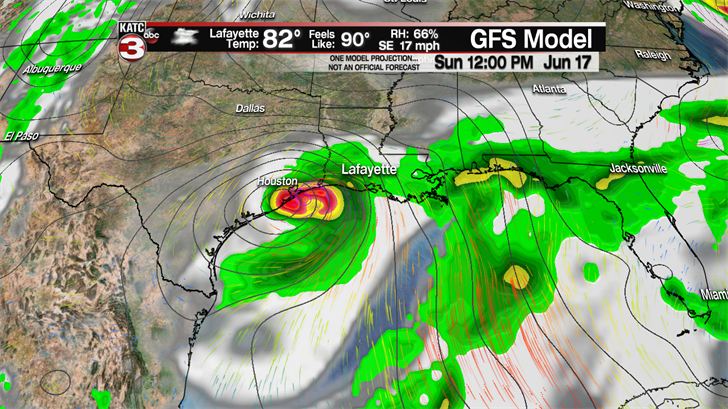 This is the more aggressive possible solution and would bring some heavy rains and gusty winds to Acadiana.

As for the European model it is also beginning to pick up on this tropic wave moving along the upper high and pushing out into the western Gulf. 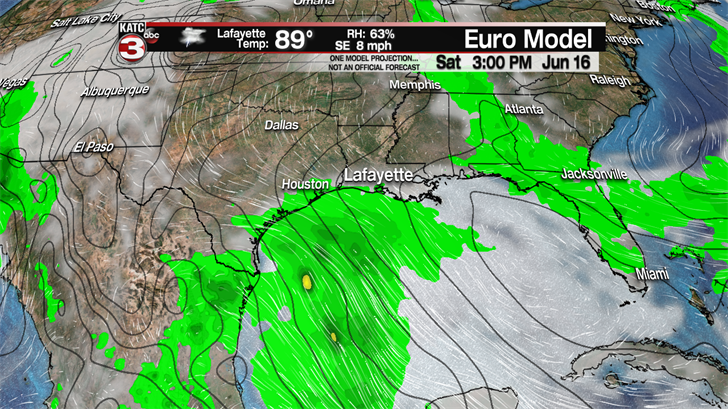 But the difference with the Euro model is that it has the system remaining relatively weak.

Also, the Euro keeps the majority of the moisture to our south and west with the lower portion of the Texas Coast being the area that sees the heaviest rains on Saturday and Sunday. 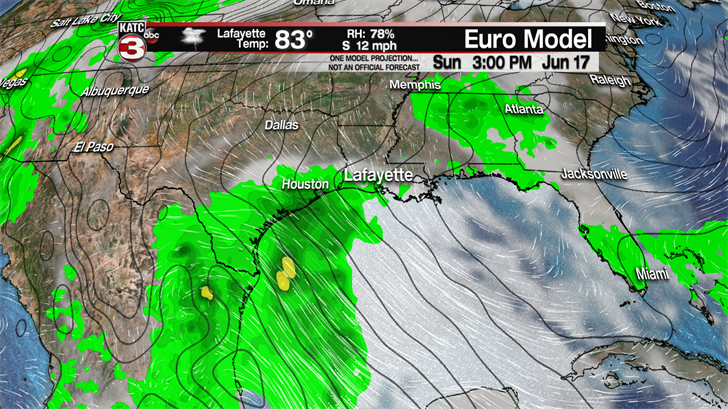 Either way we will be watching the models and the tropics for this potential wave in the coming days.

And remember these are just models and not actual forecasts and keep in mind that the models have trouble figuring things out until something actually starts to develop like we saw with Alberto a couple weeks ago.