Tropical moisture drifting to the Gulf of Mexico

There’s going to be a lot of chatter in the weather world this week, Twitter has already started to fire up, blog posts are being furiously typed out, and model images plastered all over the internet.

The thing to keep in mind all week is that as of Monday morning there is a lot of uncertainty in the forecast, and while it’ll be important to keep an eye on we can’t make any strong certain declarations or guarantees of what is to come this weekend.

All of that being said here is some early week thinking that most certainly will evolve and change over the next few days as more details emerge and models come together. 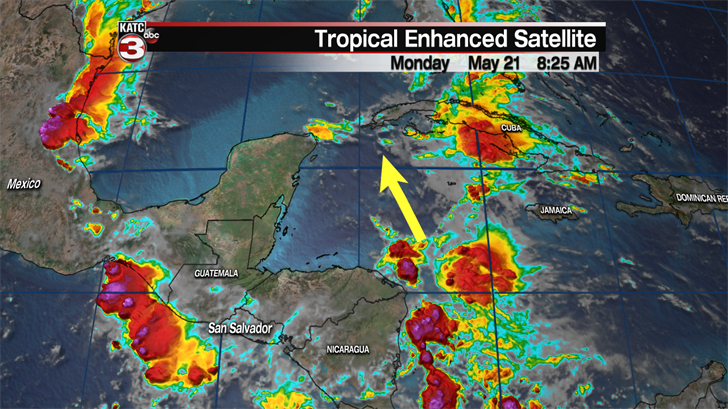 This is all originating with a surge of tropical moisture now located in the Caribbean which is expected to drift between the west edge of Cuba and the eastern tip of the Yucatan Peninsula.

The system as a whole is moving very slowly so it’ll be a few days before it makes it into the warm confines of the Gulf of Mexico, which is when we may start to get a better idea of what is going on.

As of Monday morning major global models seems to be very split with intensity and structure of the possible storm, which means a frustrating week for forecasters and Gulf Coast residents.

The two major models the GFS and EURO are the two to watch and see which ones changes the most over the next few days, which will give an indication which one ends up being more accurate

*This is raw model data, it is not an official forecast* 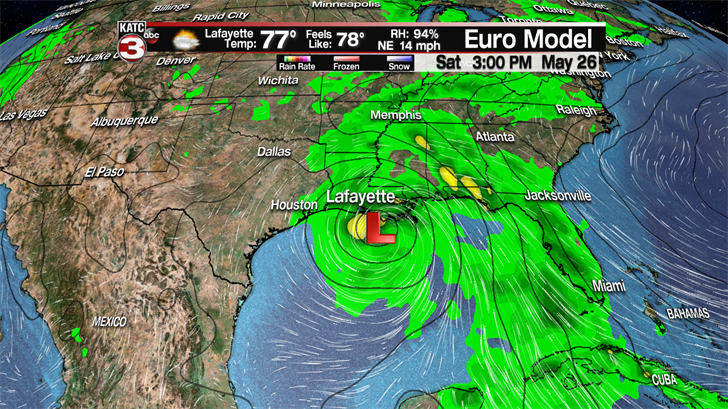 EURO solutions have a much more structured, meandering storm with a closed low moving on shore around Vermilion Bay before slowly drifting to the northwest.

This is the most drastic outcome and could be a potential flooding threat moving forward into the weekend, it is way to early to talk about specific rain totals but this type of rain event could cause some issues.

*This is raw model data, it is not an official forecast* 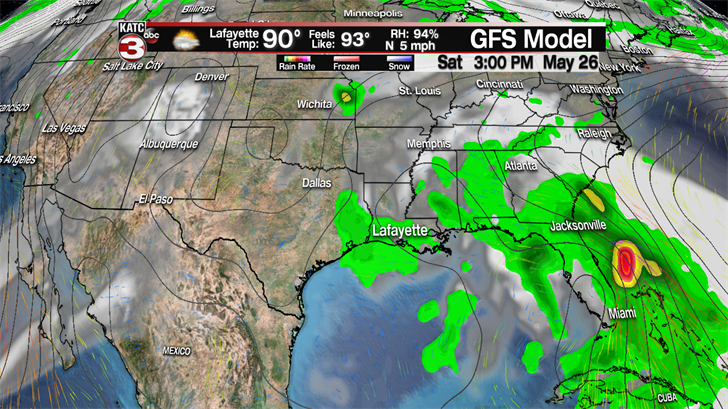 The GFS run for the same time is noticeably different from the EURO, and a much weaker system appears over the weekend lacking both the intensity and the structure.

Still a surge of moisture bringing us some periods of heavy rain but it is not as sustained or as heavy as the picture painted by the EURO (which is pictured above).

Plenty of eyes are on this system now and it’s certainly caught everyone’s attention so there will be a multitude of forecasts coming out with updates on the forecast.

It’s easy to get overwhelmed with data so be sure to take each update with a grain of salt and pay close attention to longer term trends instead of each model run.

As a quick reminder since we are now in the time of year when "social mediarologists" come crawling out of the woodwork make sure you are getting your weather information from a trusted source.

Stay tuned over the next couple of days as the forecast evolves and we’ll be sure to bring you the updates you need through the rest of the week.