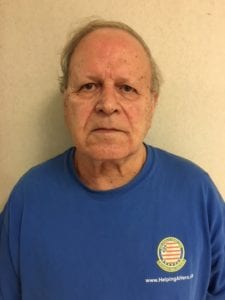 Alleged Abuse:  Convicted of multiple counts of aggravated crime against nature, contributing to the delinquency of juveniles and pornography involving juveniles

Where he is now: San Leon, Texas

Gilbert Gauthe was the first priest in the Lafayette Diocese who was publicly accused. The accusation came in the form of a civil lawsuit filed by a family who claimed their son had been raped by Gauthe for more than a year. Dozens of other victims would follow and millions of dollars of settlements would be paid out to victims by the Lafayette Diocese.

In a deposition filed in one of the Vermilion Parish lawsuits in 1985, a victim said the sexual abuse started after he made his First Communion and he began to spend the night with Father Gauthe at his home in Henry. This was a story that was told over and over; several of the victims who came forward reported that the molestation began after they became altar boys in the church.  The abuse would happen at the rectory, in the confessional. Gauthe would begin by telling them he needed to adjust their robes or do a physical on them, and then the abuse would escalate.

According to his deposition in one of the civil cases, Gauthe began molesting children soon after he was ordained in 1971. That deposition indicates that the hierarchy of the Diocese was aware as early as 1974, when a victim approached Bishop Frey.

According to other depositions, including Frey’s, those in power sent Gauthe to counseling, but also made him Chaplain of the Diocese Boy Scouts. He was transferred from New Iberia to Abbeville, where parents complained that he licked their children’s faces. He was forbidden from having children in his rectory bedroom, but continued to take children on camping trips, and even took a children’s sports team to Puerto Rico. He was then transferred to Henry, where he was the only priest in the rectory and again began having children as overnight guests.

One family refused to settle as others had and wanted their lawsuit heard in open court.  That family would go on to win a $1.25 million settlement.  One month after that suit was filed, in October 1984, an indictment against Gauthe was handed up by the Vermilion Parish grand jury.  He was accused of more than 30 criminal counts: aggravated crime against nature, indecent behavior with a juvenile and pornography involving juveniles, court records indicate. 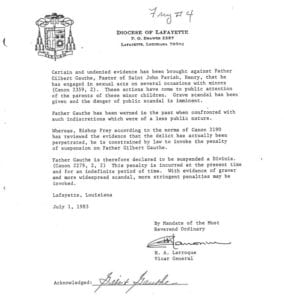 In October 1985, Gauthe accepted a plea deal from then-DA Nathan Stansbury that allowed him to plead guilty to most of the indictment against him and serve 20 years in prison. During that time he was to submit to injections of a hormone, which at the time was referred to as “chemical castration” and was thought to be an effective treatment for pedophiles.  He would testify in a deposition that while a priest he engaged in oral sex and sodomy with young boys, 35 of whom he could name, and with two young girls.

Court records from the 1990’s obtained by KATC name at least 47 victims, and show at least $12 million paid out because of Gauthe.

Gauthe served 10 years of his 20-year sentence, and within a year of his release was arrested in Texas, accused of fondling a two-year-old. He pleaded guilty in 1997 to injury of a child and was given probation. In 2008 he was convicted in Texas of violating sex offender registration laws, and served two more years in prison.

He currently lives in San Leon, Texas, according to the Texas Sex Offender Registry.