Alleged Abuse:  Accused of sex abuse in Calcasieu, Lafayette, and St. Landry parishes; State Police say the evidence was credible, and the church knew about the abuse, but too much time had elapsed to prosecute.

Where is he now:  Sentenced to a life of prayer and penance, residing in Pennsylvania (according to Lake Charles Diocese) 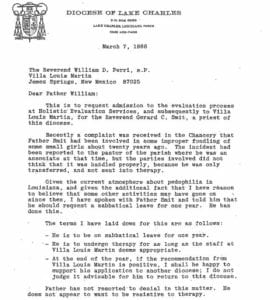 In 1986 Gerardus “Gerard” Smit was sent to treatment after a complaint was received that he abused little girls in Lake Charles in the 1960’s.  Church officials asked that he not return to the area when he finished his treatment.

A former altar boy came forward in 2010 to Bishop Michael Jarrell, claiming Smit had sexually abused him in the 1970s in Cankton at St. John Berchman’s.   Smit denied the allegations in writing from Delaware.

In 2011, Bishop Jarrell tells the Lake Charles Diocese the investigation into sexual abuse bore “at least the semblance of truth necessary to proceed according to the norm of canon law.”  Smit was told not to have contact with those under the age of 18 and refrain from public celebration of the sacraments or public acts of worship. 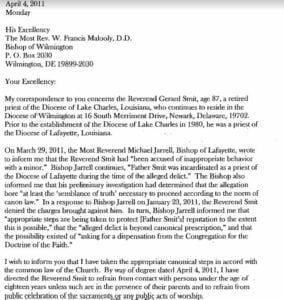 1950’s-1960’s : Alleged abuse in Youngsville and Cankton, according to the Lake Charles diocese

1959: Our Lady Queen of Heaven (& school) and Christ the King, Lake Charles

1965:  Letter in the Lake Charles’ personnel file saying there was a need for therapy for “hanging on to adolescence especially in the area of sexuality”

1982:  Victim reportedly tells deputies in Lafayette about sexual abuse from 1965-1970 in Youngsville but is told it was beyond the statue of limitations (according to church documents)

1986: Bishop Speyrer received a complaint regarding sexual abuse of young girls at Our Lady Queen of Heaven. Smit received “treatment” at Jemez Springs (according to church documents); asked not to return to the Lake Charles Diocese.

1996: The Diocese in Delaware contacts the Lafayette diocese to report a victim came forward alleging sexual abuse in the 1960’s (same victim who reported in 1982).  Lafayette officials say there were no reports of any incidents.

2002: Memo indicates Lake Charles diocese received a complaint from a victim who alleges sexual abuse in Youngsville (same victim who reported in 1982 & 1996). Lake Charles turns over investigation to Lafayette diocese.

2007: Sexual abuse allegations made to the Lafayette Parish Sheriff’s Office.

2010: Sexual abuse allegation made to Bishop Jarrell (according to church documents) from victim in Cankton that was abused in 1975-1976.

2011:   Smit was told by church officials not to have contact with those under the age of 18 and refrain from public celebration of the sacraments or public acts of worship.