A strong cold front will bring the threat of severe storms to Acadiana Saturday, most especially, during the morning hours.

Between now and then, look for fair to partly cloudy, breezy and milder conditions tonight with temperatures holding in the mid-60s in most locations.

Ahead of the main attraction Friday, look for partly to mostly cloudy skies, windy and warm conditions with temperatures topping-out in the lower 80s.

Gusty south-southeasterly winds near 15-25 mph can be expected with a few gusts pushing 35 mph or higher…a "wind advisory" may be issued at some point Friday. 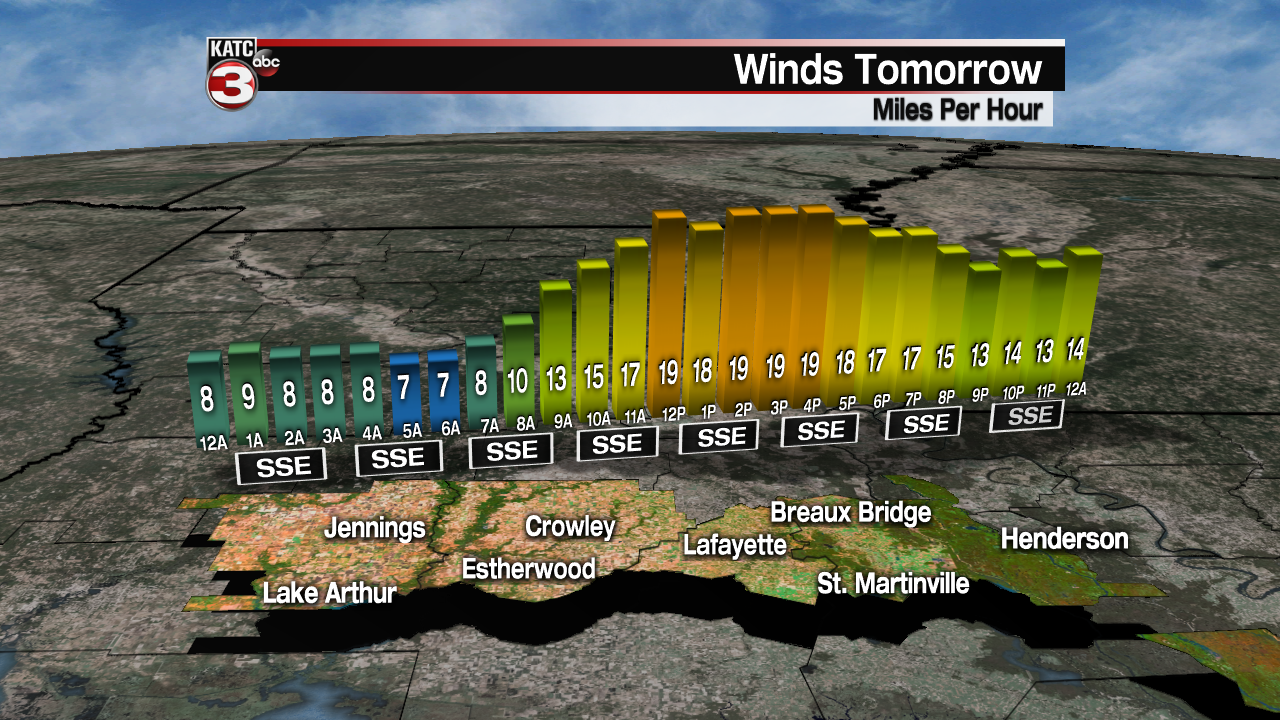 While most models are not indicating much in the way of any shower or thunderstorm activity, the atmosphere will quickly become primed with moisture and instability Friday afternoon into Friday night, so a few scattered thunderstorms may be possible.

Rain chances Friday afternoon should be in the 30% range, with any storms that get going could be potentially quite strong. Rain chances will increase to 50% overnight Friday, but will increase dramatically toward daybreak Saturday.

Several lines of storms will be possible Saturday morning, with timing ranging from the pre-dawn hours for the most northwestern portions of Acadiana, to 7-10 am prime-time (give or take a few hours) for the Lafayette area, pushing into the early afternoon hours for the eastern parishes of Acadiana.

The severe weather threat will be state-wide with this system, with the Storm Prediction Center (SPC) indicating a "slight" to "enhanced" severe weather risk. 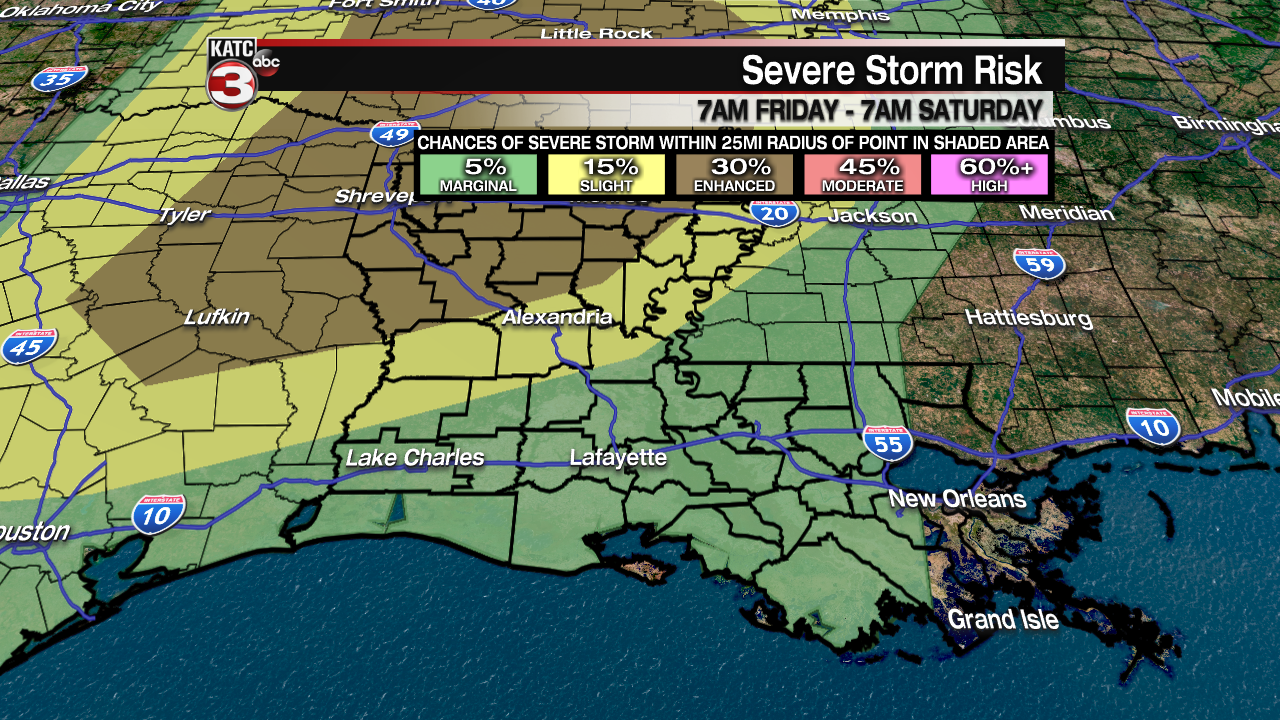 All modes of severe weather will be possible for Acadiana with the greatest threat of storms capable of producing damaging winds, but the tornado forecast indices are also expected to be pretty stout for the area, meaning there is the chance the SPC may upgrade the outlooks to a higher risk category as timing and dynamics of the storms comes into focus through Friday…stay tuned… 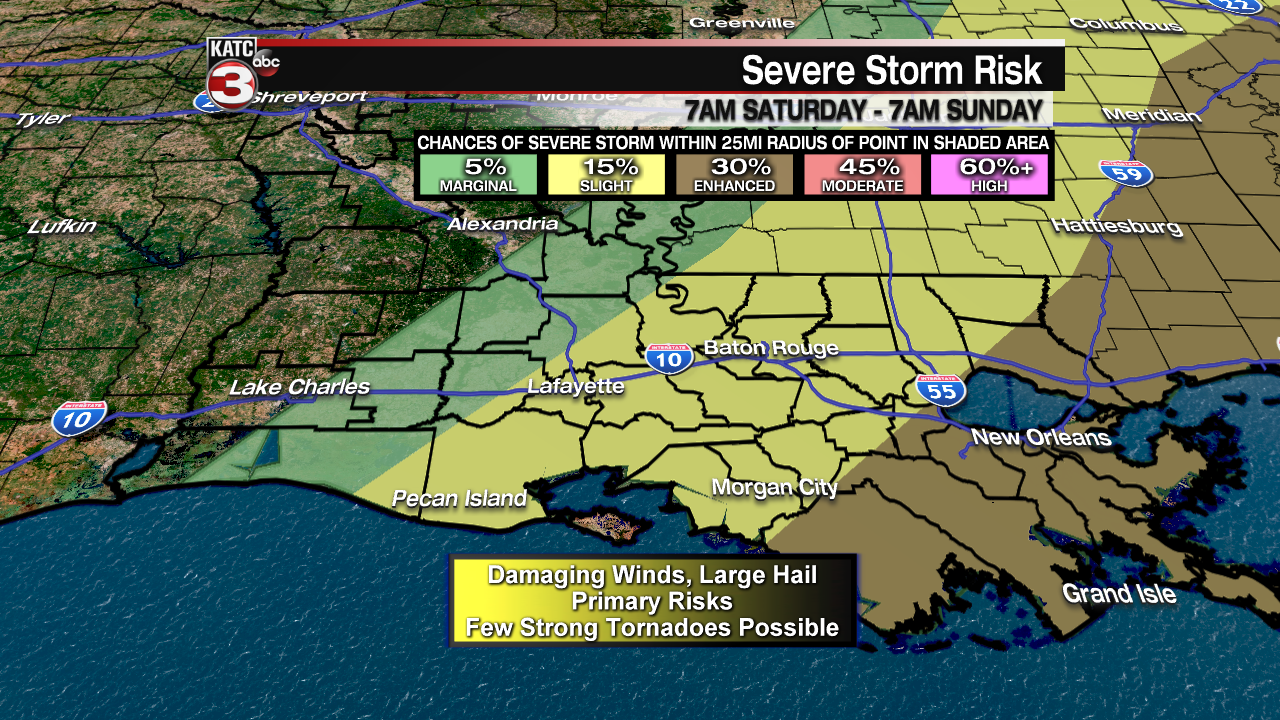 In addition to the severe weather threat, locally heavy rainfall will be possible with models generally indicating 1-3"…higher amounts will be most probably to our east, with lesser amounts, to our west.

Nonetheless, when it will be raining it will be pouring so brief localized street flooding will be possible, especially in a few isolated areas that may catch 3-4" in an hour or two of time. Widespread flooding however, is not expected. 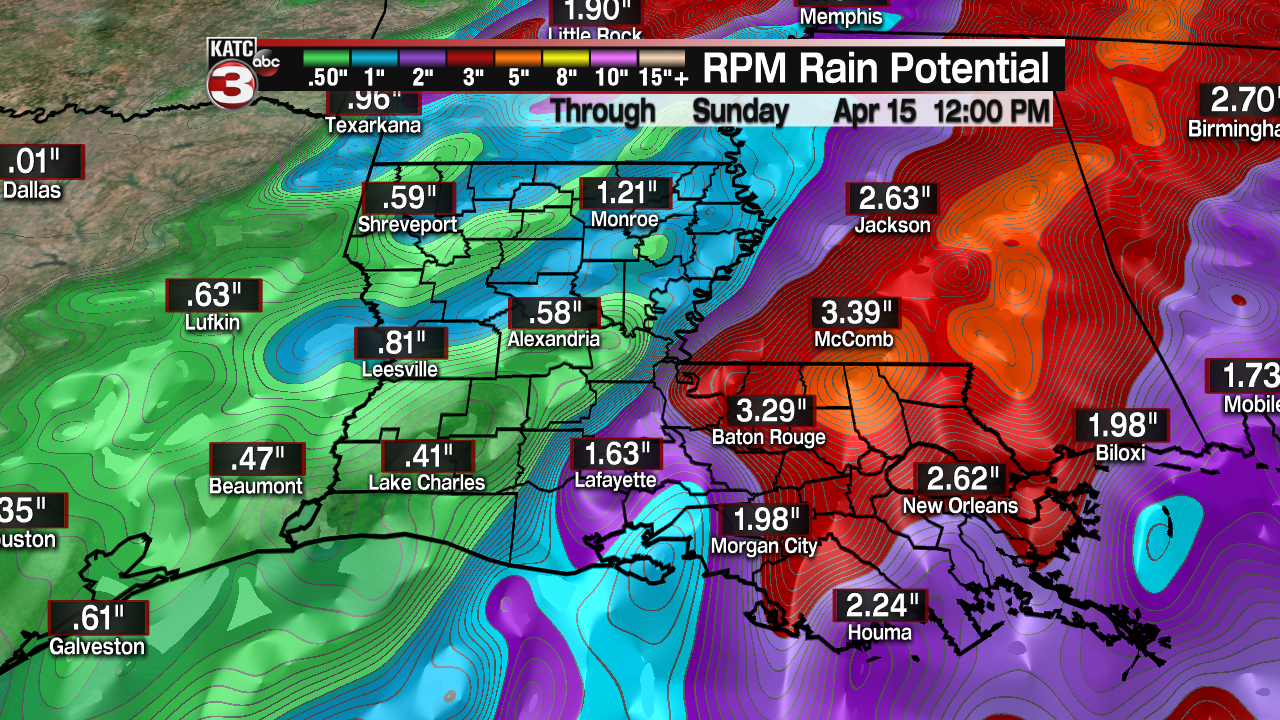 Storms should end by mid to late Saturday afternoon, with breezy and sharply colder conditions to follow overnight.

By Sunday morning, most of us in Acadiana will see temperatures dropping into the mid-40s, with wind chills threatening the upper 30s!

Sunshine Sunday afternoon will warm us back into the low to mid 60s, but breezy northwest winds will keep it feeling chilly.

Temperatures Sunday night into Monday morning will drop into the lower 40s, but a nice warm-up, back into the lower 70s, is anticipated for later Monday afternoon.

Much of next week should see lots of sunshine with a gradual warming trend…and you guessed it, another front, maybe not as strong as this weekend’s, will produce showers and storms, perhaps with a severe weather threat, next Saturday.