Tonight you will need to be weather aware as a line of strong to possibility severe thunderstorms will be diving south through Acadiana. 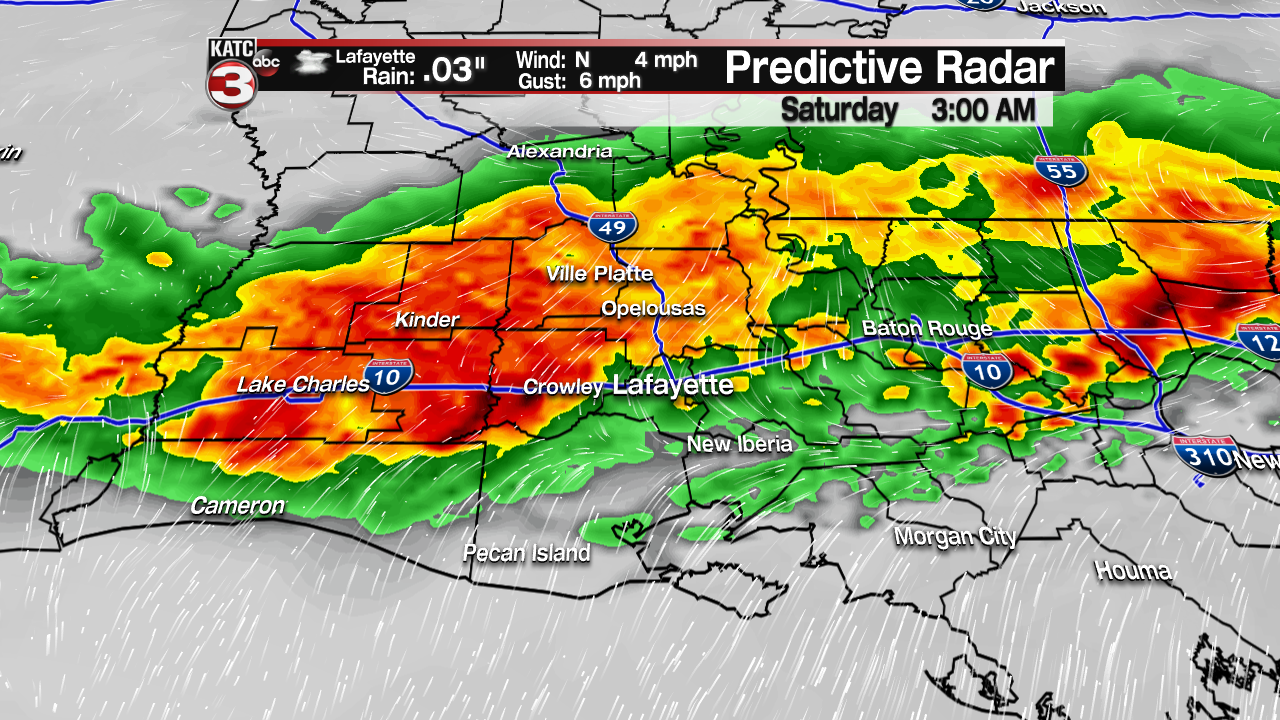 The storms should begin to move into northern Acadiana by Alexandria around midnight, push down into Lafayette about 3am and then move out into the Gulf by 7-8am. 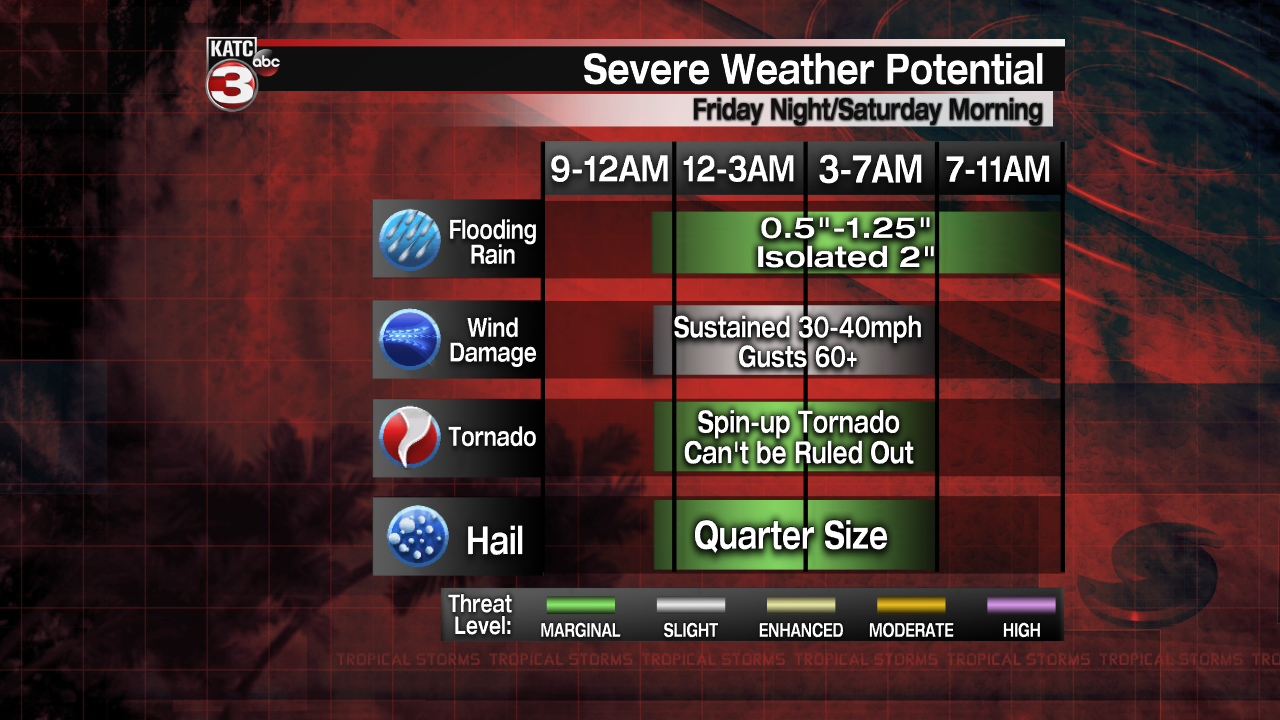 A Tornado watch has been issued for the northern half of Louisiana until 11PM where the Storm Prediction Center has them under an enhanced risk(30%) for severe storms to produce damaging wind gusts up to 60 mph, large hail and a few tornadoes. 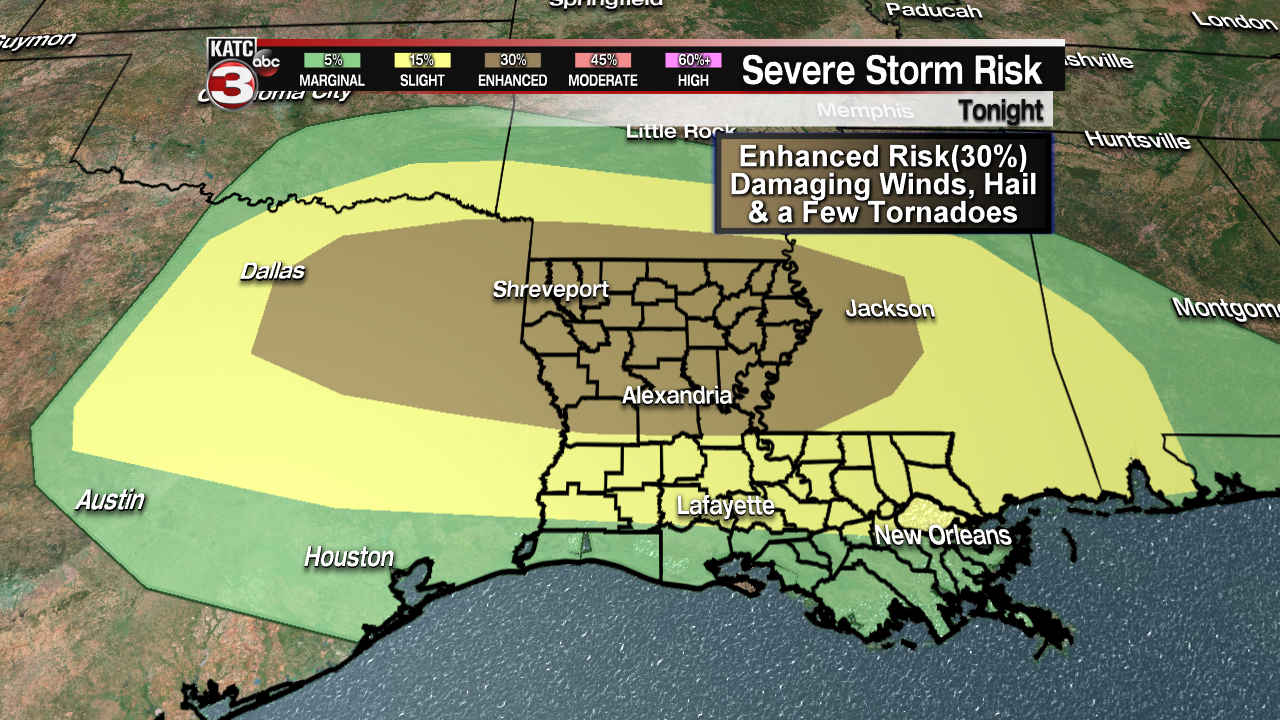 The storms should weaken some as they push south as it will be later in the night and the atmosphere will not be as favorable but you should still stay diligent as ares north of I-10 are under a slight risk(15%) for damaging straight line winds up to 60 mph, quarter size hail and maybe a quick spin-up tornado, while parishes near the coast are in a marginal risk(5%) for the storms to still be severe. 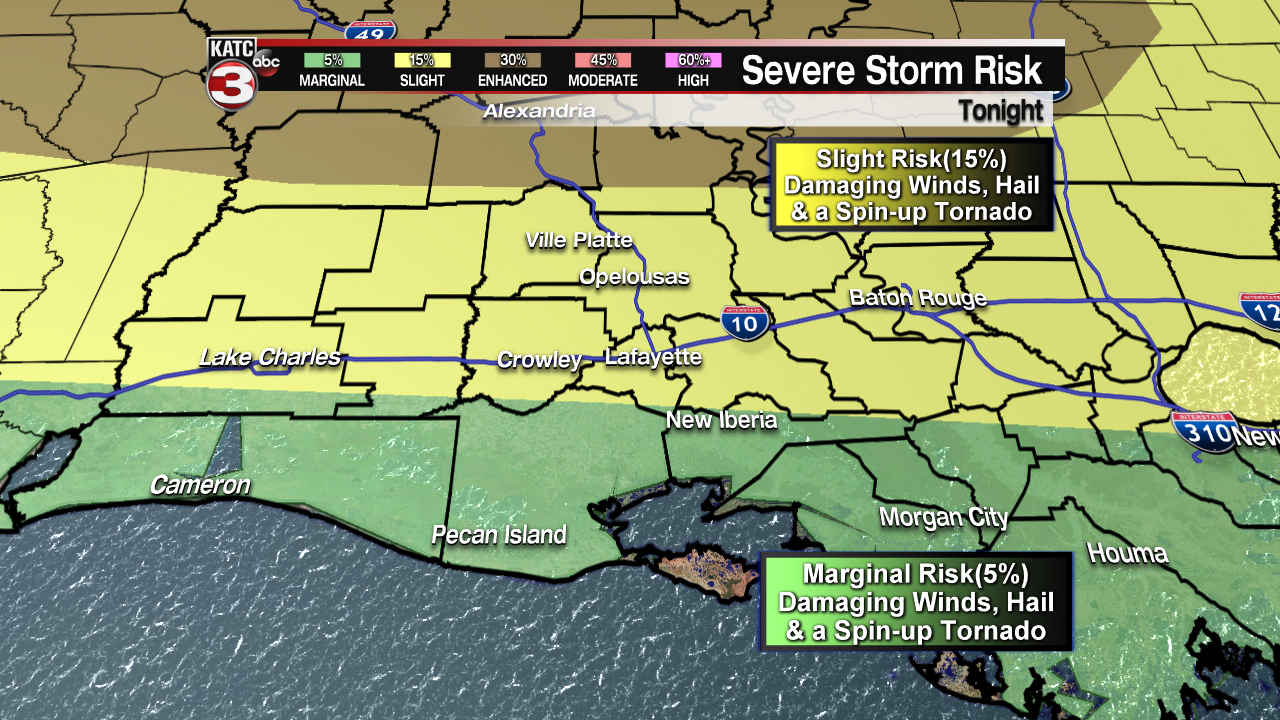 Like Tuesday night this should be a fast moving system so rainfall totals will be between 0.5-1" meaning flooding should not be a concern. 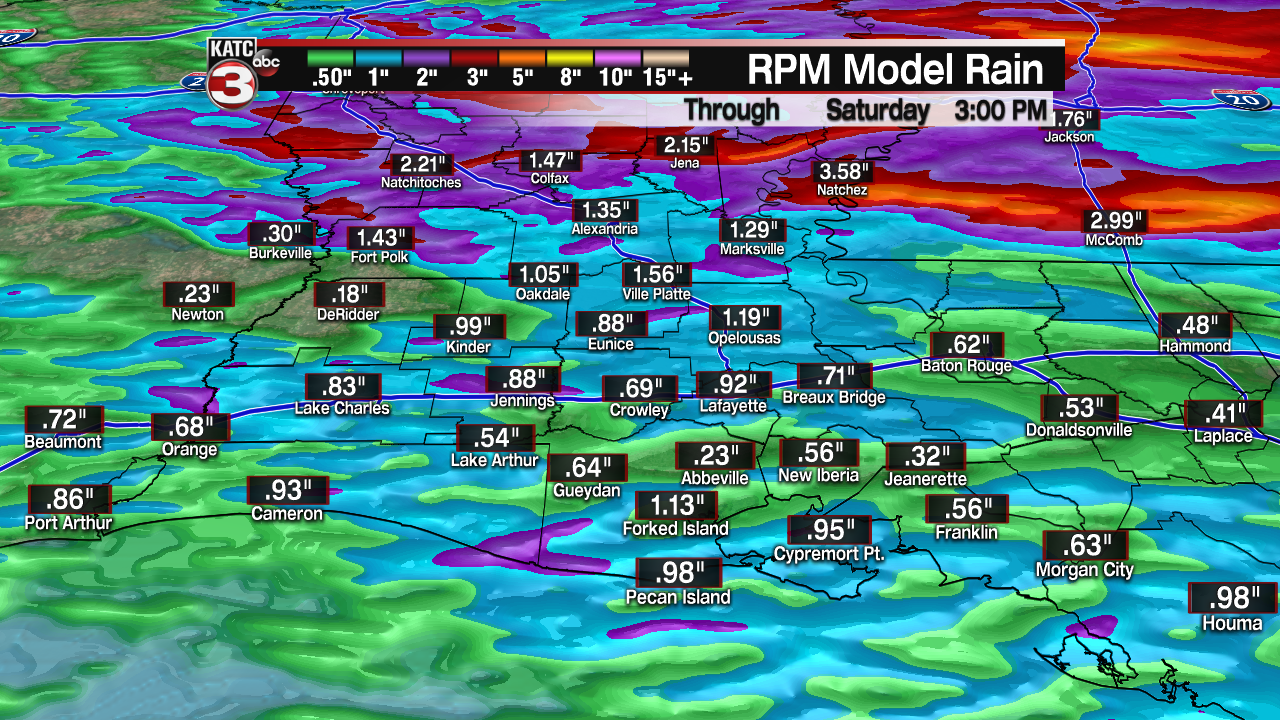 Behind this front cooler and breezy conditions will be sliding down over Acadiana as temperatures will fall throughout the day dropping into the mid 50s by the afternoon. 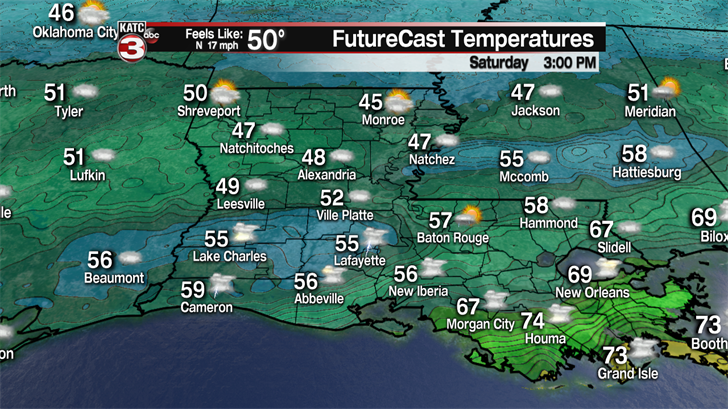 As for the winds they will be rather breezy with sustained winds out of the north at 15-25 mph and gusts up to 30 mph making it feel like the upper 40s to lower 50s Saturday afternoon. 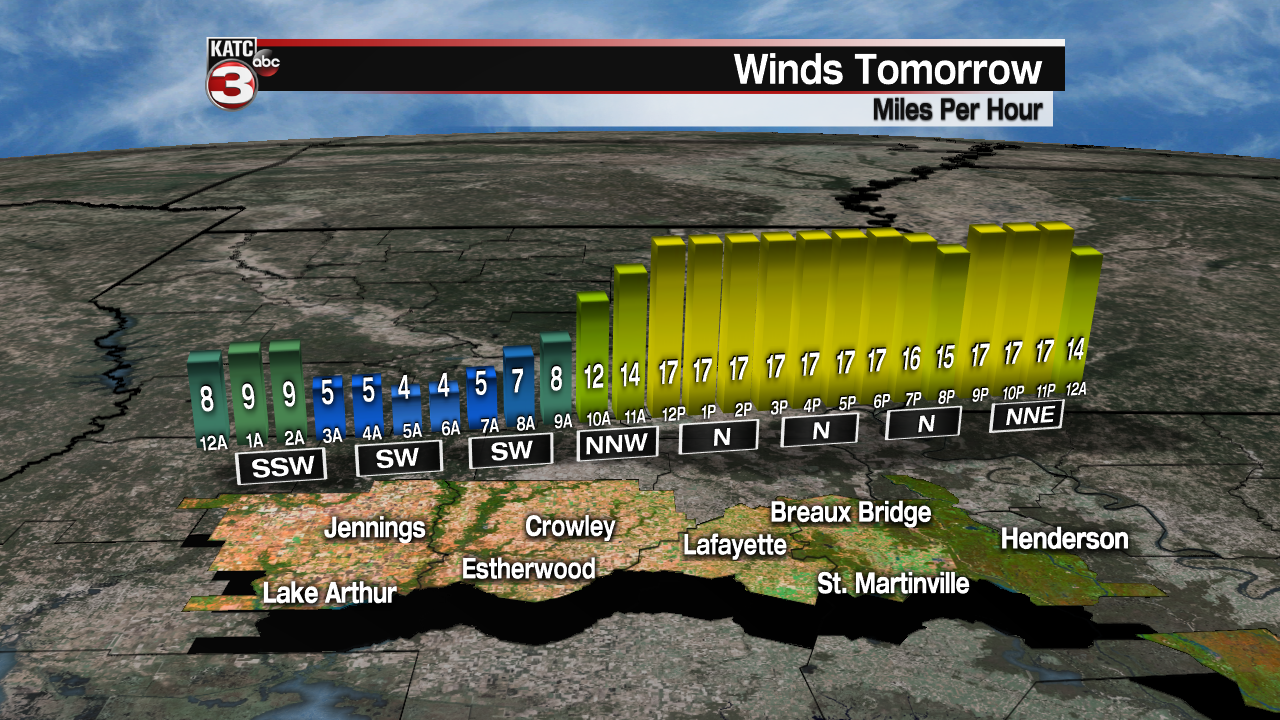 To go along with the cool and breezy weather there is still a 40-60% chance for a few scattered showers to slide across Acadiana on Saturday so it will not be a fun day to be out at the Po-Boy and Boudin festivals.

The coldest temperatures will be Sunday morning when lows drop into the low to mid 40s, but with the breezy it will feel like the upper 30s. Brrr!!! 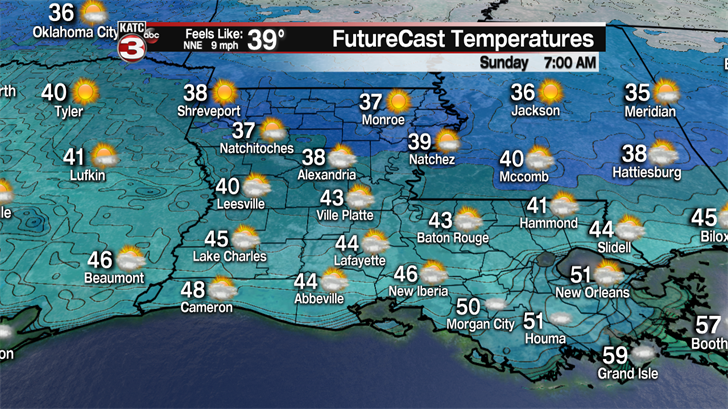 We should see partly sunny skies Sunday afternoon helping to warm temperatures into the low to mid 60s but that is still 10° below where we should be for early April. 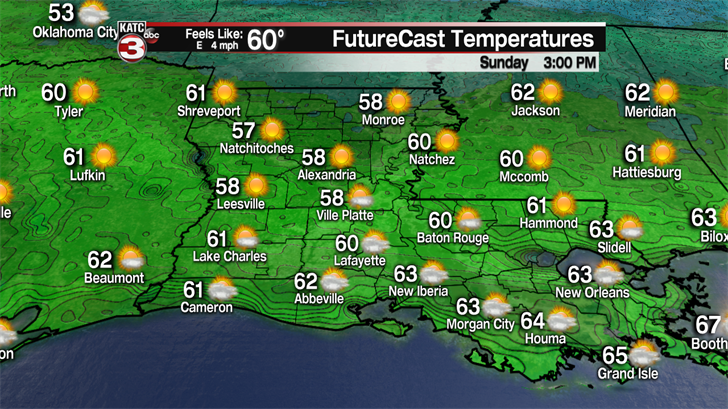 Overnight Sunday winds begin to turn out of the south so it won’t be as cool Monday morning with lows in the mid 50s.

Highs Monday afternoon should get back into the mid 70s but another cool front will move through producing a few scattered showers.

The models are a little off on the timing for this front as the Euro as the rain arriving Monday morning but the GFS is slower and has the rain moving through overnight Monday into Tuesday morning.

Either way once the front moves out into the Gulf we should have nice weather for the mid part of next week with lots of sunshine and highs in the mid to upper 70s.

Clouds start to return Friday afternoon as winds pick up out of the south pushing warmer and more humid air over Acadiana as highs climb into the lower 80s.

Then a third front looks to swing through Acadiana Saturday afternoon producing another round of scattered showers and even a few thunderstorms. 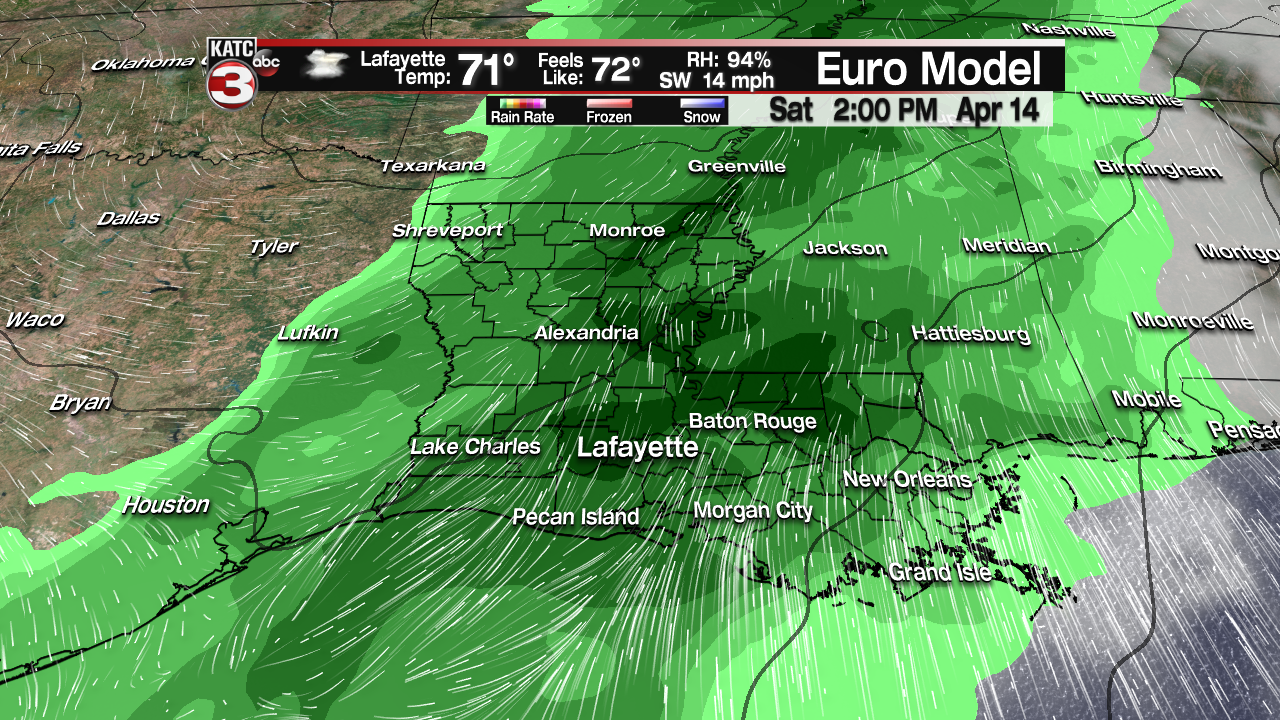