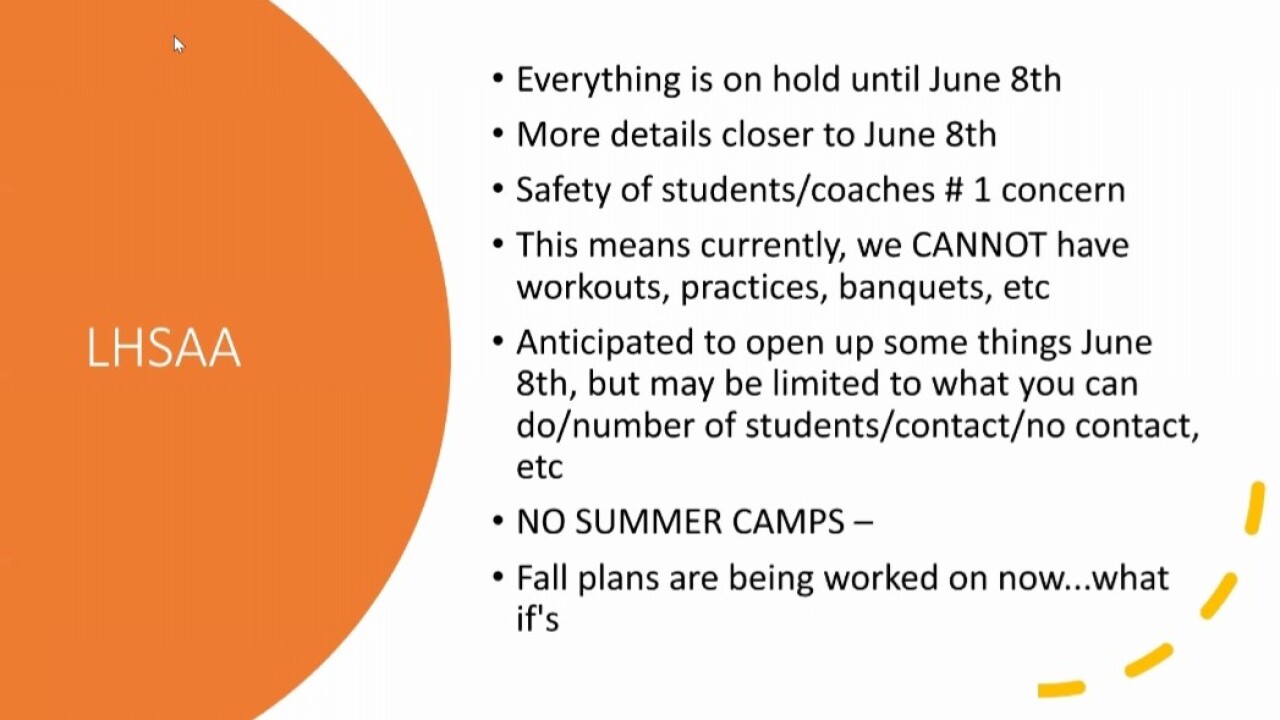 The LHSAA is withholding all activities until at least June 8th, delaying the league's return another three weeks.

"We needed to pump the breaks, I don't like that phrase, but I'll use it right now," said LHSAA executive director Eddie Bonine.

Monday Governor Edwards said Louisiana would move into Phase I of reopening Friday, opening the door for the league to uphold its May 17th return date. But during a conference call the league took emergency action extending the moratorium on workouts. The LHSAA doesn't usually have a say on off-season workouts, but Bonine called these unprecedented times, and felt it was important for equity between teams, and the safety of the players to postpone.

"I think it's important that we have all the proper safety measures in place," said Church Point head coach J.C. Arceneaux. "Make sure our procedures are solid and make sure we're able to keep them properly spaced out."

Several coaches we talked to Wednesday supported the LHSAA decision, citing safety concerns. But their concerns are bigger than just the players, some are fearful about their own health, and the community's.

"My wife and I both are in the critical age area. I don't wanna go home one day, and find out I did something to harm her either," said Notre Dame's Lewis Cook.

The Pioneers head coach is 69, and in an age group identified as being 'at-risk' to contract COVID-19. He said when workouts do resume, he plans to take extra precautions for himself and the community.

"I don't want to be responsible. Come out here too soon, and then kids go home and they effect the people at home. Now dad can't go to work or something happens. There's a lot at risk," Cook said.

"I think sometimes we lose focus on the importance of sports," said Arceneaux. "Sports are important on campus, but we don't want to put that before our community."

Arceneaux said he wasn't planning to bring players onto campus until the state moved into Phase II, anyways, which could come as soon as June 5th. When the league does green-light teams, he has a plan.

"We're probably going to take it in two-week increments. All we gotta do is in those first two weeks we will not enter the weight room. We're going to go with functional workouts, so we can be outside. Where we don't have to worry about do we have PPE."

The LHSAA is also working with guidelines handed down from the state. Contact sports are not permitted until Phase III, those are defined as football, basketball, wrestling and soccer. It's important to note that doesn't dictate who can practice, but how they can practice. Come June 8th, Louisiana is tentatively scheduled to be in Phase II where schools will be allowed to meet in groups of up to 25.

In a PowerPoint slide obtained my KATC, the LHSAA is telling schools they cannot begin to practice until at least June 8th.

That decision prohibits workouts, banquets and practices. The LHSAA is banning all summer camps this year and says restrictions are likely to be in place when teams are permitted to begin meeting.

Last week, LHSAA director Eddie Bonine stressed that summer workouts are at the discretion of the schools. Leading up to Wednesday's conference all, there was speculation that the league would enact bylaw 4.4.4 which allows the league to make special rules in the name of fairness and sportsmanship. It's unclear, however, if the league enacted this rule for setting the June 8th timeline.

"I think it's important we have all the proper safety procedures in place. Make sure our procedures are solid," he said. "When kids get here, we're able to check their temperatures and keep them properly spaced out. To come up with a plan instead of just trying to rush back in. Because we do have a responsibility to the community to make sure that we're bringing those kids in here, we're keeping everyone safe and we're not spreading the virus in Church Point."