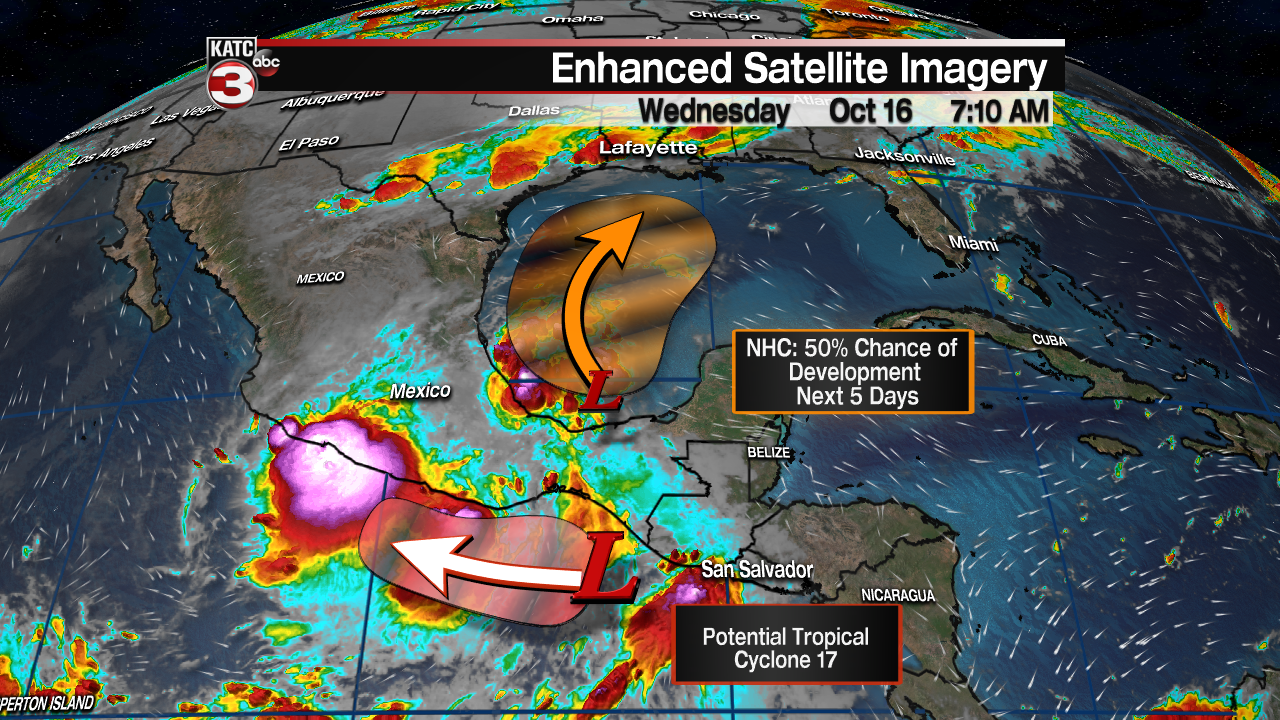 The National Hurricane Center bumped up the chances of some tropical development, and models seem to be persistent in some weekend development, so let's run through the scenarios and how they pertain to Acadiana.

Those who may be unsure what it is we are referencing there's a tropical wave in the south Bay of Campeche that is continuing to show signs that it may become a tropical system, a Hurricane Hunter has been scheduled to fly this storm Wednesday afternoon.

Development in this part of the Gulf always raises some eyebrows, and it'll be closely watched as it's set to track east across the Gulf of Mexico and bring heavy rain to portions of the Gulf Coast.

Models are similar on the eastward drift but haven't yet reached a consensus on the final intensity of the storm, so let's run through the two major models and get a sense of what is likely going to happen.

The EURO model is a little more bullish on the system developing as it moves across the Gulf of Mexico, and has been pretty consistent over the last several days which would help with some forecast confidence.

Where the EURO has evolved though would be a slight drift east of the system taking the heavier rain to an area between New Orleans and Florida's Big Bend region.

While we would see plenty of clouds and a strong tropical breeze this would keep the worst of the weather to our east, bringing us only a few showers ( rain chances were lowered slightly for Saturday in my Wednesday forecast).

The good news is that there's no chance of the steering currents breaking down and the system stalling or drifting back west as a cold front will be sliding in promptly afterwards.

Rain totals aren't overly impressive per the EURO model, but it's a tight gradient between no substantial rain and the 5" the EURO has pegged for Biloxi.

In the event of development, as will be typical for a storm like this, all the weather will be built on the east side of the storm which would leave us with a nice breeze coming in from the north.

Soaking showers of several inches though will be likely from New Orleans through all the way to eastern portions of the Florida Panhandle.

This could actually be seen as beneficial rain as much of the south east has been dealing with drought conditions so a tropical soaking could actually pull them out of drought and bring relief to some of the drier areas.

Regardless of where the heaviest rain sets up coastal flooding will be likely through a good portion of the Louisiana's south east coastline and tides will be running high through Mississippi into Florida as the system comes ashore.

The GFS is coming around to the EURO but doesn't seem to be on board with the intensity, although the path is almost identical except a little more to the east.

Again this would keep Acadiana out of the cross hairs and would even bring in some cool, dry air from the north by being far enough east that we may not even pick up on some of the clouds.

The GFS rain totals are down from what the EURO is indicating for many areas, keeping the heaviest rain just offshore and the hot spots don't seem to spike as high as the EURO does either.

Right now would tend to lean closer to the EURO output since it's been a little more consistent but no matter what your model preference is it would be best to prepare for several inches of rain across the Gulf Coast.

Those traveling outside of Louisiana this weekend and heading east will have some wet, windy weather to contend with no matter your destination.

Keep in mind that these forecasts can change quickly, although we should start to get a better idea once we get back some of the data from the Hurricane Hunters.

Be sure to stay tuned to KATC for the latest.