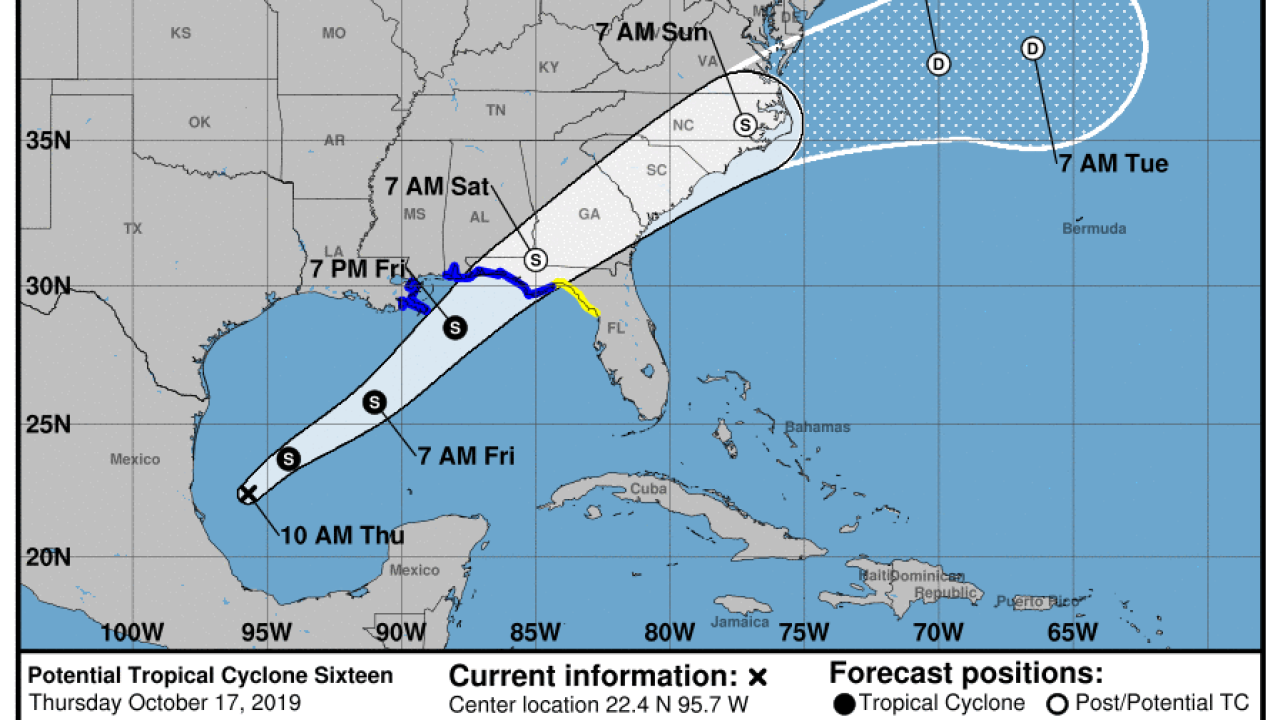 Potential Tropical Cyclone 16 is expected to become a tropical or subtropical system over the Gulf of Mexico on Thursday, October 17.

The National Hurricane Center has given the system a 90 percent chance of development. If the storm develops it will be called Nestor.

Tropical Storm warnings have already been issued for portions of the Gulf coast.

The warning includes portions of the Louisiana coast from Grand Isle to the Mouth of the Pearl River.

The storm is located approximately 140 miles east of Tampico, Mexico and around 620 miles southwest of the Mississippi River.

Forecasters say that the system is currently moving north at 8 mph and is expected to turn northeastward Thursday afternoon and into Thursday night.

The system is expected to near the Gulf coast on Friday and Friday night.

The National Hurricane Center has bumped up the chances again for development in the Gulf of Mexico, with the likelihood now up to 80% of a tropical storm in the next few days.

If necessary a hurricane reconnaissance craft will investigate the storm later Thursday afternoon which would go a long way in telling us how this storm will behave.

Most models are in fairly good agreement about the path of this storm, a few differences in intensity linger, but for the most part there's some pretty good confidence in the forecast.

Residents in Acadiana will avoid any major impacts with the worst of the weather built on the east side of the low, it doesn't look like this storm will be symmetrical at all, leaving us on the dry side.

The biggest issue for Louisiana will be some coastal flooding along the southeast coast, water will be pushed up a good bit due to the steady winds from the south piling up the tides.

When it comes to the track there's been very little shift from the EURO since Wednesday, but it looks like intensity has crept up a little and it's moving the system a little faster.

A faster moving storm is also expected on the GFS, so expect a landfall late Friday afternoon into early Saturday morning with the early impacts hitting the Gulf Coast around lunch time on Friday.

The quick speed of the storm will keep it pushing north which will help limit flooding as there won't be a chance for the rains to pile up, keeping rain totals a little more manageable.

Preventing the system from sitting over the warm Gulf waters will also be beneficial in keeping it from really building up intensity so hopefully the fast moving trend continues.

Thursday's GFS run has trended even further east, which would pull away some of the rain out of New Orleans but not substantially change the major impacts.

Across the Gulf Coast it looks like on average places could expect to see 2-4" of rain, although concerning are a few intense hot spots offshore which would be problematic if they set up inland.

It's hard to underestimate tropical downpours and one should always be ready for more rain, but it is encouraging that the early numbers seems to be much more reasonable then we've seen with other tropical systems lately.

As mentioned Wednesday the southeast is actually dealing with a drought so some tropical showers would actually be beneficial to many.

It's worth pointing out the difference in the two precipitation total models which show the change in impacts from a small shift to east or west from the storm, either way it looks like Acadiana will be in the clear.

Those will be offshore will be in for a windy weekend regardless of development as the gusts will be pushing 50 mph and sustained around the 20-30 mph range through the weekend.

All in all it won't be a very pleasant weekend at the beach for anyone headed over there with windy, rainy weather but the west edge of the system could mean a nice cool breeze for us here in Acadiana.