Sally rapidly strengthens to a Hurricane; expected to be a Cat 2 at landfall 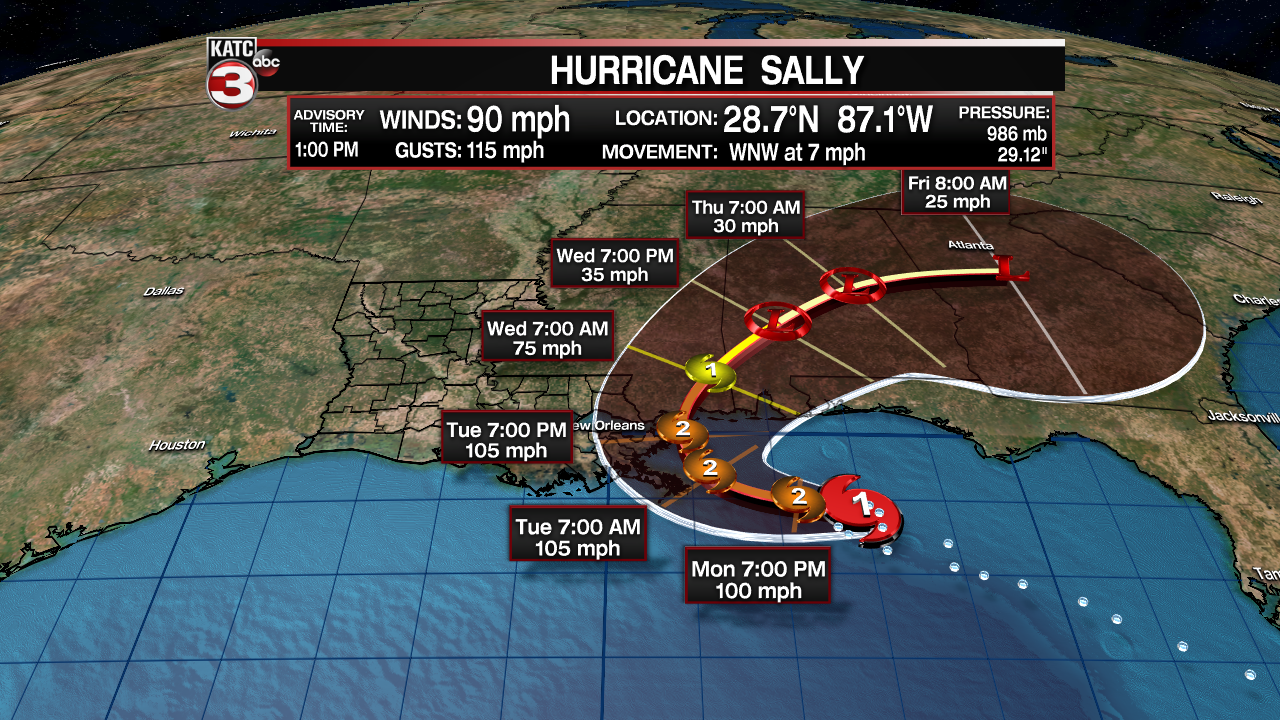 UPDATE: Sally has now been upgraded to a Hurricane.

According to the National Hurricane Center, hurricane hunters found that Sally had rapidly strengthened into a hurricane.

At 11 am, the storm was officially upgraded to a Category 1 storm with maximum sustained winds around 85 mph.

A new track from the National Hurricane Center has Sally slowly strengthening and could be in the process of building its eyewall which is building confidence that Sally will develop into a hurricane by the end of the day Monday.

The forward movement has slowed to a crawl which will give Sally more time over water to get its act together, so expect an intensity of a strong Category 2 storm, with winds around 105 mph around landfall.

A nudge eastward would also minimize the interaction the storm would have with land which could lead to additional intensification.

This eastward pull will continue to minimize the impacts for Acadiana and could further alleviate some of the problems for other areas east of the Atchafalaya Basin, unfortunately, storm surge on the eastern coast still looks serious.

It continues to look as if the eastern coast from the mouth of Mississippi to about Ocean Springs could be seeing a 7-11 ft storm surge, 4-6 along the Lake Pontchartrain, and even a 4-7 ft surge now stretching into the Mobile Bay.

Locally tides could be running maybe a foot or two higher, so localized coastal flooding possible in Acadiana but nothing that would be too severe or out of the ordinary, this could mean significant flooding though on the eastern coast particularly those areas outside of the levee protection system.

Surge is only going to be one part of the equation, due to the slow moving nature of the storm heavy rains will result in flash flooding with the worst of the rain taking place just to the east of the center.

This could mean that an area between the Louisiana/Mississippi border and the extreme western panhandle of Florida could be looking at around 10-15" or rain with hot spots peaking around 25", a significant threat for inland flooding.

Winds around the center will be close to 90 mph and the hurricane warning has been expanded to include coastal Alabama, with tropical storm force winds stretching a little further to the east then it does the west.

This could produce some breezy conditions in Acadiana but it'll be gusty winds from the north which may actually make us a little drier and sunnier over the next several days.

While the impacts for Acadiana are diminishing those with interests along the central Gulf Coast should continue to monitor this storm very closely.

The next advisory is due out at 1:00 pm central time.