Tropical Storm Nestor has formed in the Gulf of Mexico 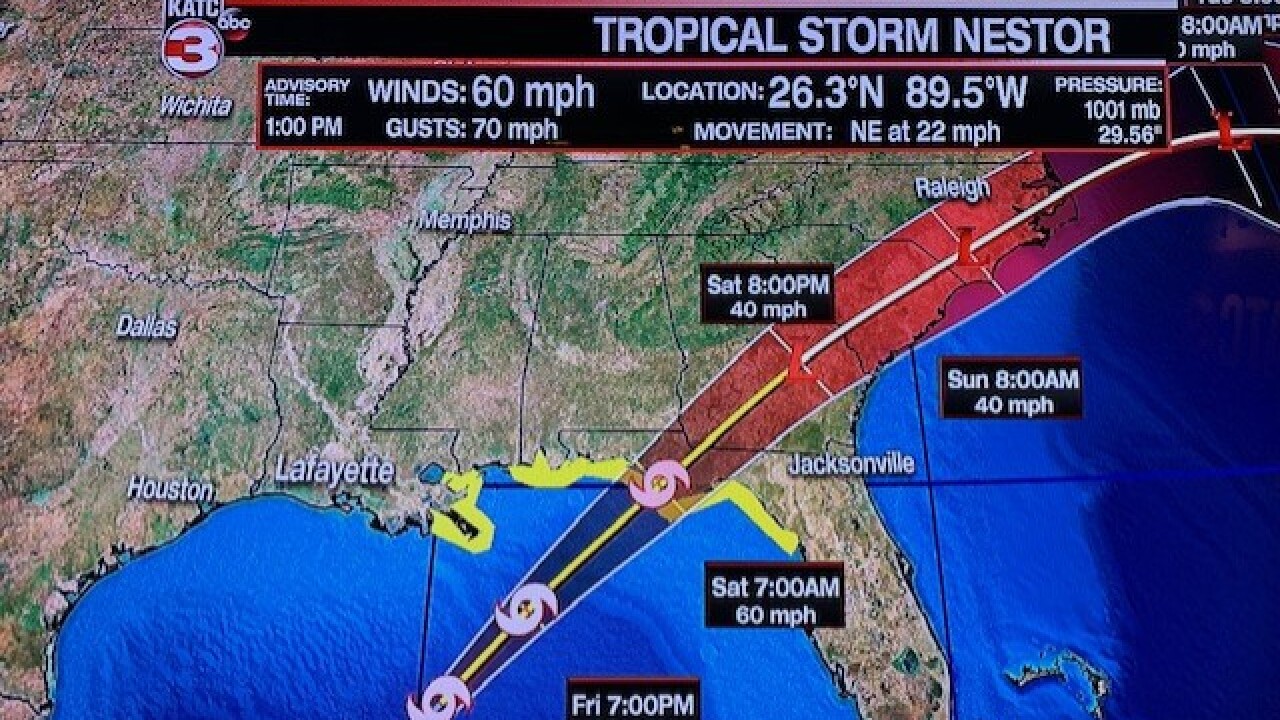 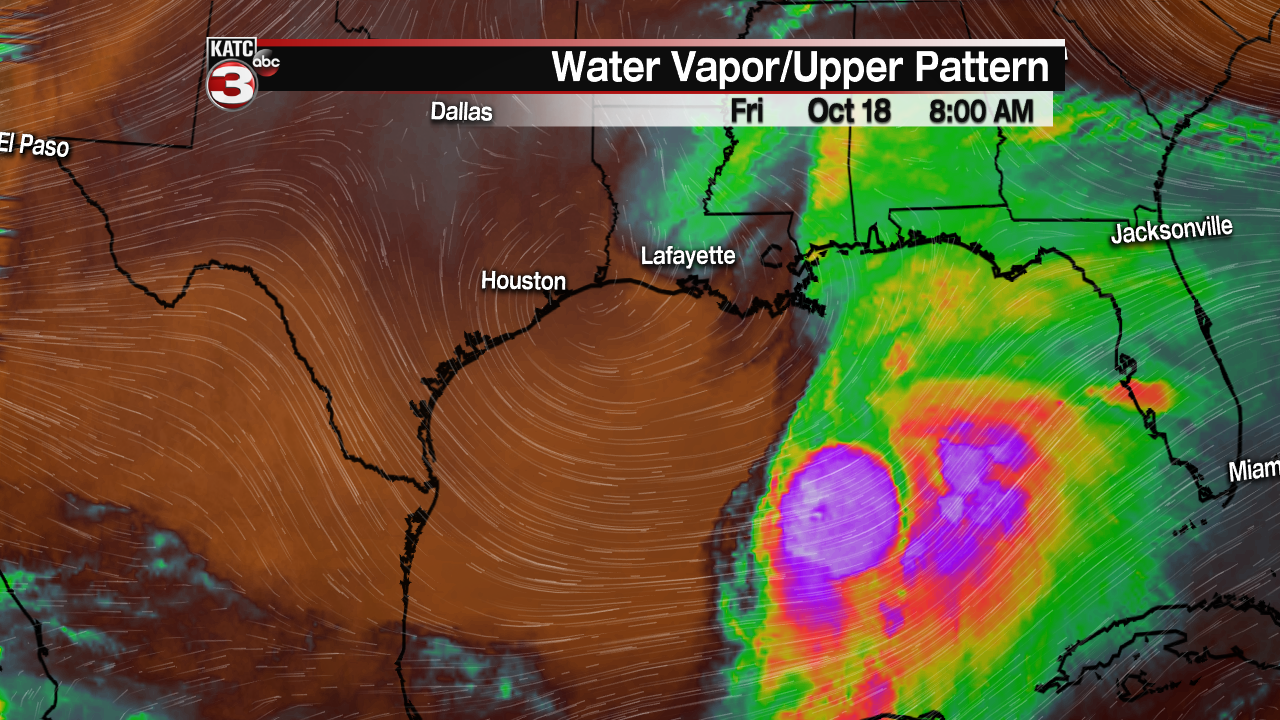 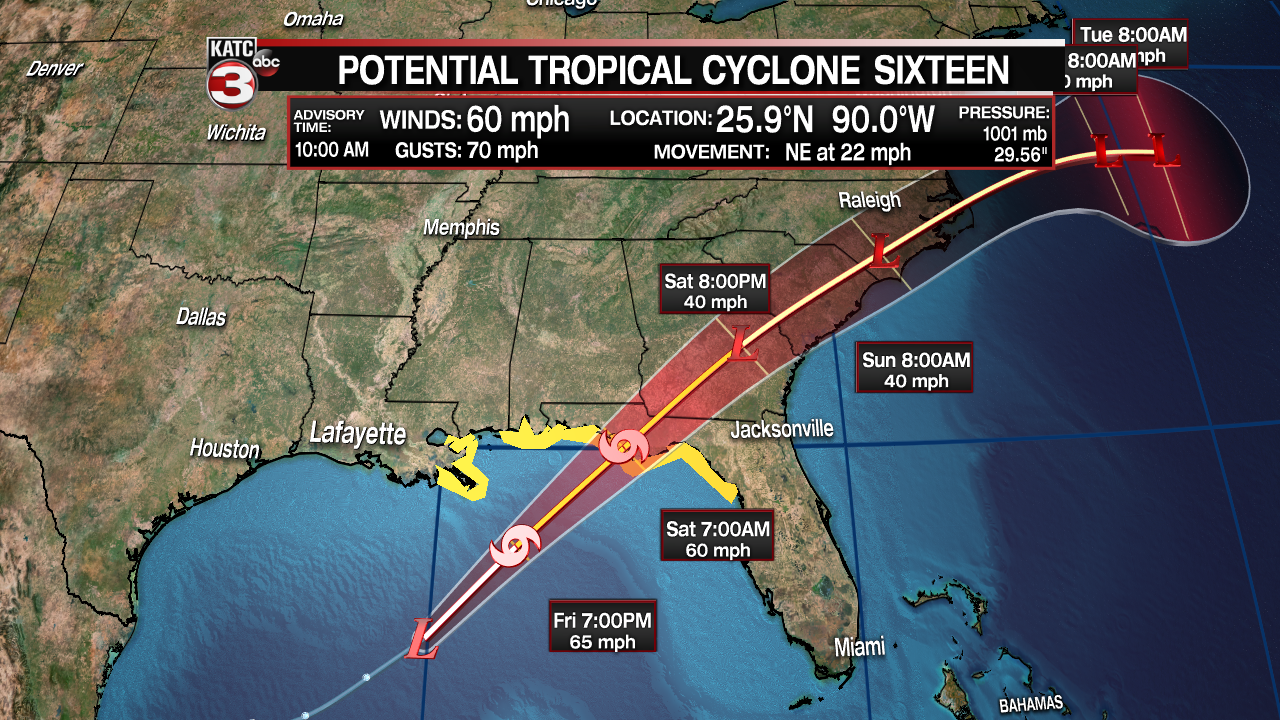 No substantial change to the track but the winds have picked up a little now sustained at 60 mph with gusts up to 70.

A system in the Gulf of Mexico is still waiting on the official designation as "Nestor" but regardless of the finer nuances of a named storm it's producing tropical storm forced conditions in the Gulf.

The latest track from the National Hurricane Center takes PTC 16 way to the east of Louisiana and making landfall somewhere close to Panama City as a tropical storm with winds around 50 mph.

There's been very little change in the overall track of this storm, and even the intensity forecast for the most part hasn't really changed all that much from the last several days.

It's worth pointing out how quickly this storm is moving which will help minimize the overall impact, by not allowing the winds, rain, and seas from piling up on each other.

Since the storm is so heavily sheared to the east the impacts for Acadiana will be minimal, rains will start around New Orleans but areas west of the Crescent City will for the most part be dry.

The winds will be confined predominantly to the center and the range won't stretch too far out, staying out of Louisiana and not arriving along the Florida coast until late Friday night/early Saturday morning.

Tropical storm forced winds will continue into parts of Georgia which could cause some power outages and knock down weaker vegetation and toss around light lawn furniture.

The biggest issue for Louisiana, and even Acadiana, is the possibility for some coastal flooding as tides are going to be running well above normal.

Plaquemines Parish will see the worst of the rise with tides pushing 2-3 feet above normal, Cypremort Point and other areas along Vermilion Bay will see the high tide roughly a foot or two above average.

Rain fall will likely be more beneficial then nefarious for most of the south east who could use a system like this to try and break them from a drought, rain totals in the 2-5" range would certainly help the water table.

That being said with tropical system there is always the potential for localized flooding, especially on low lying roadways so travel should be avoided along the Panhandle late Friday and early Saturday.

Even though the Gulf is still running warm, having not had much of a chance to cool from a warm summer, the overall pattern isn't favorable for rapid intensification.

In fact looking at the water vapor imagery there is a tremendous amount of dry air getting forced into the system and it's battling a lot of shear to the west, this could force impacts even further outside of Acadiana.

If you have plans along the Panhandle be prepared for a wet and windy night, but this system should be passed through by Saturday afternoon and the rest of the weekend is looking good.