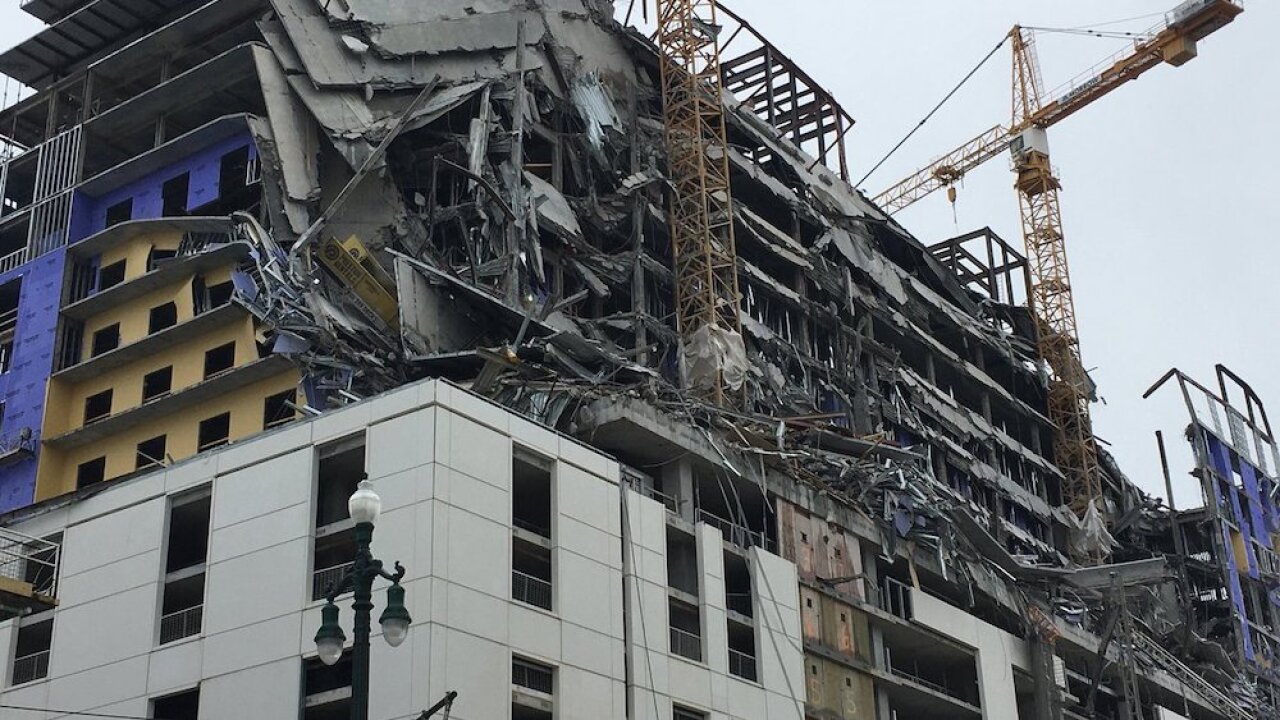 At least two people died Saturday when a hotel under construction in New Orleans collapsed.

Rescuers resumed searching Sunday for a worker trapped in rubble after a deadly construction collapse in New Orleans , officials said, but the building's instability is making for a precarious situation.

"As you start to move debris, you've got to make sure that everything is shored up," New Orleans Fire Department Superintendent Tim McConnell said, asking for patience as teams work to ensure the structure is safe.

Two people were killed in Saturday's collapse and at least 30 people were hospitalized, authorities said. All but one of the injured have been discharged, they said.

One body had been removed from the site but has not yet been identified, Mayor LaToya Cantrell told reporters Sunday evening.

Crews were working to remove the second body, she said.

The mayor visited the last hospitalized victim at University Medical Center, she said. He is in stable condition after undergoing surgery on his femur Saturday, his family is en route to New Orleans and he is "in the best of spirits that he can be in," the mayor said.

"People matter, and he was an employee on the eighth floor. Happened very fast," Cantrell said. "As he was talking to me, tears were, of course, in his eyes."

Crews had suspended the search for the missing worker, but McConnell said Sunday that teams had entered multiple times into the work site today as the search continued.

"Until we know different, we will stay in the rescue mode," he said. "Obviously, life safety is always our No. 1 priority."

A crane brought in early Sunday to help stabilize the structure and facilitate response operations was being set up late Sunday morning.

The crane was on a job site in Baton Rouge, and it received a special police escort to New Orleans, McConnell said. It generally takes three hours to erect a crane, which weighs about 110 tons, he said.

Several engineers have also been brought in, while others — including one traveling from Germany and slated to arrive Sunday evening — are on their way to the site.

More than 100 people were working on the soon-to-be Hard Rock Hotel near the city's historic French Quarter when the building gave way, Citadel Builders spokesman Brian Trascher said in a statement.

"Citadel representatives remain engaged and will be working with the City and engineering experts throughout the night and until a solution can be implemented," the statement from the company, which was the general contractor over the project, said.

Authorities have not said what caused the collapse, but Cantrell promised a "relentless" investigation into the incident. The Occupational Safety and Health Administration would join the probe once rescue efforts were complete, she said.

Video footage of the building crashing to the ground shows workers emerging from a cloud of dust after the building's upper floors collapse, leaving debris littering the street below.

Mandatory evacuations in the surrounding areas were issued Saturday as city officials said the building was stable but unsupported, CNN affiliate WDSU reported.

There was a strong possibility of further collapse, McConnell said Saturday. He compared Saturday's damage to that of an earthquake.

A crane weighing several tons that was attached to the building was unstable and could also collapse, McConnell said.

"All residents should continue to stay away from the area, and to heed the street closures and traffic warnings," Cantrell said in a tweet Saturday night . "We appreciate the public's response and support, and we are praying for the victims and their families."