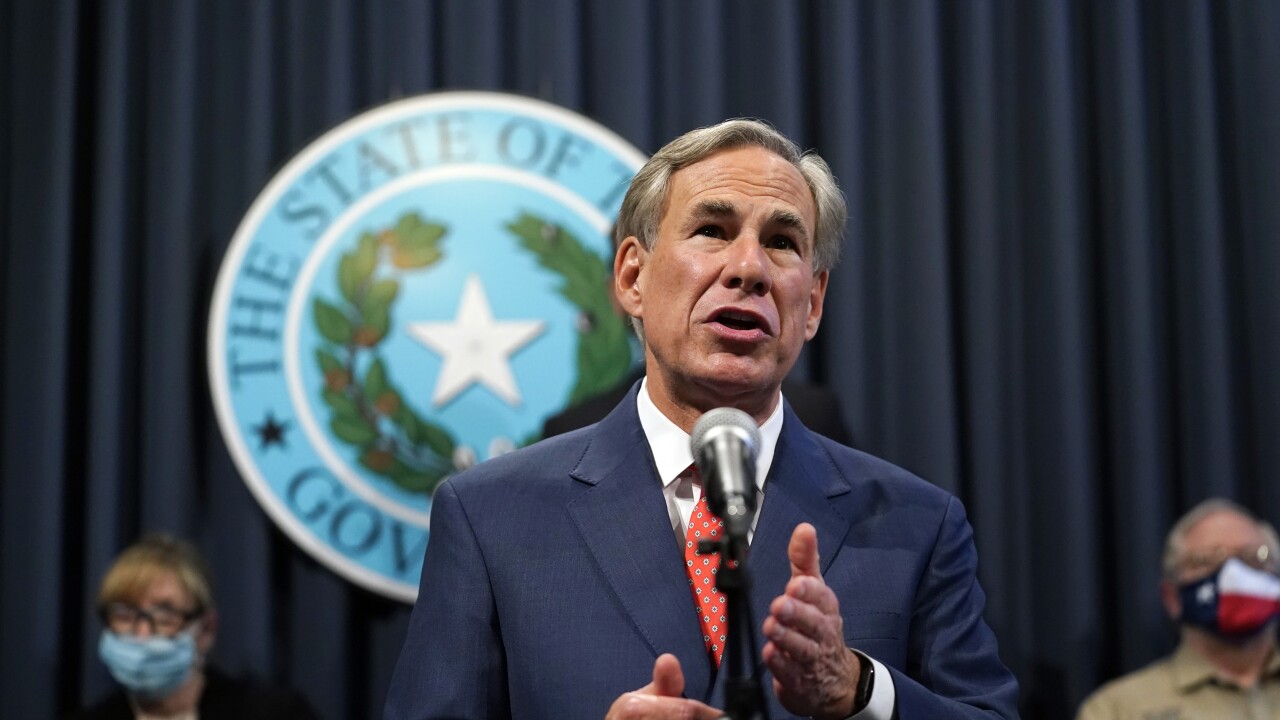 AUSTIN, Texas (AP) —Texas is ready to relax coronavius restrictions for the first time in months, Republican Gov. Greg Abbott announced Thursday, but bars remain closed indefinitely and a mask mandate is still in place following a massive summer spread that became one of the deadliest outbreaks in the U.S.

In allowing restaurants and gyms to let more people inside, as well as lifting a ban on elective surgeries and nursing home visits under certain criteria, Abbott said a dramatic drop in hospitalized COVID-19 patients has made it possible to begin easing restrictions put in place when new cases surged in June.

Texas has nearly 14,500 confirmed deaths from COVID-19, the fourth-highest in the nation, with the vast majority of those deaths occurring this summer.

“There are some Texans who want to fully open Texas 100% as if COVID is no longer a threat,” Abbott said from his office at the Texas Capitol, which has been closed to visitors for months. “The fact is COVID does still exist, and most Texans remain susceptible.”

In keeping bars shut for what is now two months and counting, Abbott said Texas must tread carefully. Aside from angry bar owners who have sued Abbott over lockdown orders, conservative activists and even some GOP lawmakers have railed against the governor of America’s biggest red state over a statewide mask mandate and business restrictions, and polls have shown his typically high approval ratings plummet.

Florida also abruptly closed bars in June as an outbreak spread through the South, but Republican Gov. Ron DeSantis began letting them reopen at 50 percent capacity last week. Bars remain under full closure orders in only a handful of other states, including Connecticut, which has one of the lowest infection rates in the country.

Under the new orders in Texas, restaurants and retail shops that until now have only been allowed to operate at half capacity can open up to 75% starting next week in most of the state. Nursing home residents will also be allowed to designate essential caregivers who will be allowed inside for visits.

The hard-hit Texas border is one of the few regions excluded from the relaxed rules because hospitalization rates there remain high.

“We’ve crossed the six-month mark of this crisis, and it’s no exaggeration to say that the next few weeks will make the difference between tens of thousands of businesses surviving the economic fallout, or being forced to close their doors forever,” the Texas Restaurant Association said in a statement.

Texas reported nearly 3,300 hospitalized COVID-19 patients as of Thursday, which is down nearly 70% from July’s peak. The percentage of tests coming back positive, which Abbott has previously described as one of the most crucial metrics in keeping tabs on the virus, has also plummeted into single digits. But Abbott on Thursday did not designate the infection rate as one of the criteria for opening, which follows weeks of local health officials raising doubts about the accuracy of Texas’ numbers amid a backlog of cases.

Democratic state Rep. Chris Turner, who leads his party’s caucus in the Texas House, said the announcement was notable for what Abbott left out.

“There was no mention of a contact tracing program, no mention of improving the state’s unreliable data and no mention of expanding Medicaid to increase access to health care for the millions of Texans who are uninsured,” Turner said.