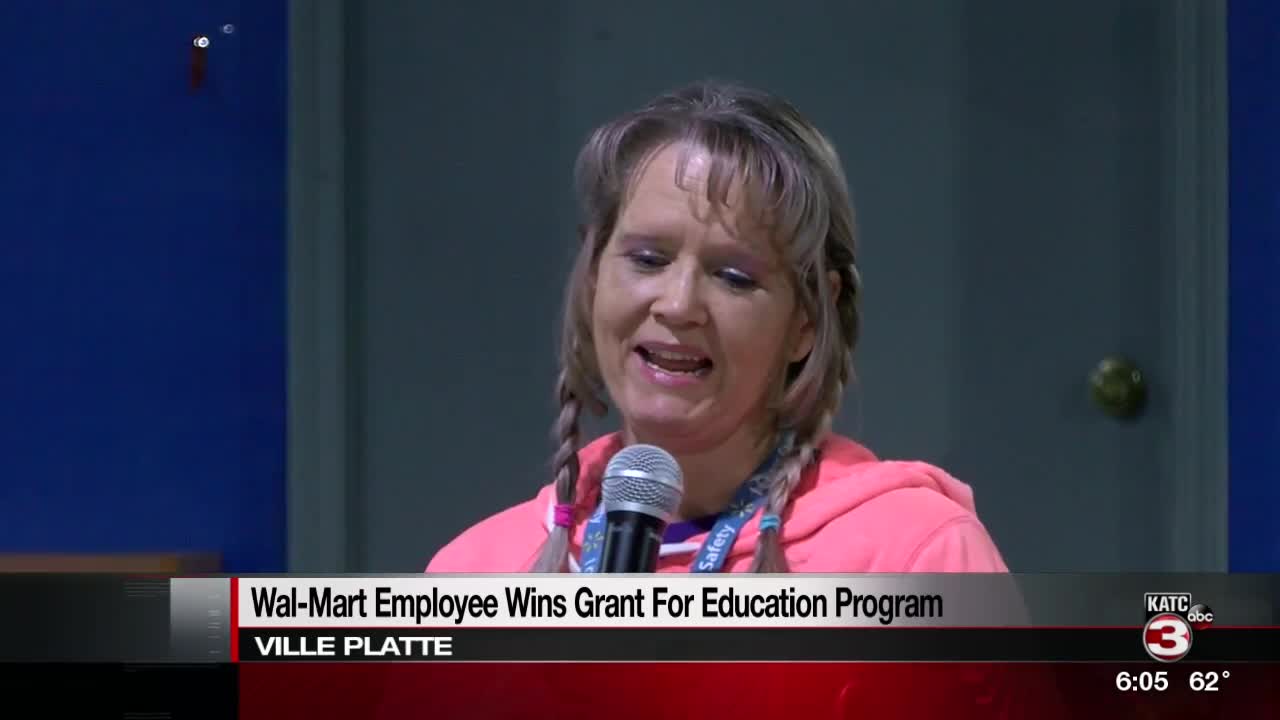 Opelousas Walmart Associate and Local Nonprofit to Receive Surprise Announcement Media invited to take part in surprise as associate's act of kindness results in Ville Platte School District - Jobs for America's Graduates Program receiving a $10,000 grant from Walmart What: On Monday, Nov. 18, Walmart will surprise a local associate with the news that her recent act of kindness won the Walmart Associate Challenge. As a result, her selected nonprofit, Ville Platte School District - Jobs for America's Graduates Program, will receive a $10,000 grant from Walmart. The Walmart-wide challenge asked associates to share how they are sparking kindness in their communities using #SparkKindness and #WalmartAssociateChallenge. Opelousas Walmart Distribution Center associate, Nicole Terry, is one of only 12 winners across the country. Nicole Terry teaches Zumba to Job for America's Graduates students after school and in the summer months to help encourage health and fitness, while also supporting other program activities. Job for America's Graduates Program is designed to identify students who face barriers to education, and to guide each one onto a successful path toward continued education, a meaningful career and a productive adulthood. In addition to Terry, Baton Rouge Walmart associate Grace Guy [tegpr.box.com] was also selected as one of the 12 winners across the country. Surprise: The Walmart associate and a representative from the nonprofit know that they are contest finalists. They believe they are coming to the store to make a video of their final pitch to Walmart.org in the hopes of receiving a grant in the coming weeks. However, we will surprise them with the news that they have won! Who: Walmart associate Nicole Terry and GM Assistant Phyllis Carrier Dianna Johnson, Ville Platte School District - Jobs for America's Graduates Program Lead Where: Walmart Distribution Center 3160 Highway 743 Opelousas, LA 70570 When: Monday, Nov. 18 9:30 a.m. - Media to arrive to be in place for the surprise. Report to front door and ask for Phyllis Carrier. 10:00 a.m. - Associate and representative from Ville Platte School District arrives to make pitch to panel Visuals: Surprise announcement with associate and nonprofit, interviews with store manager and representative from nonprofit Media Contact: Any media wishing to attend, please contact Andrea Morris, The Ehrhardt Group, amorris@tegpr.com, 504-906-9300. ### About Philanthropy at Walmart Walmart.org represents the philanthropic efforts of Walmart and the Walmart Foundation. By leaning in where our business has unique strengths, we work to tackle key social issues and collaborate with others to spark long-lasting systemic change. Walmart has stores in 27 countries, employing more than 2 million associates and doing business with thousands of suppliers who, in turn, employ millions of people. Walmart.org is helping people live better by supporting programs that work to accelerate upward job mobility for frontline workers, address hunger and make healthier, more sustainably-grown food a reality, and build strong communities where Walmart operates. To learn more, visit www.walmart.org or find us on Twitter @walmartorg. Andrea Morris Senior Account Executive The Ehrhardt Group 365 Canal Street | Suite 1750 New Orleans, LA 70130 504.369.3850 | office 504.906.9300 | cell www.tegpr.com [tegpr.com]

Nicole Terry is one of 12 associates in the nation to win $10,000 thanks to Walmart's Associate Challenge.

The challenge awards those who are making a difference in their communities.

Terry teaches Zumba to Job for America's Graduate's students after school and in the summer months to help encourage health and fitness.

Baton Rouge Walmart associate Grace Guy was also selected as one of the 12 winners from across the country.

Only the associates and a representative from the nonprofit Job for America's Graduate Program knew they were contest finalists. The finalists believed they were going to their Walmart store to make a video of their final pitch to Walmart.org in the hopes of receiving a grant.

Dianna Johnson from the Ville Platte school district and program lead for Jobs for America's Graduate's Program was also on hand for the surprise.

However, they were surprised with the news that they had already won.

"In Ville Platte, it's kind of a lower poverty and I know they struggle to send kids to Washington, D.C. and stuff like that. So I thought it would be great and give them a benefit," explained Terry.

Terry says she plans to continue to help the program with her winnings.