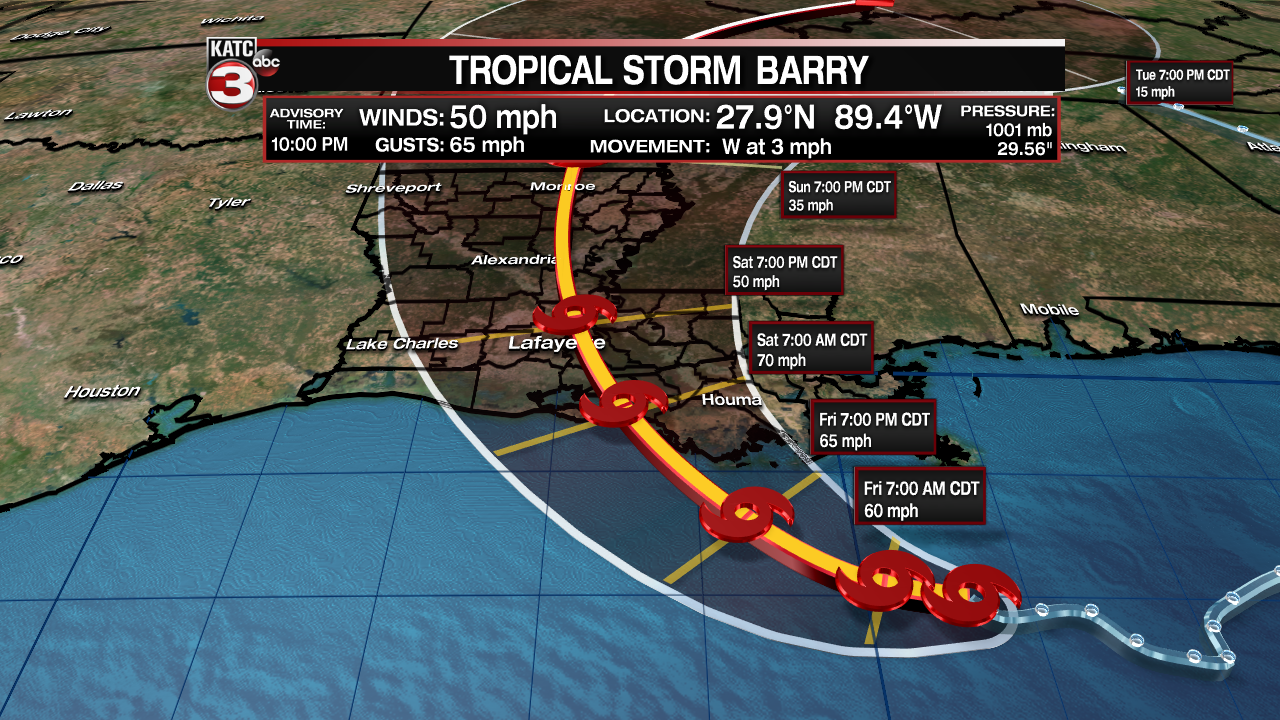 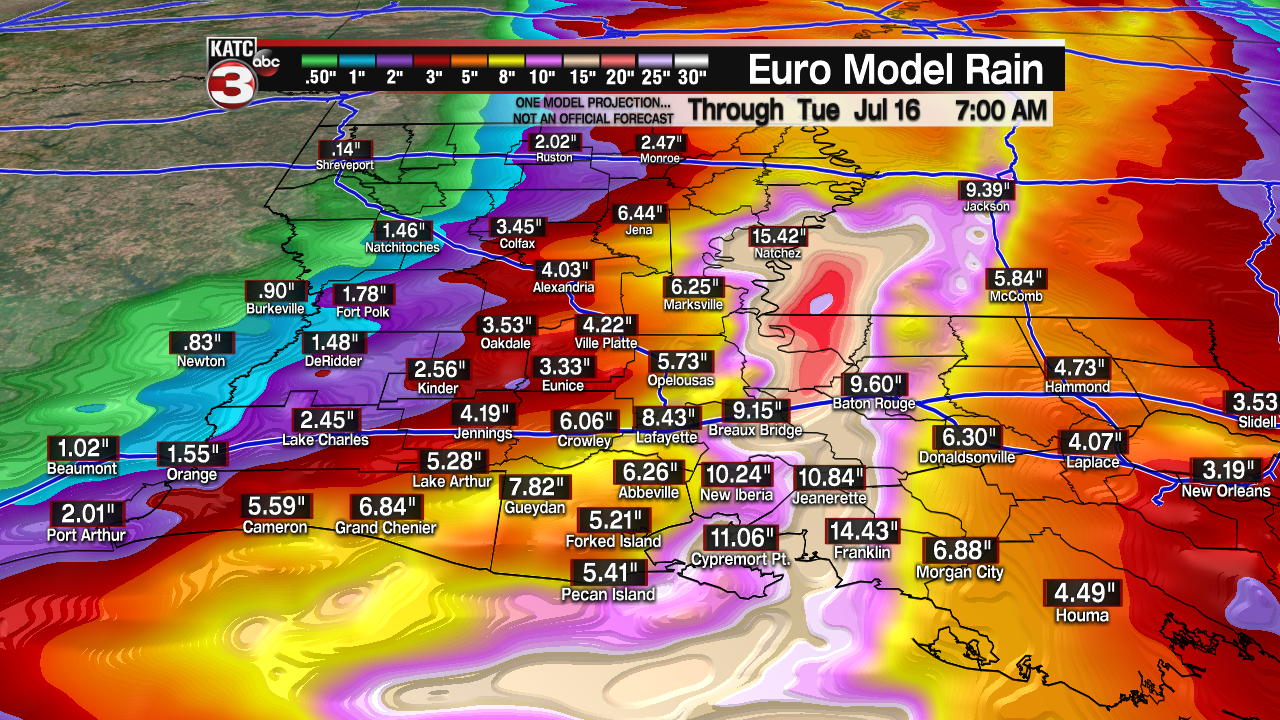 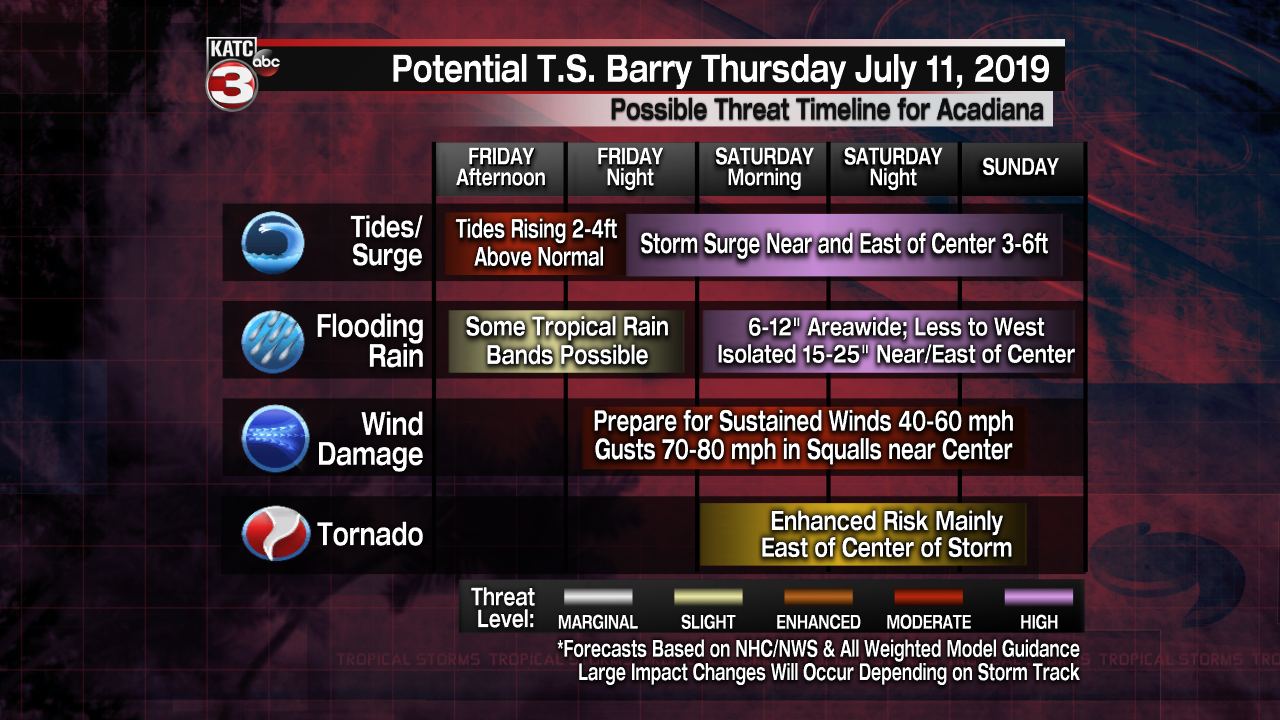 Tropical Storm Barry has slowly gained strength despite northerly shear, an influx of dry air from the north, and the absence of convection across the northern semi-circle of the storm.

Barry has been drifting westward at 3 mph and is expected slowly turn west-northwest Friday, then northwestward Friday night, making landfall near St Mary Parish during the predawn hours Saturday.

If convection (thunderstorms) remain on just the western and southern flank of the system through Friday, a more westward landfall by up to 30-40 miles could be possible.

For now, most computer models remain consistent and the National Hurricane Center's (NHC) forecast track has not wavered in its forecast track Thursday.

The intensity forecast of Barry brings it close to hurricane strength with 70 mph sustained winds, and becoming a hurricane briefly may still occur very near landfall...but either way, there is truly not much difference between a 70 mph tropical storm and a 75 mph hurricane.

Also new at 10pm Thursday, the Storm Surge Warning across most of the Eastern Louisiana Coast was extended westward through Intracoastal City.

The surge will be 4-6 feet from the mouth of the Atchafalaya River eastward, but due to slow movement of this system and the nature of our shallow subsurface coastline, it would not be surprising to this meteorologist if water levels might ultimately be a foot or two higher near and east of the center.

Finally, Acadiana should be prepared for sustained tropical storm winds better than 40 mph, and possibly up to 60 mph, especially toward St Mary Parish. Gusts could get as high as 70-80 mph in squalls near and on the eastern side of the center of the storm.

Prepare for 6-12 inches of rain Saturday into Sunday morning, with isolated spots possibly receiving up to 15-25 inches which could lead to catastrophic flooding for some, especially in the eastern Acadiana parishes into the rest of Eastern Louisiana. But flooding anywhere in Acadiana from Saturday all the way through Sunday morning will be possible with lingering tropical rain bands.

The worst of this system is expected most of Saturday into Saturday night, ending midday Sunday. See the current forecast timeline of tropical threats below...but remember there could be changes.

Nonetheless, stay with KATC, katc.com and KATC social media channels for the latest on any possible subtle changes, as they could make a very big difference in the weather conditions we night experience.

The 4:00 bulletin is in from the National Hurricane Center, the first thing that jumps out is that it is expected to land as a strong tropical storm/category 1 hurricane along the St. Mary Parish border heavily favoring the EURO model run. Do not get caught up in the intensity at landfall this is will still be a major rain and wind maker.

A Hurricane Warning extends from Vermilion Parish to Grand Isle along the coast, a Tropical Storm Warning is in effect for all of Acadiana, the north shore and New Orleans.

The Thursday afternoon round of model data has been streaming in to the weather lab, the first round of data to arrive since we've discovered where the center of circulation is located. There's a few notable changes to the model runs that would have impacts for Acadiana. Since we now have an actual named storm we'll start to get a little more consistency with the model tracks so the back and forth should slow down slightly.

We can start with the EURO model since it has proven to be taken the most into account when the National Hurricane Center is putting together their official forecast track. While the center intensity looks to be slightly less the track of the new EURO model seems to drift back west, with a Saturday morning landfall along Vermilion Bay.

This was the type of wiggle that we warned about earlier in the day since it will drag some of the heavier rain and stronger winds into Acadiana. If this scenario play out it puts central and eastern areas in a 8-12" range, western Acadiana likely 6-10". That being said the swath of heaviest rainfall, the 15-20" range with 25" hotspots, is right outside our doorstep so those heavy rains can easily drift west with a shifting storm.

Regardless of the numbers above flooding will be a major issue with this system, and the heavy rain looks like it may end up lasting through Saturday and even into the first half of Sunday. Drains/ditches need to be clear and gutters need to be clean to minimize the risk of flooding and roadways should be avoided. The rivers are currently running a little low but that being said they are going to take on a tremendous amount of water so river levels should be monitored closely.

A westward shift in the track would bring some of the stronger winds closer to central Acadiana, be prepared for tropical storm force winds starting Friday evening along the coast and spreading north through the night. Close to hurricane force winds will be located close to the center. Residents along the coastline need to make sure to check for and keep up with any mandatory evacuation orders. At this time make sure that outside furniture or anything that can be blown around is brought inside or tied down, expect power outages across portions of Acadiana. It's been a while since a storm like this has pushed through Acadiana so our vegetation hasn't been thinned out in a while, watch for falling trees and power lines.

Storm surge will be on the magnitude of 6-8 ft around the center of circulation, with a 4-6 ft surge for the western side of Vermilion Bay and the Vermilion coastline, so anticipate widespread coastal flooding. The tides will begin to rise on Friday afternoon and the surge will start to pick up through the evening. Once again residents who live along the coastline need to make sure that they are obeying all mandatory evacuation orders.

Thursday was the final preparation day, all preparations to your home need to be completed by Friday morning. Gusty winds and the possibility of scattered showers Friday afternoon will make preparation difficult and you don't want to put it all off until the last minute. As the storm unfolds Friday night-Sunday afternoon make sure that you have a place to receive information and updates. If your power or cable/satellite go out you can find us at katc.com/live during all our coverage, and stay up to date with all our social media pages.