Pellerin family: We filed suit because we have no answers 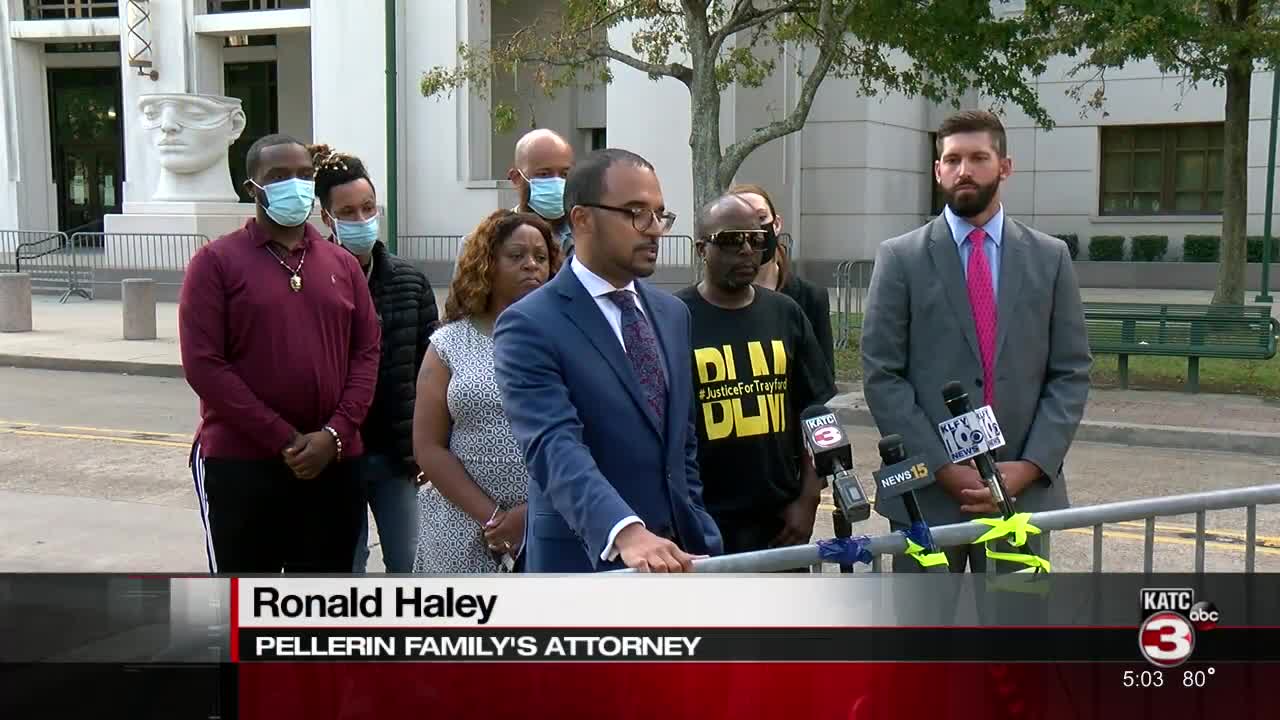 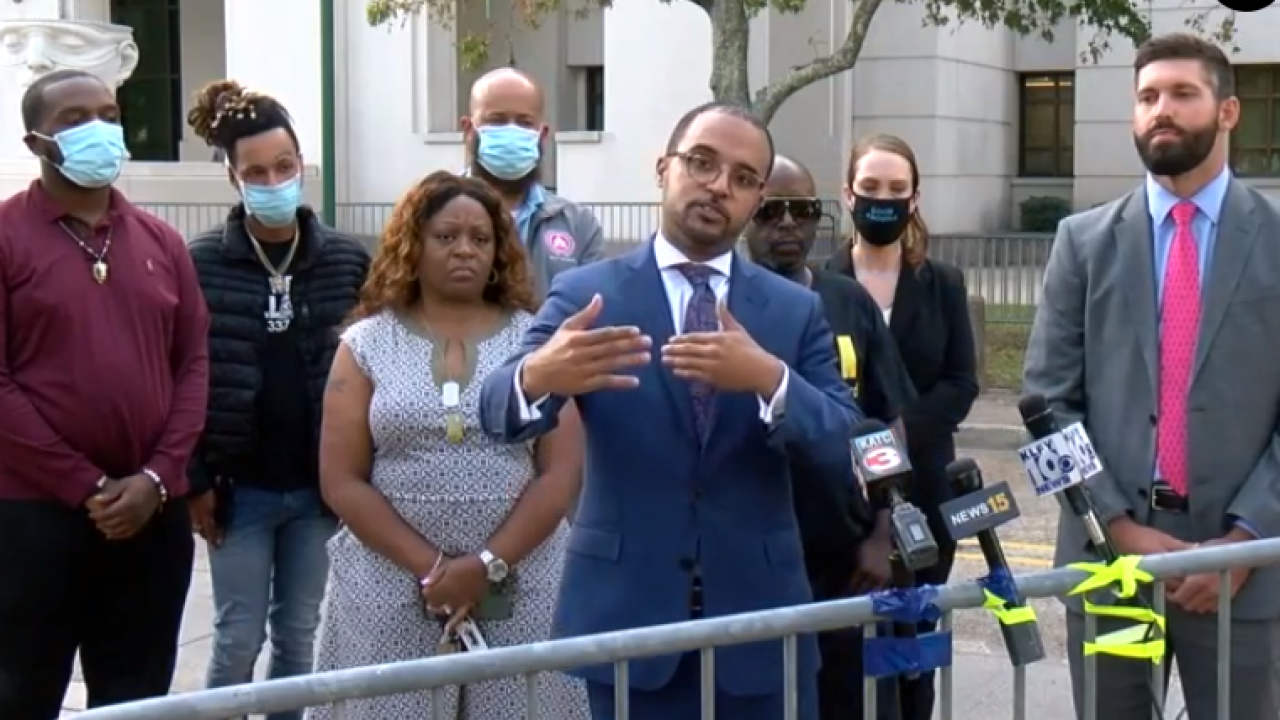 At a press conference this afternoon, their attorneys said the family didn't have any choice, because they have gotten no answers to their questions about what happened the night Lafayette Police shot their son to death.

"This is an important day for the Pellerin family. It's the first day they've been able to stand up and speak for themselves," said attorney Chase Trichell. "We have plenty of questions, but no answers. The family has been forced to do this today. This will enable the family, the community, the protesters, to get the answers that this family rightfully deserves."

Attorney Ronald Haley said the evidence that the family has seen, as well as the evidence his investigation has turned up, is enough to charge some officers involved with crimes. At this time, that is up to State Police, he said.

"One of the big questions that has not been answered is whether Trayford physically knife in his possession when he was shot," Haley said.

It is clear from the one body-cam the family viewed that Pellerin did not have a knife when the first police officer approached him, because his hands were empty, he said.

"We saw it. He put his hands up, and we saw that Trayford didn't have a knife. We also know from the calls to the LPD," Haley said.

Haley noted that the family has seen footage from one body-cam, but the team believes there are 40 videos.

"The notion that they are aware of what all occurred is not true," he said.

Haley said the family is not filing suit for money.

"We do no want another Trayford Pellerin to happen in Lafayette. The family does not want another Trayford Pellerin to happen in Louisiana. That's why they're standing here today; that's what the fight is about. It's not just about Tray, it's to make sure this does not happen to anyone else," Haley said. "And I believe if an example is made from this case and we can make change, not just in policy but in public perception as to what the relationship between law enforcement and the community looks like, that is change and that is the justice that we seek."

The family does not believe that lethal force was required against their son, Haley said.

"He did not have to die. From what we were able to see, and the evidence we have independently sought out, that rings true," he said.

In response to a question about the officers' side of the story, Trichell said the family is "all ears."

"The only reason we're filing this lawsuit is because of a lack of transparency," he said. "If anyone wants to tell their side of the story, we're all ears."

A live view of the press conference is below:

We reached out to LCG, and a spokesman said there would be no comment on the suit at this time.

The suit gives a lot of detail of the incident that ended with Pellerin being shot to death by Lafayette Police Officers, and differs from the information released thus far.

Also in the suit, Pellerin's parents allege that he was handcuffed before first aid was administered, and that 13 minutes passed before he was transported via ambulance to a hospital where he was pronounced dead.

The suit names the officers on the ground that evening when Pellerin was shot and killed by Lafayette Police, as well as the watch commander and field commanders.

It does provide additional details about the incident which police have not released.

Here's the way the suit describes what happened:

The complaint arose from four (4) calls to the Lafayette Police Department. Three calls were made by an unidentified Circle K store clerk directly to the LPD— not 911— indicating a non-emergency.

One call was made to 911 by an unidentified woman who was parked at the aforementioned Circle K. 7. The first call to LPD was at approximately 6:45pm. The caller indicated that a black male wearing a white shirt, later identified as Mr. Pellerin, was inside the Circle K acting weird and “spooky.” The caller told the LPD that she thought he might try to steal something; however, the caller offered no other specifics. The caller did not state that the black male had or was brandishing any weapon, nor did the caller say Mr. Pellerin had threatened, assaulted, or physically and/or verbally confronted the caller or any other person.

Around 10-12 minutes later, the same clerk again called directly to the LPD and asked if an officer was en route because the same black man was bothering customers; however, once again, the caller offered no other specifics. Specifically, the caller did not state that the black male had or was brandishing any weapon, nor did the caller say Mr. Pellerin had threatened, assaulted, or physically and/or verbally confronted the caller or any other person.

Shortly after that call, the unidentified patron, who was parked at the Circle K, called 911. The patron indicated that the black man was in the parking lot of the store. When the dispatch operator asked if he was threatening/attacking anyone, the patron said “no.” The patron did indicate that she saw the black man put a knife into his bag/satchel and then threw his plastic cup and its contents on the pavement of the parking lot. This patron did not state that the black male brandished the weapon or even displayed it to anyone else, nor did the caller say Mr. Pellerin had threatened, assaulted, or physically and/or verbally confronted the caller or any other person. The caller did not describe the knife as large, sharp, or being wielded in a menacing manner.

At approximately the same time of the 911 call, the store clerk called back to the LPD and gave a similar account as the patron in the parking lot. The clerk did not state that the black male brandished the weapon or even displayed it to anyone else, nor did the caller say Mr. Pellerin had threatened, assaulted, or physically and/or verbally confronted the caller or any other person. The caller did not describe the knife as large, sharp, or being wielded in a menacing manner.

The only information that LPD received about a knife when responding to these calls was that the black male had placed it in his satchel/bag and was not carrying it in his hands or threatening anyone with it.

All calls lasted less than a minute and a half and ended when Defendant John Doe #1 arrived at the Circle K.

The police officer dispatched to the first complaint was told it was a "disturbance," the suit alleges. Before he arrived at the Circle K, the suit alleges, that first officer didn't have any call or complaint that Pellerin threatened anyone, and there was no call to police mentioning that he had a knife.

When that first officer saw Pellerin walking away, he told Pellerin to stop and come to his vehicle. Pellerin put both his hands in the air, and had no weapon. The officer didn't tell him to put down a weapon. But Pellerin turned around and started walking away, toward a motel where he was staying, the suit alleges.

The officer began to chase Pellerin across the Thruway, and about 90 seconds later he pulled out a taser and aimed it at Pellerin, who turned to face the officer but continued to walk backwards, the suit alleges. The officer told him to stop but did not say anything about a knife or a weapon.

The officer fired the taser at Pellerin but missed, the suit alleges. Pellerin continued to walk away. The suit alleges Pellerin never threatened anybody, and actually slipped and fell twice as he was walking away, giving officers more opportunity to stop him.

"While following Mr. Pellerin on foot, he was only observed walking—never running or trying to escape and hide. Defendants John Doe #1-#4 could have deployed multiple deescalation/non-lethal force tactics such as: pepper spray, rubber pellets, additional tasers, clubs, vehicular intervention, or the K-9 that was present and available. Additionally, they could have requested assistance and collaboration from other law enforcement agencies but chose not to do so," the suit alleges.

The suit alleges that, based on which officers have been placed on leave, it was John Doe #2, #3 and #4 who fired the 10 bullets at Pellerin, one of which killed him.

The suit also provides statistics about the LPD, stating that between 2010 and 2019, statistics published by LPD show 1,172 use of force reports submitted by LPD officers, equating to one approximately every three days.

"In this same time period, data published by LPD show a pattern, custom, and practice of excessive use of force, including improper use of lethal force. According to their own statistics, between 2010 and 2019, there were 107 civil lawsuits filed against LPD," the suit alleges.