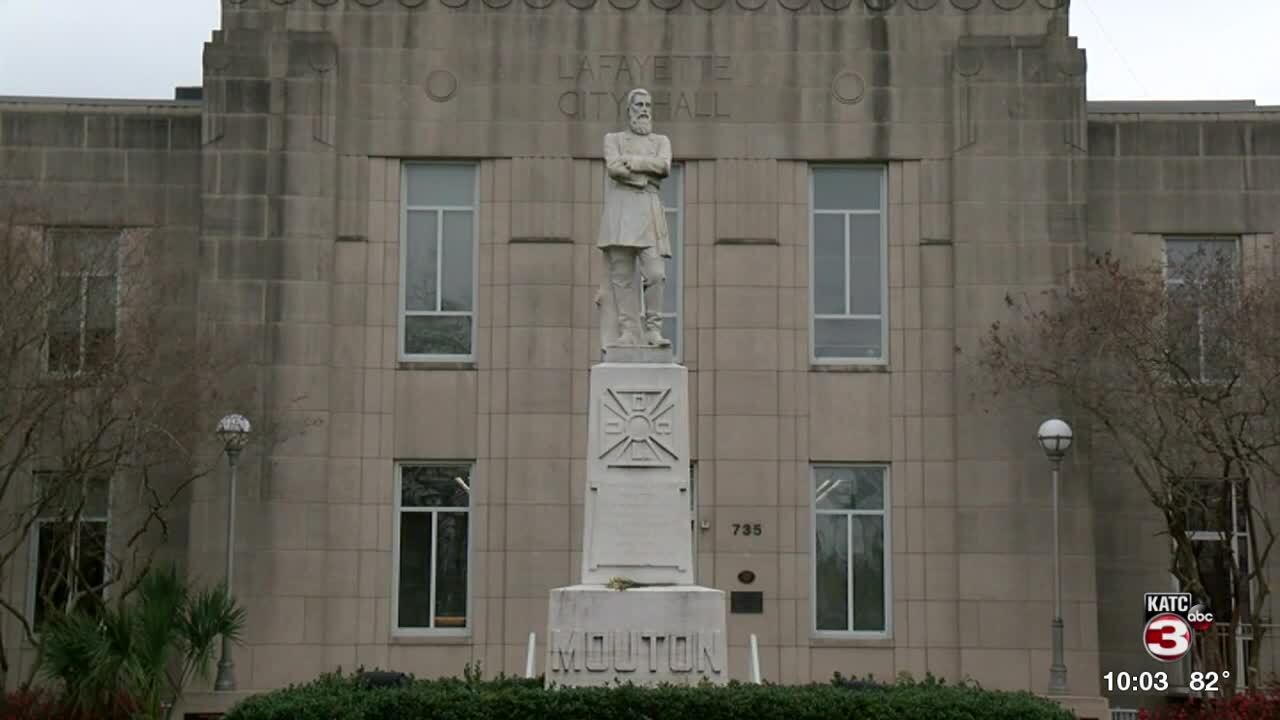 As news broke Wednesday evening that LCG is beginning the process to remove the statue of Confederate General Alfred Mouton from where it has stood in Downtown Lafayette for nearly 100 years, residents and organizations responded with mixed reactions.

An organization called Move the Mindset has been at the statue every day over the last few weeks silently protesting the statue. Several members were at the statue Wednesday night celebrating and tell KATC that the moment has been years in the making.

Francesco Crocco, co-founder of Move the Mindset, said, "We want to see it moved, and we said this five years ago. We wanted it moved to a museum. We have no intention of destroying the statue, but we do not want taxpayers paying for a controversial symbol, dating back 100 years, of white supremacy."

Members of Move the Mindset say the Mayor-President's announcement is only the first step, and they will be watching to see what comes next.

Several other residents visited the statue Wednesday after the news broke to take photos with it. Some who spoke with us didn't want to be on camera, but said they think a part of history is being removed.

One resident said, "History isn't being destroyed, it's actually being added to that our mayor recognizes the community, can see a vision of it going forward to put up symbols that aren't as divisive as the ones that are currently here."

Meanwhile, the group "WHY NOT Alfred?" released a statement on Facebook, saying they do not support the Mayor-President's announcement, and they are prepared to defend General Mouton. They called on their supporters to "stand united and not falter."

The group also hinted at a potential legal challenge, saying they will keep supporters up to date on any court hearings.

The organization says they are pleased that he has put the removal process in place and will hold him accountable until the statue is removed from city property.

President Marja Broussard encouraged members of the council to discuss the plan in a public forum and to be proponents of the effort.

"As we move forward on this issue, the NAACP commends Mr. Fredrick Prejean, Move the Mindset and all of the groups and citizens who have worked to move the statue. We will continue to monitor this situation and support all efforts to move this process as expeditiously as possible."

Read the full statement below:

We are pleased Mayor Josh Guillory has put in place a process to remove the Mouton Statue from downtown Lafayette. We will hold Josh Guillory accountable to have this statue removed from the City of Lafayette property.

We further applaud his recognition of the racists purpose of this Confederate statue. Efforts to locate a private location or museum location for this symbol from a racist time in the history of Lafayette should move with speed.

As the LCG attorneys move forward we would encourage councilman Glenn Lazard, who has a discussion item on the council agenda Tuesday, to discuss details in a public forum, for the need for this removal and further discussions on the processes necessary to have the statue moved.

As we move forward on this issue, the NAACP commends Mr. Fredrick Prejean, Move the Mindset and all of the groups and citizens who have worked to move the statue. We will continue to monitor this situation and support all efforts to move this process as expeditiously as possible.

We further implore council woman Liz Hebert to not be an opponent of this action, but work to make our community a better place for all citizens and embrace the change that is happening across the United States of America and the world.

We understand a court hearing in August will be the deciding factor in how we move forward and ask all citizens to be at the court house on August 17th.

Additionally, the City Council of Lafayette will have to pass the appropriate ordinance to finally move the statue.

The story of the Mouton statue dates back nearly 100 years. The United Daughters of the Confederacy erected the statue on April 8, 1922, on land previously owned by Mouton. 17 years later, a City Hall was built on the property. Fast forward to April 1980, city leaders announced they would move the Mouton statue to the current City Hall on St. Landry Street.

The Daughters of the Confederacy sued to block the move. Two months later, a district judge issued a permanent injunction barring the city from moving the statue. In 2016, the current movement to remove the statue began.

At that time, supporters of keeping the statue vowed to take LCG to court if they attempted to move it. Last year, members of Move the Mindset, a group that grew out of the 2016 movement, sued to have the statue removed. That case is now pending in district court.