Calcasieu Parish D.A. allows some defendants to pay their way out of community service 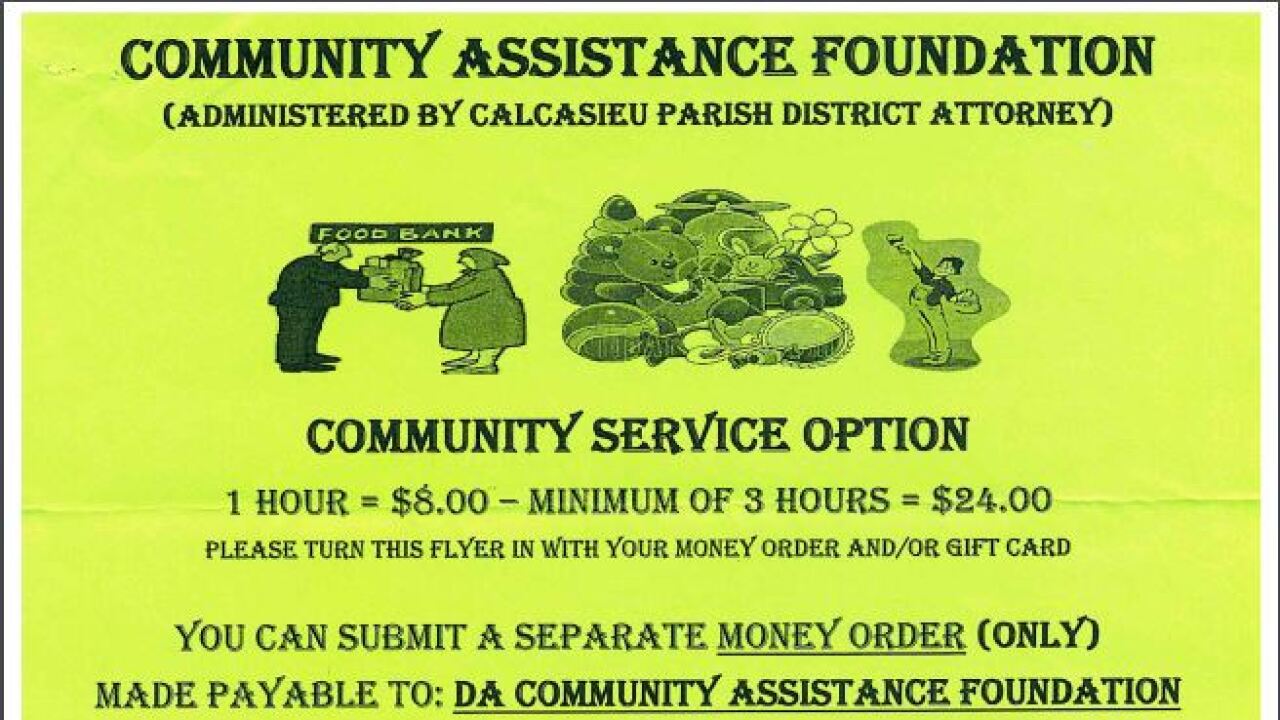 LAKE CHARLES, La. — This story, which KATC originally broke in October, is now being reported by the Washington Post. Read that here.

Hundreds of thousands of dollars worth of gift cards have funneled through the Calcasieu Parish District Attorney’s Office via programs that allow certain defendants to buy their way out of court-ordered community service.

The gift cards are given to a non-profit that was started by the district attorney himself; the organization then distributes them to charities and charitable causes.

Former employees have come forward with allegations that the gift cards were not properly documented and dispersed, and some in the legal community question whether the practice of allowing defendants to buy their way out of community service is fair.

KATC's full on-air coverage of this story can be found below.

In Calcasieu Parish, if someone is found guilty of a misdemeanor crime by a judge and is sentenced to community service, they are given the option of purchasing gift cards instead of having to pick up trash or attend classes.

A flyer for the program was even printed and sent to KATC Investigates, which shows what amount of gift cards can be exchanged by an offender in order to pay off their community service hours.

The gift cards are given to a non-profit called The Calcasieu Parish District Attorney’s Community Assistance Foundation.

KATC Investigates found records that show the gift cards are then donated to churches, charities and even schools with the stated goal of helping underprivileged children, particularly around the holiday season.

However, some former employees of the district attorney’s office claim it is not what it seems and say they believe some of the gift cards never made it to those charities.

Jenny Odom worked as a secretary in the district attorney’s misdemeanor probation office until she resigned in 2015 after facing what she described as a hostile work environment that arose after she started asking questions about the gift cards.

“It’s absolutely not fair to those children, or to the public, knowing that these funds are not being used in the way they were assigned to be used. It’s a lie. It’s cheating,” said Odom.

“There was no documentation,” adds Odom. “There was no accounting for it. I don’t even think they realized how much money they were collecting.”

Odom and another former secretary, McKenzie Newman, claim they saw hundreds of thousands of dollars in gift cards go through their office without proper record keeping.

“It was a mess,” said Newman. “It was really difficult to keep up with the gift cards.”

Newman said she was fired from the district attorney’s office in July 2019 after complaining about a number of issues in the office, including the gift cards. She has filed a complaint with the U.S. Equal Employment Opportunity Commission over her termination.

“I also ran financial reports each day for all the funds we take in, because our defendants pay enrollment fees, supervision fees and things of that nature,” said Newman. “And I would do an expense report at the end of the day and turn that into payroll and accounting, but I was told specifically that gift cards were not to be included in that.”

The district attorney’s office seems to confirm this in a response to a public records request made by KATC Investigates, which states:

“With regard to disbursements prior to 2016, during my continuing investigation into what documents are available regarding these programs, I have not found any documents in our possession, which would respond to this request.”

KATC Investigates obtained financial records from the district attorney’s non-profit, which show the organization has given out more than $280,000 in gift cards to charitable organizations and causes since November 2015.

But this practice of buying gift cards to avoid community service had been around for years before the non-profit was incorporated in 2015.

The district attorney’s office is unable to produce records accounting for how much came in and how those gift cards were distributed prior to 2015.

DeRosier said that’s why he first started allowing defendants to donate Christmas gifts in lieu of performing community service. Later, he allowed them to buy gift cards because he said they had too many toys and not enough room to store them.

“Up until 2015, the gift cards and Christmas toys were being handled by the misdemeanor probation department downstairs,” said DeRosier. “I had an audit done by a CPA firm to determine what we had in gift cards, and I was concerned because we had a significantly large amount in gift card value.”

DeRosier says the audit is what led him to create the non-profit.

KATC Investigates has requested a copy of the audit mentioned by DeRosier, but the custodian of records for the DA’s office told KATC that it was his impression that what DeRosier was referring to was a “verbal audit.”

In response to our public records request, the custodian of records wrote: “I was informed this was an informal accounting that merely expressed the value of gift cards currently in possession of the District Attorney’s Office and that no formal report was submitted to our office.”

There is still the question of records from before the non-profit was established.

KATC Investigates filed public records requests for the organization’s financial records since 2011, specifically records of the gift cards that came in and how they were distributed.

In response to our request, the district attorney’s office said that gift card receipts can only be found in each individual defendant’s file, which is not readily available and would be an “overly burdensome” request.

As for disbursement records that detail how the gift cards were distributed, the district attorney’s office cannot find any documents in their possession that would respond to the request.

KATC reached out to several judges in the 14th Judicial District for comment on our investigation. Only one judge responded and agreed to give a comment on the condition that his name not be used.

He acknowledges that the district attorney supervises the misdemeanor program. But, he said he only heard about the gift card program in the past few weeks.

When asked if he was effectively changing a judge’s order, DeRosier said, “I think a judge assigns people to us to handle their probation as we see fit. We can let them off if we want to.”

“If I were a judge, I’d be very unhappy about this,” said Tommy Guilbeau, a Lafayette defense attorney who has been practicing law for more than 50 years.

Guilbeau said that he had never heard of anything like this before in his career as a lawyer.

“It is outrageous,” said Guilbeau. “We should be offended. The public should be offended that you know, you’re telling people with money you can buy a gift card and give it to our program. It’s wrong. There’s no upside to doing that.”

The gift card exchange and the District Attorney’s Community Assistance Foundation is a point of pride for DeRosier.

“This program has benefited people, it's benefited a lot of worthwhile organizations,” said DeRosier, who stands by how the program has been managed over the years. “Every dime that has been collected has been accounted for. I’m going to keep doing it.”

DeRosier questions why, after all these years, the programs are facing scrutiny.

“I’m going to leave that to the public to decide the motivation of former employees who are critical of this program,” he said.

However, both Odom and Newman said they regret not coming forward sooner.

“In this position that I was put in, I feel like I have an obligation to speak up for the other employees that I used to work with as well who are still at that office who are petrified and terrified of speaking,” said Newman. “I feel like it’s my duty, my obligation to do that, because they are good people, they love their jobs just as I did and they don’t have the opportunity to speak out.”