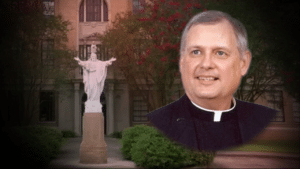 Msgr. Robie Robichaux, the high-ranking priest who was removed from his position as Judicial Vicar and placed on leave earlier this month, is facing more allegations of sexual misconduct.

KATC has spoken with a second woman, who met Robichaux in 1975 when she was a senior in high school and Robichaux was a deacon.

“We became friends through choir at St. Peter’s Catholic Church in New Iberia,” she said.

The woman, who KATC has agreed not to identify, says she was either 17 or 18 years old when the sexual contact began.

“I was in no way a mature adult, I was so taken by him,” she said. “I think I was taken advantage of, certainly with all the sexual stuff.”

The woman says she has reported her story to the Diocese of Lafayette after seeing last week’s reports about Robichaux.

“I wanted (the other victim) to know that she wasn’t alone,” she said. “I’m mature enough in my life now to know that this was the moral and ethical thing to do.”

The Diocese has released this statement following our request for more information:

“Following Bishop J. Douglas Deshotel’s call for other victims to come forward, a second adult woman has contacted the Diocese of Lafayette, alleging inappropriate sexual contact with Robie Robichaux.  The alleged victim indicated that she is unsure whether or not this contact began occurring before or after she became an adult.  The Diocese became aware of the allegations when the woman reached out to us on Friday, October 12, 2018.   The woman claims the contact occurred during the approximate time period of 1975-1985.    Bishop Deshotel is once again urging anyone with knowledge of sex abuse of a minor to come forward to authorities and to the Diocese of Lafayette.”

Last week, Deshotel held a brief press conference to address the fact that Robichaux had been placed on leave.

For 24 years following an accusation of sexual abuse, Robichaux continued to serve in ministry and has even held a high rank in the Diocese of Lafayette. The first victim claimed she was abused by Robichaux starting in 1979 when she was 16 years old and told the church on at least three different occasions. Robichaux has been removed from his position as Judicial Vicar and placed on administrative leave, according to a letter sent to members of clergy.

Since no questions were taken at the bishop’s press conference, we submitted questions to the diocese – as the diocese requested – that afternoon. To date, not one of those questions have been answered, and despite our having asked repeatedly for a status of responses we’ve received nothing from the diocese.

Our investigative team did some digging on our own, in order to determine where Robichaux worked in the diocese.

According to the Official Catholic Directory, in 1977, Father Robie Robichaux began serving the church at St. Genevieve in Lafayette. His duties continued until he was transferred to St. Peter’s in New Iberia in 1979.

That’s the year of the alleged abuse of a then 16-year-old girl.

In the 80’s, Robichaux spent time at St. Joseph’s in Iota. He was there for two years and then Sacred Heart of Jesus congregation and St. Cecilia School in Broussard.

In 1989, Robichaux left Acadiana for graduate studies in Washington D.C.

Bishop J Douglas Deshotel said, “These allegations were first reported to the Diocese in 1994.”

One year later, Robichaux was placed on special assignment for the Office of the Tribunal in Lafayette.

Robichaux is most known for his time as Pastor at St. Mary’s Catholic Church. A position he was appointed to in 2000. In 2008, Robichaux transferred to St. Leo the Great serving the church and St. Leo Seton School.

That’s where the records end. The full list of Monsignor Robichaux’s history is part of our pending questions with the Diocese.

CLICK HERE for our previous story on allegations made agains Msgr. Robie Robichaux