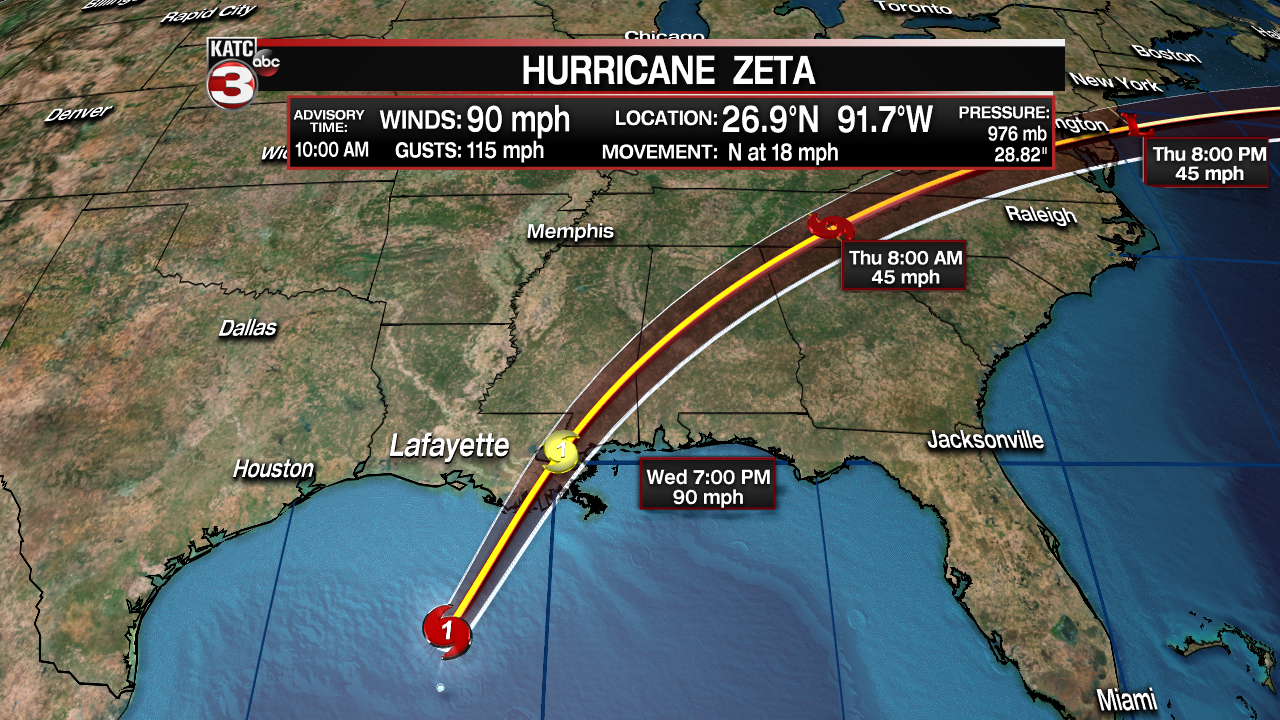 The intensity of Hurricane Zeta seems to have leveled off a little bit and while it may pick up a little more strength it appears as if it will hold just below Category 2 criteria, this should not take away from the seriousness of the storm.

As the track drifts to the east a little it further pulls impacts away from Acadiana and based on the current position of the center will pull the corridor of the strongest winds along the eastern coastline and into Gulfport, Mississippi.

There may be a few rain bands that come up along through Acadiana but for the most part the worst of the weather will be well to the east, with some gusty, wet weather in the southern half of St. Mary Parish.

Notice in the above graphic how tight the gradient is as you go east toward the center of the storm, and how wide it gets east of the center which would indicate that the majority of the wind will be on the eastern side of the storm.

There's a lot of model data which would support this which is why the tropical storm watches have been removed for Acadiana, and why our impacts should remain minimal despite our proximity to the storm.

This is different, if you recall, from the way Hurricane Delta was set up which had the strongest winds to the northwest and a prime example why we preach that every storm is different.

At it's current trajectory the storm will bring the worst storm surge along the Mississippi coastline with 6-9 feet of surge possible between the Louisiana/Mississippi border and Pascagoula which is just before the Alabama border.

Acadiana's coast will see tides running a foot or two higher but nothing substantial or out of the ordinary, that won't be the case along the entire Louisiana coastline though as a 5-8 foot surge is expected from Port Fouchon through to the border.

So far every parish in the state has been under some kind of tropical warning at least once, and two more storms have not directly made landfall here but have impacted Louisiana and at some point in time had us in the cone.

I bring all this up because it's apparent that tropical fatigue is setting in and while that is completely understandable we have to stay vigilant until it's clear we're done with these storms.