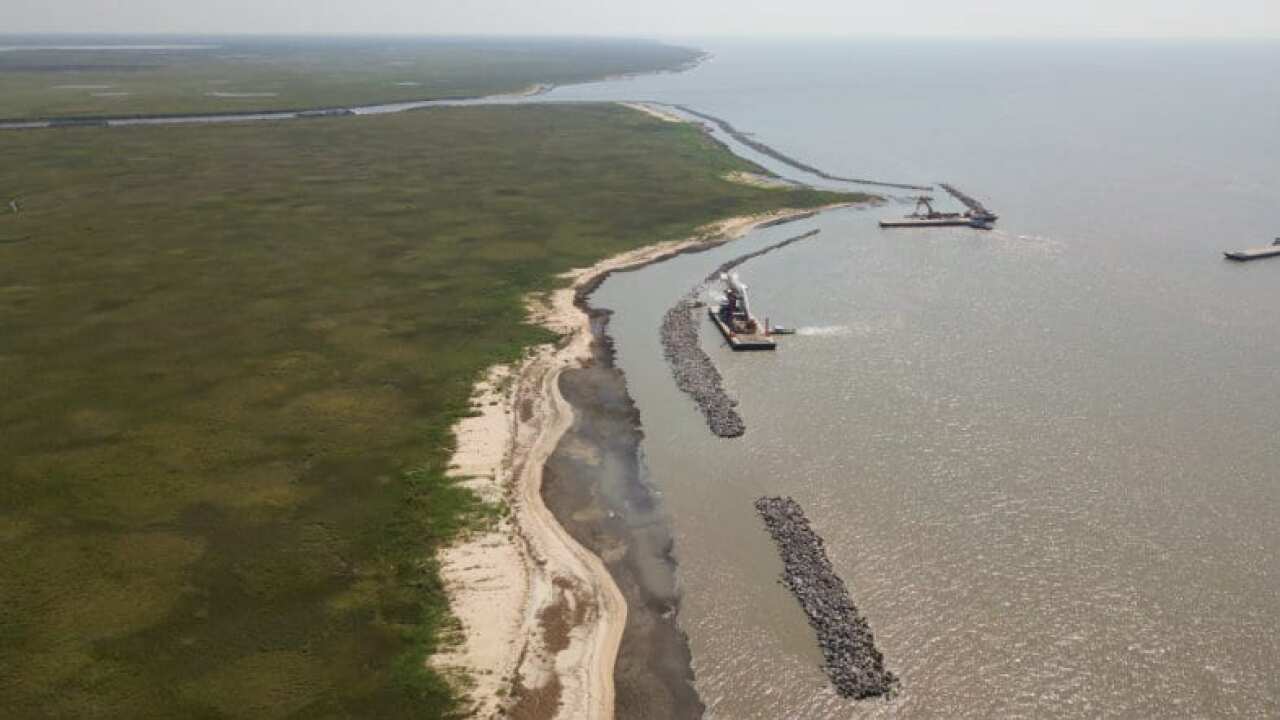 The America's WETLAND Foundation (AWF) kicked off its Sea Safe Community Certification initiative in Cameron, Louisiana this week, citing the community as a model for adaptation to the new normal of sea level rise and an anchor community for program consideration on the Gulf Coast along with the Florida Keys.

In a roundtable discussion that included elected officials, coastal experts, and industry representatives, an invited group of participants drilled down on how to keep home values up and negative stigma down in areas at high risk of sea level rise and other climate impacts.

According to flood inundation maps released by the real estate website, Zillow, close to one trillion dollars in real estate will be lost in America if seas rise six feet and, in a startling report released by Climate Central, sea levels are projected to rise one foot by the year 2030.

Valsin Marmillion, managing director of AWF, said, "A one-foot rise in only slightly more than a decade will have an incredible impact on Louisiana and coastal areas like Cameron. Taking actions to adapt to this projection is critical. We at the Foundation do not believe retreat is the answer. Instead, we advocate for living with water and building with nature as a formula for sustaining coastal communities and environments facing rising seas and salt water intrusion which destroys coastal lands."

In a presentation to the group, Marmillion cited that the majority of residents in Louisiana and in coastal regions around the country have their life savings tied up in their homes. "The stigma associated with high risk communities vulnerable to sea level rise, stronger storm events, and even nuisance flooding can begin to bring down home values. We are committed to help Gulf coast communities avoid this possibility by taking specific actions to adapt to what we call the 'new normal,' that can preserve cultures, jobs, and ways of life we all hold dear," Marmillion said.

Rick Johnson of Entergy, whose company provides electrical power to the region, said, "The work we are doing today can impact all of us along the Gulf Coast. It's all about adaptation. As a company, we are always in the process of strengthening our infrastructure. We want the communities we serve to have reliable power and we're investing heavily to make sure they do."

Sidney Coffee, AWF senior advisor, said, "Sustaining our ecosystems to support our economy holds the key to restoring nature's defenses. The new FEMA flood maps that will come out early next year promise to impact the insurability of coastal communities and adapting to ways to keep local economies strong and growing is an intended outcome from sessions like these."

"Communities that fail to act and adapt to sea level rise, face the growing threat of reaching a tipping point when the perception of risk turns home values upside down. If real estate values decline and investments diminish, the tax base for basic services becomes depleted and what follows is obvious," Coffee said.

Cameron was all but devastated during Hurricane Rita and residents have worked for years to bring back the community. Since Rita, Southwest Louisiana and its leaders have made tremendous strides to build resiliency into governance and private sector growth.

In 2011, AWF and Entergy hosted a series of Blue Ribbon Community Leadership forums that explored how coastal communities need to change to keep their areas prosperous and safe into the future. Southwest Louisiana was a key focus of those hearings and the roundtable on November 6 in Cameron focused on the progress made since then.

Marmillion said, "We return to Southwest Louisiana and specifically to Cameron with the next phase of our work - the Sea Safe Community Certification program - to encourage a new era of innovation and solutions. Ideas to match the challenge of rising seas will flourish with ways to prevent retreat from the communities we love and the homes that hold our investments."

"In places like the Chenier Plain across this region and into Texas, with a diverse population and equity ladder, adaptation helps everyone - those who can't afford to lose their home values and those who depend on government services to provide security and protection along with education and health care," Marmillion said.

AWF is developing an axis of coastal communities for the Sea Safe program - Louisiana and Florida are two very different ecosystems but with the same climate challenges facing all coastal communities. "Demonstrating that we can build with nature and live with water by elevating our homes, considering floating communities, aligning government codes with adaptation strategies, enhancing tree canopies and native plant life, finding new ways to store water with places for water to go instead of in our homes, and thinking about things in a different way will open us to new and better ways to adapt to what is truly a new normal," Marmillion said. "These two regions can serve as models for adaptation nationally as we prepare to live differently with imminent and certain changes."

As communities show progress in developing a comprehensive adaptation plan and take actions to ensure their ability to adapt in the face of rising seas, AWF will brand them a Sea Safe Certified Community and help them communicate the actions they are taking, making sure business and industry investors and homeowners see they are limiting sea level rise vulnerability and telegraphing that they are open for business and here for the long term, thus avoiding the negative stigma of an at-risk community.

AWF gathered knowledge and information from the group in Cameron on things that work and don't work as they continue to recover and rebuild and fortify their community. State Representative Ryan Bourriaque, a 6th generation Cameron resident, said, "Disaster recovery funding is not designed to expedite recovery and disasters know no income."

Kevin Savoie, of the Louisiana Sea Grant program, said, "We have a unique community here. Many people do seasonal work like growing things at certain times of the year, fishing or shrimping at other times or raising cattle. We have always helped each other. That's what ties a community together."

In keeping with that notion, Claire Marceaux, Cameron Parish Port director, said, "Economic diversification is so important. We've been able to be successful at a lot of different things. If other communities are not as diverse, it may be harder for them to adapt to changes."

Darrell Williams, of the Cameron Parish Police Jury, said, "It cost a lot to raise the level of my house after Hurricane Rita but it means that my house will no longer flood and I won't have to keep filing insurance claims. It has increased the value of my home, not reduced it. It's much more efficient to do adaptation than to do what FEMA says, which only brings you back to where you were, not to where you need to be to adapt for the future."

AWF supports the notion that the "new normal" will require a belief system that respects the power of nature to carry us into future prosperity and equity for society, our economy and the environment. It's not a bad proposition to, in turn, be able to salvage one's home value, community and culture for enhancing the environment that has allowed America her greatness.

A similar meeting is scheduled by AWF on November 14 in Key West, Florida. The Foundation has been working with local residents on prospects to achieve the Sea Safe Community Certification. Marmillion serves on Florida's Monroe County Climate Change Advisory Committee, which is in the process of completing a second five-year adaptation plan for the Keys.

The new program in Louisiana will operate in tandem with the AWF's recently announced Louisiana Coastal Exchange, designed to register coastal restoration and protection projects that require funding and encourage private sector financial support to implement the projects as part of a company's or foundation's corporate social responsibility to reduce carbon footprints or assisting communities where they operate. AWF has completed three such projects contiguous to the Gulf Intracoastal Waterway, which it sees as a line of demarcation for saltwater intrusion that destroys freshwater marshes and natural habitats, removing the natural protection provided by healthy wetlands.

AWF will soon release information on the growing coalition of research institutions that will help ensure the foundation of the Sea Safe Community Certification program. Plans call for inviting participation in the program by Gulf and East Coast communities vulnerable to the rising tide, following a process of demonstrations in several communities.